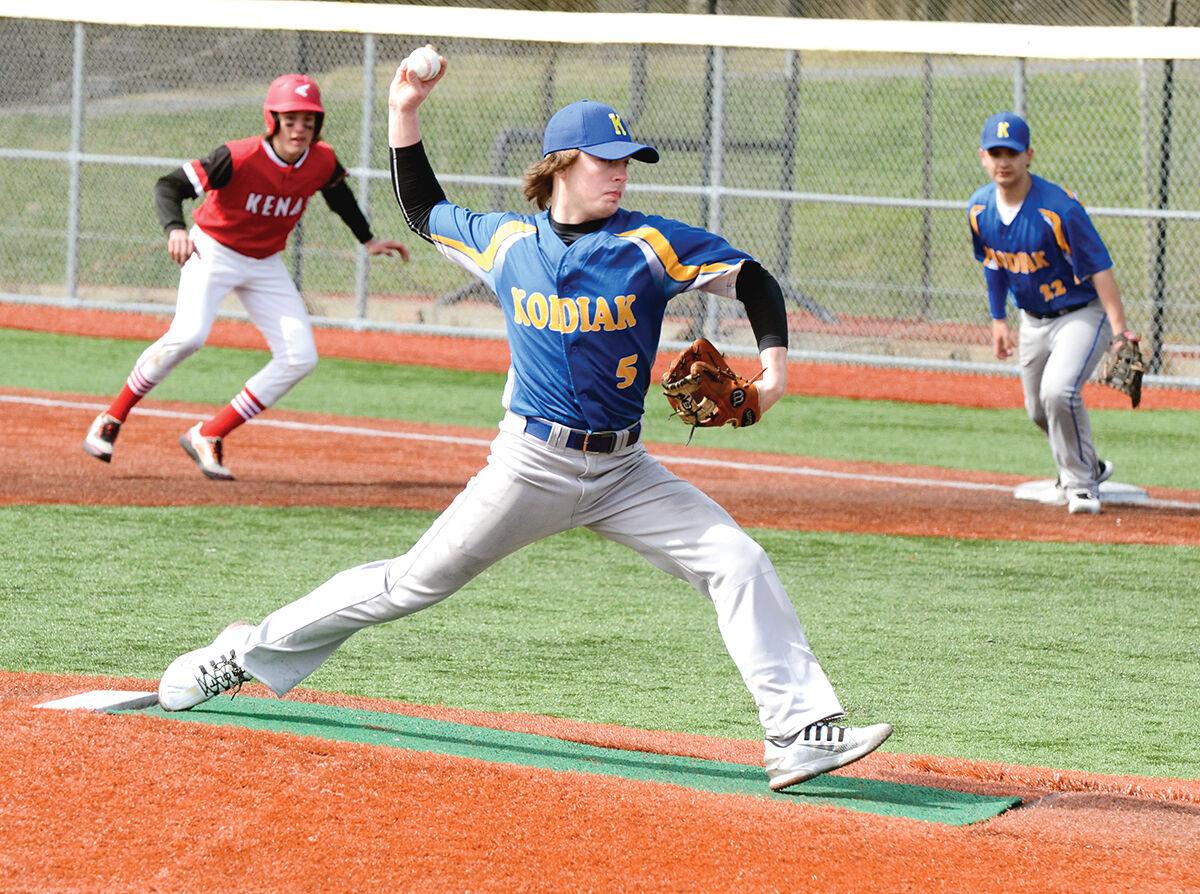 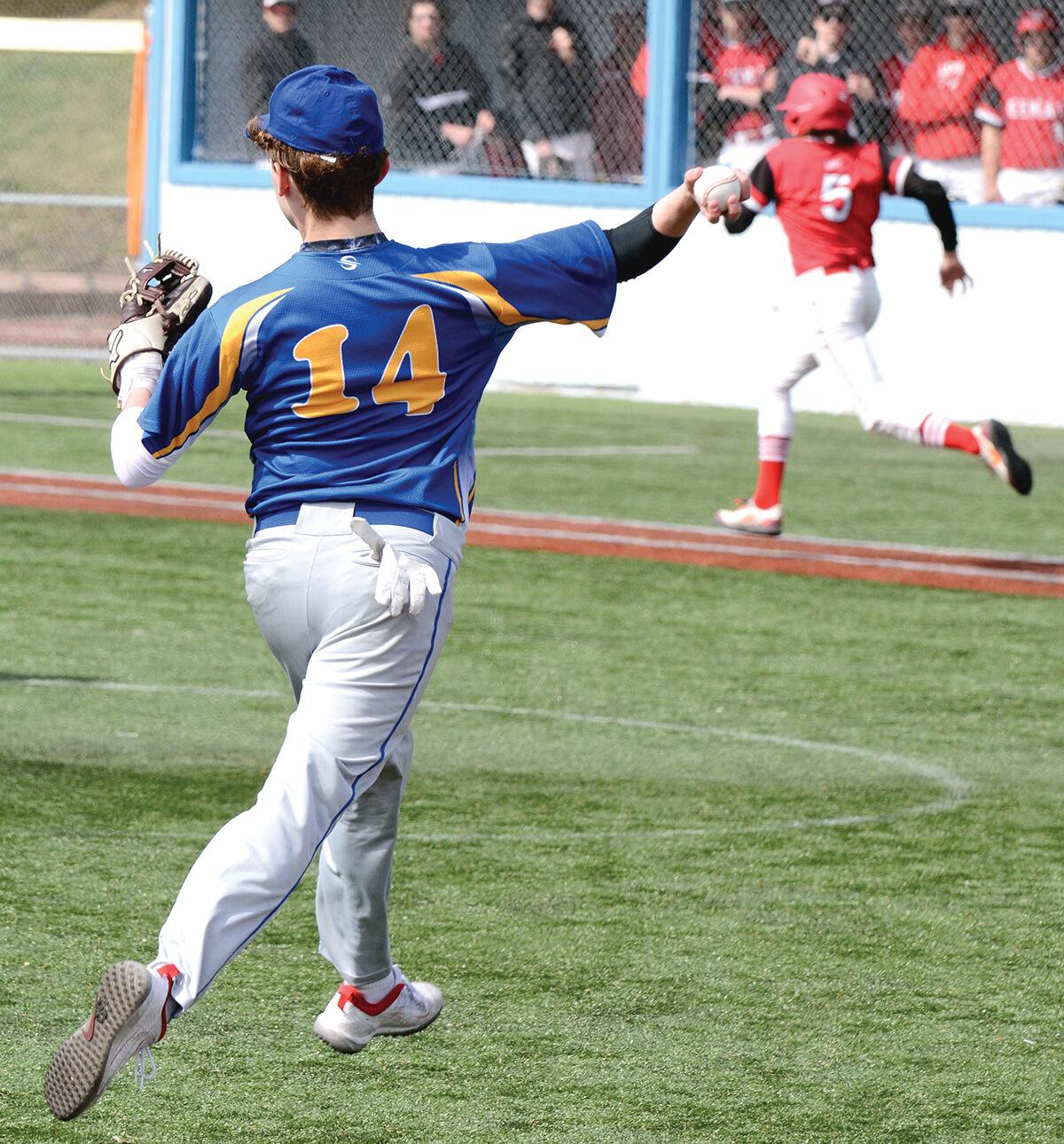 Kodiak coach Jason Fox stands in front of his team’s dugout during a game against Kenai earlier this season at Baranof Field. 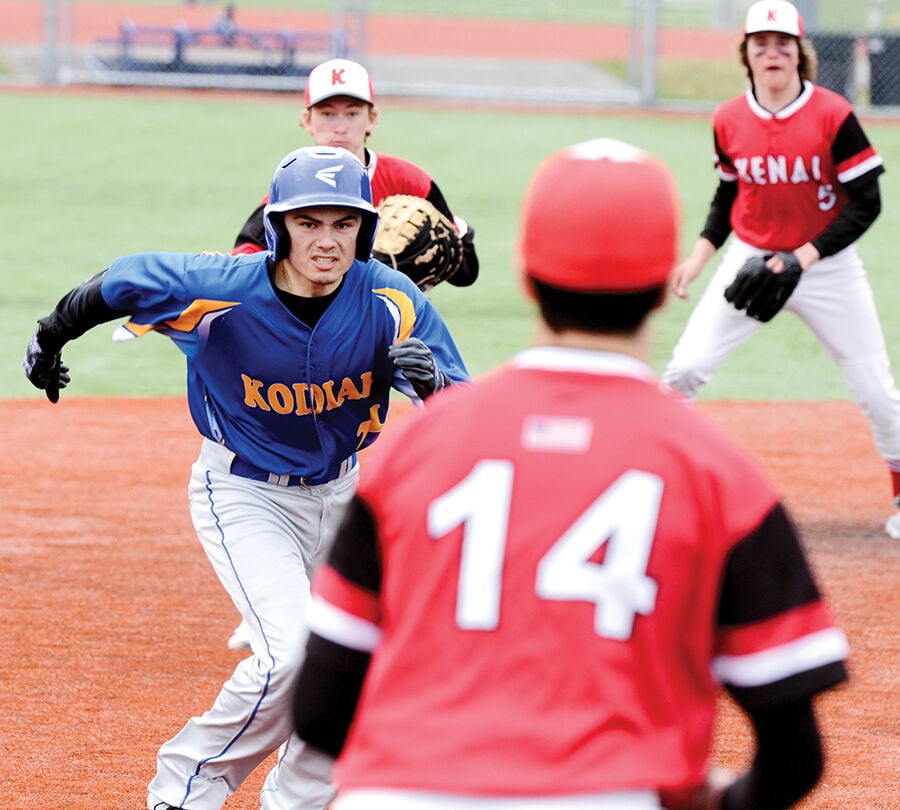 Kodiak's Ryan Stephenson gets caught in a rundown in Saturday's game against Kenai at Baranof Field. 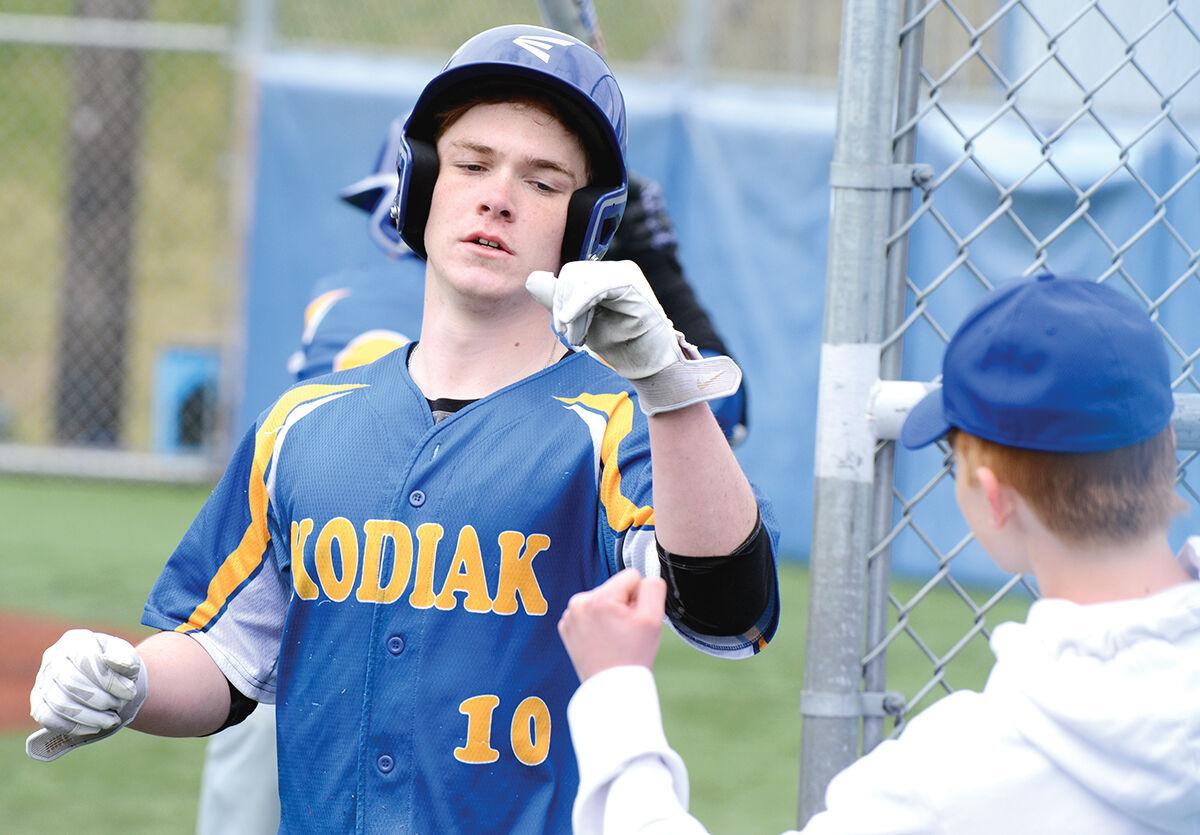 Kodiak's Jack Malloy heads back to the dugout after scoring a run against Kenai in a high school baseball game earlier this season at Baranof Field.

Kodiak coach Jason Fox stands in front of his team’s dugout during a game against Kenai earlier this season at Baranof Field.

Kodiak's Ryan Stephenson gets caught in a rundown in Saturday's game against Kenai at Baranof Field.

Kodiak's Jack Malloy heads back to the dugout after scoring a run against Kenai in a high school baseball game earlier this season at Baranof Field.

Just like that, Kodiak High’s home baseball season is over.

Because of the pandemic, the Bears waited 23 months to play a game at Baranof Field. They made up for a missed season by opening the 2021 campaign with seven straight home games.

Kodiak concluded three weekends of playing on the artificial turf with a two-game Southcentral Conference sweep of Kenai, winning Friday 16-1 and Saturday 16-9.

“Now we get to travel the whole month of May,” Kodiak coach Jason Fox said. “It just is how our schedule is this year. It is kind of frustrating — it would be nice to be here, but we will go play some games elsewhere.”

Kodiak hits the road riding a four-game winning streak that upped the Bears’ record to 4-3 overall, 4-0 in conference.

Although both games against Kenai had winning runs of 16, both games were won in distinctively different ways.

Jake Malloy and Hunter Williams combined for a five-inning, no-hitter in the series opener. Saturday’s game wasn’t as clean, as both squads kept the scoreboard operator busy with 16 of the 25 runs scoring in the final two innings of a three-hour contest.

The late-game scoring frenzy was witnessed by an influx of future prep ballplayers awaiting Kodiak Little League’s opening ceremony that took place after the last out of the high school contest.

Kodiak Little League is busting at the seams with more than 260 players across all divisions. The youth division is where many of the current Kodiak High players learned how to pick up a bat and throw a ball.

“It was nice for these kids to watch the baseball game. There is a bunch of Little League teams this year, so it was pretty cool,” Fox said.

Malloy was brilliant in his four innings pitched. The senior right-hander struck out five and walked one before giving way to Williams, who completed the no-hitter by fanning two in his inning of work.

The game was called in the fifth due to the mercy rule.

After not walking a batter in his previous outing, Malloy issued a free pass to the first hitter he faced. That runner came around to score on a two-out fielding error. After the error, Mally retired 10 straight, which included four consecutive strikeouts from the second and third frames. He used a 74 mile per hour fastball and a mix of off-speed pitches to keep Kenai’s hitters silent.

“We played really good defensively. I got a couple of strikeouts, and we got the bats going,” Malloy said. “We made them make plays, and they couldn’t. It was a good outing for everyone.”

Malloy brought it with the stick, going 2 for 2 with a rare inside-the-park home run at the short Baranof Field.

Leading off the third inning, Malloy smashed a ball to the gap in right-center field. He raced around the bases and slid feet first into home well ahead of the throw. He sat on the turf for a few seconds, gassed from his round-tripper that gave Kodiak an 8-0 lead.

“When I was rounding first, I threw off my elbow guard, then around second I felt really fast and strong. Once I rounded third base, my legs started to give out ... It was a good hit and got the dugout lively,” Malloy said.

Kodiak jumped all over Kenai from the start, scoring five runs in the first inning. The Bears never eased up, putting up 16 runs on 11 hits in four frames. The Kardinals struggled defensively, with six errors and a pitching staff that issued nine walks.

“We definitely want to win our region, and that is a realistic goal,” Malloy said. “After that, we just got to take it one game at a time all the way to state.”

Nursing a 5-4 lead after four innings, Kodiak scored seven runs in the fifth and was close to ending the game via the 10-run mercy rule when the final out of the inning was recorded with runners on second and third.

The game turned wild after that. Kenai punched in five runs without a base hit in the sixth inning.

Williams, who worked out of a bases-loaded jam replacing starter Arndt in the fifth, couldn’t get out of the sixth.

The sophomore walked four and gave up five runs allowing Kenai to close to 12-9. The Bears committed two of their four errors in the sixth.

Kodiak scored four in its half of the sixth, highlighted by Holland’s two-run triple — his second three-bagger of the game.

“We saw a lot of good stuff from everybody. I think we have our starting nine down finally, and we got some good hitters coming in behind them,” Fox said.

Crall was unstoppable at the dish, driving in five runs on three singles in his final three at bats.

“He is swinging the bat great. I was hoping he would get keyed in this weekend before we head into traveling,” Fox said.

Jason Foxworthy had two singles and drove in two, while Williams hit a run-scoring double in the first.

Kenai actually took a 4-3 lead in the fourth before Kodiak regained the lead for good with a Jackson Krug sacrifice fly and a Crall single that scored Foxworthy in the bottom of the fourth.

Kodiak begins a three-game road trip to the Mat-Su Valley on Thursday. The Bears open against North Pole at 6 p.m. and finish with the Patriots Saturday. Friday’s game is against Redington. All games will be played at Redington.