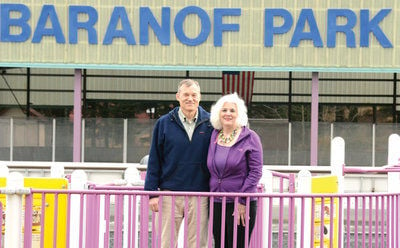 City of Kodiak Parks and Recreation director Ian Fulp, left, and his wife Judy stand outside at Baranof Park Thursday afternoon. Fulp is retiring from the city in September after 39 years of service. (Derek Clarkston photo) 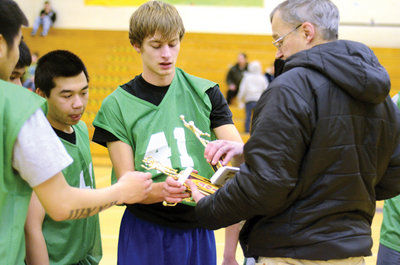 City of Kodiak Parks and Recreation director Ian Fulp, left, and his wife Judy stand outside at Baranof Park Thursday afternoon. Fulp is retiring from the city in September after 39 years of service. (Derek Clarkston photo)

“The few days after I got hired, I was walking around with the contractor and finalizing the project,” Fulp said about Baranof Park.

Fulp, who turns 66 in July, announced his retirement earlier this week. His last day on the job is Sept. 30.

“I’m very proud to be the first Parks and Recreation director and having stayed as long as I have,” Fulp said.

He is the longest-serving employee the city of Kodiak has ever had. From its thousand-dollar start, the department’s budget has risen to

“Certainly the community and myself as the city manager really appreciate all the years of service Ian has put into the job,” city manager Aimée Kniaziowski said.

“He really built the programs and agreements and has a tremendous amount of knowledge and organizational memory that will disappear when he retires. We certainly appreciate his commitment.”

Kniaziowski said it could take up to six months to fill Fulp’s position and she did not know if the new director would be hired before his departure in September.

“I appreciate the fact that he is going to be here a little while as we transition through the park project,” she added. “I am really glad he will be able to be here for that and make that final effort on behalf of the community and the kids that use that facility.”

Fulp admitted Wednesday evening he wasn’t ready to retire, but when his wife Judy asked if he was one night, he said he was just to satisfy her.

As it turns out, he meant it.

The Fulps are planning to relocate to Anchorage to be close to three of their six children. The other three live in California. Luke, their youngest, just accepted a job in the Mat-Su Valley.

“Had Luke not left, (Judy) would have wanted me to keep working,” Ian said.

Judy has been by Ian’s side during his entire tenure with the city.

They both graduated from Kodiak High School and married in 1969.

“You are always on call. I am proud of him for being that dedicated,” Judy said. “You rest up and live for the job. Like he said, it was a great job. He couldn’t have had a better thing for him, because I see him as the athletic director for the whole community.”

Ian started his tenure with the city after a three-year stint as a teacher and coach with the Kodiak Island Borough School District. He left the school district and the island, so Judy could get her degree. When the couple came back to the island, the Parks and Recreation Department was created.

“I saw it as a job that had a lot of potential. I just thought that it could be a real interesting job,” Ian said.

“My original paycheck was $5.78. It really wasn’t enough to make a living on, but I thought this could develop into being a real good job, and it has.”

Ian said his family and helping people kept him motivated for the past 39 years.

Under Ian’s oversight, the recreation department developed numerous parks, playgrounds and ball fields, then organized youth and city league sports to fill them. However, he said his biggest accomplishment was putting together the joint use agreement for activities between the borough, city and school district.

His prize jewel is the city basketball league, which includes more than 300 Kodiak residents during the long winter months.

Joe Floyd, who Ian said was his mentor, started a sports program in Kodiak, but Ian added to it when he took over by creating the Christmas Tournament.

“One thing I’m going to miss is when I walk into the gym, all the young guys recognize me and there is a respect there from those young players that I really enjoy. That I am an important person to them and I really like that,” Ian said.

Ian has seen many players grow up through city league basketball, including Steve Pruitt, who has been a part of city league as a scorekeeper, player and referee since 1973.

“When I entered the league, it was basically for older men. Since that time he has got so many kids involved in this community, and with some that has kept them away from other trouble,” Pruitt said. “His main purpose has been for the kids in this community.”

Fulp is sticking around long enough to watch the construction of an artificial turf field and the resurfacing of the track at Joe Floyd Track and Field — a project that has been in the works since 2004.

“It started with Baranof Park, and now look at all the parks we have now,” Ian said. “And all of those we had to push and work for.”

“This last project is what we are going out on,” Judy said. “It is not like going out on 40 years; we wanted to go out on a big project.”

Ian’s nearly 40 years of service might not have been, if it wasn’t for Judy.

“If she would have said 20 years ago, ‘I want to move,’ we would have moved,” Ian said. “Staying nearly 40 years is because of her. She wanted to stay and has always felt that I was doing something really important.”