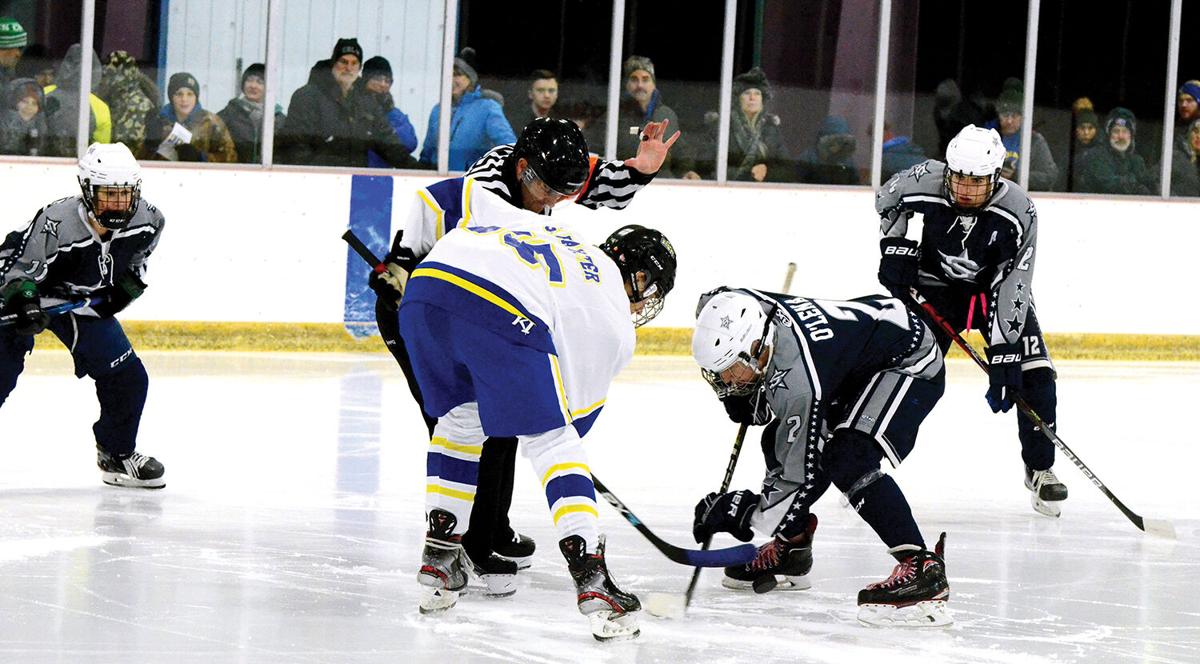 An official drops the puck to begin the first home game for the Kodiak High School hockey program on a chilly Friday evening at the Baranof Park ice rink. 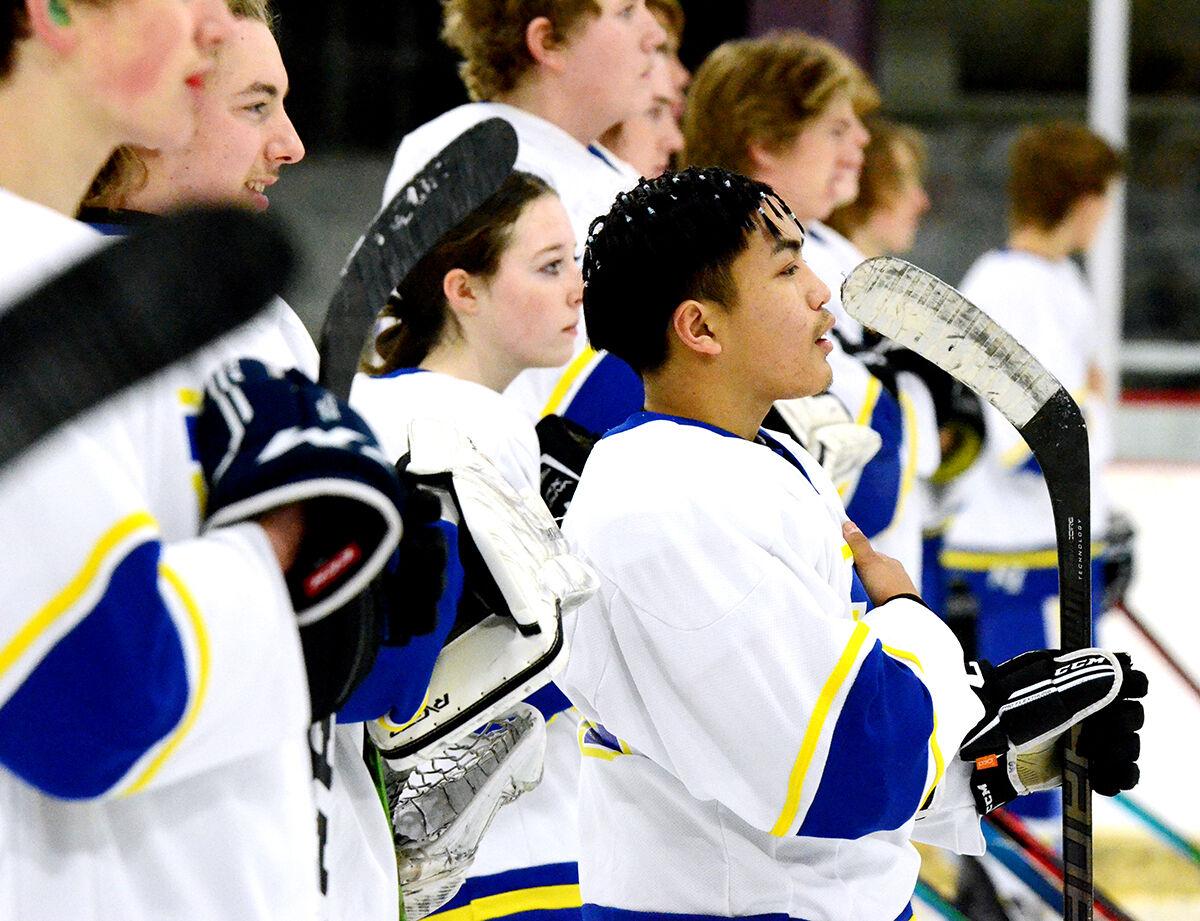 Players from the Kodiak High School hockey team listen to the singing of the national anthem before the start of their game against Soldotna Friday at the Baranof Park ice rink. 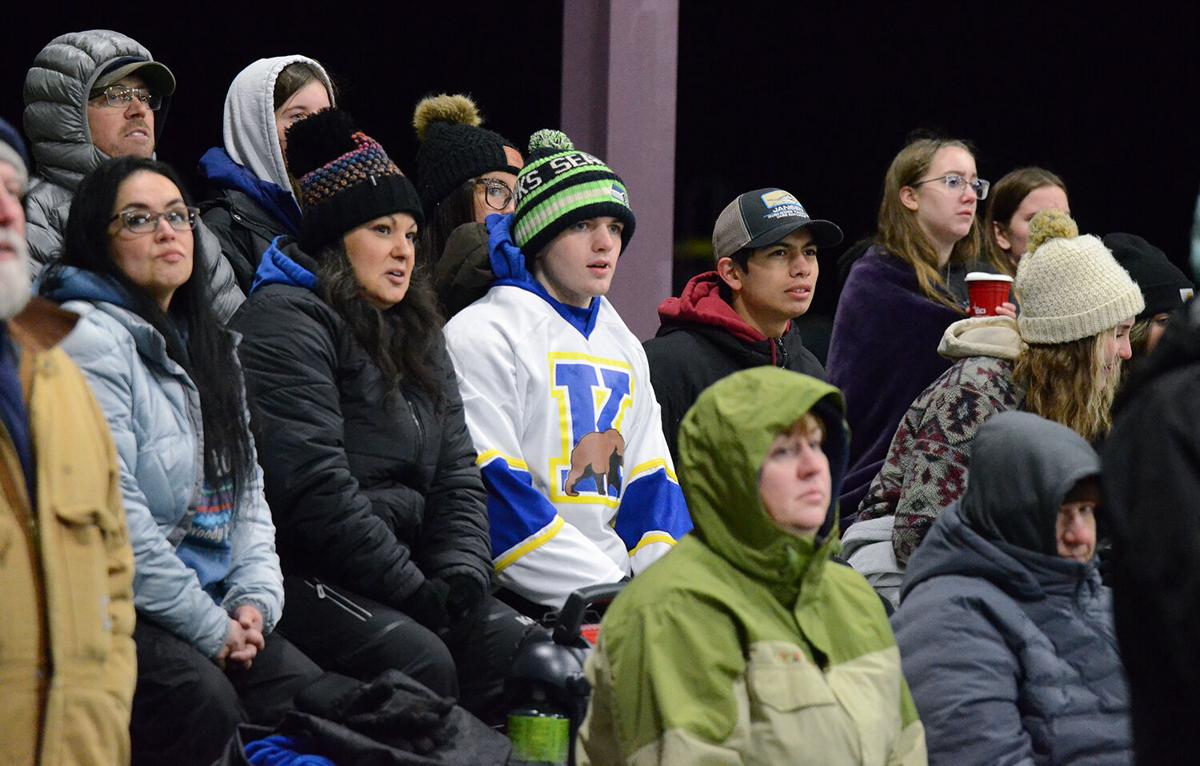 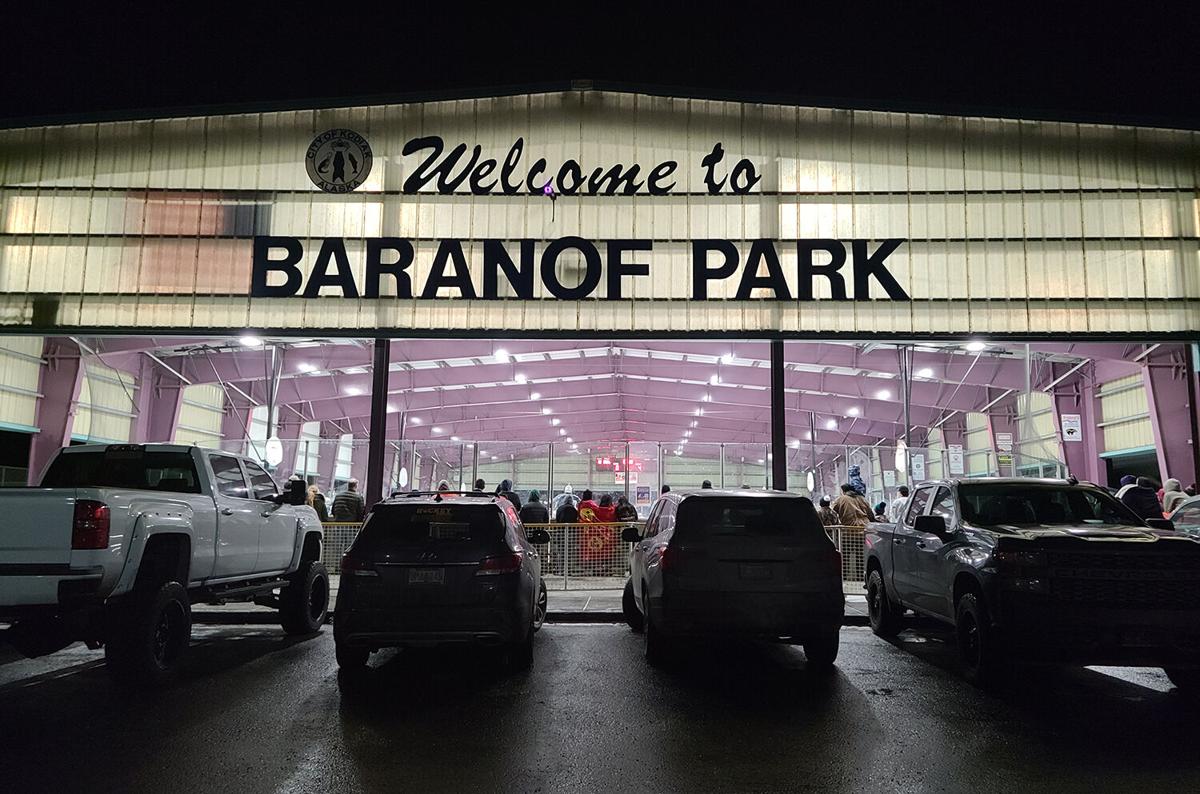 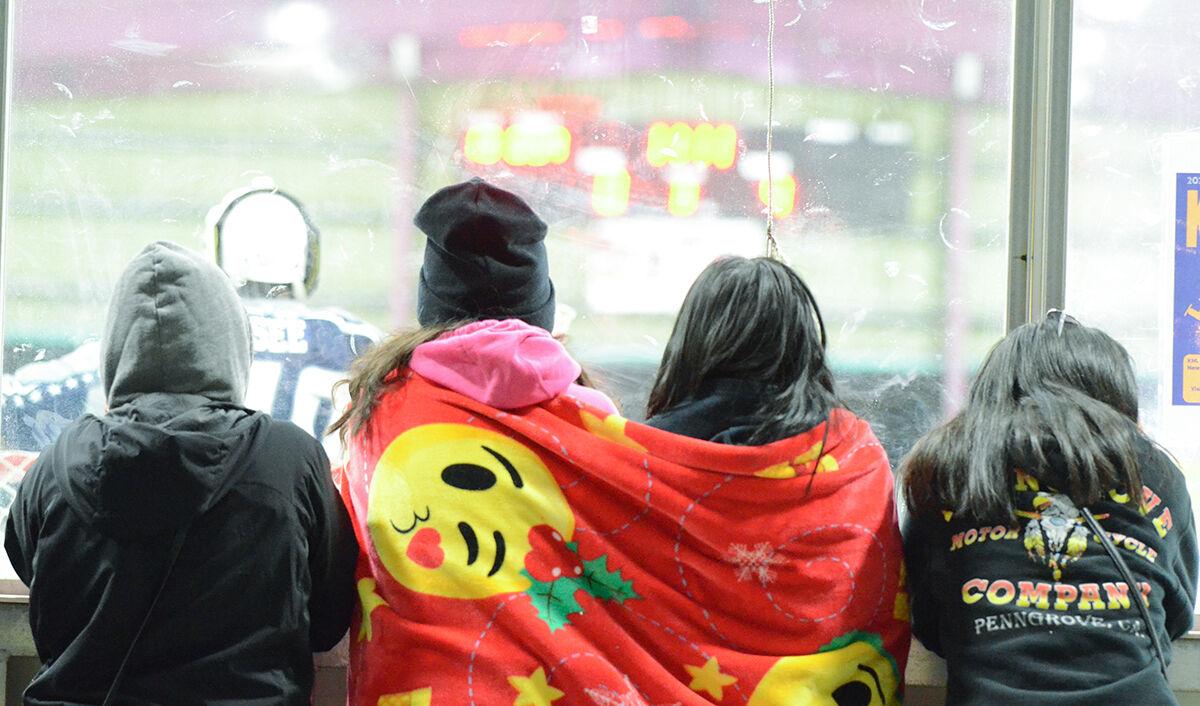 Fans bundled in blankets and sweatshirts to watch Kodiak play Soldotna in the first home hockey game in program history.

An official drops the puck to begin the first home game for the Kodiak High School hockey program on a chilly Friday evening at the Baranof Park ice rink.

Players from the Kodiak High School hockey team listen to the singing of the national anthem before the start of their game against Soldotna Friday at the Baranof Park ice rink.

Fans bundled in blankets and sweatshirts to watch Kodiak play Soldotna in the first home hockey game in program history.

Kodiak entertained Soldotna in the first prep hockey game played on The Rock.

More than 200 fans were on hand. Most lined the plexiglass of the Baranof Park ice rink, while others sat in bleachers next to small heaters.

They all cheered when the puck dropped for the first time and continued making noise throughout the three 15-minute periods.

“It was absolutely awesome,” Kodiak coach John Glover said of the crowd. “I hope that they saw how fast and physical it (the game) is, and they want to come watch more games.”

Soldotna used a pair of short-handed goals to spoil the home debut and take the Railbelt Conference game 4-0.

First-year Soldotna coach Anthony Zurfluh said he felt the energy and excitement at the outside rink. The temperature hovered in the lower 30s, but that didn’t dampen the mood.

“The buzz in the air was here. That is what it is all about,” Zurfluh said. “For Kodiak to come here and cheer on their team — that makes it better for all of us.”

The crowd got louder with every bodycheck into the boards. Kodiak’s George Aquino delivered several pounding blows that sent Soldotna skaters to the ice.

Friday was Aquino’s first game of the season. He missed the opening two-game series in Homer due to a knee injury.

“I was not expecting this at all,” said Aquino on the physicality of the game. “It was a really fast-paced game. I was just happy to be out here. The other team played great.”

A few minutes later, Dawson Lockwood put Solodotna up 2-0 on a short-handed goal. Boone Theiler assisted on both goals.

Theiler made it 3-0 when he punched in another short-handed goal with 3:33 left in the second period.

Kyler Howell closed the scoring 30 seconds before the second intermission.

“When we played with confidence, we did well in their zone. When we got back on our heals, they took advantage of it,” Glover said.

“We can hang with those teams. It is just feeling that speed, that physicality being confident and being a team.”

“I can see how everyone plays and how everyone tries,” he said. “I can tell we were all playing out of our minds. It was easily our best game.”

“Here in four or five years, once these kids start getting the buzz and gaining, we expect them to be big contenders,” Zurfluh said. “Today was no easy task for us. We had to work for it. Props for Kodiak for putting a product on the ice that makes it fun for everybody.”

Theller’s goal with 1:01 left in regulation pushed Soldotna to a 4-3 victory and denied Kodiak a shot at its first victory.

Soldotna improved to 2-0 in the Railbelt Conference, 5-3 overall, while Kodiak dropped to 0-4 in conference, 0-4 overall.

In the first period, Kodiak’s Colin McCarthy scored the first home goal in program history at the 7:41 mark.

Blake Terry, who sang the national anthem before Friday’s game, tied the game at 2 with a buzzer-beating strike to end the first period.

Daniel Heath put Soldotna up 3-2 with 9:26 left in the second period. Kodiak’s Max Cook tied it at 3 on a double-penalty goal seconds into the third period.

Kodiak is idle until Dec. 9, when it travels to Juneau for a two-game series.