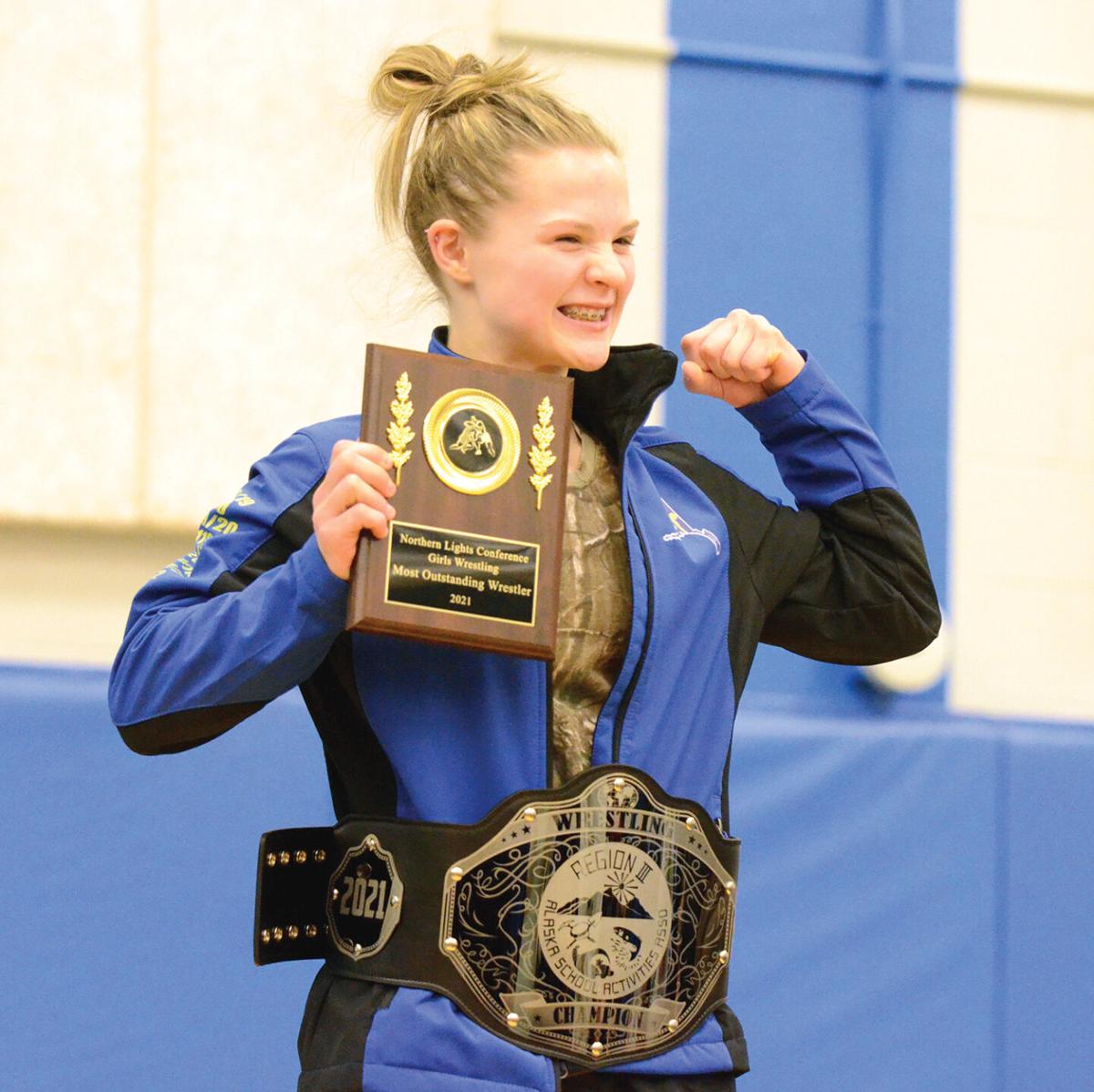 Kodiak's Olivia Troxell flexes after being named the Northern Lights Conference girl wrestler of the year in December 2021 at Kodiak High School. 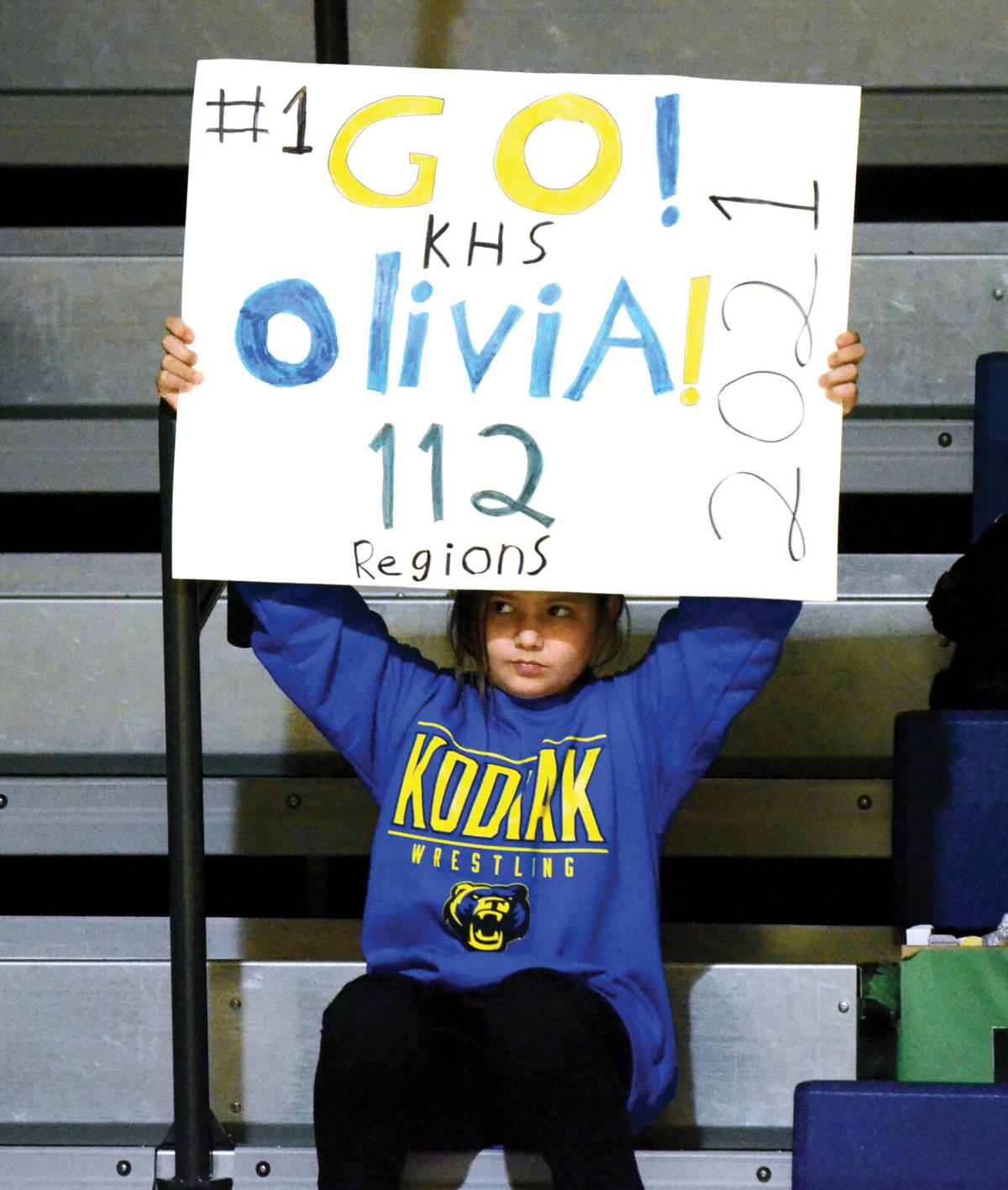 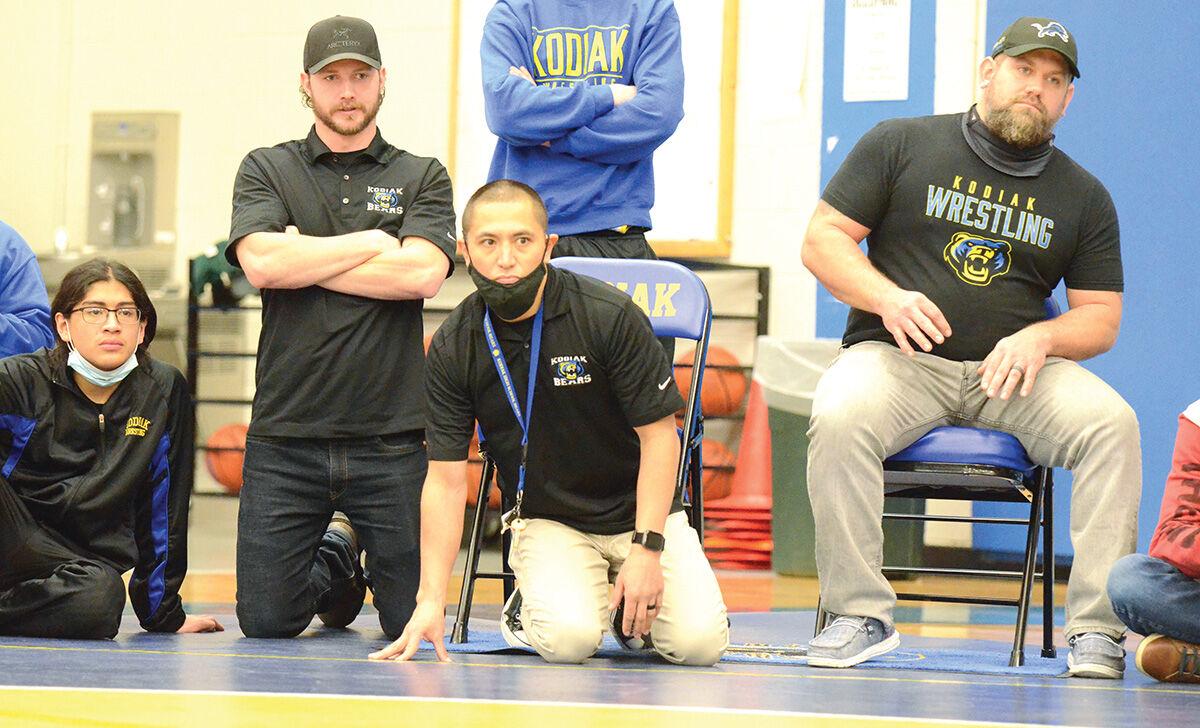 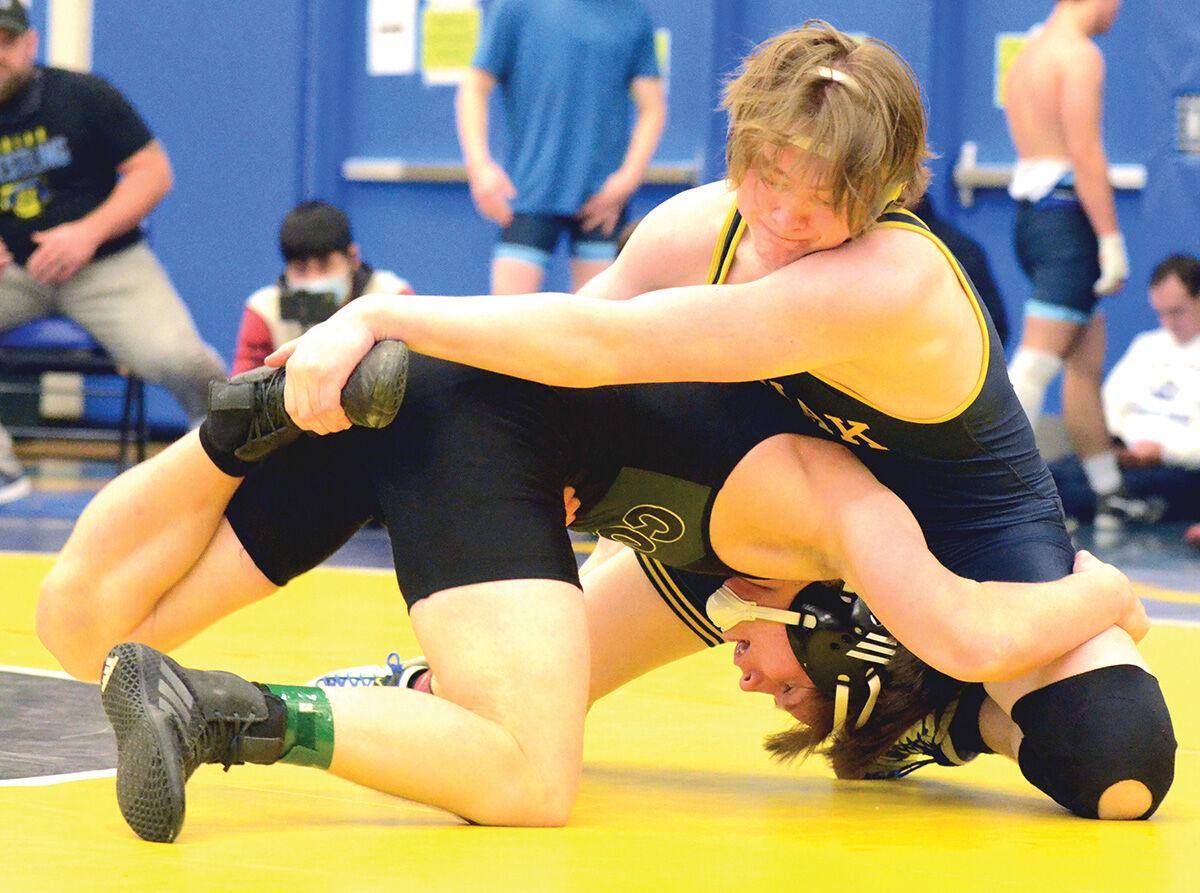 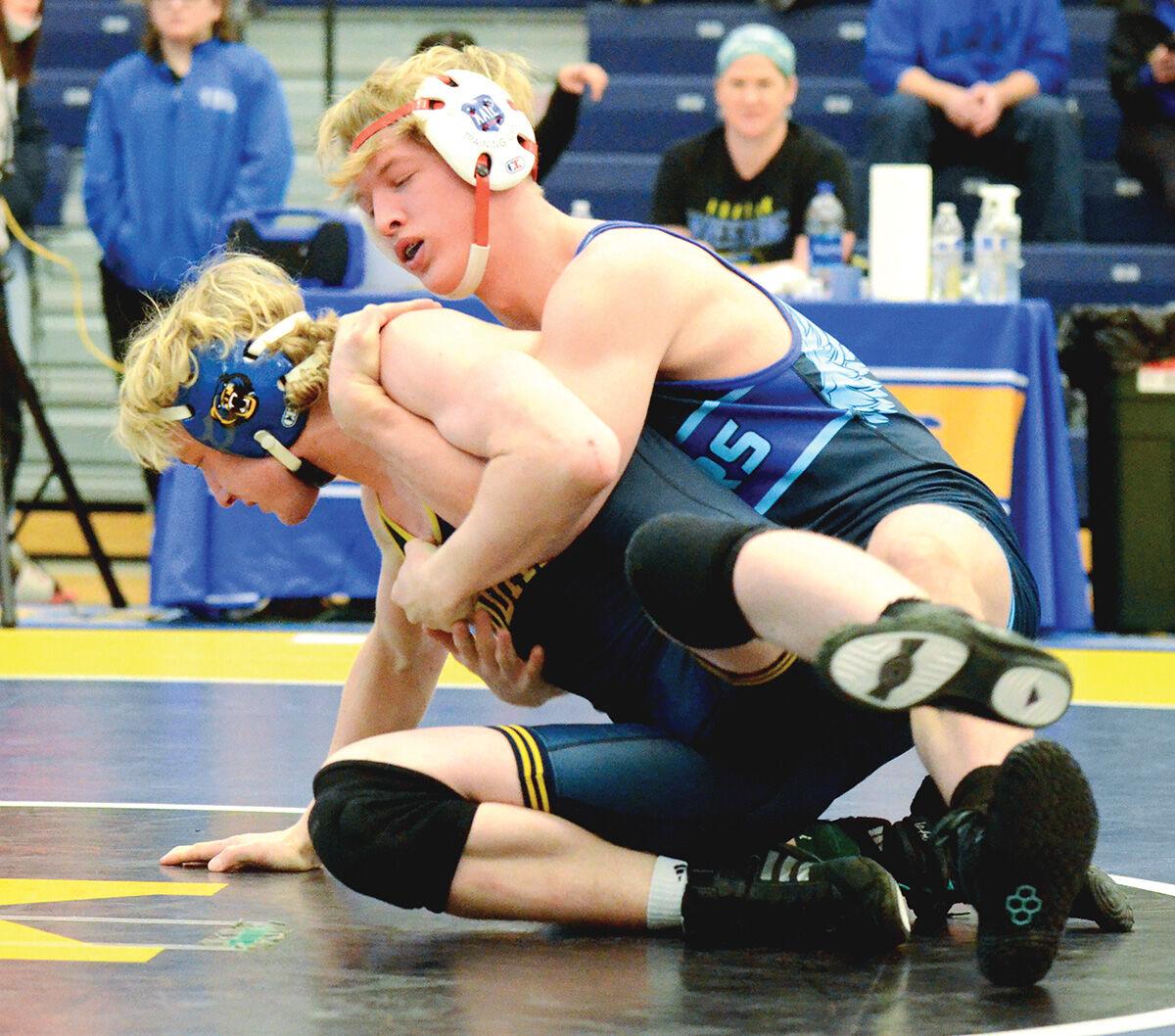 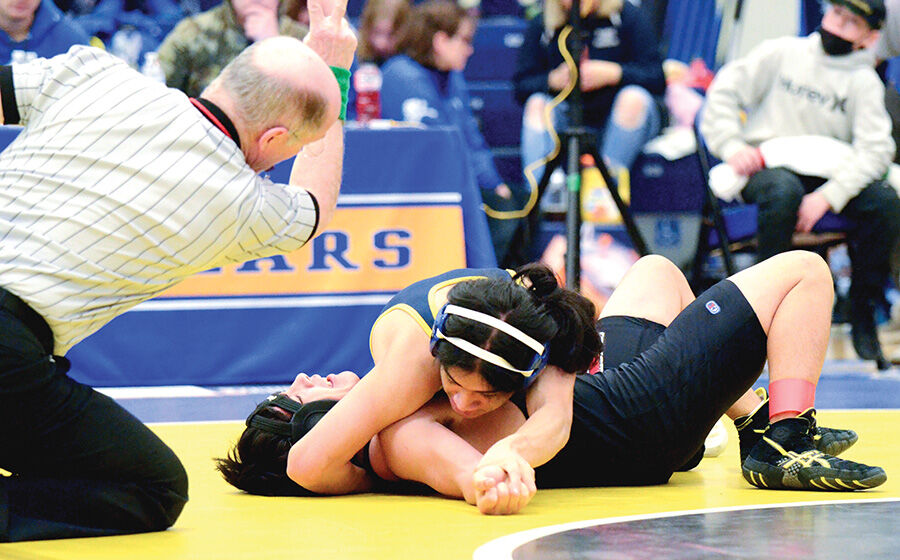 Kodiak's Olivia Troxell flexes after being named the Northern Lights Conference girl wrestler of the year in December 2021 at Kodiak High School.

Olivia Troxell spent 3 minutes, 9 seconds on the mat. It was the best 189 seconds of her life.

In her first home meet since 2019, Kodiak High’s powerhouse wrestler embraced the moment.

Her smile said it all — the senior was ecstatic to be back at home.

In dominating fashion, Troxell won her third regional title with a second-round pin of Colony’s Thresa Savo in the 112-pound girls’ championship match of the Northern Lights Conference Championships Saturday at Kodiak High.

Hours after sending the home crowd into a frenzy, she was voted by coaches as the conference’s female wrestler of the year — the second time she has earned that honor in her glorious career.

“It was really awesome to wrestle in front of my family,” Troxell said.

Part of Troxell’s family — seated in the front row — were her grandparents. They flew to The Rock from Seattle to watch their grandchild wrestle in person for the first time.

If they blinked, they missed her impressive performance.

After pinning Wasilla’s Olivia Probasco 25 seconds into Friday’s semifinal match, Troxell jumped to her feet and displayed a rare smile.

“I don’t like to come off the mat smiling like that because I don’t want to make the person feel bad — I know how it feels to lose,” Troxell said. “I like to be humble, but there were just so many people cheering I just couldn’t help but smile.”

This was Kodiak’s first home meet since 2019 and only Troxell’s third time wrestling at home during her prep career.

“It’s hard not to smile when you finally get an opportunity to show all your hard work,” Kodiak coach Junior Valladolid said. “I was smiling for her.”

Troxell — Kodiak’s only champion — was tested a bit more in the championship match.

She nursed a 4-1 lead before pinning Savo — a two-time state champion — 44 seconds into the second round.

Nine of her 16 victories this season have been decided by first-round pins.

“I usually get really nervous when I don’t pin somebody in the first round,” Troxell said. “I handled it pretty well and took care of it.”

Valladolid admitted he felt uneasy when the match rolled into the second period.

“It’s funny when you get a little nervous when she doesn’t pin somebody,” he said. “It’s uncommon for her not to pin somebody or have somebody in trouble in the first period.

“Savo is no joke. She is a two-time state champ for a reason.”

Troxell heads to state with a 16-0 record and searching for her first state title. She was third as a sophomore and junior, and fifth as a freshman.

“We just got to treat it like every other match. I don’t want her to get caught up that this is the state championship.”

Troxell will be joined by teammates Samuel Lopez and Jonah Stewart at the state meet that begins Friday at the Alaska Airlines Center in Anchorage.

Lopez placed fourth at 130 pounds, while Stewart was fifth at 152 pounds.

Winless to state qualifier. That is the story of Samuel Lopez.

After not posting a win in his first two seasons, the junior Lopez is headed to state with eight wins. A tremendous turnaround for a kid who didn’t start wrestling until he entered high school.

“After I won my first match, I realized I have potential and that I could really work what I do in the mat room in a real match,” Lopez said.

He punched his ticket to state with a pin over Wasilla’s Shawn Ray in the second round of a 130-pound consolation semifinal. It was just a week ago that Ray pinned Lopez. He avenged the loss when it mattered the most.

“I was stoked. I was very excited,” Lopez said. “It just felt really good to be on the team.”

Lopez lost his bid for third place when Colony’s Ethan Osborn pinned him in the first round.

“He has been consistently in the room, and it has shown this year,” Valladolid said.

Stewart won a pair of elimination matches — the last against Incognito — to propel him to a fifth-place finish.

“He is not afraid to try things and is very coachable — like a video game. You san command right ankle and his hand goes to the right ankle,” Valladolid said.

Stewart sealed his trip to state when Wasilla’s Deshawn Campbell was disqualified before the start of the fifth/sixth-place match.

Junior Ethan Benton fell in his bid to extend his season, dropping a winner-to-state match, 14-3, to Colony’s Keith Connaker.

Valladolid said the match was closer than the score indicated.

“I really wanted that one for him. He is a good kid and works hard,” Valladolid said. “He put his head down and just goes to work. Doesn’t complain and never looks tired.”

REST OF THE TEAM

“If we still had the sportsmanship award, there is no denying that group of kids deserves it,” Valladolid said. “If you didn’t watch the match and just watched them shake hands afterward, you wouldn’t know if they won or lost.”

Colony edged Soldotna by half a point to win the boys’ title with 351.5 points.

The Knights secured the victory when Robert Yundt avoided getting pinned or tech falled in the 215-pound championship match. The Stars would have won had Liam Babitt scored a pin instead of a 15-5 decision.

The Knights also grabbed the girls’ title with 95 points — 12 more than runner-up Palmer.