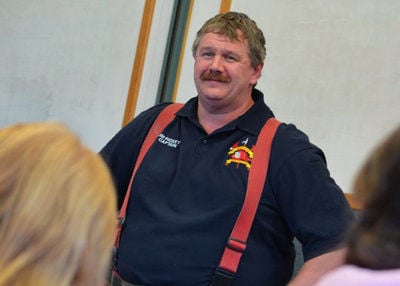 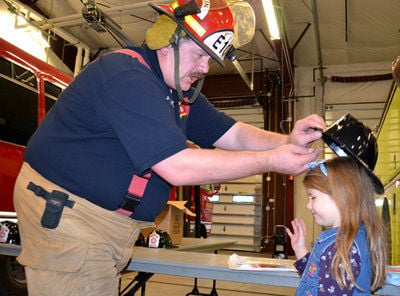 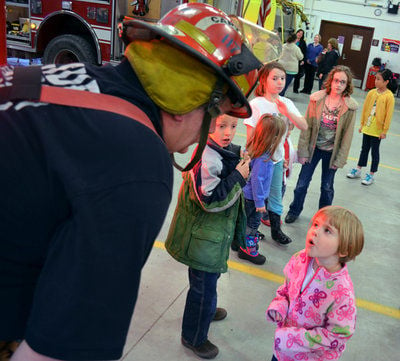 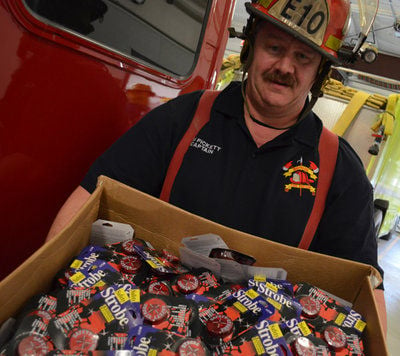 2011 Alaska Firefighter of the Year Jim Pickett of Bayside Fire Department holds up a box Wednesday, Oct. 12, 2011, containing his next project — safety lights he intends to distribute to Kodiak scholchildren. (James Brooks photo)

2011 Alaska Firefighter of the Year Jim Pickett of Bayside Fire Department holds up a box Wednesday, Oct. 12, 2011, containing his next project — safety lights he intends to distribute to Kodiak scholchildren. (James Brooks photo)

KODIAK — For about half a month, fireman Jim Pickett may have been at the center of the best-kept secret in Alaska.

On Sept. 24 at the 2011 Alaska Fire Conference in Fairbanks, Pickett was named Alaska Firefighter of the Year, the state’s highest honor. But Pickett wasn’t at the conference, so state fire marshal David Tyler and Bayside fire chief Bob Himes swore attendees to secrecy — all 300 of them.

“It was a shock to me,” Pickett said Wednesday, recalling the moment last week when Tyler handed him the award at a Kodiak Island Borough Assembly meeting.

Pickett’s official citation recognizes him for running Bayside’s smoke alarm installation program, which put more than 900 units in homes across Kodiak. But his efforts go beyond that, Himes said.

“When there’s a project, he’s the first to volunteer,” the chief said. “He’s one of our EMS first responders … he’s what we call a line officer.”

It’s for all of those reasons that Pickett became Kodiak Island’s first firefighter of the year.

“We’re not necessarily looking for the ones who are doing the real dramatic, high-risk rescues,” Tyler said. “We’re looking for people doing the day-to-day promoting of their profession. There’s a lot of people who come in and go into work every day, but there’s always a few who go above and beyond.”

Pickett was raised in Yakima, Wash., and came to Kodiak when he was 19 years old, he said. His first job was at Afognak Island, working in a logging operation. He moved on to construction and started firefighting 24 years ago as a volunteer with the Kodiak city fire department. Ten years ago, he joined the Bayside fire department as a volunteer.

He took the community outreach job early in his time at Bayside, but admitted he was a little leery.

Today, he is happily employed at Providence Kodiak Island Medical Center and spends much of his spare time volunteering with Bayside and elsewhere on the island. He is married, with two grown children — one of whom lives in Kodiak — and one grandchild.

He said he couldn’t have done the smoke alarm project for which he was honored without the help of his wife. “(She) was behind me 100 percent,” he said.

That program started late last year and continued until the smoke detectors ran out, but Pickett said if people still need help, he’ll do his best to provide it.

“If somebody calls and says they need a detector, I will find one,” he said.

While being named firefighter of the year is nice, Pickett said, it doesn’t mean it’s time to stop working. Next week, he starts his newest project — distributing safety lights to schoolchildren. Hundreds of lights have been provided by Sutliff’s True Value Hardware, and the fire station purchased hundreds more.

“I’m going to try to get that kicked off next Monday,” Pickett said. “It’s just so black in the morning.”

Further down the road is an even bigger step for Pickett. Bayside chief Bob Himes has quietly announced plans to retire in three years or so, and Pickett appears to be one of the top contenders to replace him.

While the state firefighter of the year is an obvious choice, Pickett said there’s still a ways to go before he takes that step.

“We’ll see what happens,” he said. “Three years is a long time away.”

State fire marshal David Tyler said the panel that selects firefighter of the year picks from about a dozen candidates each year.

The five-person selection panel includes one person from Tyler’s office, the winner of last year’s award, and three other firefighting award winners.

The firefighter of the year award has been given out annually since before Tyler took office about 20 years ago, and Pickett will help select next year’s winner.

Other firefighting award winners this year were Anchorage’s Alex Boyd, named fire instructor of the year, and Traci Davis of the South Tongass Volunteer Fire Department, who was named fire and safety educator of the year.