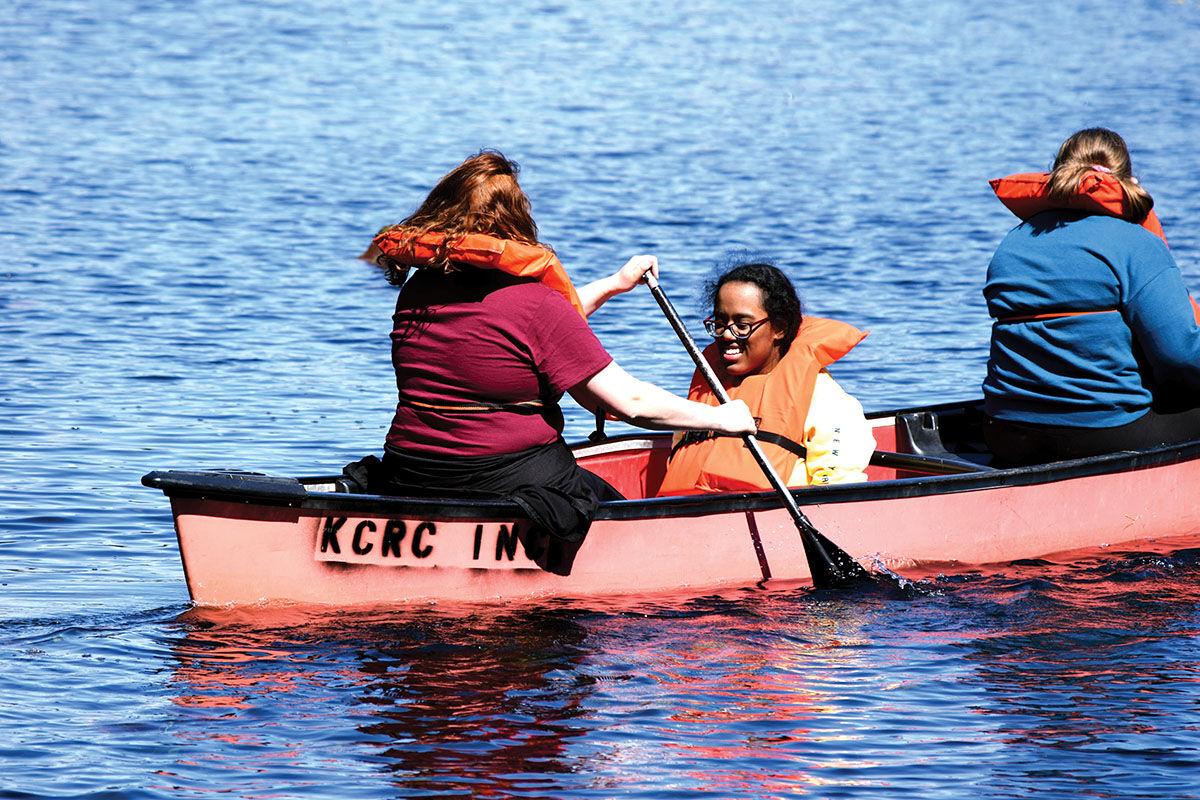 Special Friends Youth Group members and volunteers enjoy a canoeing activity off the coast of Woody Island in May. 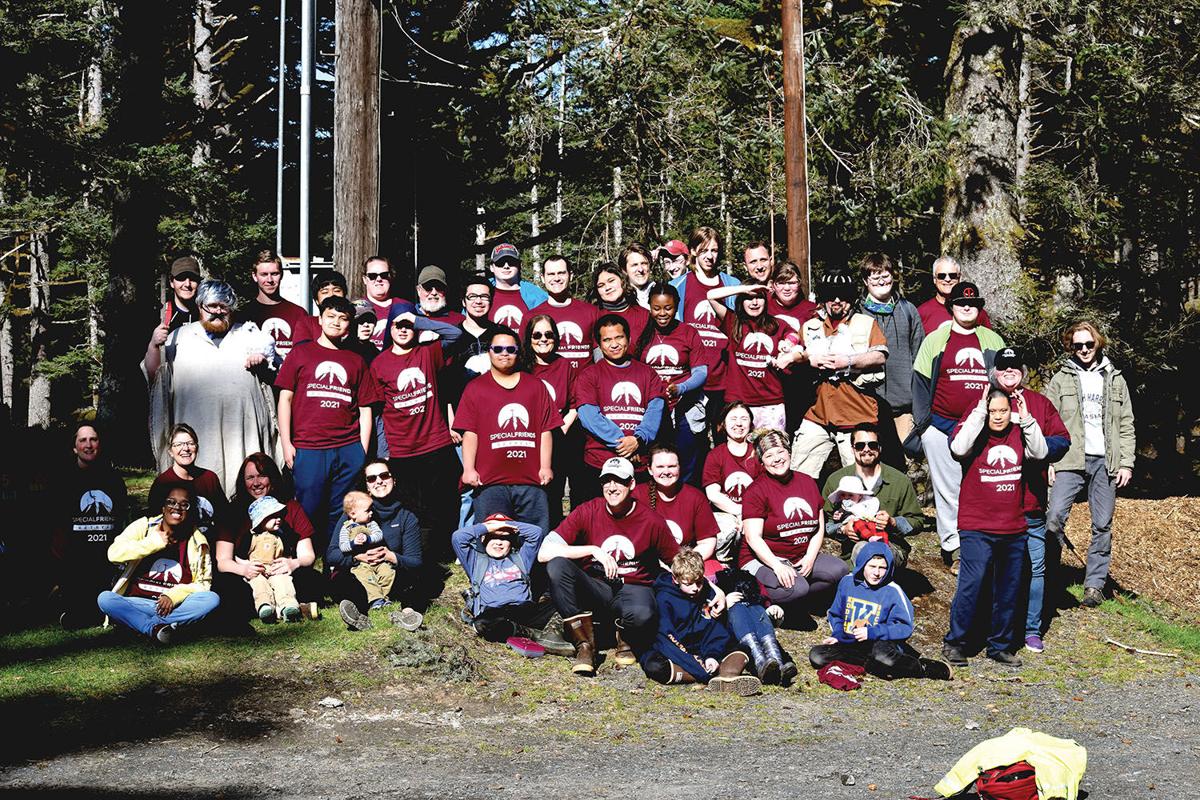 Andy Conway and the Special Friends Youth Group pose for a group photo in May following its trip to Woody Island.

Special Friends Youth Group members and volunteers enjoy a canoeing activity off the coast of Woody Island in May.

Andy Conway and the Special Friends Youth Group pose for a group photo in May following its trip to Woody Island.

Three years ago Andy Conway saw the need to create a dedicated space for developmentally disabled youth within the Kodiak church community. A substitute teacher at the time, he was covering a life skills class on a long-term basis.

“We ended up creating a program called Special Friends [at Berean Baptist Church], which was just a way to reach youth with special needs and come together, hang out and teach Bible stories at their level,” Conway said.

The program grew into the Special Friends Ministry, which serves youth between the ages of 12 and 23. It has become a staple for 30-some youth, according to Conway, and also has led to the launch of Special Friends Breakfast Club.

“It’s meant to create a community for adults with developmental disabilities,” Conway said. “After I finished working with the high school, I went to work for HOPE Community Services and got to know the adults and their caregivers. I realized they needed something.”

The new program was inspired in part by how the COVID pandemic leads to feelings of isolation.

“One thing COVID taught us is the need everyone has for community,” he said. “We are not meant to be by ourselves. No one should have to go through that.”

He said he had endured that himself while sick and as a close contact several times. Isolation, Conway said, did not sit well.

“For a lot of people with disabilities — even before the pandemic — they didn’t have a lot of things to do or be a part of in the community,” Conway said.

The Breakfast Club meets once a week — on Sundays — at the Harborside Fly By on Mill Bay Road. At the moment the group is small, but Conway hopes to build it up and connect it with other organizations in the community. He is taking it slow for now because of the surge in COVID cases.

“Right now, we’re just building relationships with each other. But eventually we’ll do what we do with the youth group — go bowling, take them ice skating and have birthday parties,” Conway said. “Once we build that relationship foundation, we’ll start moving toward community based activities.”

His hope is to build relationships with other groups in the community, such as Kodiak Special Olympics, and “create some inter-program connections.”

The youth program, which has been going for three years, meets every Tuesday from 6:30 p.m. to 8 p.m. at the Berean Baptist Church gym.

“We play a lot of games and just give them a chance to hang out, then we do a Bible lesson,” Conway said. One of the volunteers is a special education teacher with the school district.

“They talk about their day, about what they got from their lesson or what they are looking forward to in the week,” Conway said.

Conway said he hopes to be able to build a program for elementary age children called Special Buddies.

“We’d start off slow and offer respite care for parents,” Conway said. “One of the things I’ve heard when sitting down with parents and asking what they need is that sometimes they just need a break. What we’re hoping is just to create a parents night out, where we watch the kids and have them play games while the parents have time for themselves.”

Conway said Special Friends has grown since it started in 2018.

“When I first started I had only three students, and I realized we needed to do something,” he said. At first he tried to bring them alongside another youth group, but found it difficult.

He said the Special Friends Youth Group works with people who have a wide range of special needs, including Down syndrome, autism or behavioral disorders.

“What we realized is that we needed to transition to a reverse inclusive model, where you create a program specifically for kids with special needs and bring in other kids to train as buddies,” Conway said. “This way, kids with special needs aren’t isolated from other people and interact with other people. We don’t want them isolated, but we create a program specifically designed for them.”

In the years since, he said his ministry has taken youth to Camp Woody each May to give them the experience that children enjoy during Camp Woody’s summer program.

“We try to create the summer camp experience but cram it all into one day in a way that is designed for them,” Conway said. “We go canoeing, teach Bible stories and go hiking.”

The program is staffed with volunteers from different churches in the community, whom Conway said have experience either teaching in Kodiak schools or as special needs school aides.

Another goal is to make churches more inclusive for people with disabilities.

“I’m working right now to raise funds to build a handicap accessible bathroom at our church,” Conway said. Eventually he would like to build toward working with local theater arts companies to possibly hold viewings for children and youth with special needs to watch and enjoy.

During the pandemic, the group attempted to meet virtually using a BlueJeans account, but started meeting again in person quickly after that.

“We realized that these kids do not thrive being isolated and need to be with other people,” he said. “We took all the necessary precautions we needed to meet during COVID and it was really cool. No one got sick and we were really blessed with how it worked out.”

He said sensory input is essential and the pandemic hampered that.

“Their social skills seemed to have started to diminish and just being stuck in their homes was not a good thing for them, especially if a home was already a tense situation,” Conway said.

“Our normal theater productions would be really hard for some people with special needs to just sit through without making noises or needing to get up and walk around,” Conway said.

Another goal, he said, is to create a model and help train other churches to create similar church-based programs in other communities. Conway said a church in Nevada was looking to establish a similar program but found a lack of resources, and reached out after hearing about the Kodiak program.

“It’s part of what we want to do in the future — help train other churches to create what is called an ‘inclusive church,’” he said. “We now have students from our Tuesday night program come to church service on Sunday mornings. I had bought some trays that slide up from underneath the seats so they can color, sit through the service and feel like they are part of the community.”

Some, he said, are serving in church functions, with the goal of finding a role suited to their skill sets or talents.

“We have some of our girls that help lead groups from one activity to another,” he said. “They love being part of something and contributing. They’re just amazing.”

For more information on Special Friends Ministry, contact Andy Conway at andybconway@gmail.com or 251-406-1850.