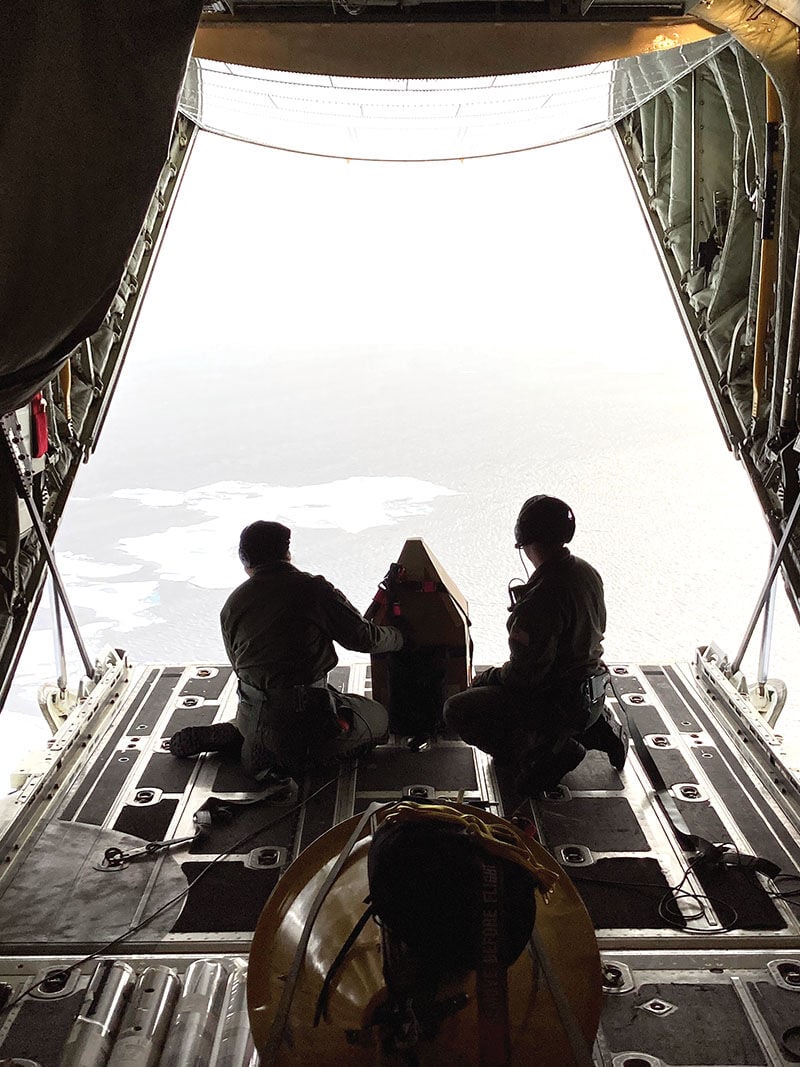 Members from Coast Guard Base Kodiak deploy University of Washington data buoys from the back of a C-130. 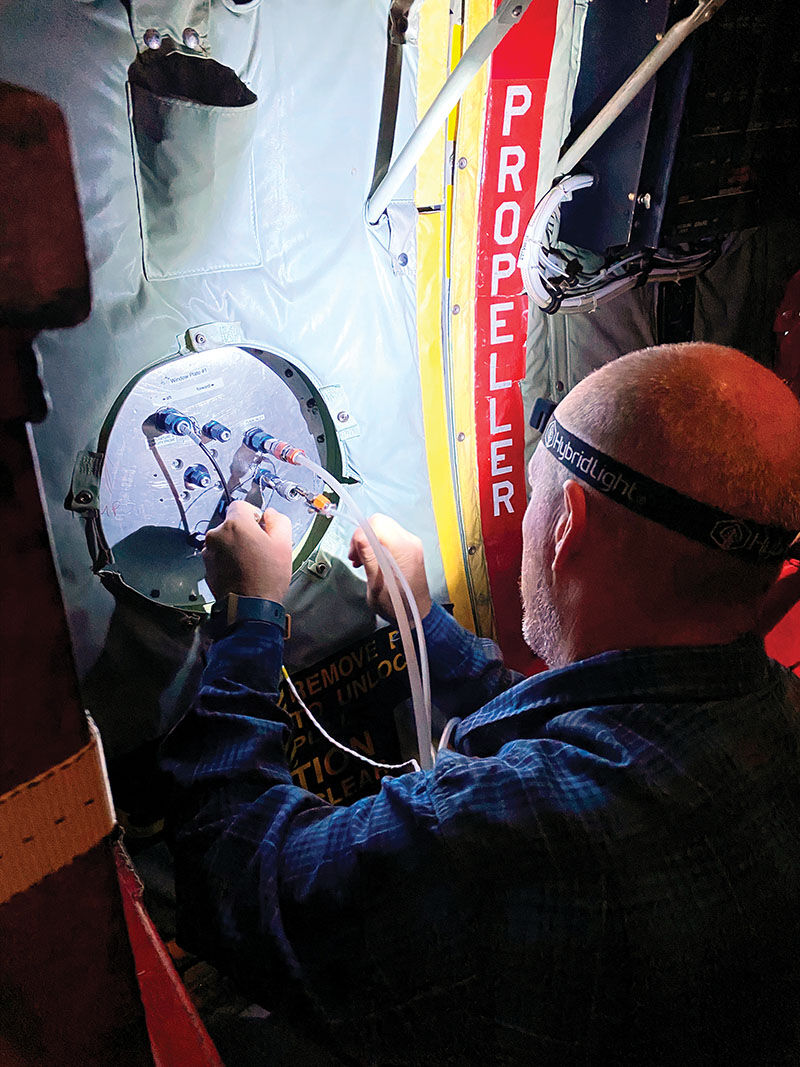 An NOAA air sampling technician attaches hoses to a door plate on the C-130 for sampling during flight. 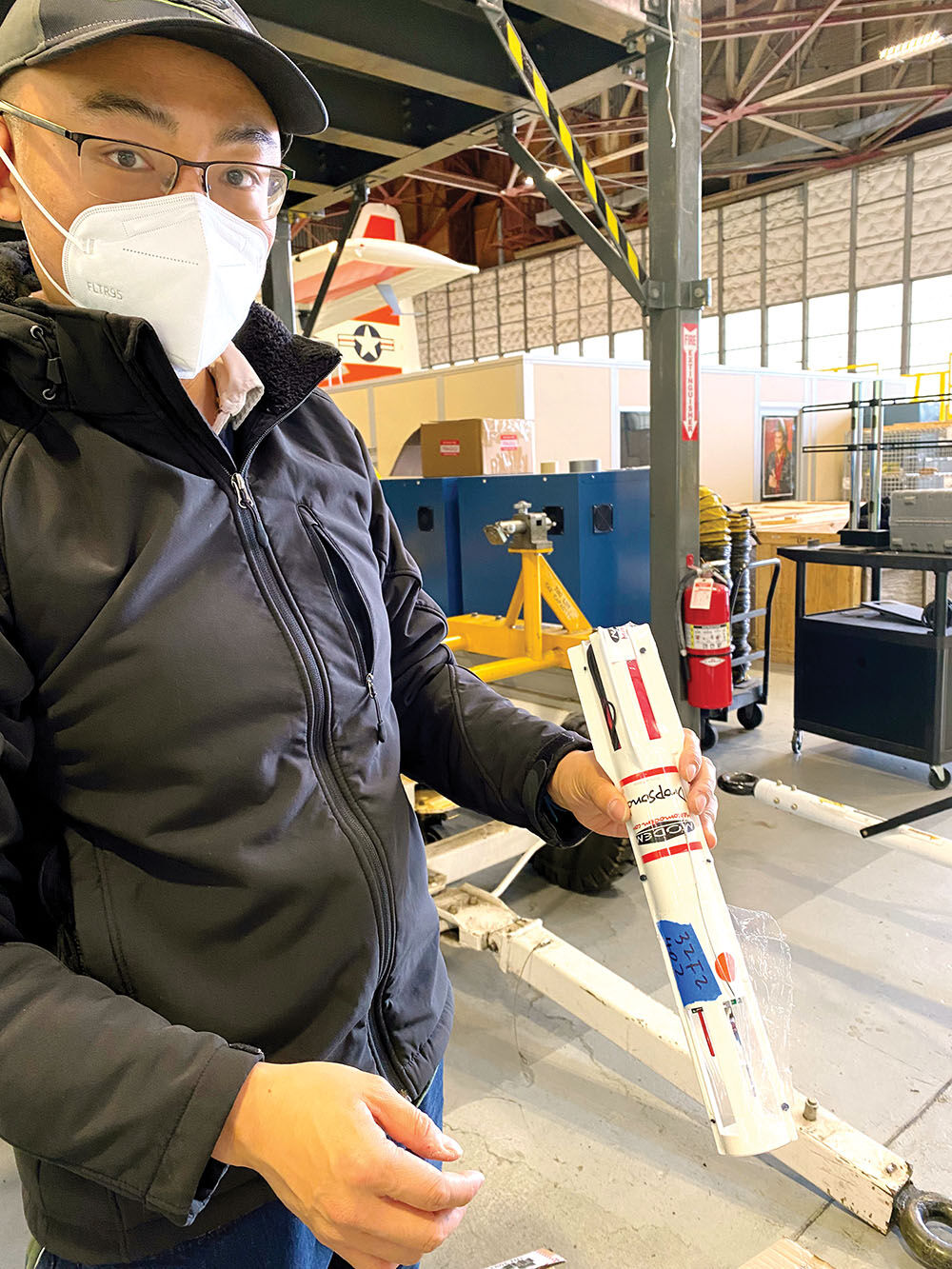 A University of Washington researcher shows a smaller data collection buoy that will parachute out of a C-130.

Members from Coast Guard Base Kodiak deploy University of Washington data buoys from the back of a C-130.

An NOAA air sampling technician attaches hoses to a door plate on the C-130 for sampling during flight.

A University of Washington researcher shows a smaller data collection buoy that will parachute out of a C-130.

Coast Guard Air Station Kodiak frequently earns recognition for rescuing the sick, hurt or lost. A lesser-known task for pilots and crew of the C-130 Hercules fleet is participation in what are known as Seasonal Ice Zone Reconnaissance Surveys.

These flights began in 2009 when the Coast Guard was invited to partner with the University of Washington’s Polar Science Center on their Arctic Domain Awareness flights.

“Our first ones were funded by the National Science Foundation,” said James Morison, senior principal oceanographer at the University of Washington’s Polar Science Center.

“Then we became funded, starting in 2012, by the Office of Naval Research to make Seasonal Ice Zone Reconnaissance Surveys monthly flights across the Beaufort Sea seasonal ice zone,” Morison said, “in order to learn the interplay of the atmosphere, ice and ocean as the ice edge retreats northward every summer.”

Kodiak’s proximity to the Arctic puts the Coast Guard air station in the perfect location for these flights to originate.

Said Morison: “The Air Station Kodiak C-130 group is critical to this because they are uniquely capable of getting our instruments in the water throughout the summer season starting as early as May before any ships can get up in the ice and continuing even into November after freeze up is underway.”

The flight partners for this month were the University of Washington, the Coast Guard and The National Oceanic and Atmospheric Administration.

“This flight allows us to make oceanographic measurements in a critical but remote part of the Arctic Ocean that has not been sampled since 1993 by a US Navy submarine,” Morison said. “These efforts are a wonderful partnership because we, meaning NOAA, Navy, Coast Guard and civilian scientists all need to understand the changing Arctic Ocean environment.”

Zhang Liu, research scientist at the University of Washington’s Polar Science Center, has been participating in these flights since 2014.

“We are dropping instruments in the Arctic to monitor temperature, humidity and winds,” he said. “We will use our data to improve forecasts and to better understand how the atmosphere, ocean and ice interacts.

Scientific partnership flights are always at the mercy of the weather as well as space available and critical current events.

“This time, we hope to fly through a storm as well, so that will be interesting to see how the water and sea ice can maybe modify the behavior of the storm and maybe how the storm can modify the sea ice,” Liu said.

Sonja Wolter works in NOAA’s Global Monitoring Laboratory in Boulder, Colorado. In collaboration with the Coast Guard, this NOAA group was able to install an atmospheric sampling payload aboard the partnership flights.

“NOAA has been participating in these flights since 2009,” Wolter said. “We’re interested in measuring greenhouse gases in vertical profiles over Alaska’s interior and along the coasts to monitor the Arctic for changes over time.”

These flights fly at varying altitudes while an in-flight NOAA technician queues the system in making measurements of greenhouse gases, methane, carbon monoxide and ozone.

NOAA’s equipment, along with the Polar Science Center’s numerous buoys and measuring systems, loads onto the C-130 on a large pallet. Air quality measurements are made through multiple tubes that are fit through a door plate specific to the flights. Air collection at different altitudes fills flasks for NOAA scientists’ examination.

Measurements taken allow NOAA to examine the environment of Alaska and the Arctic climate. Changes in emissions can predict a warming climate.

The data collection from the flights allows NOAA scientists to identify increases in greenhouse gases and carbon monoxide from pollution and wildfires, versus changes in these gases from wetlands and other natural emissions.

Along with Liu, Maddie Smith, a post-doctoral researcher at the University of Washington, is a member of the team dropping Arctic Drifting Buoys north of Alaska.

“The buoys will get dropped into the ocean,” she said. “The yellow cone will drop away with the parachute and a rod will spring up about two meters. It will measure air temperature and what is going in the atmosphere. Sensors below will measure the water temperatures.”

The drifting buoys can transmit information for as many as five years after deployment, though shifting and crushing ice may impede buoy longevity.

“If the buoys can survive the ice, they can go for a long time,” said Jim Johnson, a field engineer at the University of Washington. “It’s a matter of luck. Some buoys get frozen in and thawed back out. We place these buoys really far north, but sometimes they do wash up on the beach and we’ve had people drag them to villages like Utqiaġvik,” which was known as Barrow until 2016. “We’ve been contacted by people up on the North Slope, and then we can refurbish them and deploy them again. They have really good batteries.”

“The Arctic is undergoing rapid and unprecedented climate change,” said Kathryn McKain, principal investigator for the project at NOAA’s Global Monitoring Laboratory. “The atmospheric data over Alaska that we collect each year on the Coast Guard flights are important for monitoring and predicting the impacts of climate change on the global carbon cycle and Arctic ecosystems.”