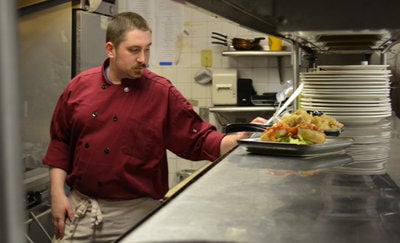 New Kodiak Inn chef Turturici Gil gets ready to prepare the next meal in his kitchen queue on Monday, Sept. 19, 2011. (James Brooks photo) 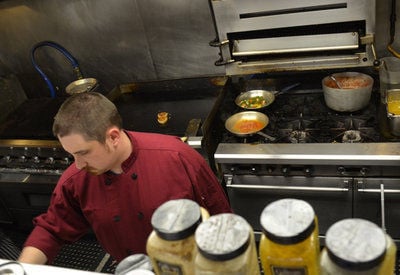 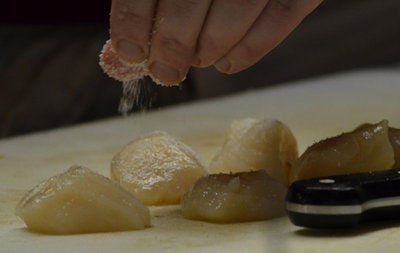 New Kodiak Inn chef Turturici Gil gets ready to prepare the next meal in his kitchen queue on Monday, Sept. 19, 2011. (James Brooks photo)

KODIAK — When chef Gil Turturici came to Alaska, he was looking for an adventure.

Instead, he found Kodiak, and a piece of home.

“Kodiak is just like the small town in Oregon I grew up in,” he said. “The rain doesn’t scare me. I really like Alaska and I like small towns.”

Chef Gil, as he’s known, is the new chef at the Kodiak Inn, which serves tourists and Kodiakans at the Chart Room Restaurant and Kodiak Harbor Convention Center.

That work is a far cry from his last job, at the West Rib Pub in Talkeetna, or the job before that, a farm-to-table, ultra-organic experience in northern California.

The goateed 33-year-old has big plans for the restaurant, beginning with overhauling its menu, which will change as early as next week.

And in the next month, “We’re going to be doing a pretty in-depth dessert menu,” he said.

A new kids’ menu and a new brunch menu will follow.

“I’m expecting a complete and total change … come the beginning of next year,” Turturici said. “The ultimate goal is to bring local people in here and share a really good time.”

Turturici knows food, having started in the restaurant business as a dishwasher at age 14. He became a chef without formal training, then decided to go to culinary school at age 26 to hone his skills.

“I had been a sous chef in a restaurant even before I went to culinary school,” he said.

Once at school, he specialized in baking and pastry, adding those skills to his arsenal of Italian cuisine.

Turturici has worked as an executive chef at a golf course and helped open an Italian trattoria.

“I’ve spent a lot of time in Italian food,” he said, and he expects that influence to show up in Kodiak.

“We’re going to be doing fresh pasta a lot,” he said, showing off a special goat cheese ravioli.

The restaurant has already invested in a $2,000 pasta machine, and Turturici is working on more to come.

Right now, the Kodiak Inn kitchen is under-staffed, something the new chef intends to fix as soon as possible. He also wants to ensure the materials he works with are as good as he can get.

“My goal is really fresh, quality ingredients,” Turturici said. He knows that sounds like a silly dream in Kodiak, but to him it’s all about planning and organization.

“What it comes down to is building a system,” he said.

When he’s finished overhauling the kitchen, he’ll be ready to present Kodiak with something unique.

“It’s definitely another animal … a cheetah with other spots,” he said.

Erdman Rentals FOR RENT: $575 per month, on Baranov Park

The attorney general is asking whether the governor may legally sign a budget bill that lacks a start date.

New study ranks most patriotic states: How does Alaska compare?

The findings placed Alaska as the runner-up among the 50 states, topped only by Montana at No. 1. Maryland came in third, Vermont fourth and New Hampshire fifth.