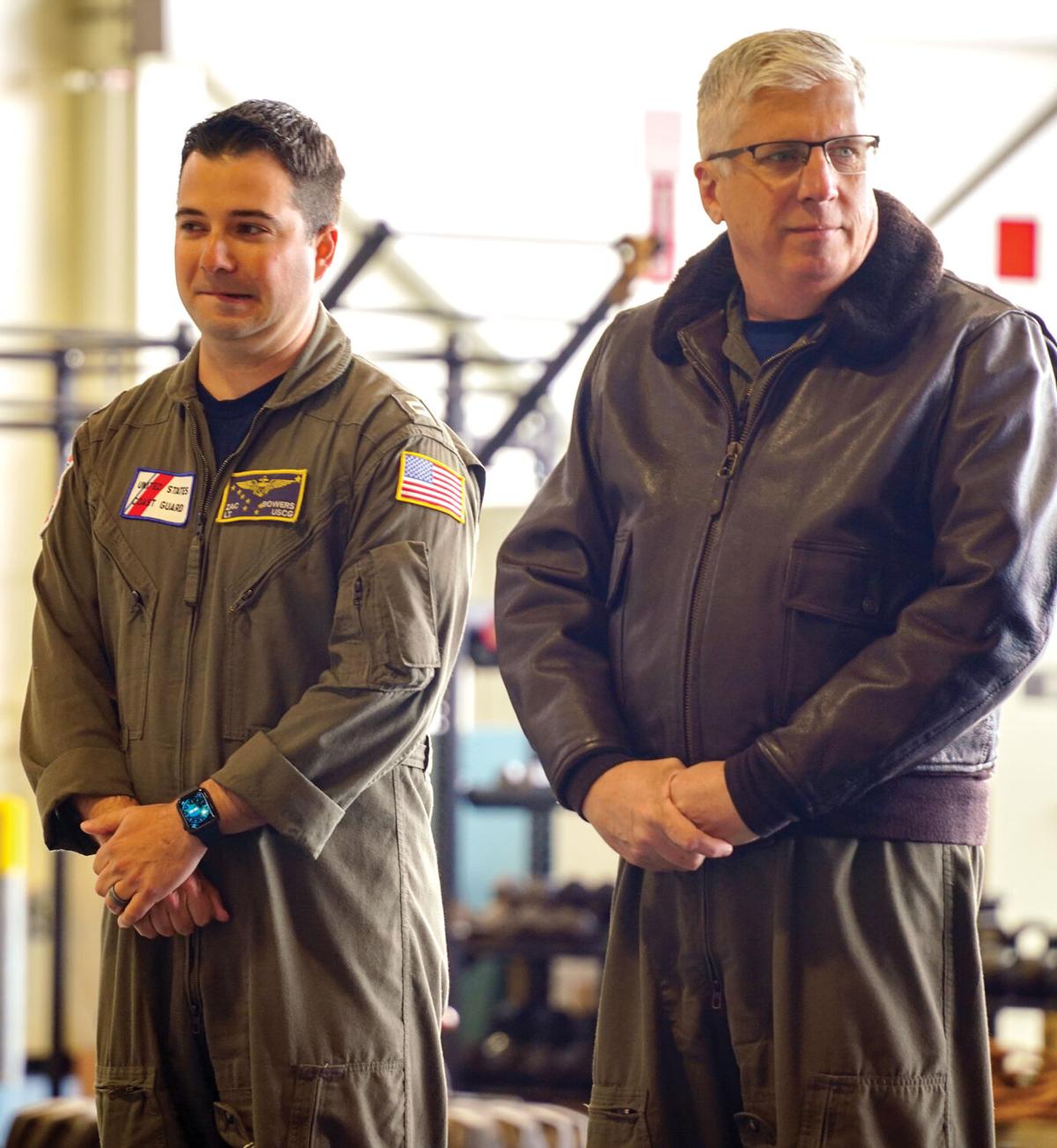 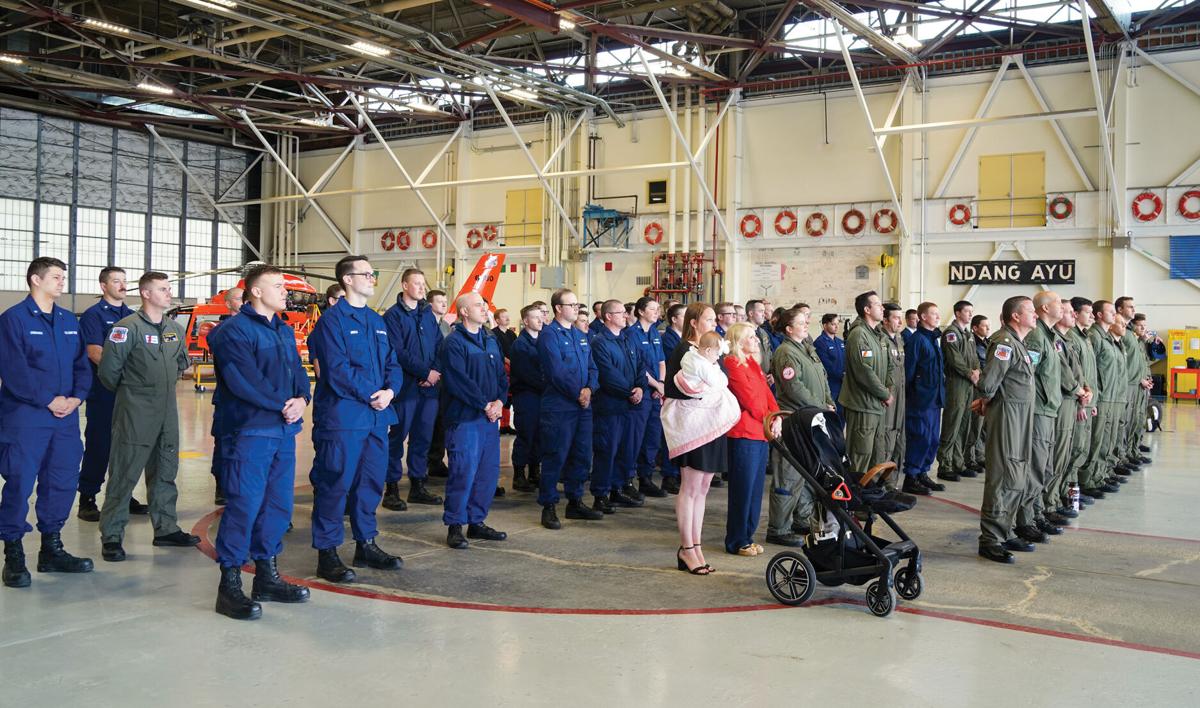 A nighttime flight to Dutch Harbor in extreme conditions, a last-minute second patient, communication problems and an unconventional takeoff were all elements in what led a Hercules C-130J Coast Guard pilot to earn an aviator award Thursday at Coast Guard Air Base Kodiak.

Coast Guard Lt. Zach Bowers was awarded the Exceptional Aviator Award by the Order of Daedalians for an Oct. 24, 2019, medical evacuation mission where he flew a C-130 to Dutch Harbor in the Aleutian Islands to pick up a 60-year-old man who needed a higher level of care.

When the C-130 touched down at Dutch Harbor, the Coast Guard team was met with an unexpected surprise — a high-risk pregnant woman who needed immediate medical care in Anchorage.

In a hangar full of fellow Coast Guard service members and family, and in front of the plane he flew nearly two years ago, Bowers received the award from retired Air Force Lt. Gen. Nick Kehoe, the head of the Order of Daedalians, and Air Station Kodiak Commanding Officer Capt. Bryan Dailey.

The Order of Daedalians is an organization of command aviators from across the military who promote young people to pursue careers in military aviation.

“This was a very significant mission you guys flew,” Kehoe said.

Kehoe noted Bowers was originally slated to receive the award in 2020, but COVID-19 restrictions at the time prevented him from traveling to Kodiak.

Kehoe said the award came from a base commander’s recommendation and put into a system with other nominees that the Order of Daedalians selects from.

“This is our way of saying thank you for what they did, and it could just be a handshake too,” Kehoe said. “In this case, Lt. Bowers was competing with other Coast Guard aviators — and that’s a tribute to the kind of people nominated. For those of you with forward mobility, you should take that lesson with you to never forget your people and thank them for what they do.”

He added that the award, while presented to Bowers, reflected the skill and bravery of the air crew as a whole.

“You guys fly as a group, whether helicopters or a C-130 or whatever. You don’t achieve anything without the team working together,” Kehoe said.

Bowers, in a brief speech, noted the award was a testimony to the Hercules plane crews in Kodiak and to his flight crew.

“This award is really for the Hercs in Kodiak,” Bowers said. “I just happened to be the one with the name who signed on the dotted line. C-130s aren’t usually in the spotlight a whole lot, we’re kind of the backbone getting things in the background. It really means a lot to show what we do to prove our worth up here.”

Dailey, Air Station Kodiak’s commanding officer, echoed Bowers’ comment that it was a unit award as much as it was for Bowers.

“I thought it would be a fitting occasion, especially coming out of the COVID piece, because we haven’t had a lot of opportunity to come together to celebrate,” he said. “This is a great win for our team because the Coast Guard recognized the Kodiak team for the actions here on that night back in October 2019 as the best thing Coast Guard aviators did.”

Bowers, after the ceremony, described the mission he and his crew faced as challenging.

“The information we got initially was there was a guy with respiratory failure, so we had to go out to Dutch Harbor in the dark,” Bowers said. “We normally don’t do that. It was the first time we took the C-130J out there in night. It’s a very fluid thing to go to Dutch Harbor in general because it’s a very hazardous airport to operate in even during the daytime.”

Bowers has served in the Coast Guard for 11 years and has been flying a C-130 for six years. He’s served at Air Station Kodiak for more than two years.

A window of decent weather allowed the C-130 crew to make the flight, but along the way the elements turned sour.

“We encountered a lot of wind at an altitude we weren’t expecting,” Bowers said.

During the two-hour flight to Dutch Harbor, the plane also lost communications with the Coast Guard, requiring the Bowers and his co-pilot to go against flight plans to descend to a lower altitude and better wind conditions.

“At the same time, we encountered an erupting volcano — I think it was Mount Shishaldin going off — and we weren’t notified of that so it added another piece we had to go around,” Bowers said.

The crew used night vision goggles to land at Dutch Harbor, which Bowers said was a nonstandard approach because of the airport’s terrain and layout.

Once the ambulance arrived at the airport, they were greeted with not one but two patients.

On top of the man with the respiratory conditions was a pregnant woman who was considered high-risk.

“We tried to make some calls and it didn’t work,” Bowers said. “I actually used the ambulance driver’s cell phone to try and call home to get approval.”

When that failed, Bowers said he made an on-the-spot decision to take on the second patient for transport to Anchorage.

“The physician that was with us said she was in pretty rough shape and if she had given birth there, we could have lost her and the baby,” Bowers said.

During the process, the weather turned worse, with less than a mile of visibility, sleet and high winds and wind shear.

He described it as “a couple of harrowing moments that felt like hours to me and the rest of the crew.”

Once out of Dutch Harbor and at an altitude above the horrible weather conditions, the crew was able to reestablish communications and make it safely to Anchorage.

“I heard a couple months later that the lady was able to have her baby safely 36 hours later and the gentleman spent a significant amount of time in the ICU but made a full recovery,” Bowers said. “That was a big win for us.”