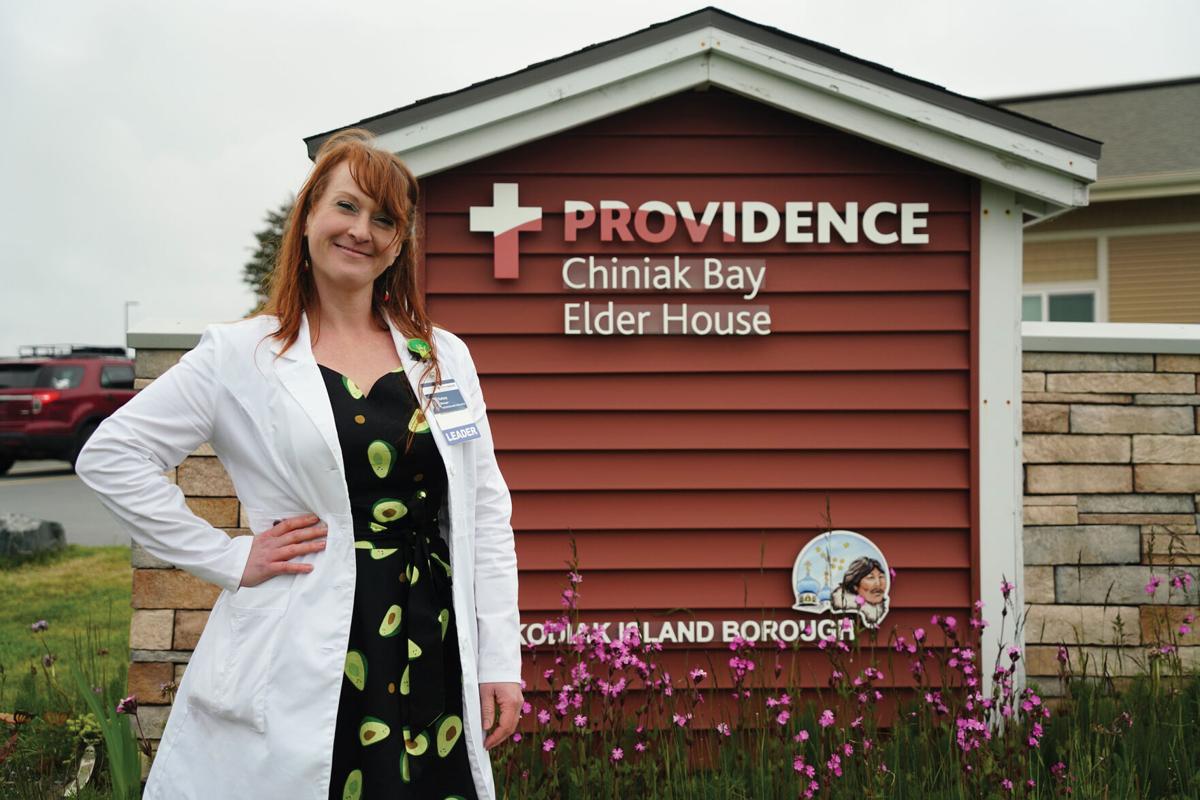 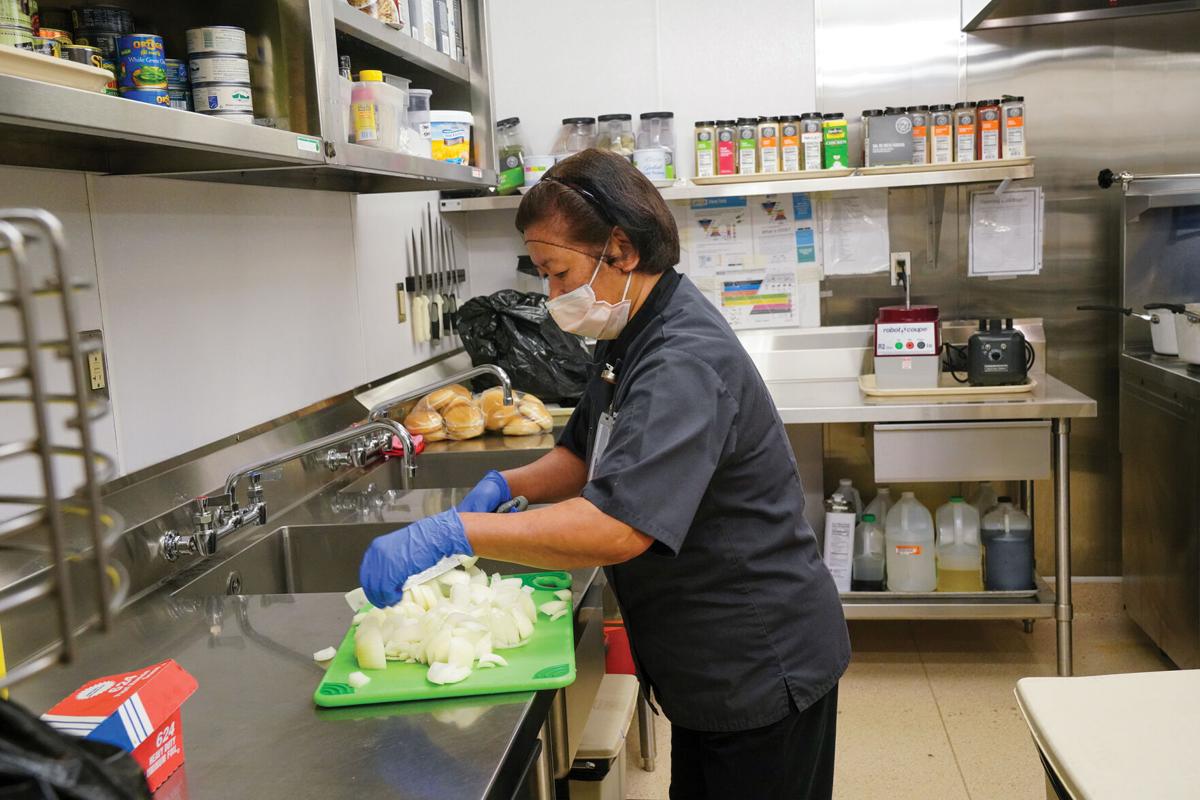 Doing so starts with promoting awareness of the idea, ensuring a steady supply of ingredients and making contact with local Alutiiq chefs, according to Fentress.

Fentress said she was made aware that Providence had an agreement with Island Seafood to provide fish donated by community members so that Elder House residents could enjoy local staples.

“I felt like if more people knew about this, more people would want to donate,” she said. As she researched the topic, Fentress realized “this was huge.”

“It’s part of a traditional foods movement that is happening all across the country, but specifically in Alaska,” she said.

The ability to provide local or culturally appropriate dishes is possible thanks to state and federal legislation in the last decade that approve the addition of traditional foods in public food service facilities, including nursing homes.

“Nursing homes are the most regulated health facilities there are, and for years it wasn’t an option to serve traditional foods because there was no regulatory agency that could inspect wild meats,” Fentress said. The same applied to wild fruits and vegetables.

“The federal government is moving toward a more person-centric model … so they want our elders to feel purposed and at home and be eating the foods they feel are nourishing,” Fentress said.

Conversations she’s had with some Elder House residents seem receptive to the idea, she said.

“We have a lot of Alaska Native residents that expressed that they don’t like American food, that they want ‘tuntuq’ (deer) or different foods,” she said. “I’ve asked if they would like more halibut or salmon or berries. They get so excited.”

Fentress noted that regulations still stipulate where the food and ingredients can be acquired or purchased from. Residents of nursing homes such as Elder House are among the most vulnerable, immune-compromised people.

In the last five years, some medical facilities, like ANCM in Anchorage, have decided to take advantage of the new legislation. Regulatory agencies were undecided within Alaska on how to provide safe oversight.

The Alaska Department of Environmental Conservation regulates wild game meat processing. The Department of Health and Social Services and U.S. Centers for Medicaid and Medicare agreed to approve nursing home consumption as long as long-term care facilities maintained proper documentation and DEC certified the processing places meat was purchased from.

For example, a resident who donates fish or deer must fill out a transfer-of-possession form from the Department of Fish and Game and prove the source is in good condition (not diseased, was butchered, dressed, transported and stored to prevent contamination and won’t impact health).

Donations would also have to follow certain guidelines: Game meats could only be provided in whole, quartered or roasts, fish need to be gutted and gilled with or without heads, and plants need to be whole, fresh or frozen.

“Community members donate, Providence as a nonprofit pays for the processing and our elders get to enjoy the local foods,” Fentress said. “Especially with an Alaskan Native culture, they want to eat the food they were raised with.”

The list of acceptable donated foods include most wild game meat (such as dear, sheep, moose and goat), fish, seafood, marine mammal meat and food (specifically maktak and seal meat), plants such as fiddlehead and sourdock, berries, mushrooms and eggs.

Unacceptable donations, for the time being, include meat from foxes, bears/polar bears and walrus, seal or whale oil, fermented game meat, meat that is canned or vacuum sealed at home, seafood smoked or dried outside a seafood processing facility such as Island Seafoods or Kodiak Island Smokehouse, and molluscan shellfish.

While guidelines exist on what food sources can be used, Fentress said Providence will take a phased approach.

“For 2021, my goal is to just bring awareness to the community that people have the opportunity to support the elders in this way and get a steady flow of food being donated to the smokehouse or Island Seafoods,” Fentress said, “and see how the Elder House residents respond to it.”

Her first phase for food would include easily prepared foods, while also gathering feedback from residents and collecting recipes.

“We’re going to start with wild game and fish and berries,” Fentress said. “We can easily incorporate those items into the menu we already have. For our stroganoff, we can use venison instead of beef, or venison sausage patties instead of pork sausage, or use fresh fish instead of the frozen farmed ones from far away.”

She said the Elder House’s kitchen staff will need to undergo training, following the federal and state regulations and ensuring the proper resources are in place.

“It will be a slow process to make this happen effectively. We don’t want to jump into it and then fall by the wayside because we don’t have the right things in place,” Fentress said. “I don’t want to overload my staff with a bunch of foods that they have never prepared before.”

She added, “We are going to have to have some experts in the community to train us … and do our research as we move slowly into this.”

Another step in preparing will include partnering with local Alutiiq organizations and chefs.

“Getting well-loved recipes … would be a way for the community to engage with the elders,” she said.

Phase two might include incorporating a new traditional recipe on a weekly or monthly basis.

Fentress said recipes that might require more unique items such as wild mushrooms or fiddleheads will be slower to incorporate, to ensure they are properly prepared or don’t pose a health risk to residents.

She added that it’s a step toward being more self-sustainable, as Providence imports most of its food from U.S. Foods.

“There are a lot of options that our residents might really enjoy,” Fentress said. “It would also help with the food service aspect too because people in the kitchen might not know how to cook venison in a way that is palatable.”

She noted that those who ushered in the legislation to make cultural dishes possible have helped create plenty of opportunities.

“We could ignore things and continue as we’re doing, or we could say, ‘Hey, how can we move into the future and provide a way better service for our patients and residents,’” Fentress said.  “Food is comfort and love, and we all feel that when you have a nice, hot plate of food that you were raised on and enjoy, you feel happier and interested in eating more.”

She added that she would like to also explore recipes from the Philippines, as the Elder House has a number of Filippino residents.

“As a dietician, a lot of these traditional dishes are really healthy,” she said, “and can help with dementia or skin breakdown or other issues.”

The biggest project in Fairbanks this summer is the Third Street widening project.

One by one, family, friends and colleagues placed a white flower on a shelf at the wall, as the name of each fallen hero was publicly announced.

List of candidates filing for local office increases, including a former state lawmaker

The filing period ends at 5 p.m. Thursday, and a lot of names are already signed up to run. It's going to be a busy election season.