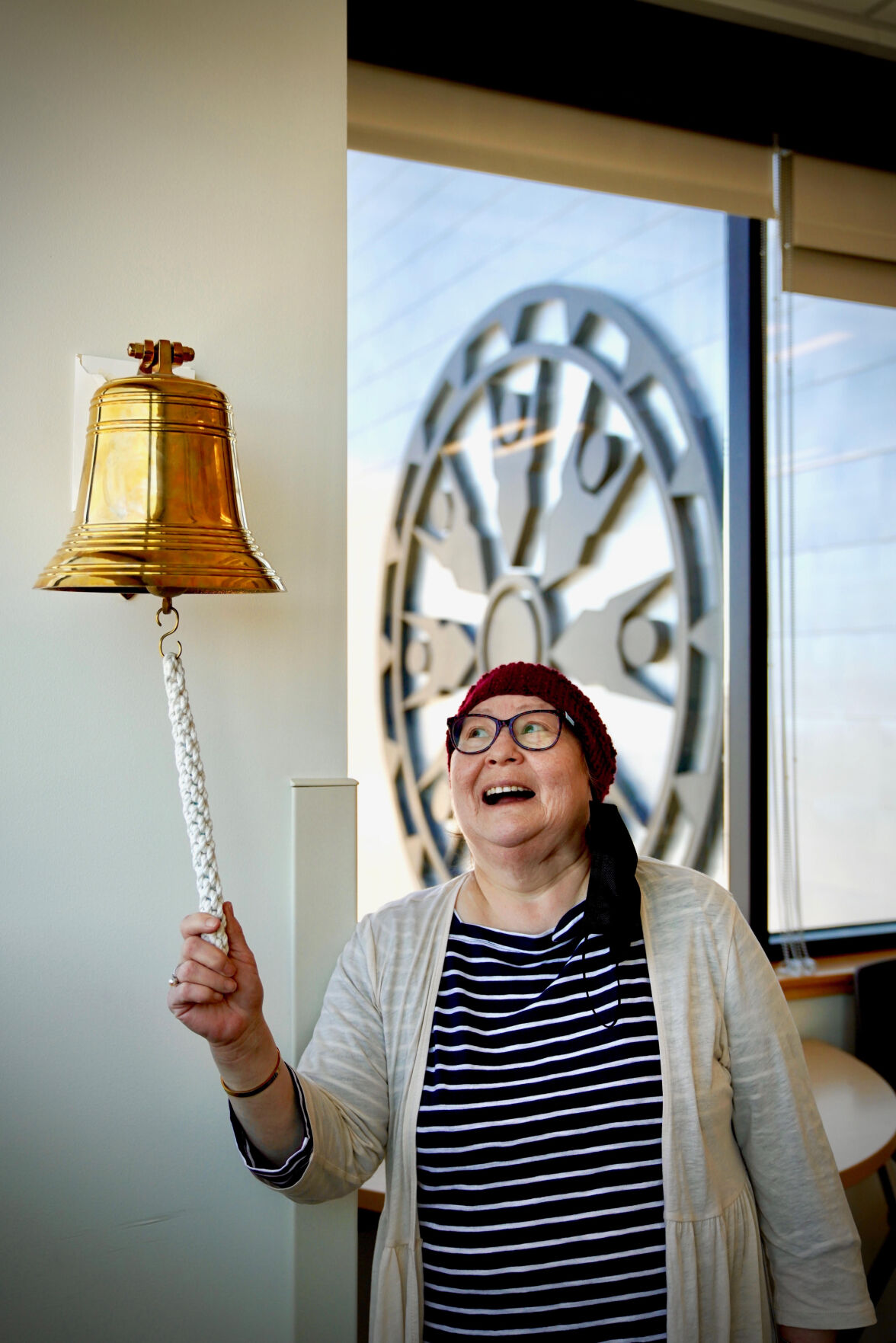 Vickie Panamarioff from Ouzinkie is shown celebrating the day she finished chemotherapy. 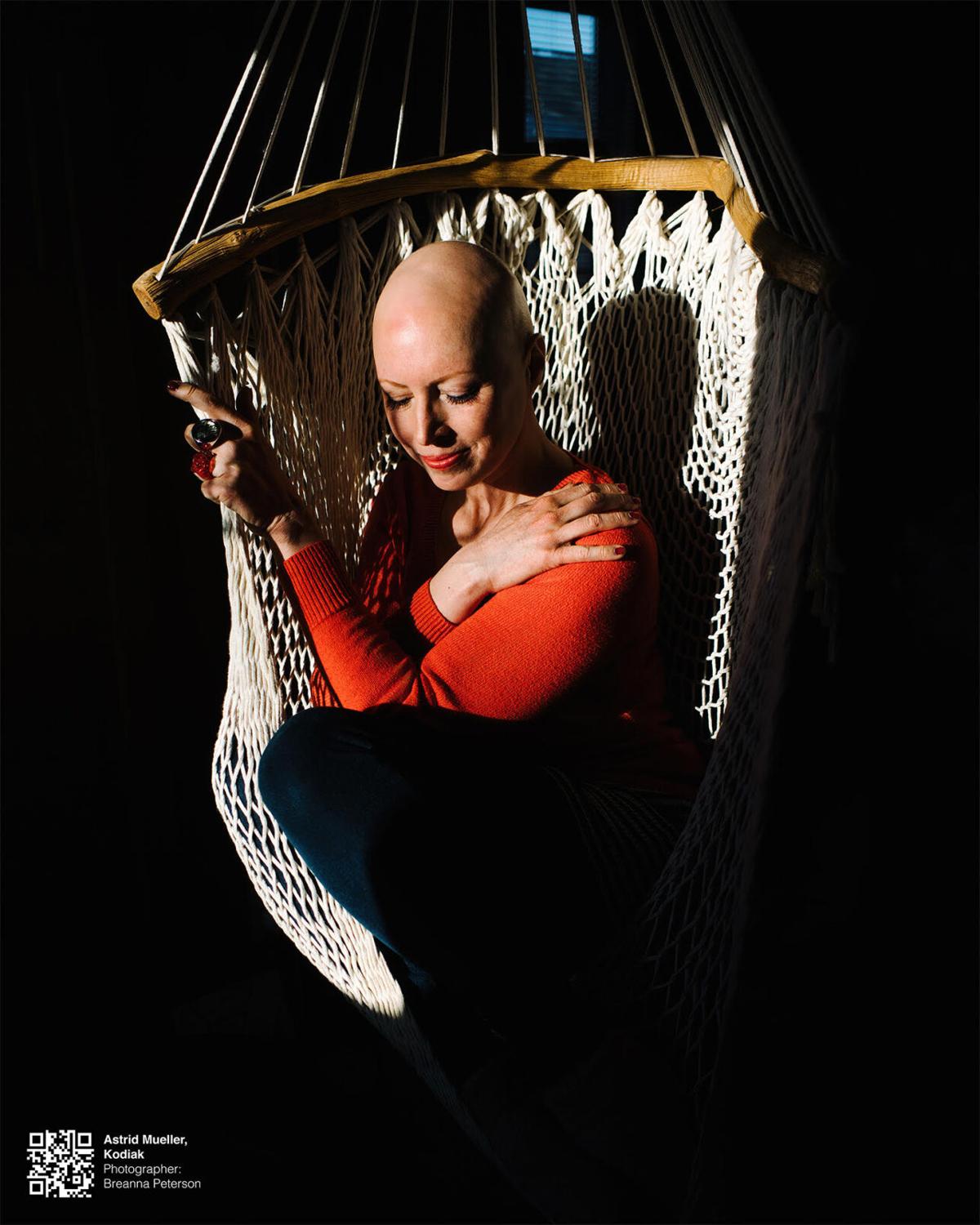 Astrid Mueller lived in Kodiak before she was diagnosed with cancer. After chemotherapy and surgery, she moved to Palmer and is now writing a book about her experience.

Vickie Panamarioff from Ouzinkie is shown celebrating the day she finished chemotherapy.

Astrid Mueller lived in Kodiak before she was diagnosed with cancer. After chemotherapy and surgery, she moved to Palmer and is now writing a book about her experience.

When Vicki Panamarioff found out she had cancer, she was shocked. She didn’t know what to do, so she kept her diagnosis hidden from her friends and family for weeks.

Eventually it came out and, last November, she left the island and traveled to Anchorage for treatment, where she went through eight rounds of chemotherapy.

The day that she completed chemotherapy was captured on camera and is on display in the Anchorage Public Library as a part of the Pandemic Portraits exhibit.

Pandemic Portraits celebrates women like Panamarioff, who went through cancer treatment during the pandemic. The exhibit consists of portraits of 16 women. Each photo was taken by a different photographer who worked with the women featured in the exhibit to find the best way to capture their experiences going through cancer treatment, according to Mary Katzke, the executive director of Affinityfilms Inc., the entity that created the exhibit.

Each photo is accompanied by audio recordings about these women’s stories, which can be accessed through the QR codes at the bottom of the photos. The recordings were scripted by Deb McKinney, co-author of “Beyond the Bear,” and narrated by the actress Michelle Conklin.

Katzke wanted to highlight the women who are doing “double duty,” or going through cancer treatment while trying to stay healthy during the pandemic.

“[Women are] caretakers in the family,” Katzke said. “They’re the ones who nurture the children and do the majority of the housework in most cases, so when they need help it is very hard for them to ask for it.”

Katzke herself battled with breast cancer.

“I never went to a single doctor appointment or chemotherapy appointment or survey without a loved one near,” Katzke said. “I just thought, ‘How are these women doing this?’”

However, even with those three, there were still battles Panamarioff had to fight alone.

She was sick through every holiday and, on Christmas Eve, she got a terrible lung infection which put her in the hospital until after the new year, Panamarioff said.

Even after chemo, her cancer still impacts her. Her cancer is incurable, so she still needs to have treatment every six weeks, but that treatment isn’t nearly as painful as chemotherapy, she said. She had to say goodbye to Ouzinkie and move to Kodiak for easier access to medical care. Currently, she is living with Natasha.

In addition to Panamarioff, Astrid Mueller — the poster woman for the exhibit — also lived in Kodiak.

After Mueller was diagnosed with breast cancer last fall, she was rushed to Anchorage for treatment and she spent the winter there alone. Mueller, who lived in Switzerland before moving to Kodiak, had no family in the country and she knew next to no one in Anchorage, according to the recording about her in the exhibit.

“The way I experienced treatment was very challenging,” Mueller was quoted in the recording. “Patients didn’t talk to each other. Everyone was separated. Fluorescent lights, no fresh air, terrible furniture. It was very depressing.”

But these women kept fighting and life marched on.

“I was never scared I was going to die,” Mueller was quoted saying in the exhibit. “That’s been really, really huge, not having that looming over our heads. When we feel at peace... our body heals. When we’re freaked out and stressed out, our body does not heal. We can do so much when we come from joy.”

This year, Panamarioff will be able to spend the holidays with her family, and they plan to make up for lost time. Panamarioff is especially looking forward to “dessert day,” which is a special holiday that her mother created. The night before Thanksgiving, Panamarioff, her siblings and her children will all gather together and eat desserts so that they can fill up on a turkey dinner the next day and not worry about saving room for sweets.

Pandemic Portraits will remain in the exhibit until the end of the month. It’s a moving exhibit — it’s already been in Homer and Dutch Harbor/Unalaska, and in February it will be in Fairbanks. Affinityfilms is currently searching for more people to display the photos. Hosts would have to pay for the shipping prices, but other than that hosting the exhibit is free. More information can be found at www.affinityfilms.org.