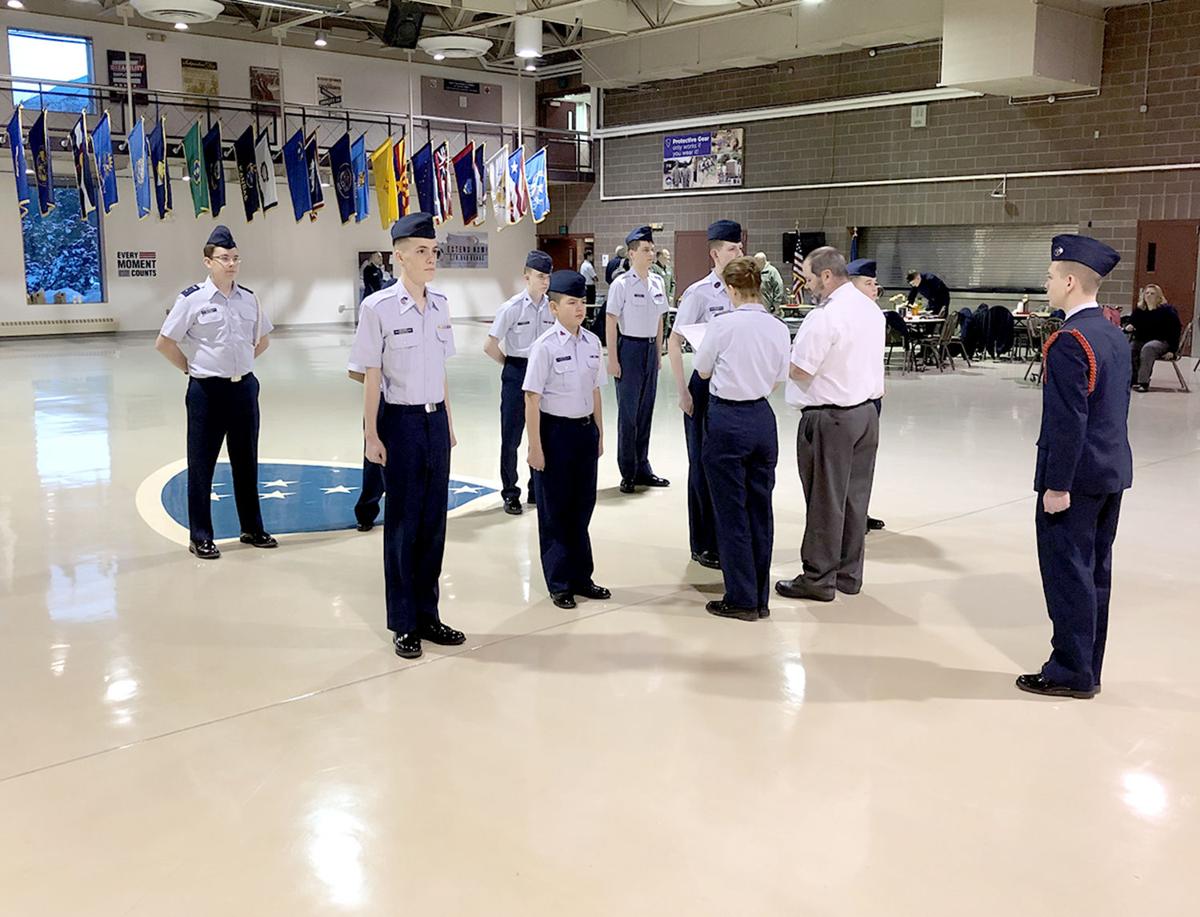 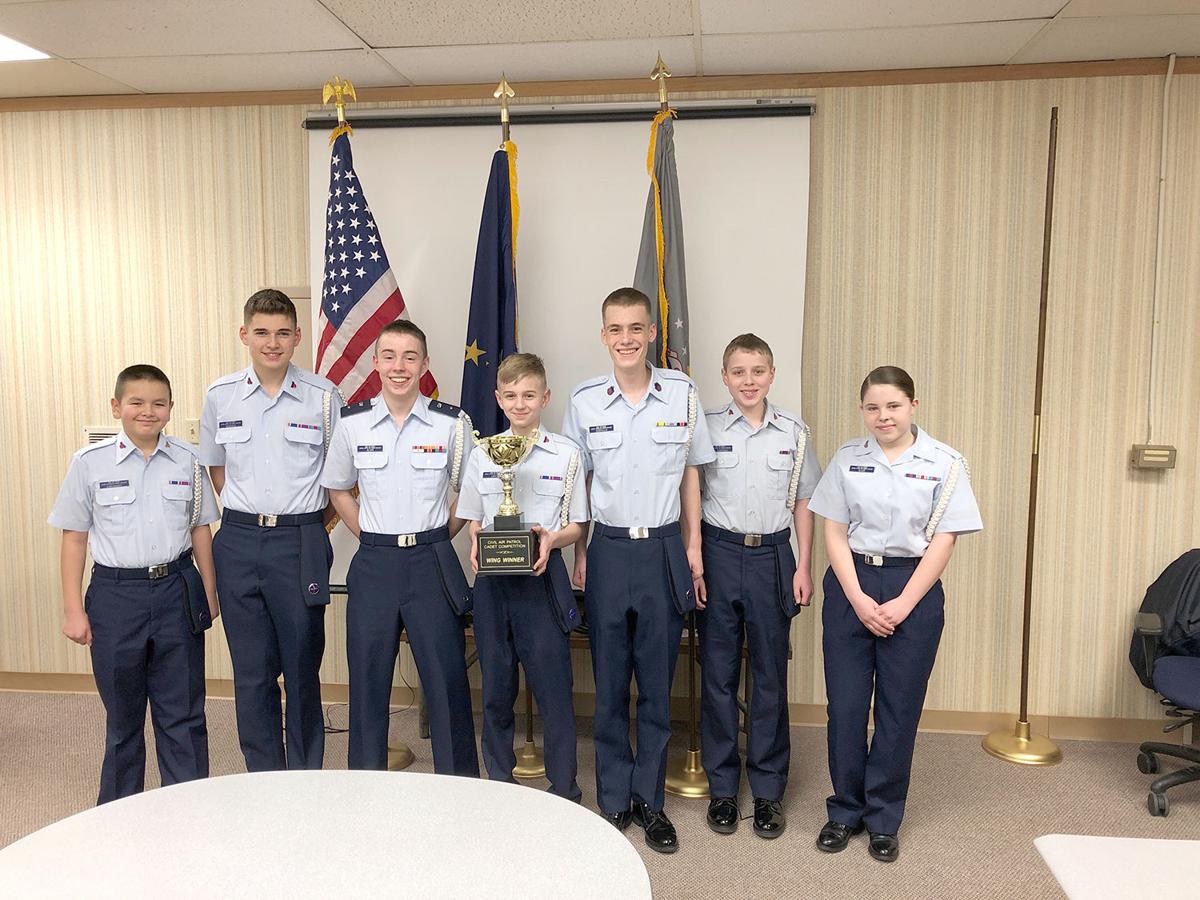 Until last weekend, the Kodiak Civil Air Patrol Squadron had never sent cadets to an annual state color guard competition in its 30-year history. Yet, a team of seven Kodiak cadets took the top spot against three other teams on Sunday.

The Kodiak cadets dominated in six of the eight elements of the competition, according to the Kodiak CAP’s deputy commander Capt. Edward Stickel.

“We had a very dedicated team who was very focused on the events,” Stickel said. “We’ve been practicing since December for this competition. Because of the unity of the team, we were able to get through and do very well.”

The first event was a team leadership competition which involved the completion of a unique task; Cadet Tristen Klier took the lead for Kodiak.

“In this case, it involved putting a bunch of chairs and tables together and the need to get one team member from (one) side to another by following a very specific set of rules,” Stickel said. “There were a lot of different handicaps that required the cadets to work together as a team.”

Other events included a written exam that covered knowledge of drill formations and aerospace current events, a uniform inspection and placing cadet achievements on a uniform properly without measuring tools or assistance.

Cadets also competed in physical fitness exams that included sit ups, pushups and a one-mile run. Additionally, there was a Jeopardy-style event testing on cadet practices and aerospace topics, as well as a leadership speech contest.

“We were the only team with a positive score in the Jeopardy event at 2,400,” Stickel said. “The closest team to us had a negative score of 2,400.”

He added that it allowed the cadet team to better understand its own capabilities when competing against other teams.

Klier said the leadership speaking contest was the most challenging event for him.

“I’ve only had to do that once before as one of my achievements,” Klier said. “I’m not very good at public speaking, so it was a goal to make the time limit and answer questions, but it was the most stressful event for me.”

Costello noted that the outdoor practical event (flag raising) proved challenging because of the weather conditions.

“We had to improvise a lot with things at the end just because it was so cold out,” Costello said.

Icy ground created slippery footing while cadets attempted to conduct a proper presentation of the flag.

The Kodiak Civil Air Patrol was chartered in 1989; it’s one of 14 such units in the Pacific Region Alaska Wing. There are three types of squadrons in the Alaska Wing: cadet, composite and senior (adults only), with Kodiak having a composite squadron of 20 cadets and 13 senior members.

He said the Coast Guard’s presence on Kodiak Island doesn’t require the Kodiak Squadron to have as large a focus on emergency services as other units in the Lower 48. However, squadron members still keep up on training for missing person searches and disaster relief.

The Kodiak cadet team will represent Alaska in the Pacific Region Cadet Color Guard Competition, to be held in Ontario, California, at the end of March.

Stickel said that the squadron still needs to raise $4,000 of the $8,000 required to go in the next two weeks. Local businesses have already help contribute half the amount needed He added that the goal is to arrive early in Ontario on March 27. The competition runs March 29-31.

Stickel said he anticipates a challenge for the cadets.

“California and Washington both have some very good cadet teams,” he said. Nonetheless, he expects Kodiak to do well.

Veterans get connected to services and resources with Stand Down

Greeted with music and hot meals, veterans were connected Saturday with the services they need most.

A lot of people are opposed to the Covid-19 vaccine. These women changed their minds after seeing first-hand the effects of the disease.

Nearly 50% of women in Alaska have experienced physical violence by an intimate partner during their lifetime, according to a new survey released last week.