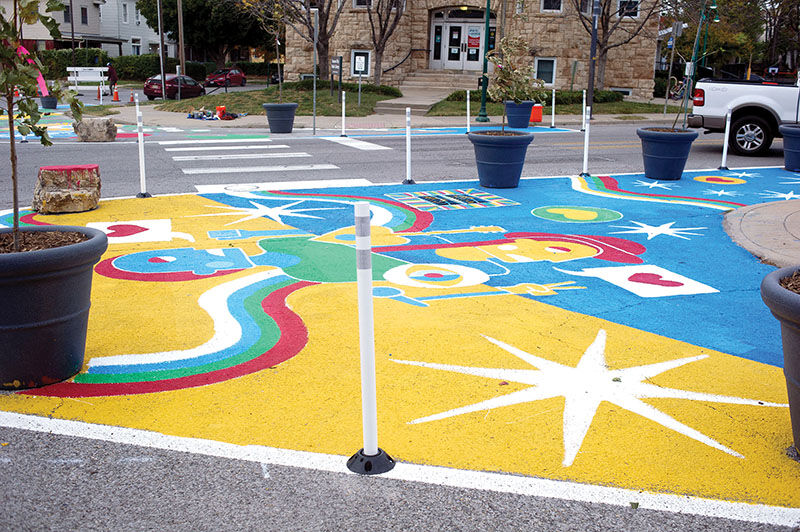 This street mural in Kansas City, Mo., was funded by a 2020 Bloomberg Philanthropies grant similar to one Kodiak received this year. 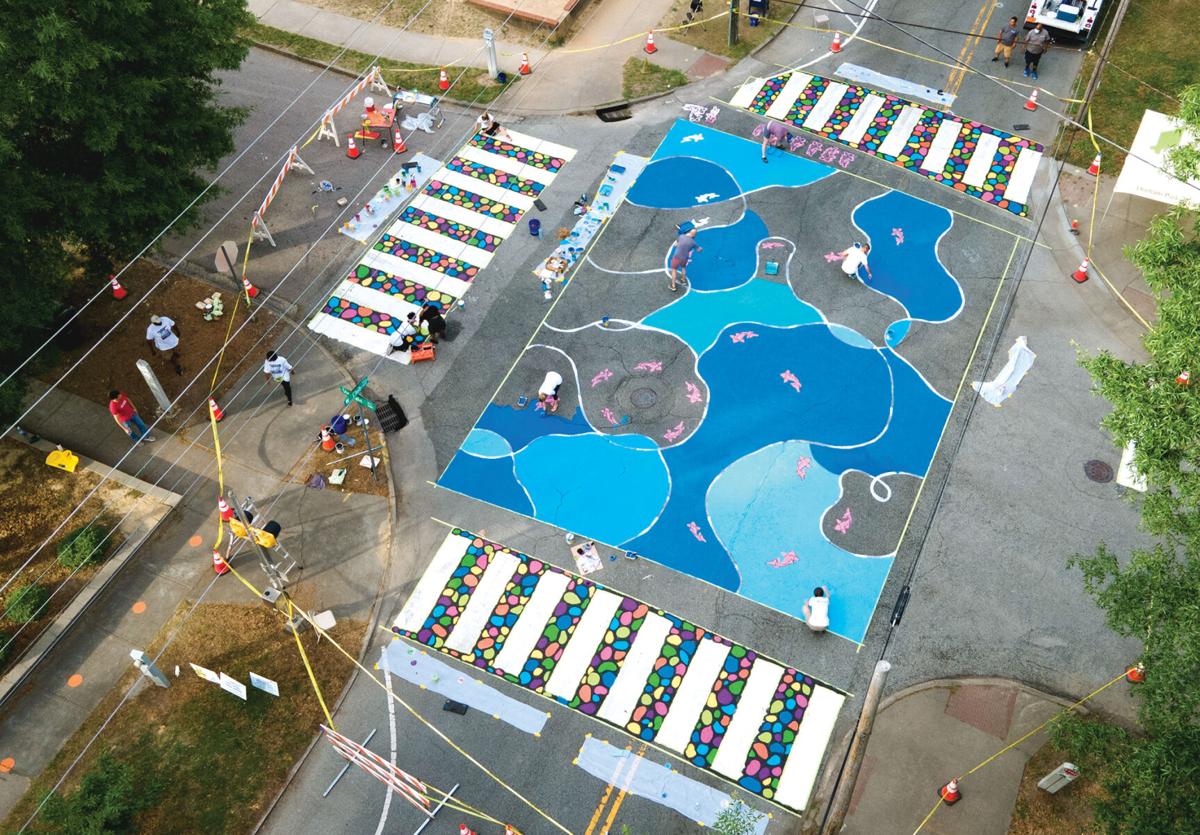 This street mural decorates an intersection in Durham, N.C.

This street mural in Kansas City, Mo., was funded by a 2020 Bloomberg Philanthropies grant similar to one Kodiak received this year.

This street mural decorates an intersection in Durham, N.C.

Visitors to downtown Kodiak will be greeted by splashes of color next summer once a street mural planned for the Center Street-Marine Way intersection is completed.

The goal is that it sets the tone for revitalizing the downtown area, said Sarah Harrington, Kodiak History Museum’s executive director.

A local artist or artists will be selected to paint the mural, using a $25,000 grant awarded by the Bloomberg Philanthropies in partnership with the Rasmuson Foundation.

“It’s a really exciting project,” Harrington said. “(Mayor) Pat Branson sent it my way and encouraged me to apply.”

The idea behind street art, according to Harrington, is to revitalize public spaces and engage residents of the community.

Kodiak is one of two Alaska cities awarded grants out of 26 recipients nationwide. The Fairbanks Area Surface Transportation Planning agency received its grant under a separate category meant to improve pedestrian safety and public spaces, the Fairbanks Daily News-Miner reported.

Harrington said the Bloomberg grant was available to nonprofits that partnered with municipalities.

“In this case, the Kodiak History Museum partnered with the City of Kodiak to submit Kodiak as a potential site for an installation of public art on pavement,” Harrington.

Harrington said the grant is unique and the project will be the first of its kind locally.

“The funding is for an initial application of the art, and the city agrees to continue the program forward,” Harrington said.

“The city was very proud to partner and collaborate with the Kodiak History Museum on a project that will bring more art to our downtown area,” said Bran son. “The city is always looking to partner with different agencies to improve our quality of life.”

The Center Street-Marine Way intersection was selected for a few different reasons, according to Harrington, including because it’s recognized as the geographical heart of Kodiak.

“This is where our community began before Kodiak was really a town,” Harrington said. “It’s where ships docked and people have come in from.  Even today, with the ferry terminal and visitor’s center, we recognize it as a focal point and as a way to beautify the downtown area.”

She said the area sees heavy foot traffic from community members and ferry passengers and serves as the location where cruise ship passengers are taken after disembarking.

“This program is really an incentive for recognizing and supporting local artists in the community,” Harrington said.

According to a Bloomberg Philanthropies news release, the grants build “on the success of Asphalt Art Initiative projects in 16 U.S. cities that were awarded support in 2020.”

“Basically, it just shows that street art is a relatively low-cost and high-impact way to share public art in communities like ours,” Harrington said.

Other organizations, including Kodiak Arts Council and Discover Kodiak, helped with the grant process.

“We pulled in the Kodiak Arts Council, recognizing it was appropriate for them to be involved not only for this program but also supporting the city’s pilot program as it moved on in future years,” Harrington said.

She said the Alutiiq Museum and Discover Kodiak were pulled in as the grant also aligned with their missions and because of their locations near the site of the future mural.

Kodiak History Museum and Discover Kodiak’s tourism office in the ferry terminal building are right on the site, while the Alutiiq Museum is a short walk.

The process starts in January, according to Harrington. The Arts Council will put out a call for proposals and a committee will review the proposals submitted by local artists through February before making a selection.

Katie Oliver, executive director of Kodiak Arts Council, said her organization was excited to be part of the process and happy that Harrington and her team pursued the grant.

“This is a great opportunity for local artists to bring their work large-scale into a highly visible and prominent place,” Harrington said. “I really appreciate the fact that the process includes compensation for artists for the design phase and execution, because that’s a really important thing. I hope we see lots of local candidates in the application process when it starts.”

The design process will take place in March and April and installation will happen in May, followed immediately by an opening ceremony.

According to Harrington, the mural will remain in place for a year, with a closing ceremony planned for June 2023 and its removal shortly after it.

“We will be using a specific paint that is used on the Kodiak’s roads and, given the wear and tear, that is why we gave it a life span of a year,” Harrington said. “The installation and lifespan is to honor and protect the integrity of the artist by making sure it looks great the whole time.”

FIRST STROKES ON THE CANVAS

Harrington said since the project will be a pilot for future projects, solid conversation has already taken place.

“The committee has already had some great talks about other projects they would like to see moving forward,” Harrington said. “Things like art installations at crosswalks or leading paths for cruise ships that would lead to the different museums or other spots that people commonly ask directions to.”

Harrington said the initial mural will serve as an inspiration.

“I think there will be a lot of different iterations on how this pilot project will continue to serve Kodiak even after this first-year installation thanks to funding from the Bloomberg Philanthropies Foundation,” Harrington said.

“The city has had a revitalization committee in place for years now and they have done projects,” she said.

Harrington said other projects have helped beautify the downtown area in the past, including 28 trash cans wrapped in vintage salmon labels and a map of the archipelago on lids. The trash can idea was spearheaded by resident Bruce Schactler, with the help of local businesses and organizations. The city completed the project in March 2016.

“It’s a big effort to preserve the character of the downtown area as so many of our businesses move up toward Mill Bay,” Harrington said.

Oliver, with the Arts Council, said public art benefits the community as a whole.

“Public art is unique in that it brings artists and their creative vision together with the public square,” Oliver said. “There’s obviously a beautification and esthetic enhancement that comes with public art, which is important in a place like Kodiak, which can be somewhat monochromatic.”

Projects such as asphalt and street art are essential parts in that, she said, something echoed by Bloomberg in the news release announcing the grants.

“Asphalt art projects help cities reclaim public spaces, make them brighter and safer, and build community — all important goals, especially amid the continuing hardships of the pandemic,” said Bloomberg, founder of Bloomberg Philanthropies. “Cities that tap into the power of public art bring new life and energy to city streets, inspiring residents and fostering a shared spirit of neighborhood pride. There can be real civic strength in public art, and this program helps cities capitalize on it.”

Fairbanks intends to use its grant projects to enhance pedestrian safety and enhance public space, the News-Miner reported. A part of Fifth Avenue in Fairbanks from Cushman to Barnette streets will display a mockup of wider sidewalks and landscaping. Lacey Street between 10th to 12th avenues will have asphalt murals to demonstrate what a blended corridor and linear park design would look like.

Oliver said there has been precedence set in the past with other programs on a smaller scaller.

“We have had work for artists through the Pursuit for Art program when we have new construction,” Oliver said. “But this project is a little different in that it’s for the public square outside, so that’s a cool new opportunity for local artists.

Oliver said she’s hopeful the project will serve as inspiration for future projects.

“I think when the design is executed and the public enjoys the space, there will be a natural progression to start looking for other spaces to be enhanced through this type of work,” Oliver said.