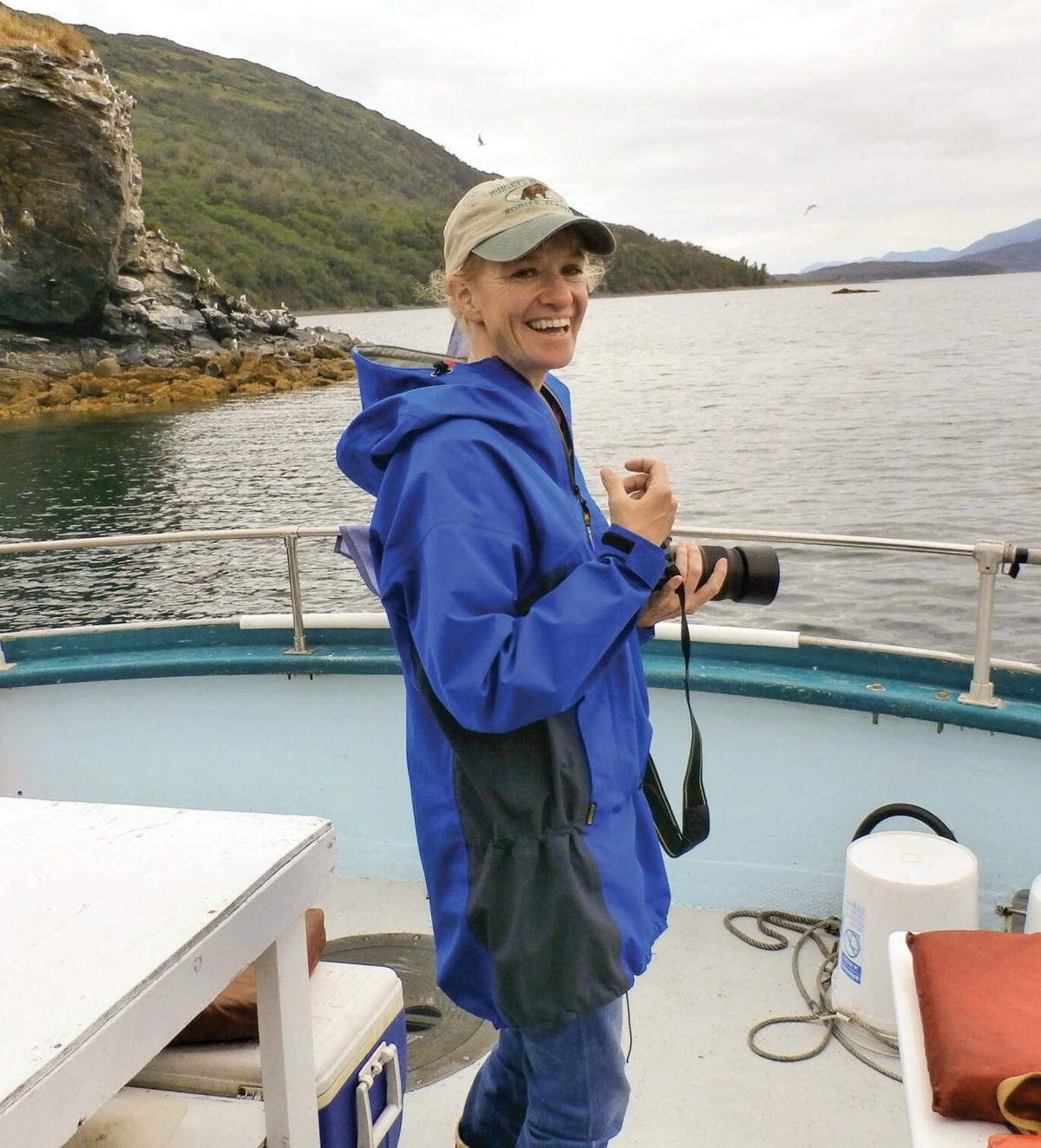 Robin Barefield leads a boat excursion from Munsey’s Bear Camp, which she owns with her husband and where they live year-round. 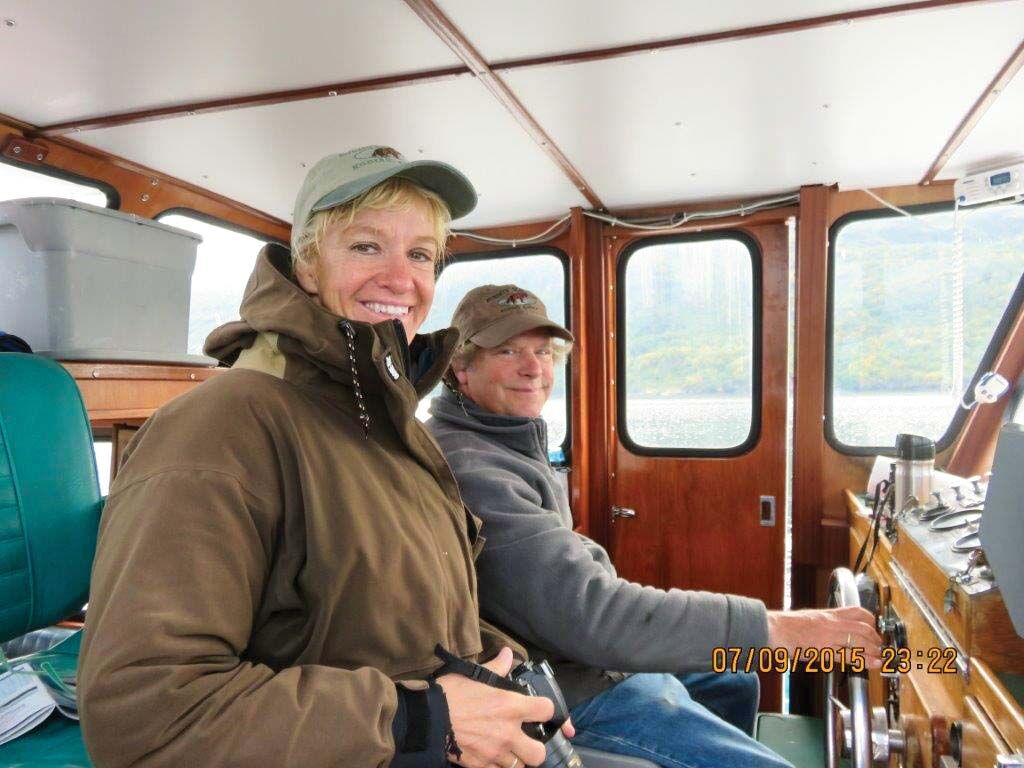 Robin Barefield and her husband Mike lead boat excursions from Munsey’s Bear Camp, which they own and where they live year-round. 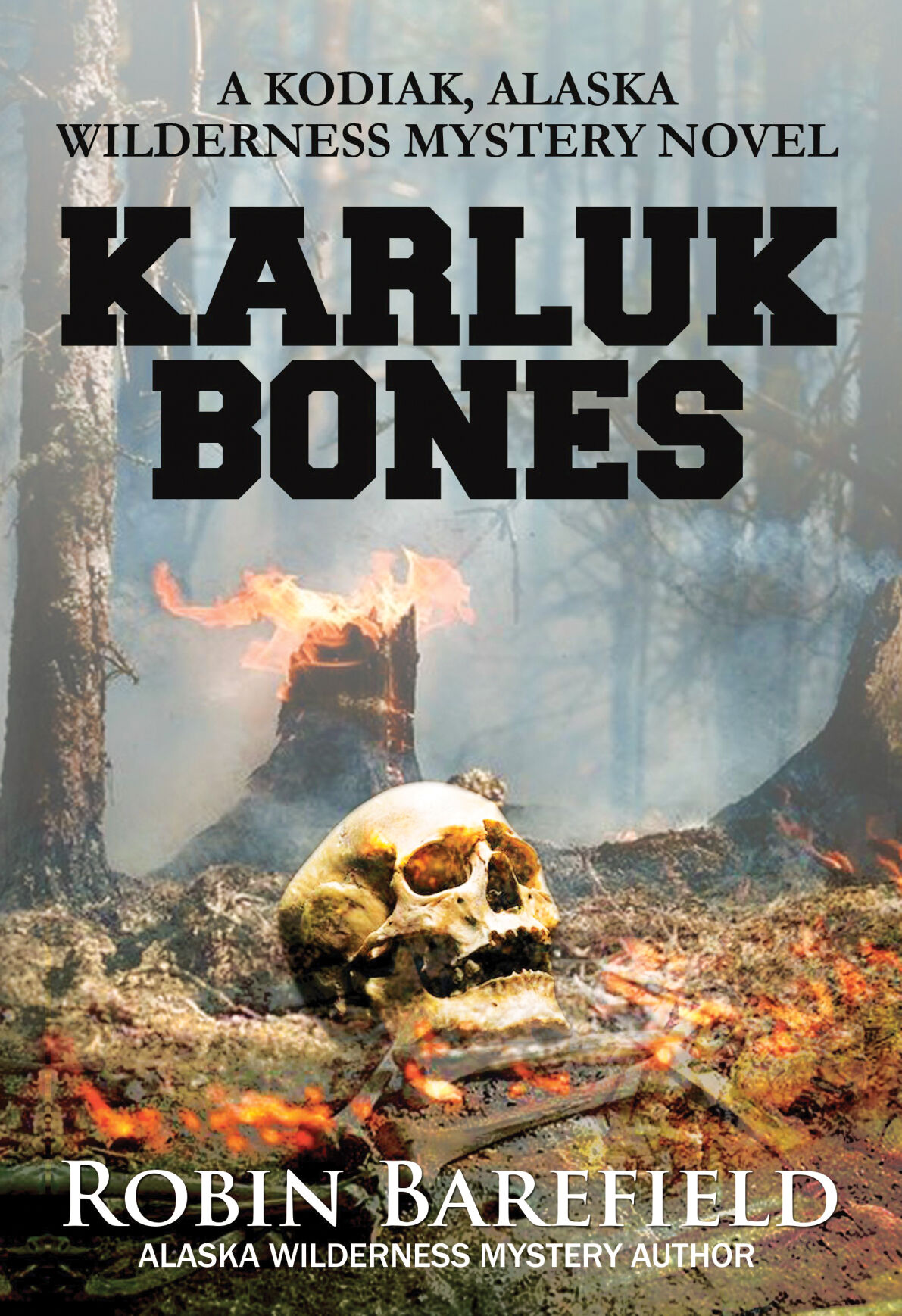 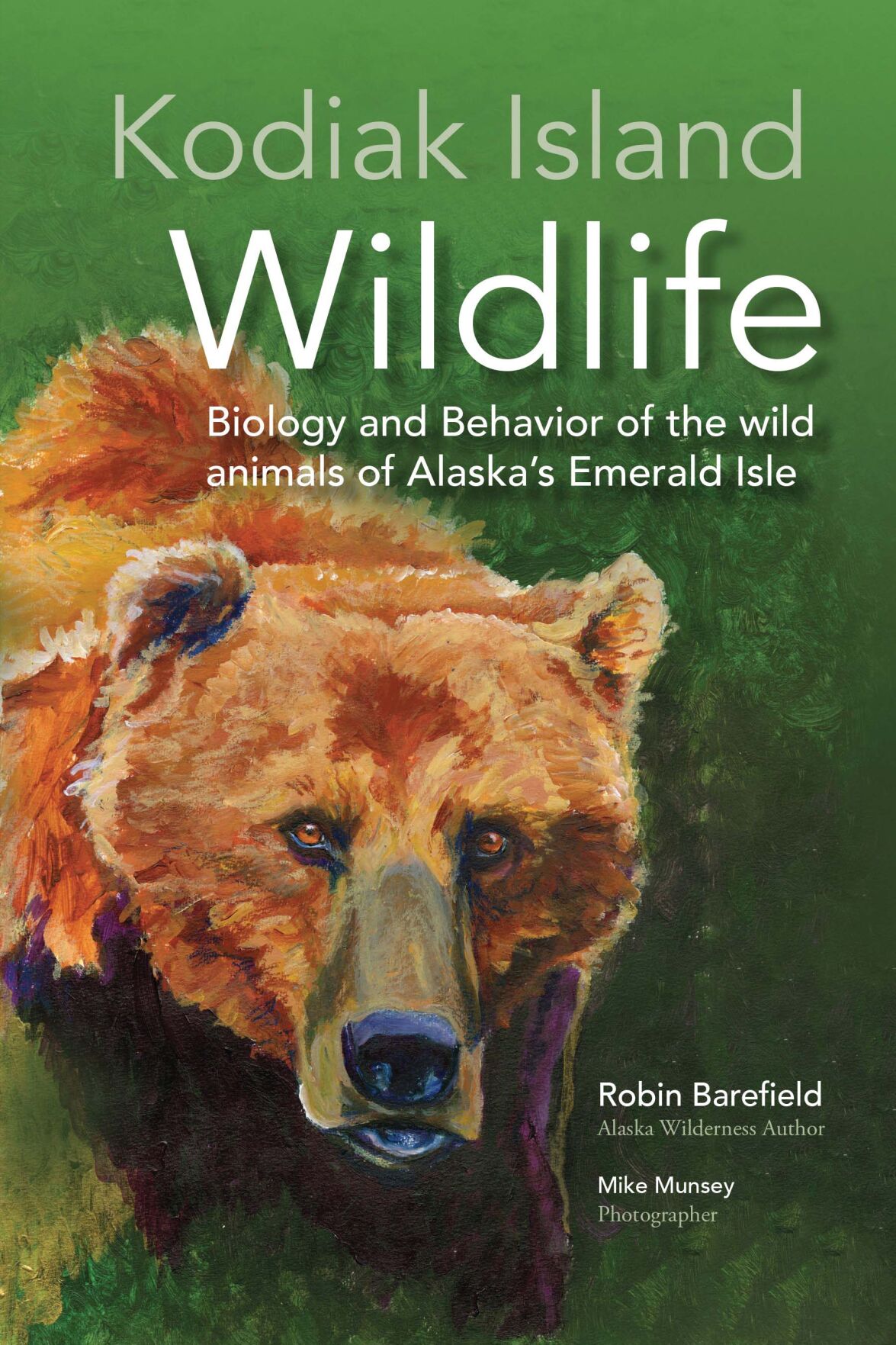 The cover of Robin Barefield's upcoming book "Kodiak Island Wildlife," which will be published in late April.

Robin Barefield leads a boat excursion from Munsey’s Bear Camp, which she owns with her husband and where they live year-round.

Robin Barefield and her husband Mike lead boat excursions from Munsey’s Bear Camp, which they own and where they live year-round.

The cover of Robin Barefield's upcoming book "Kodiak Island Wildlife," which will be published in late April.

Robin Barefield knows the Kodiak wilderness. For more than 30 years, she has worked as a naturalist and guide at Munsey’s Bear Camp at remote Uyak Bay on the western end of the island.

Barefield owns the camp with her husband Mike, and they live there year-round. Using the knowledge she gained from earning a master’s degree in fish and wildlife biology from the University of Hawaii, she spends her summers taking guests bear viewing, whale watching and sport fishing.

Given her long-standing familiarity with Kodiak’s outdoors, it only made sense that when she started writing mystery novels, the island’s rugged terrain and tempestuous weather would factor heavily in her stories.

From the start, Barefield’s mystery writing has been deeply rooted in her own experiences. Her first story unfolded unexpectedly as she sat in the hospital with her mother, who was battling cancer.

“I sat with her every day. It was very depressing, so I started to write down my feelings,” Barefield said. Before she realized it, her anguished journaling had veered into the realm of fiction.

“I had this character who had been sitting in the hospital with her mother and she goes out on a drive to get away from everything for a bit. She started to think about all the things she would never be able to do with her mother again,” she said.

“Then, all of a sudden, this guy goes off the road and she goes to help him, and he tells her this mysterious message, and that starts the mystery. I just laughed because it’s like, here I am sitting here and I’m supposed to be writing my feelings down, and I murdered somebody.”

That brief scene sowed the seeds for a story that Barefield would work on for the next 10 years. It eventually grew into her first novel “Big Game,” which she self-published as an e-book in 1992. The story involves a band of politicians hatching a sinister plot in a remote Alaskan hunting lodge.

Since then, her mystery novels have come more quickly. The manuscript for her second book, “Murder Over Kodiak,” caught the attention of Evan Swensen of Anchorage-based Publication Consultants.

Swensen said that when he read “Murder Over Kodiak,” he knew right away that it was a book he wanted to publish.

“Most of our Alaska-themed books were nonfiction biographies. We needed a good Alaska mystery author, and we felt that Robin would fit that bill — we haven’t been disappointed,” he said. “She's a book publisher's ideal author. Readers of Dana Stabenow, C.J. Box, Joseph Haywood, Craig Johnson and Keith McCafferty will love Robin's works.”

Publication Consultants has been publishing Barefield’s novels ever since. She followed “Murder Over Kodiak” with “The Fisherman’s Daughter” in 2017 and, most recently, “Karluk Bones” in 2019.

Although Barefield originally thought of her stories as straight mysteries with a “whodunit” angle — early influences included writers like Sue Grafton and Dick Francis — she has come to be known as a “wilderness mystery author.”

For Barefield, though, the categorization of her stories seems of secondary importance to the writing itself.

What she knows is not only Kodiak but also wildlife biology. The main character in her novels, Jane Marcus, is a fisheries biologist who works at a marine center in Kodiak. Whale necropsies and paralytic shellfish poisoning have played roles in her plots.

Getting the science right in realms beyond biology is also important. For “Karluk Bones,” whose storyline involves the discovery of human remains in the middle of Kodiak National Wildlife Refuge, Barefield did extensive research to figure out what information forensic anthropologists could glean from the study of bones, such as how long the person has been dead and how old they were at the time of death.

For many people, balancing life as a bear camp owner, naturalist and prolific mystery writer would be enough to keep them busy. But not Barefield. She also finds time to produce a true crime newsletter and podcast.

The online newsletter came first, stemming from her desire to find more readers for her books. There is a crowded market for mystery novels, so she was advised to create free content that would introduce new readers to her writing.

“If they like your writing, they’ll want to read more of it and they’ll be willing to pay for it,” Barefield said. “I thought, true crime is so popular, Alaska is so popular. True crime in Alaska has got to be a goldmine.”

For someone who mostly wrote fiction, which gives the author complete freedom of invention, she found writing true crime to be much harder than anticipated because of the research involved and the grisly content of the stories, not to mention the challenge of turning passive historical facts into engaging tales.

“I always pick an Alaska crime or a mysterious disappearance that I hear about or read about. I’m always researching,” she said, adding, “It’s tougher and it’s darker because you’re writing about real people and real murders. … A lot of them are so crazy, I don’t think anyone would believe them as a plot.”

Eventually, some of her newsletter subscribers suggested that she start a true crime podcast. At first, she resisted the idea, but then she started looking into it and realized it might be another fun outlet for her urge to tell stories. Her husband built her a small office at the bear camp with a sound studio in the corner, and the “Murder and Mystery in the Last Frontier” podcast was launched.

Her first episode was about a 1983 murder spree in McCarthy, Alaska, that was part of a convoluted, and ultimately unsuccessful, plan to steal a mail plane and blow up the Trans-Alaska Pipeline. More recently, she did a podcast on the Birdman of Alcatraz, whose original crime was killing a man in a Juneau bar.

The podcasts have helped Barefield gain more attention for her work. She’s received multiple inquiries from the producers of true crime television shows who wanted to interview her, or who were searching for information on crime in Alaska.

“The podcast has been the most successful thing I’ve done by far, but it isn’t the thing I like to do the most. I’d much rather write my novels,” Barefield said. “But it reaches so many more people. I think it might be a sad statement that not many people read anymore.”

Yet another one of Barefield’s ongoing projects is her nature blog. Many of the posts about animals and the environment are inspired by questions that guests at Munsey’s Bear Camp have asked during guided excursions. Those questions, and their answers, grew into the idea to write a book about Kodiak’s wildlife, a project that Barefield has been working on for about 10 years.

“Our spring season last year [at the bear camp] was completely canceled, and then our summer was about 50%. I got a lot more writing done. I finally said, this is getting finished,” Barefield said.

The resulting book, “Kodiak Island Wildlife: Biology and Behavior of the Wild Animals of Alaska’s Emerald Isle,” will be released by Publication Consultants at the end of April. It will feature not only Barefield’s writing, but also her husband’s photographs.

Barefield describes “Kodiak Island Wildlife” as more in-depth than a simple guidebook. It focuses on the island’s endemic mammals, as well as those introduced to the environment by humans. Ocean and avian species are also covered, including sea otters, sea lions, porpoises, whales, bald eagles, puffins and arctic terns.

“The Kodiak bear is a huge section, of course. I talk about the biology, bear and human interaction, the crazy history the bears have on this island, management,” she said. “I didn’t spend a long time, say, on caribou because there’s some on the south end of the island but it’s not a major animal that most people are going to run into here.”

Aside from “Kodiak Island Wildlife,” other Barefield projects that will hit the shelves later in the year include her fifth mystery novel, which she hopes will be out by the fall, and a true crime book based on stories she has published in her online newsletter. She has about 60 stories — enough for two books — but will start by publishing a single volume with some of the major Alaska crime stories.

In the midst of all these projects, Barefield’s primary motivation remains a simple love of writing, which includes her dedication to bringing Kodiak to life for her readers.

Hopefully I describe [Kodiak] well. The best compliments I get from people is when they say, ‘Oh I love this, it just brought back Kodiak to me when I was there or when I visited.’ That’s what I’m trying hard to do.”

Robin Barefield’s website can be found at http://robinbarefield.com, where she writes a blog about Kodiak wildlife. Her “Murder and Mystery in the Last Frontier” podcast be found at https://murder-in-the-last-frontier.blubrry.net. She is also a charter member of Author Masterminds: https://authormasterminds.com/robinbarefield. Her books can be purchased online through Publication Consultants (https://publicationconsultants.com/) and other booksellers.

U.S. Rep. Don Young called the Alaska Safety Initiative report a blueprint for Congress, as he and Alaska’s two U.S. senators advocate for resources that support aviation safety in Alaska.