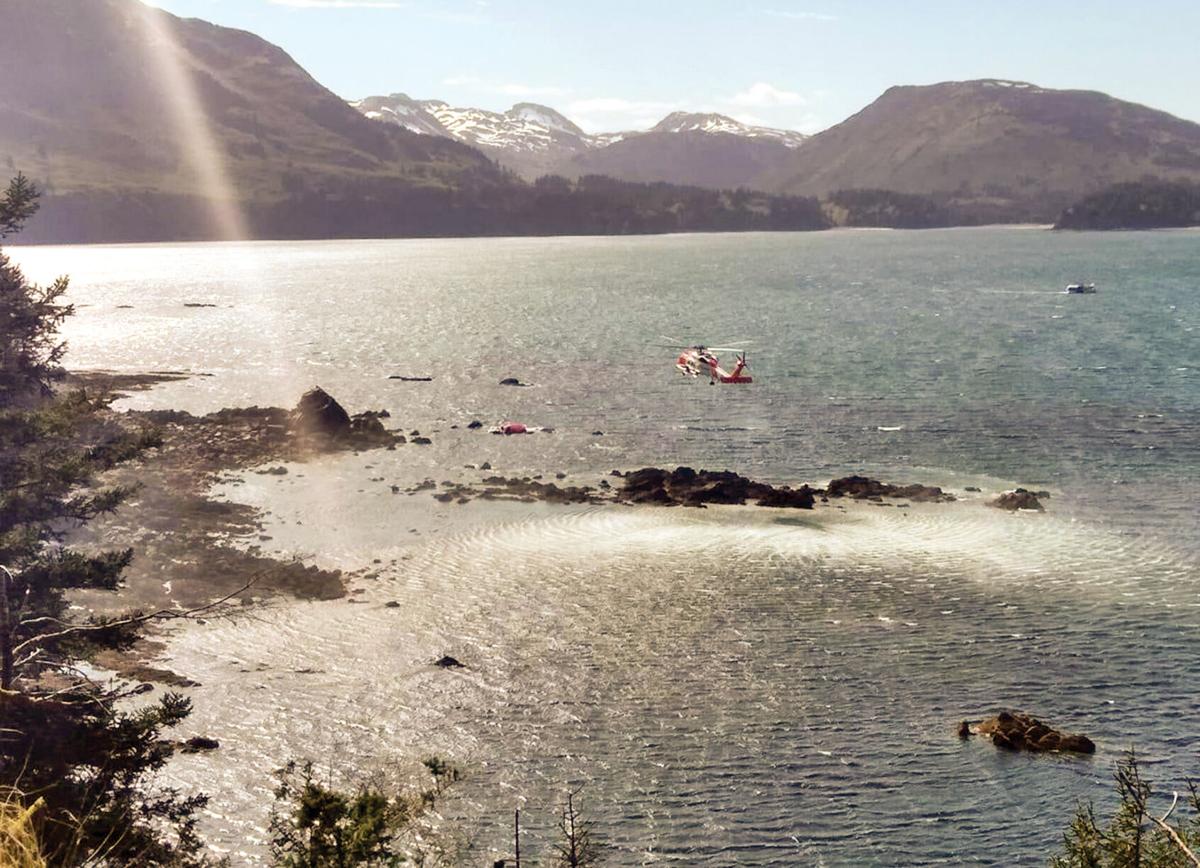 A Coast Guard MH-60 Jayhawk rescue helicopter from Air Station Kodiak flies over Monashka Bay on Saturday during the rescue of three people and two dogs who got swept into the bay. 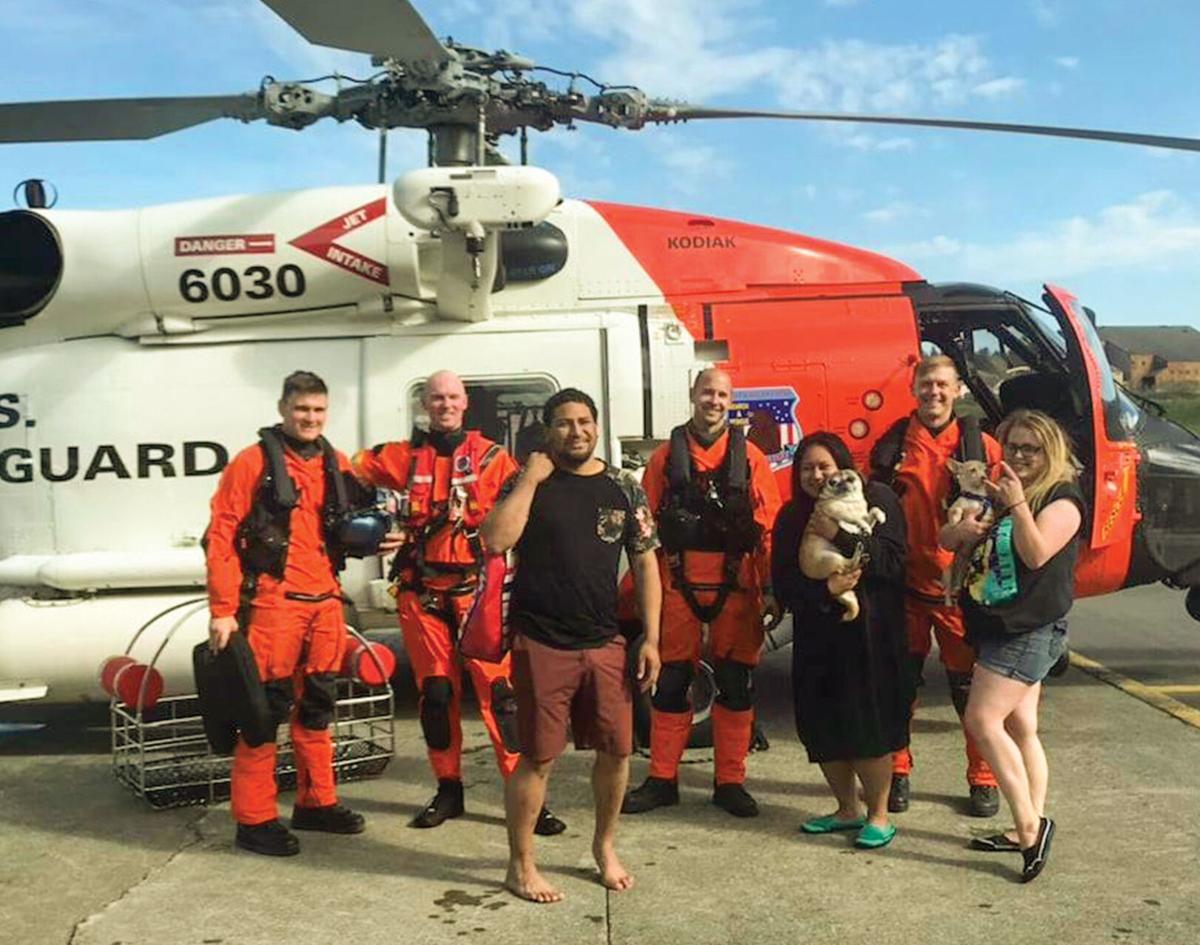 A MH-60 Jayhawk  rescue team from Air Station Kodiak stands with the group they rescued from Monashka Bay on Saturday.

A Coast Guard MH-60 Jayhawk rescue helicopter from Air Station Kodiak flies over Monashka Bay on Saturday during the rescue of three people and two dogs who got swept into the bay.

A MH-60 Jayhawk  rescue team from Air Station Kodiak stands with the group they rescued from Monashka Bay on Saturday.

“The Coast Guard learned from the Alaska State Troopers that a flamingo-shaped raft had been swept across Monashka Bay and ran aground on some rocks,” Littlejohn said Monday. “They had reportedly gotten blown out by the wind.”

Littlejohn said the Coast Guard issued an urgent marine broadcast requesting assistance from anyone closer while a Coast Guard rescue team was en route. An MH-60 Jayhawk rescue crew was dispatched from Air Station Kodiak, according to Littlejohn.

“The Alaska State Troopers had some assets in the area and when the Coast Guard helicopter arrived on scene, the raft was pressed up against the rocks,” Littlejohn said.

The troopers launched a small boat in an attempt to coordinate a rescue effort with the Coast Guard, Littlejohn said. Despite clear visibility on Saturday, the Coast Guard helicopter faced winds measuring 16 knots, or 18.4 mph.

“The Coast Guard in collaboration with the troopers collectively made the decision to hoist them,” Littlejohn said. “Getting a boat too close would not have been safe.”

Littlejohn said all three people and two dogs were taken ashore to a waiting emergency medical services unit, where they were deemed fit and in good condition.

Hollie Spence, one of the flamingo riders, said she was celebrating her 30th birthday at White Sands with her roommate Lepa Sega and her brother Nation Sega.

“My roommate had this 10-foot inflatable flamingo with a cooler, so we had snacks and drinks,” Spence said Monday. “We did it last year, but that was completely different tides. We thought we were going to be in shallow waters.”

After setting up the flamingo raft, they waded into the water and hopped on.

“Thirty seconds later, we noticed we couldn’t see the bottom of the ocean and I was trying not to freak out,” Spence said.  “At that point, we put our legs out and started paddling to get back, but currents and waves were too strong and then the wind was taking us out.”

She said they called 911, adding that dispatch at first assumed it was a joke. By then, she said other people apparently started to call when they saw the pink flamingo from shore.

The trio and the two dogs were out in the bay for 50 minutes after the call, and ended up against the barnacle-covered rocks “in the middle of the ocean.”

Spence reported that the two dogs, a pug and Chihuahua, were fine during the whole float across the ocean, but it was a different matter when they stopped on the rocks. After a while, the dogs ended up in the float, with Spence sitting on the rocks.

The Alaska State Troopers soon showed up, followed by the Coast Guard Jayhawk helicopter. A rescue swimmer swam out to instruct them on how to use the bucket. After being rescued, they were flown back to the Coast Guard base for treatment.

“The most memorable birthday I will ever have,” Spence said. “I’d like to give a huge shoutout to the Coast Guard and the Kodiak residents that cared and called and to the State Troopers. I’m just glad I can see another birthday.”

The troopers retrieved the flamingo and returned it to Sega, Spence’s roommate. “She plans to patch it up and take it out next year,” Spence said.

Alaska reported seven more deaths from Covid-19, five of them in the Fairbanks area. Those come as health care workers report harassment and threats from the public.

The autumn equinox has passed but winter weather has already arrived in Interior Alaska, with about 2 inches of snow forecast in Fairbanks today.

All mushers, volunteers and staff for the 2022 race must be vaccinated to help protect rural villages, the board of directors announced.