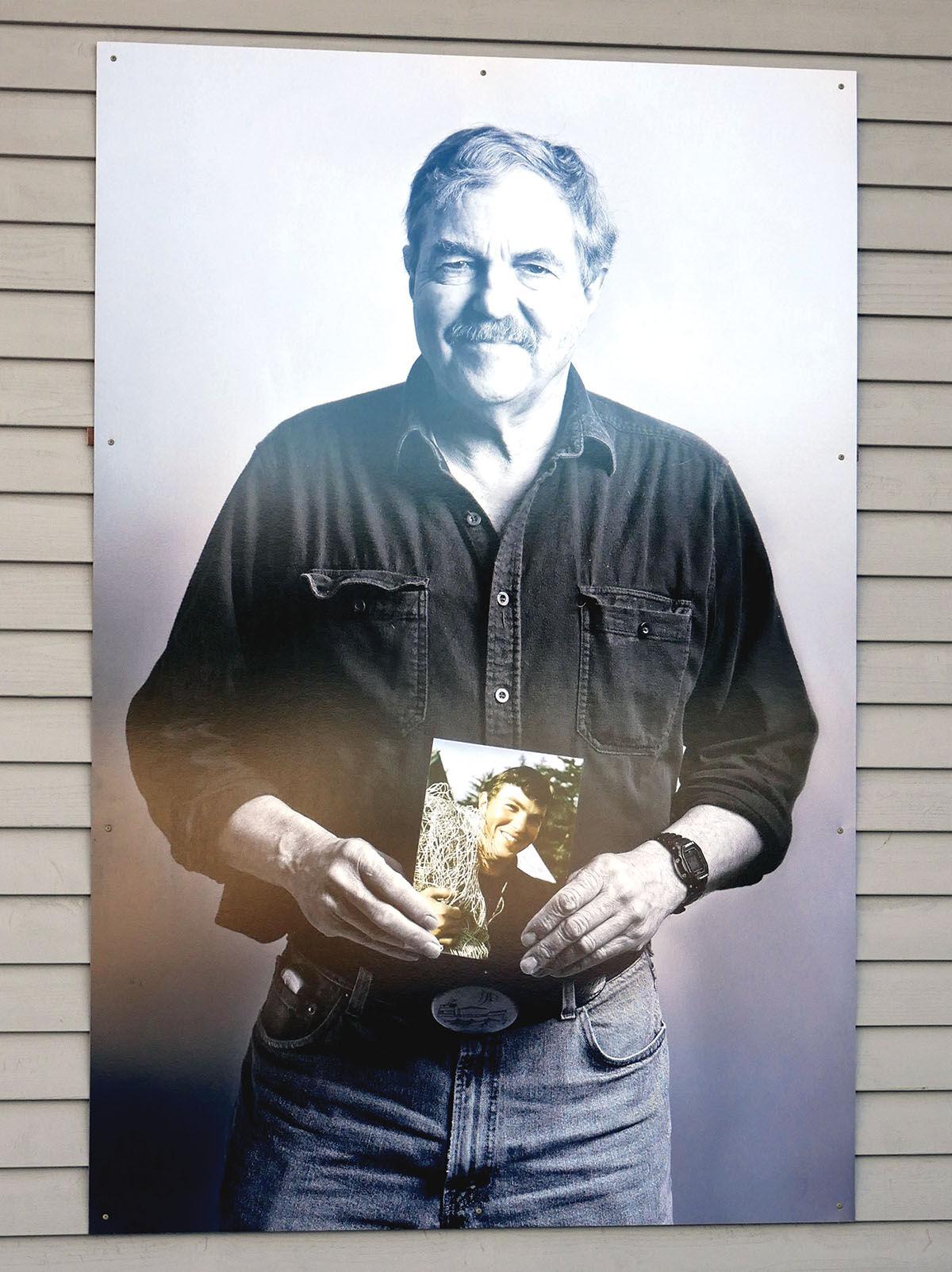 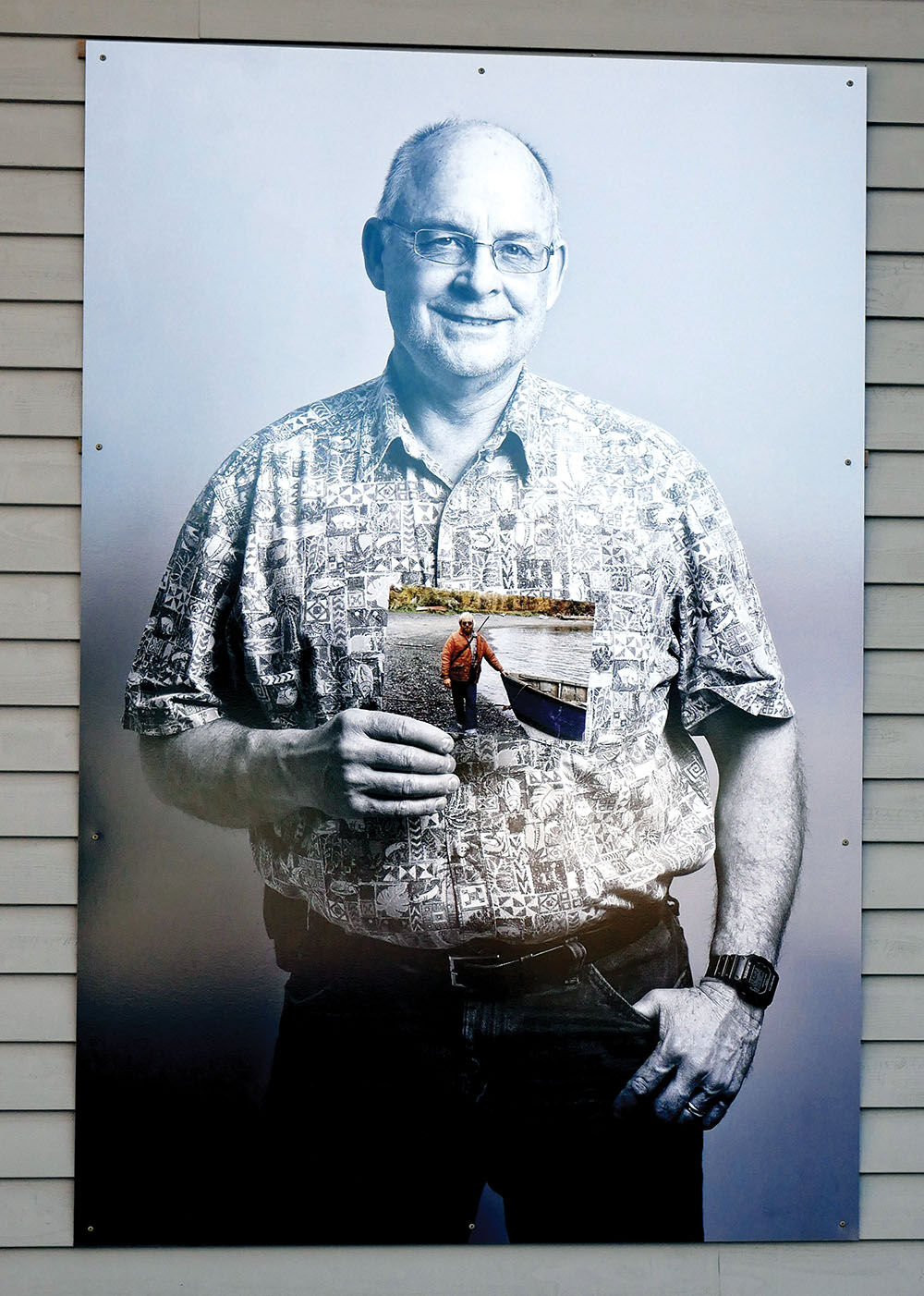 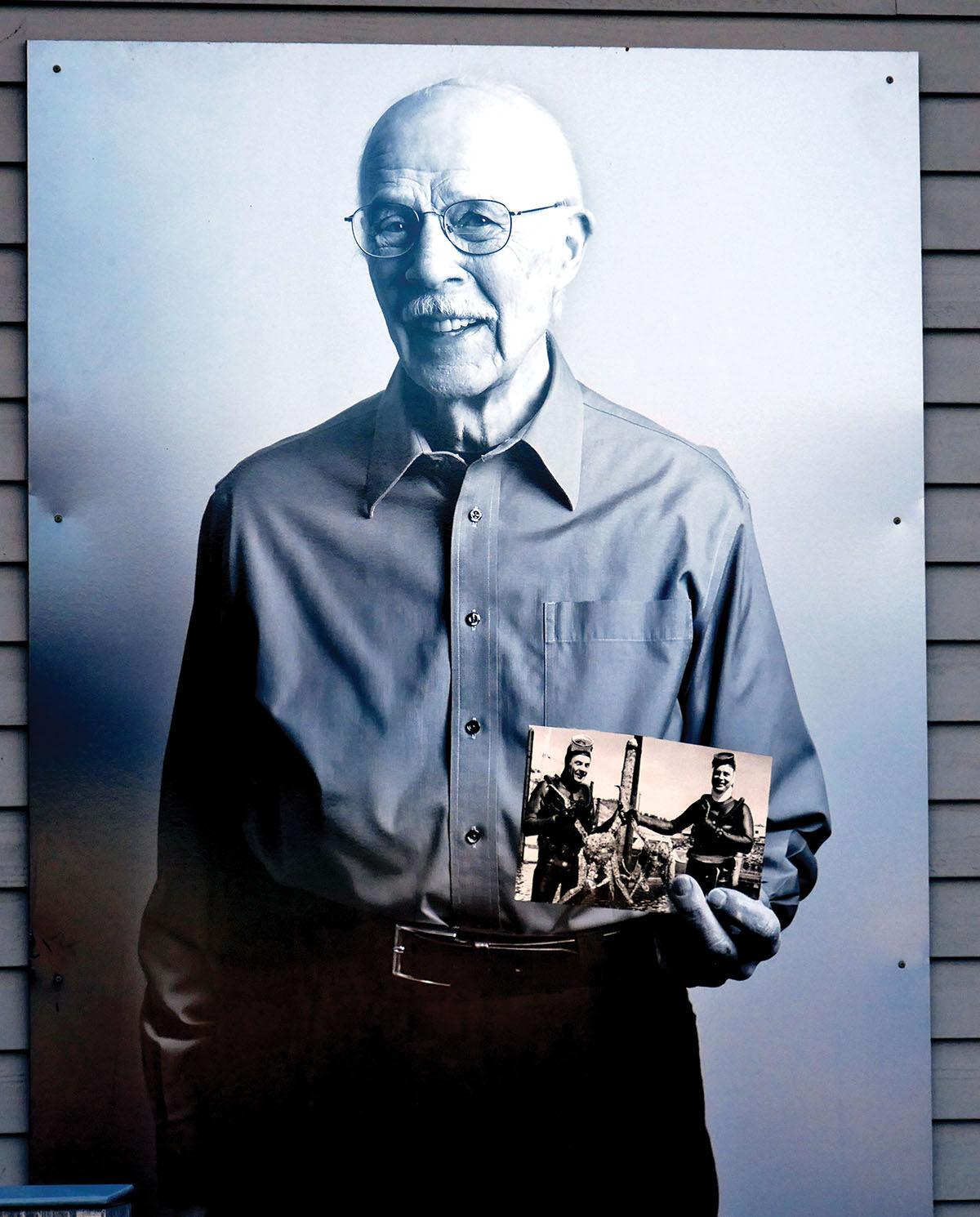 There are three new faces at the Kodiak Public Library — or rather, outside the library. Portraits of Dr. Bob Johnson, Nick Szabo and Ken Reinke are now hanging on the outer wall of the building, near it’s main entrance.

These new additions are part of the Kodiak Maritime Museum’s exhibit, When Crab Was King: The Rise and Fall of the Kodiak King Crab Fishery, 1950-1982.

Currently, there are approximately 29 portraits displayed around town and about 12 or so are slated to join them before Christmas, according to Toby Sullivan, executive director of the Maritime Museum.

The ones in the library were hung at the start of the month. Sullivan reached out to Laurie Madsen, director of the Kodiak Public Library, and she thought it would be great to have some of the pictures at the library, she said.

“I liked what I had seen around town in other places and… it was natural to me to have Dr. Bob’s portrait here,” Madsen said.

Johnson’s mother started the Kodiak Public Library, according to Madsen. When the library was built in 1968 it was named the A. Holmes Johnson Memorial Library, after Dr. Bob’s father.

Nick Szabo and Ken Reinke also have ties to the library. Szabo’s wife, Pat, is a member of the Kodiak Public Library Association, and Reinke gave a presentation at the library last year about his bicycle trip across the Lower 48.

Part of the appeal of these portraits is that they show people who are part of the Kodiak community, according to Sullivan.

“I think people see it as a really great addition to the downtown, because it’s not only aesthetically attractive, it’s part of our history,” he said. “These are all people from Kodiak, and I think people have really responded to these portraits as part of Kodiak.”

By the time all the portraits are hung up, they will have QR codes that link to the Maritime Museum’s website, where people can listen to the statements that were given in this exhibit. Each of those individuals tell stories about their lives during the king crab boom, and it wasn’t all fun and adventure.

Szabo was at sea harvesting crab in the 1960s. In his recording, he talked about coming to Kodiak in 1966, when the king crab season ran from July to May. That year the Kodiak fleet harvested 90 million pounds of crab worth 10 cents a pound, an equivalent of about 85 cents a pound today. And this was before boats had sodium lights so people were only working during the daylight hours, he said.

Johnson spoke about how the community changed. During the king crab boom, it was a “wild town” where “the bars outnumbered the churches.” After crab left, the people who stayed were the ones who liked Kodiak and saw it as more than a place to make a lot of money.

Reinke recalled working in a seafood processing plant in the late ’70s. The crabs needed to be alive when they were sent to the processors to limit the chance of crab going bad, and he was in charge of killing them. Afterward, he would separate the shells from the meat. His oral history was about his day-to-day work, which wasn’t very glamorous.

“When I was doing the butchering of crab, there was a clock behind me (where I worked),” he said. “I’d see how long I could go without looking at the clock. Sometimes you’d think you’d gone 10 minutes and you’d turn around and it’d only gone 2 minutes. It’s agonizingly boring work.”

Like Reinke, Madsen worked in a fish processing plant in the 1970s. She left California in 1973 to work here and when she first arrived she was processing shrimp, she said. In 1977, the plant she worked at began processing king crab as well.

“I think [the exhibit is] an important addition to our town,” Madsen said. “Having lived here during the king crab days, I recognize almost everybody whose pictures have been taken, and I think it’s a nice tribute to not only the king crab fishermen, but it’s a tribute to the people who lived here.”

When Crab Was King began as an oral history project. In 2007, the Maritime Museum and KMXT began recording oral histories of people who lived in Kodiak during the king crab era. At first, these sound bites aired on the radio, but later on, the museum decided to add a visual component to the exhibit, Sullivan said.

Alf Pryor was enlisted to take photographs of as many of the speakers as the museum could persuade. All of the photos were black and white, but colored photos of people during the king crab era were photoshopped onto them.

“We wanted the people to take their picture of what they look like now,” Sullivan said. “But we wanted the viewer of these pictures to understand that they also had this history from back in the day.”

In March, the museum began hanging portraits up around the town. The portraits may be able to remain outside — even in Kodiak weather — for up to five years, without being destroyed, according to Sullivan.