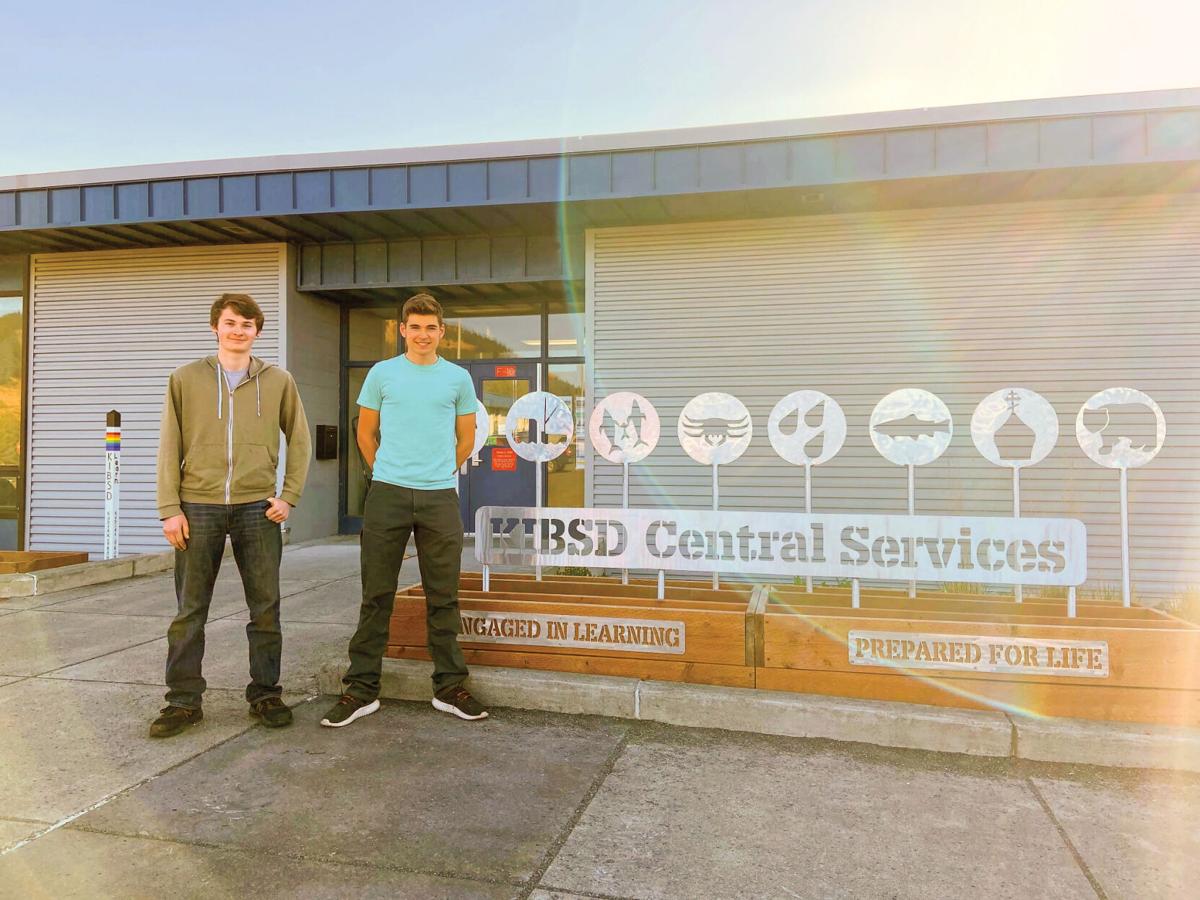 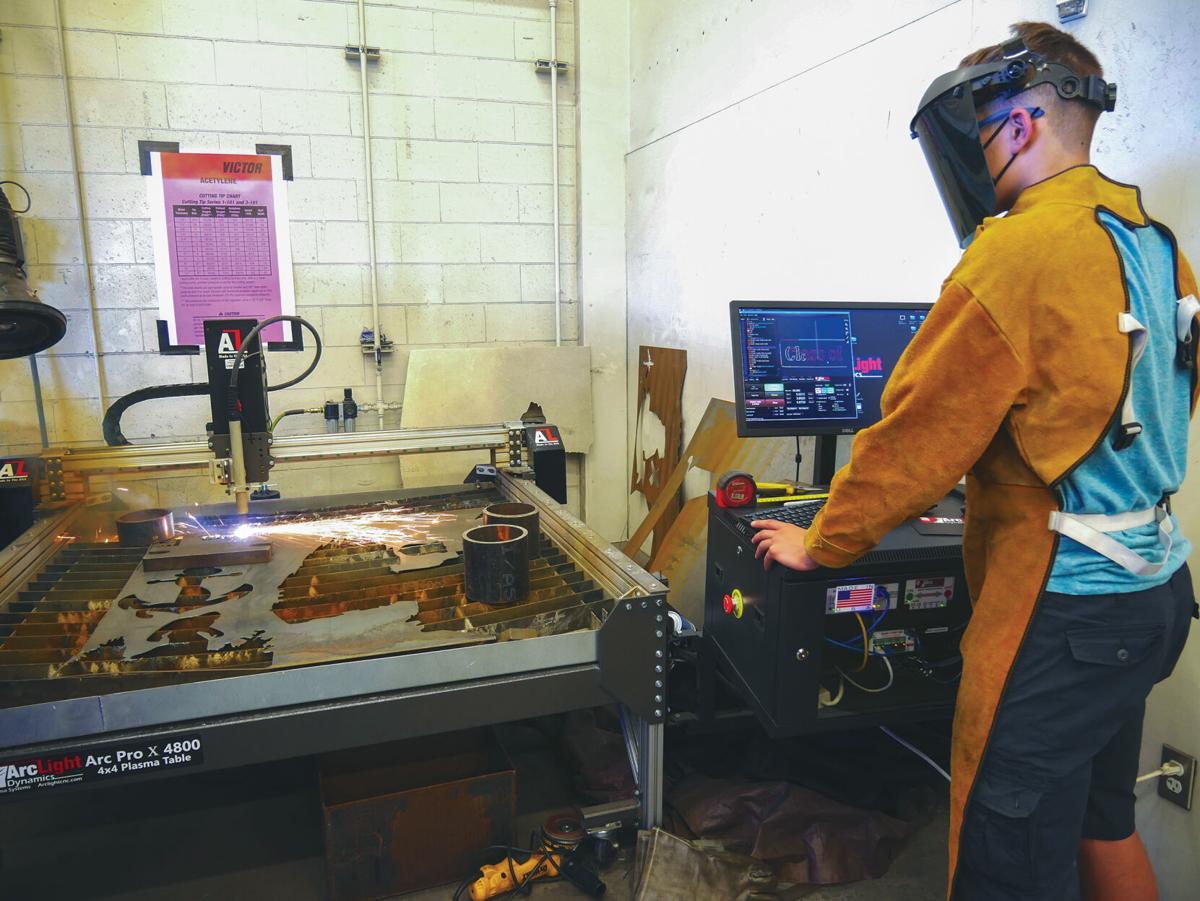 Two graduating seniors are leaving a mark on the Kodiak Island Borough School District in the form of a well-crafted metal sign now in front of the Central Services building.

“Dr. LeDoux came down and said he wanted something cool to really represent the school district and give some new life to the Central Services front area,” Horn said. “We took that to heart and made a really flamboyant sign.”

Now installed in a planter box, the display incorporates all the elements of the KIBSD logo above the building’s name, along with the district’s mantra, “Engaged in Learning, Prepared for Life.”

The sign took two months from conception to completion to fabricate. The two students used Kodiak High School’s computer numerical control welding machine to cut and join the parts together. Horn and Roberts used computer-aided design software and then utilized the CNC machine to bring it from concept into reality.

“Welding is where you just put metal together,” Cavan said. “With a CNC, you have to know the software. It’s a part of welding, but it brings in a lot of new technology.”

Designs are created in a type of CAD software and exported into a drawing exchange format (DXF) in order to be compatible with a CNC machine.

“A customer in the community could make something at home and give it to me in a DXF format,” Cavan said.

The CNC machine uses computer software to cut the design using a plasma cutter based on the data programmed into the machine’s system.

“Students bring the file to the computer, at which point they use two pieces of software,” Cavan said. SheetCam allows the CNC machine to create paths for the torch. The second bit of software translates the paths and cuts the design.

“Just being able to take ideas from your head to an actual piece you can hold and putting it out for everyone to see is a really cool experience,” Roberts said.

According to Cavan, the process to make the sign could take less time.

“I have these two only four hours a week,” Cavan said. “If I had a professional shop where they had eight hours, it would have taken only a few days to make a sign.”

The CNC machine greatly streamlines the process needed to create designs compared to more traditional plasma welding techniques. It also allows students to make parts that would otherwise need to be ordered from off island.

Roberts said “it would have been almost impossible in the time we had if we did not have the CNC machine.”

“Being able to operate it smoothly was great,” he said. The fabrication process alone took a month complete based on a four-hour week.

Horn has been a welding student since the previous school year, while Roberts began at the start of his senior year.

Both said they enjoyed the course and the skills it teaches. Horn said plans were lined up to get welding certificates this school year, as the certified welding inspector was unable to visit due the pandemic.

Roberts said he earned an academic excellence award for welding.

Both intend to continue their learning in welding in some way.

Horn said the current COVID-19 class limits at Kodiak College are a challenge to take classes after high school, “but I will definitely take it on the side.”

Horn acknowledged the welding classes taught at both Kodiak High School and Kodiak College allow people to explore new career opportunities, especially for a trade needed on the island.

“This island is in need of a lot of good welders and craftsmanship people,” Horn said, “and this class really helps kids get the opportunity to see if they can embrace it and start a professional career.”

Having a permanent symbol in front of the district’s administrative offices provides further testimony to that, they added.

“I think it really shows with dedication and perseverance that you can really show off your skills in Kodiak,” Roberts said.

Horn added can also serve as an inspiration to younger welding students and make them think “that students two years ahead of me made this, so I can make it too.”

The names of the two — a man and woman — have not been released.

And in the middle of it all are disagreements on the amount of this year’s Permanent Fund dividend.

The Upgraded Early Warning Radar is strategically located here to provide the country with the ability to detect and track ballistic missiles and interceptors at a range of up to 3,000 miles as well as monitoring objects in space.