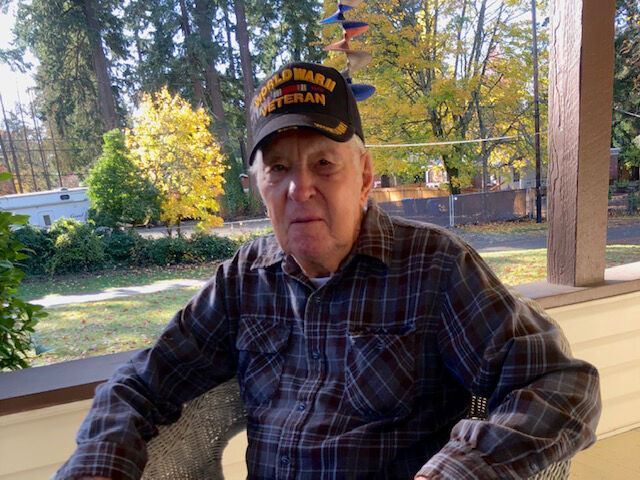 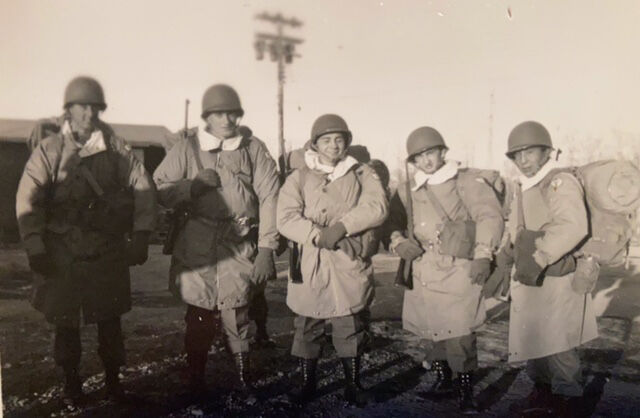 Soldiers from Kodiak at Fort Richardson in Anchorage during World War II.

Soldiers from Kodiak at Fort Richardson in Anchorage during World War II.

When Kodiak resident Marty Owen was a youngster, he’d stand next to his dad as they brushed their teeth every morning. One day, Marty saw his dad take his bridge with four artificial teeth out of his mouth to clean it.

“He’d admonish me and say, ‘Be sure to brush really well, or you, too, will lose some teeth,’” Marty recalls.

Decades later, Marty got the whole story about the missing teeth during a recent chat with his 97-year-old father, Bud Owen. Marty was visiting his father in Washington state, and after a trip to the dentist Marty asked: “So Dad, what happened to your four teeth?”

“Oh, I just jumped into a foxhole and hit my head.”

“Did you get a Purple Heart?”

It turns out that Bud, serving in the Army during World War II, had been diving into a foxhole under enemy fire while on Attu in the Aleutians.

Bud had joined the Army a couple years after he had moved with his family from Ketchikan to Kodiak during the Great Depression. He was 16 years old when he arrived — old enough to recognize that Kodiak was on high alert.

“There was quite a lot of construction and troop activity in Kodiak,” he said. “We thought Japan was going to attack us.”

FROM KODIAK TO ATTU

The military was building a large naval base at Womens Bay and had installed coastal artillery at Miller Point, Long Island, Cape Chiniak and Fort Greely near the Navy base.

When the Japanese bombed Dutch Harbor on June 3, 1942, and occupied Kiska and Attu a few days later, Kodiak braced for an attack.

Not long after, Bud and 17 other young men from Kodiak enlisted in the Army and were sent to Anchorage for an abbreviated basic training at Fort Richardson.

“I had learned how to shoot a rifle long before that — and it wasn’t long after training that we boarded a troop ship,” Bud said. “I think there were several hundred of us on that one ship, and they didn’t tell us where we were going.”

Many soldiers arriving from the Lower 48 were woefully unprepared for the harsh Aleutian climate, Bud recalls.

Attu is the last island in the 1,100-mile-long Aleutian chain. The nearly 100 volcanic islands align in an arch-like boundary line between the Pacific Ocean and the Bering Sea.

Extremely remote, Attu is roughly a thousand miles closer to Tokyo than it is to San Francisco. It sits wide open to williwaws, the hurricane-force winds that seemingly come up out of nowhere and scream across the open ocean, often at 100 mph for a few hours or even several days at a time. Add to that the nearly constant heavy fog that keeps the air moist and temperatures in the mid-30s for much of the year. Trees and shrubs are not indigenous to the islands, and settlements on the remote Aleutians are sparse.

But the village of Attu was an exception. The Unangan, or Attuans, settled on the island at least 5,000 years ago. Attu remained an active community, thriving on the natural resources of the region, until the war started. Japan invaded the village, took the 41 residents as prisoners of war, and held them in captivity in Japan.

Confined in bleak conditions, almost half of the Attuans died from malnutrition and starvation. Survivors were not allowed to return after the war to the village because it had been destroyed; instead, they were relocated to the village of Atka.

Harsh weather played a major role in the battle to recapture Attu. “There was a lot of fog,” Bud said. “Williwaws blowing constantly. And the temperature was a problem … Some of the soldiers weren’t prepared for it.

“Those who came up from places like Tennessee … didn’t have cold-weather gear. We Alaskans formed an outfit right there in Anchorage and were issued cold-weather equipment. But many from the Lower 48 arrived with temperate-style clothing and shoes.”

The troop ship Bud took from Anchorage to Attu carried about 600 soldiers. When it stopped in Shemya for fuel, he had a brief visit with his brother, who was stationed there. When they reached Attu, rough seas breaking on the beach greeted them.

“There were always quite a lot of waves on Attu,” Bud said, “which made it extremely difficult to land. We went ashore in landing crafts … about 95-feet long and 25-feet wide that got us pretty close to the beach. The front door dropped and we charged out.”

Once on the beach, soldiers quickly came to appreciate Attu’s rugged terrain. Deep and narrow snow-filled valleys and steep 3,000-foot mountains left very little flat ground on the 20- by 40-mile island for the Americans to set up camp. Instead, they slogged through soft snow and boggy tundra with 100-pound packs on their backs and started their ascent up steep cliff faces to find cover from the Japanese soldiers who were already in secure positions.

The Japanese clearly held the advantage, dug into caves and along mountain ridges high above the American newcomers. And, according to Adm. James S. Russell, commander of the Navy Patrol Squadron 42, the Japanese soldiers probably came well prepared for the Aleutian’s hostile environment since Japan had a long history of commercial fishing in the region.

“…Japanese fish boats for a long time had been depleting areas of Bristol Bay of fish by their thorough methods. And these, along with the seal and sea otter harvesting in the southern Bering Sea, must have amassed for Japan very considerable meteorological and geographic information,” Russell wrote in “Alaska at War, 1941-1945: The Forgotten War Remembered.”

LUCKY COMES IN ALL SHAPES, SIZES

Bud had heard that the battle was winding down when his company landed on Attu. But the fighting was far from over. Hundreds of Japanese soldiers were still dug into caves and ridges at higher elevations where fog made it difficult for the Americans to find them. The Japanese troops’ white over-jackets also did a good job of camouflaging them against the snow-covered, mountainous terrain.

The Americans pressed on to drive the Japanese off the ridges and out of caves.

“Eventually we went in with flame-throwers,” Bud said. “I had one of the 72-pound devices strapped on my back.”

He recalls firing flames into a tunnel several times, when, unexpectedly, several Japanese soldiers ran out firing their rifles.

“We all ran for cover,” he said, and remembers thinking at the time, “I’ve got to get my head down.”

And then he was down.

“I jumped into a foxhole,” Bud recalls. “And with that heavy flamethrower on my back, I guess I hit the far side pretty hard! I hit my head and broke my jaw, knocked out four teeth and was bleeding so [badly] that when the Japanese overran my position they must have thought I had been shot in the head and was dead. So they left me.”

“Later, when the American GIs came back for their dead, they found me unconscious and moved me back to the sick bay aboard the ship. When I woke up, my mouth was wired shut. … The doc who patched me up said, ‘You’ll survive.’ And I did.”

U.S. military planners initially estimated that it would take three days to recapture Attu. Instead, American and Japanese soldiers fought for 19 days before the Japanese finally were defeated at high cost to both sides.

“The men were to fight a tough, resolute enemy under conditions of wretched weather, unforgiving terrain, and sometimes nonexistent supplies and communications,” wrote Fern Chandonet, editor of “Alaska at War, 1941-1945: The Forgotten War Remembered.”

In the end, the Battle of Attu cost 549 American lives; another 1,148 were wounded; 1,200 suffered severe cold injuries; 614 suffered disease (including exposure); and 318 suffered other casualties, including self-inflicted wounds, psychiatric breakdowns, drownings and accidents, according to data reported by Brian Garfield, author of “The Thousand Mile War”.

American burial parties counted 2,351 Japanese bodies. Among the dead were 500 Japanese soldiers who committed suicide with grenades rather than surrender, Garfield wrote.

“It was critical to stop them,” Bud said. “And, well, we did it. They never made it to Kodiak.”

Bud fully recovered from his injuries. After Attu, the Army shipped him and other

soldiers from Alaska to Mississippi for advanced infantry training, then to Long Beach, California, where he boarded another troop ship with about 3,000 soldiers headed to Karachi, in Pakistan. Bud then traveled by train across India and was eventually assigned to a military police unit escorting convoys carrying supplies and provisions needed by the allies in China.

“We were deep in the jungles of Burma when the war ended and were told to get to Calcutta any way we could,” Bud said. “I remember walking, riding camels, elephants, and trains. We even stole a truck at one point.”

Bud was adept at math and soon was put in charge of flight manifests. Eventually, he booked himself on a flight home, but shortly before departure he gave up his seat to another Alaskan so he could get home sooner to be with his young family. Sadly, that aircraft disappeared en route.

“I was given $800 and told to go home. I thought I was rich,” he said. “I’d been completely around the world with stops in Attu, Hawaii, Australia and India and Burma. It was quite the adventure for a kid from a sleepy little fishing village on Kodiak Island, Alaska.”

After the war Bud returned to Kodiak.

“I did a little fishing — purse seine and gillnet — before moving to Washington state and marrying Virginia, my childhood sweetheart,” Bud said.

He worked as an accountant and together they raised five children — Marty, JoAnn,

Clifford, Neal and Tina. Bud still lives in the family home where the Owens’ raised Marty and his four siblings.

Omicron BA.2: What we know, what what to expect

In Alaska, Covid-19 cases are leveling off after reaching record highs during the Omicron surge, but a new and even more highly contagious variant is on the rise. The BA.2 variant of Omicron now accounts for over 50% of new cases nationally, and just under half of cases in Alaska, state epid…

North Pole Rep. Mike Prax was one of eight lawmakers diagnosed with Covid-19 Wednesday in an outbreak that has swept through the Alaska House.