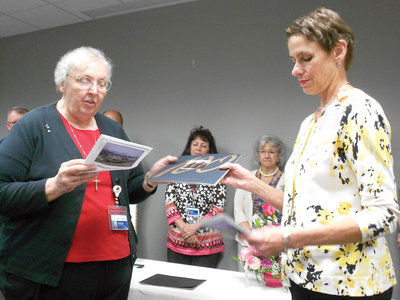 Sister Barbara Schamber, one of the Sisters of Providence, missions PKIMC’s new administrator and CEO Barbara Bigelow. Missioning is a 159-year-old tradition in Providence. 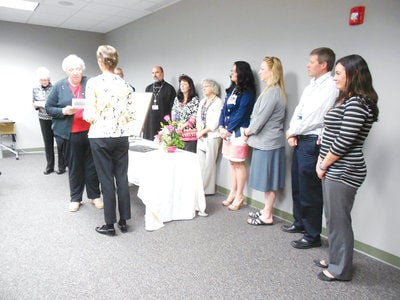 Sister Barbara Schamber, one of the Sisters of Providence, missions PKIMC’s new administrator and CEO Barbara Bigelow. Missioning is a 159-year-old tradition in Providence.

In the tradition of Providence, Barbara Bigelow, the new administrator and CEO for Providence Kodiak Island Medical Center, was officially welcomed to Kodiak via what’s known as a “missioning ceremony.”

This ceremony has been a tradition in Providence for nearly as long as the organization has been in this country. The Sisters of Providence came to Vancouver, Washington, from Montreal in 1856, and began establishing schools, orphanages and hospitals. As Providence ministries began to grow and expand in the Pacific Northwest, the Sisters realized that they needed more leadership to run these facilities and keep the mission alive. The missioning ceremony was developed as a way to symbolize the new leadership accepting their responsibility in carrying out the mission and core values of Providence.

During the ceremony, new leadership are reminded they are to be faithful to the Providence Mission and to animate the Core Values through their actions and decisions. Ultimately, they are reminded that they are to be a leader to people who are providing loving, compassionate service to all that enter the doors of Providence with a special consideration to the poor and vulnerable.

Bigelow’s missioning ceremony was presided over by Monica Anderson, chief mission integration officer for Providence Health and Services Alaska. Sister Barbara Schamber, one of the Sisters of Providence, delivered the blessing and missioning ritual. In the blessing, Sister Barbara blessed Bigelow’s head, eyes, lips, heart and hands — all which are parts of the leader that play a role in living out the mission.

Multiple options are under consideration to shore up student transportation at the school district, including a potential partnership with the Metropolitan Area Commuter System.