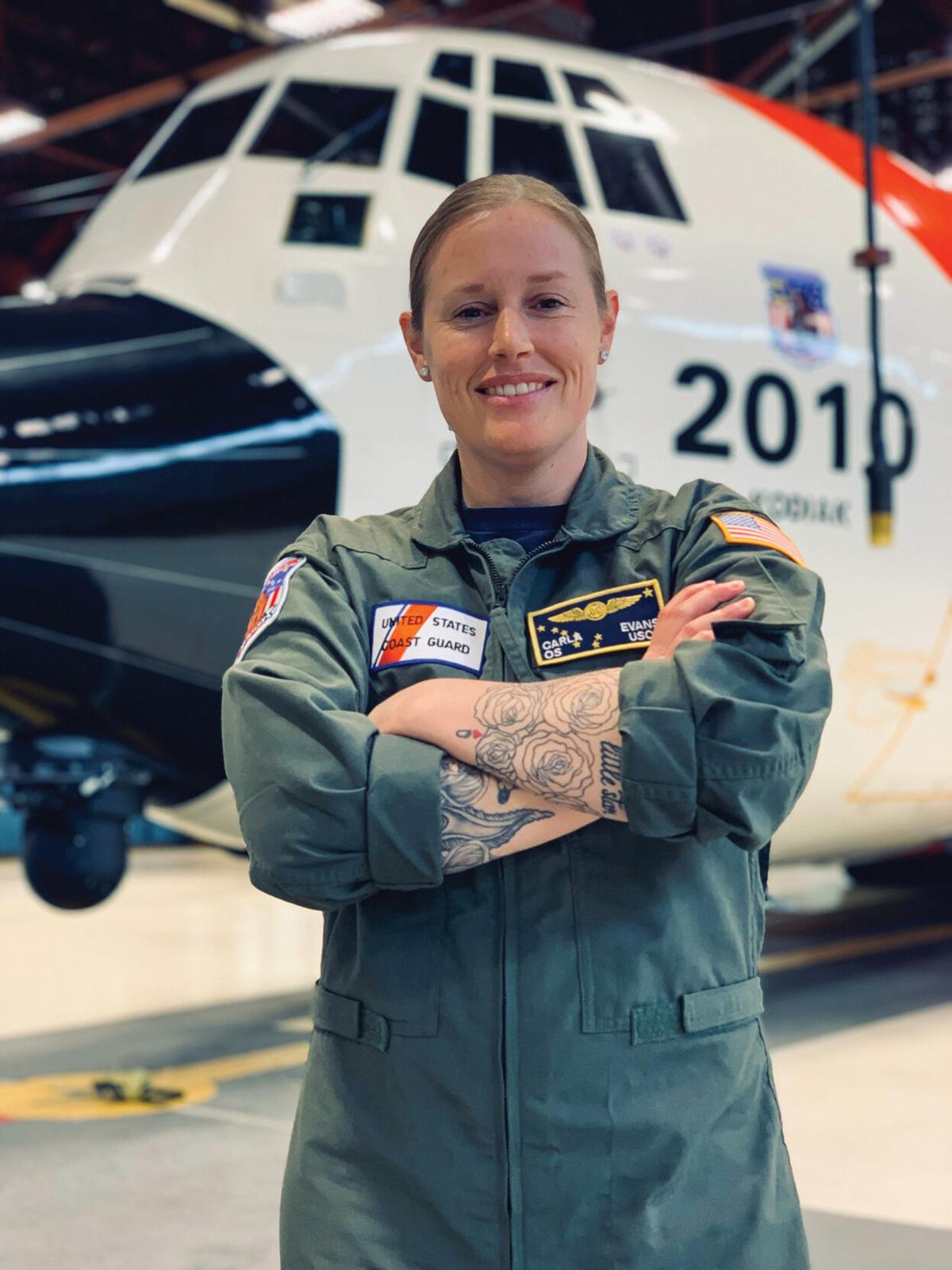 Petty Officer 2nd Class Carla Evans, an operations specialist stationed in Kodiak, is the founder of the Coast Guard Spectrum Norther Lights Chapter, an Alaska affiliate of the Department of Homeland Security's Spectrum employee association representing the LGBTQIAP+ community, as well as their friends, family, allies and advocates. 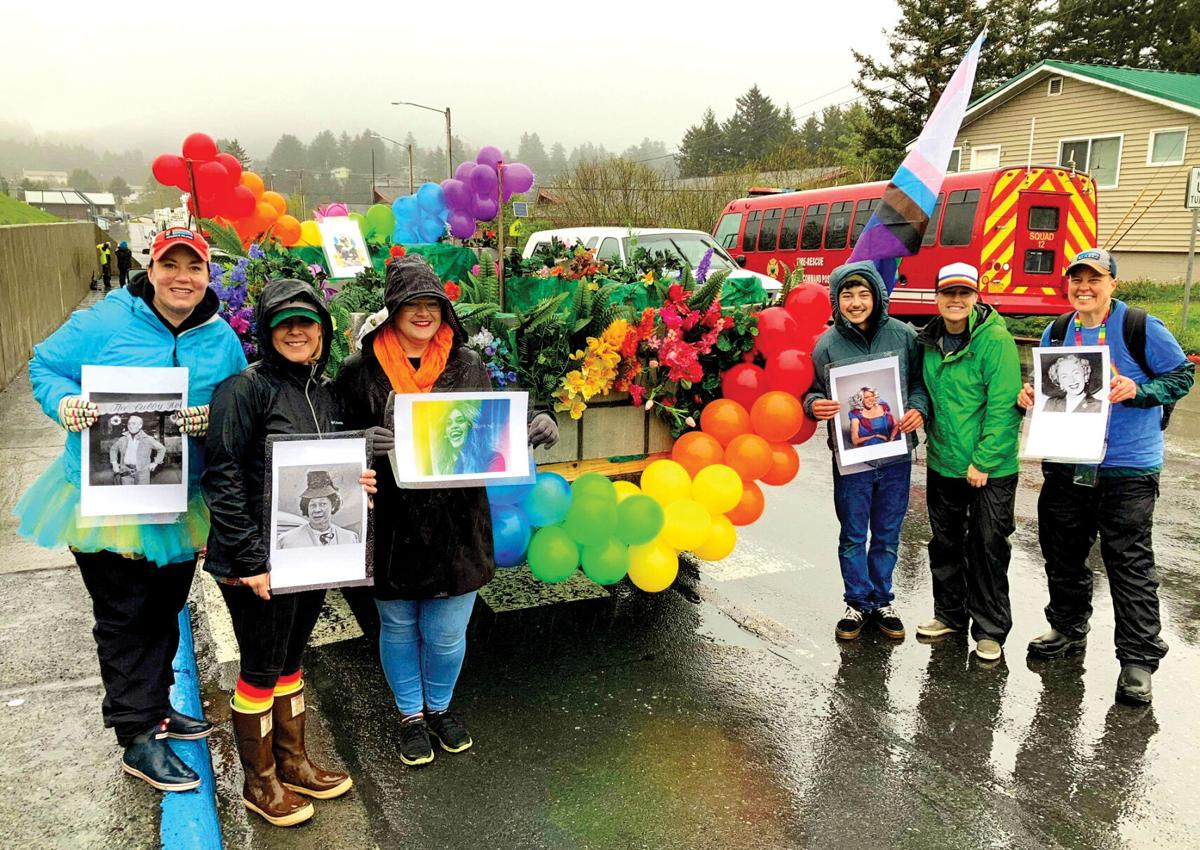 Kodiak Coast Guard Spectrum Northern Lights members, Kodiak School System Gender and Sexuality Alliance members and others pose next to their Pride-themed float during the Kodiak Crab Festival parade on May 29.

Petty Officer 2nd Class Carla Evans, an operations specialist stationed in Kodiak, is the founder of the Coast Guard Spectrum Norther Lights Chapter, an Alaska affiliate of the Department of Homeland Security's Spectrum employee association representing the LGBTQIAP+ community, as well as their friends, family, allies and advocates.

Kodiak Coast Guard Spectrum Northern Lights members, Kodiak School System Gender and Sexuality Alliance members and others pose next to their Pride-themed float during the Kodiak Crab Festival parade on May 29.

A charge to recognize Coast Guard service members who are part of the LGBTQIAP+ community led to the establishment of the Northern Lights Chapter of Coast Guard Spectrum, an affinity group that held its inaugural event at Joint Base Elmendorf-Richardson in Anchorage in April.

The chapter is an affiliate of the Department of Homeland Security's Spectrum employee association. LGBTQIAP+ is the acronym for Lesbian, Gay, Bisexual, Transgender, Queer and/or Questioning, Intersex, Asexual and/or Ally, Pansexual and others.

Since then, it has blossomed, according to the U.S. Coast Guard Alaska, with the charge being led by a Coast Guard operations specialist stationed at Air Station Kodiak and the support of Coast Guard Anchorage Sector’s commander, Capt. Leanne Lusk.

The Coast Guard’s latest Anti-Discrimination and Anti-Harassment Policy update on June 12, 2020, protects members from discrimination and harassment based on their gender identity and sexual orientation. But policy does not immediately translate into a shift in attitude or workplace climate — both of those are dictated by each member of the Coast Guard workforce, every day.

“More so now than ever, the LGBTQIAP+ community needs and deserves visibility,” Evans said. “We now have the physical presence as a recognized affinity group to influence change, and truly provide the emotional and physical support and advocacy necessary for changing hearts and minds within our organization.”

Evans understands that those changes won't come without gaining community support — especially in a place like Kodiak, where the Coast Guard is embedded in the island's culture. There, she's been working closely with Monica Claridge, a school teacher at East Elementary, along with others, to raise inclusive support for the LGBTQIAP+ community.

"Being able to link up with Monica and a handful of other community leaders in town has been integral in establishing our Spectrum Northern Lights Chapter as an organization that not only serves our Coast Guard community, but also the Kodiak Island Borough as well," Evans said.

Kodiak Coast Guard Spectrum Northern Lights members, Kodiak School System Gender and Sexuality Alliance members, and others teamed up for a Pride rock painting event, and built a Pride-themed float for the 2021 Kodiak Crab Festival parade on May 29, earning first place in the float competition.

Thirty people marched alongside the float with Pride flags. The alliance, tentatively known as Kodiak Pride, has organized a Pride Run 5K/1-mile walk scheduled in Kodiak on June 26, which will include a post-race celebration complete with food trucks.

"We've been working for visibility, community and inclusivity," said Claridge. "We've received feedback from community members that our efforts make Kodiak feel more like home. It's been really neat to see how much the community has embraced us."

Carrying that motivation forward, Evans, Claridge and others are working to establish a mentorship group in Kodiak to encourage further education, support and an overall sense of belonging for the LGBTQIAP+ young people and allies who live here.

"We're planning events intended to be simple and fun," Evans said. "We're looking at easy hikes, coffee meet and greets, and game nights to create positive spaces where our youth can come as their authentic selves and feel comfortable to exist without judgement. In creating this mentorship program, I hope we can create something that lasts long after we have departed our respective Coast Guard assignments here in Alaska."

Smith, one of the cosponsors of the Northern Lights chapter, noted the group doesn’t focus on any particular group.

“We are very intentional in ensuring we operate within an intersectional and anti-racist framework. We know from lived experience that the LGBTQIAP+ community is not just white, cisgender or male,” Smith said. “As such, we make the conscious choice to advocate for all marginalized communities whether that is members who are living with HIV, transgender members, Black gay members, etc.”

Smith added that a certain level of resistance is expected when being the vanguard of change.

“This has certainly been the case for us and the changes for justice, equity, diversity and inclusion that we have been trying to make,” Smith said.

“Despite the pushback we have received, we continue to create intentional, psychologically safe spaces that allow for all members, regardless of identity, to feel they are able to show up as their authentic selves.”

McKenzie said the most crucial components of creating a culture of acceptance and equality in the Coast Guard are open-minded members who seek education.

"As a lesbian and Spectrum member, I feel a responsibility to advocate for our community," she said. "Part of that means continuously learning, so that I can share that knowledge with others who don’t identify as LGBTQIAP+.”

A good place to start, she said, is learning what all those acronym letters mean.

“Even that acronym presents an opportunity for continuous learning and growth because it’s constantly evolving,” McKenzie said. “I think education is critical to developing empathy and reaching acceptance, so I’m trying to do my part by bridging the gap. Being a lesbian does not make me an expert on all things related to sexual orientation or gender identity, but it does give me perspective.”

McKenzie is one of many LGBTQIAP+ Coast Guard members who served before the repeal of the “Don’t Ask, Don’t Tell” policy in 2011.

During a heartfelt speech at the April 16 ribbon-cutting ceremony in Anchorage, Lusk, the Anchorage sector commander, reminded virtual attendees from across the country, as well as those present in the room, that despite geographic isolation, the one thing uniting all Coast Guard members is an emphasis on people and community.

“Our service has come a long way since the time I first took the oath, but we still have a long way to go,” said Lusk.

“While my LGBTQIAP+ family, friends and colleagues legally no longer have to hide their genuine selves, we still find areas in our service where individuals are unwilling to open their minds and hearts, blatantly express hurtful statements and bigoted remarks, or subtly exhibit micro-aggressions. The lack of empathy and compassion for our shipmates is dehumanizing, run contrary to our core values of honor, respect and devotion to duty, and in many cases are illegal.”