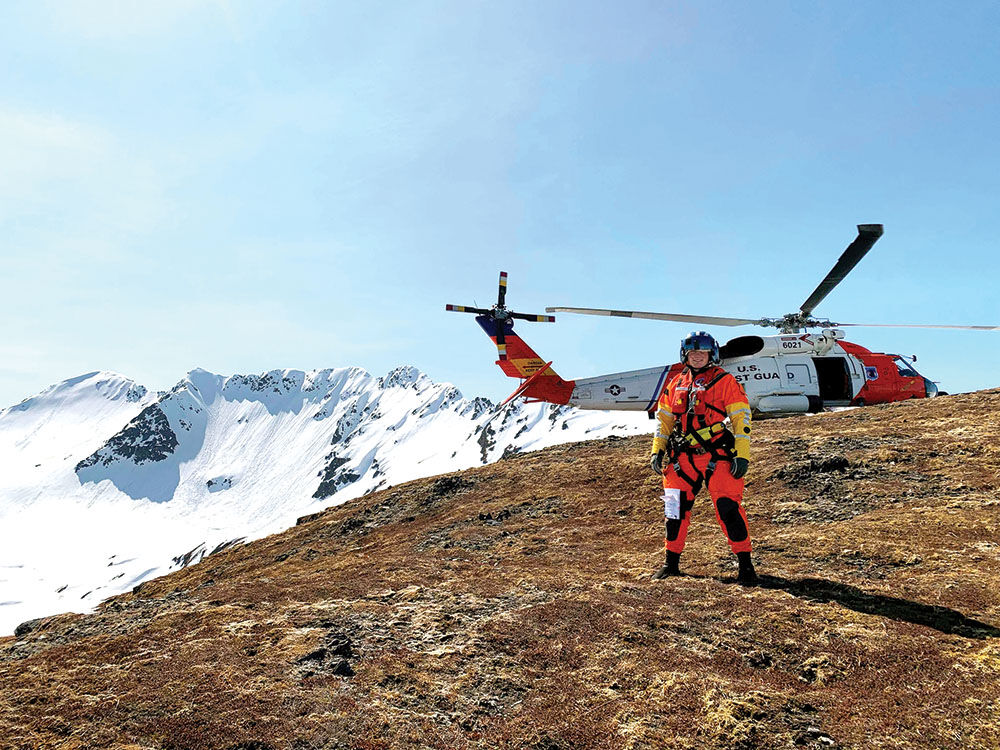 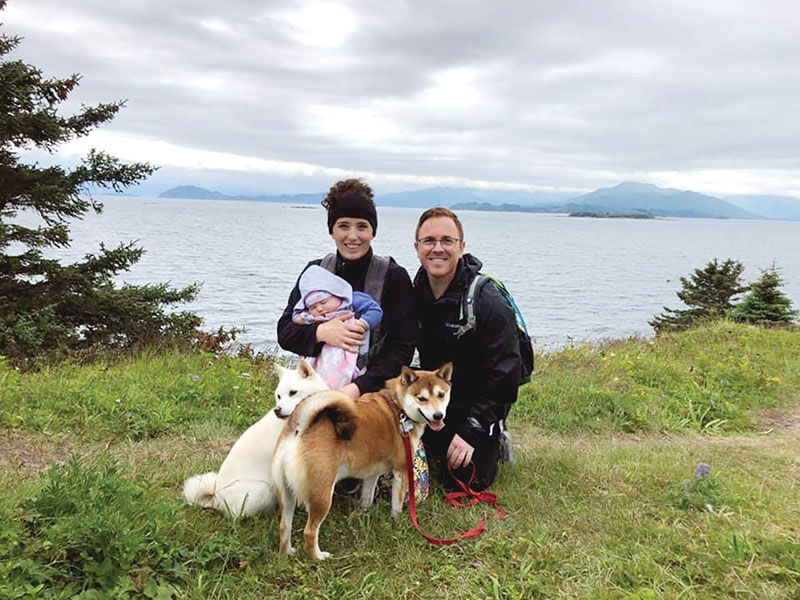 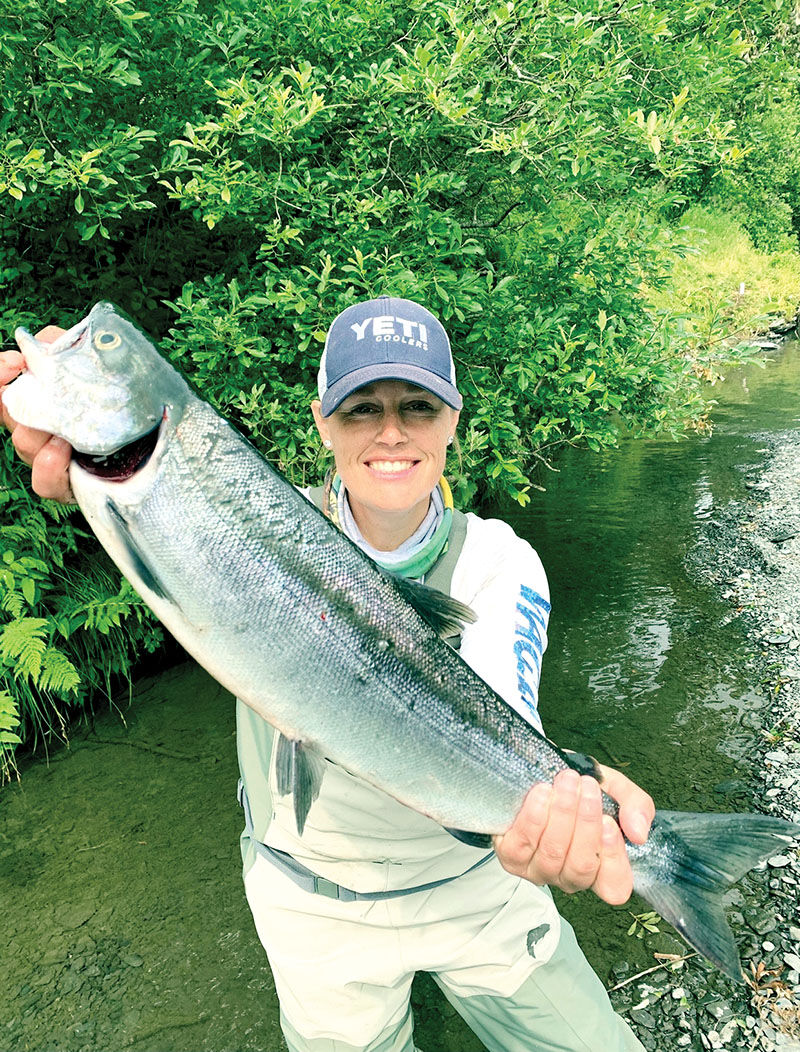 The Coast Guard has created an unmistakable impact on Alaska’s landscape over the decades, and it’s also left an unforgettable impression on those stationed in the state.

The series provides topical formats, ranging from small, supportive communities to everyone having a critical role and pitching in during important scenarios.

Wadlow said the campaign has been well received.

“Not only have we been able to meet our goals for engaging with our friends and neighbors throughout Alaska, but we’ve been able to re-connect with active duty, reserve and retired members of the Coast Guard along with their families who’ve shared their stories and memories about being stationed in Alaska,” Wadlow said.

Four of the Coast Guard families whose stories are being shared are stationed in Kodiak.

Petty Officer 3rd Class Kimble Petersen, an aviation survival technician stationed at Air Station Kodiak, reflected on his interpretation of the Alaska way, pitching in whenever needed and filling a critical role.

“Since we cover such a large area of responsibility in Alaska and because people in Alaska are very adventurous, they often get stuck in some crazy situations,” Petersen said. “So, when something goes wrong, it REALLY goes wrong.”

When his unit arrives on scene for a rescue, it’s either a serious or “life or death” situation.

“If we weren’t there, the outcome would be very different for those individuals,” Kimble said. “It makes all the hard work worth it knowing we made a difference.”

Petersen joined the Coast Guard in 2019 after a year of college, and was assigned to US Air Station Kodiak following rescue swimmer training school, or A-school.

“I decided to look for a career that would let me keep swimming and keep my physical fitness up as part of my job,” Petersen said. “So, when I saw rescue swimmer it seemed perfect. I could use my swimming ability to save people.”

Petersen selected Kodiak as his duty station after completing his training and hearing good things about it.

“I just heard it was a big station where I could get lots of experience and beautiful flying, and so far that’s all been true,” he said. He said he has come to see Kodiak as a unique place with many places to explore.

“You can hike to the tops of mountains, have a campfire at the beach, go hunting and fishing,” Petersen said. “If you’re an outdoorsy person, Kodiak is the perfect playground to do all of that.”

Music producer Brody Blackburn and his wife, Petty Officer 1st Class Ali Blackburn, have lived in Kodiak since 2019. The couple welcomed their daughter, Quinn, their first child, while living on The Rock.

Blackburn said his perception of Kodiak turned out to be different than what he had heard before relocating.

“Prior to being stationed here, I heard that it was extremely cold and got a lot of snow, which is only partially true,” Blackburn said. “Kodiak actually has a fairly mild climate, and while the overall temperature is a bit colder, it doesn’t get unbearably cold. Even in the winter, Kodiak doesn’t get temperatures below zero.”

Another rumor he heard involved the size of the island’s mosquitoes.

“I also heard there were mosquitos the size of birds,” Blackburn said. “I have yet to see one in Kodiak.”

The island turned into a place that reflected his recreational habits.

“I love to fish and hike the beautiful mountains in Kodiak. I also love to meet up with people at the base gym to play basketball a few times a week,” Blackburn said. A music producer, Blackburn sets his own hours, which allows him extra flexibility.

“I love that I am able to take advantage of the long summer days and pick and choose which days I get to take off,” Blackburn said. “On the really nice, sunny days, I can step out to fish if I want to.”

Blackburn said moving to Alaska was the first time he moved to a new unit with his wife. He said the important thing for military members and families to remember is all duty stations have their positives and negatives, and all places might not work for someone.

“The Kodiak community has something for everybody, but it’s important to decide what is right for your situation,” Blackburn said. “Alaska can actually be really awesome if you stay open minded and get out to explore!”

“My favorite thing about being stationed and operating in Alaska is being able to fly in some of the most beautiful terrain that this region has to offer,” Evans said. “Whether it’s flying over the famed ‘Emerald Isle’ here in Kodiak, or snow-capped Denali and up to the northernmost point in the state in Utqiagvik (Barrow), the views from our aircraft can’t be beat.”

“Everything from hiking our mountain summits and trails in Kodiak, to fishing, camping, four-wheeling, and snowshoeing in the winter time,” Evans said. “As long as you’ve got access to solid gear, there’s an outdoor activity that can be done during any season here.”

Being stationed in Alaska also provides career-training opportunities, according to Evans.

“You have the opportunity to work in some of the wilder, more remote places in our great country,” Evans said. “It requires you to be at the top of your game, and to be able to flex to the (constantly) changing environments and mission tasks that Alaska presents. But it pays it back equally in the experience and adventure of being an operator on the last frontier.”

Petty Officer 2nd Class Sara Beauford, a yeoman stationed at Base Kodiak, is on her second tour in Kodiak, along with her husband and two children. She asked for an extended tour the first year she returned.

Beauford said the best thing about being stationed in Alaska is the dynamic among Coast Guard families.

“I enjoy going on walks with the kids at jewel beach and collecting sea glass,” Beauford said. “We also love going to coffee shops and watching the sea planes take off and land.”

Before her first tour in Alaska, Beauford said she had concerns about its weather, especially rumors about the lack of a summer season.

“I didn’t think summer happened here at all,” Beauford said. “Summer DOES happen and it’s really gorgeous! It’s a nice summer too, not a ‘sweaty, dying from the heat’ summer.”

Beauford said Coast Guard service members who have an opportunity to head to Alaska should seriously consider it.

“If you’re considering getting stationed in Alaska, I say go for it, even if you are a little curious,” Beauford said. “I came to Alaska knowing nothing but the south and desert heat life. I got here and decided I don’t want to be anywhere else!”

To see the full excerpts from the U.S. Coast Guard 17th District, visit their Facebook page at ​​www.facebook.com/USCGAlaska.