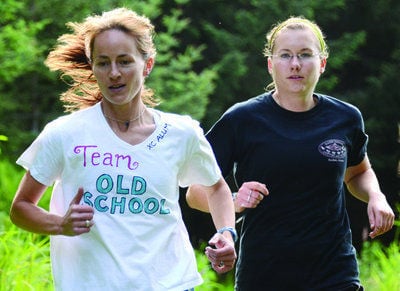 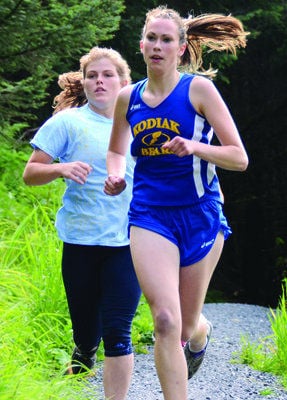 A collection of past Bears toed the line against the 2011 crop of Bears on Friday evening at Fort Abercrombie State Historical Park.

And it was the older Bears who schooled their younger counterparts in a dual cross country meet.

The alumni boys, led by Dylan Anthony, picked up a six-point victory over the current team.

Anthony won the race with a speedy time of 16 minutes,

Chloe Ivanoff paced the alumni girls to a five-point victory over Kodiak. Ivanoff won in 20:58.

“We have turned out so many good graduates the last several years, if they all showed up they would kill us,” Kodiak coach Marcus Dunbar said.

Anthony’s time was five seconds faster than any time he produced wearing the blue and gold at Fort Abercrombie.

“It was cool to see Dylan and Chloe here picking up the wins,” Dunbar said.

Anthony, a 2010 KHS graduate, redshirted last season for the Chico State University cross country team. He said it was different practicing on a college team.

“College is just a whole other ballpark compared to high school,” Anthony said. “People are way more serious. It was a good experience.”

This season, Anthony, the 2009 4A boys cross country state champion, is going to be running in his home state for the University of Alaska Anchorage.

He said he wanted to be closer to home and the Seawolves offered him a scholarship.

Fried, who just completed his collegiate running career at the South Dakota School of Mines, said Anthony’s pace was just too quick.

“It felt like an 800-meter dash out there to start things off,” Fried said. “I wasn’t ready for that.”

Salus, entering his junior cross country season for the University of Idaho, was pleased with finishing third.

“He (Anthony) pretty much owned the show today, which is awesome. He always does that,” Salus said. “I did my best to keep up with Lucas. He kept the pace up for me and I just tried to chug along with him.”

Salus said the alumni run is a great event before heading back to college.

“It brings back many memories with these guys,” he said. “It felt great running with those guys again, because I never get to do that.”

Ivanoff, one of only nine high school girls to run under 20 minutes at Fort Abercrombie, also enjoyed the event. This was her second time competing.

“It is cool seeing everyone again,” she said. “It makes you miss high school a little bit and all of the excitement of coming in as a freshman.”

Ivanoff, a 2009 KHS grad, wrestles for Simon Fraser University. She is entering her sophomore season, but said she does miss running.

“My goal is to run every day, but that typically doesn’t happen,” she said. “It is different knowing that is not your main focus. I miss it a lot. I would rather go outside than in a sweaty mat room.”

“I learned a lot,” she said. “The experience was good. Hopefully, next year I can use what I learned and build off of that.”