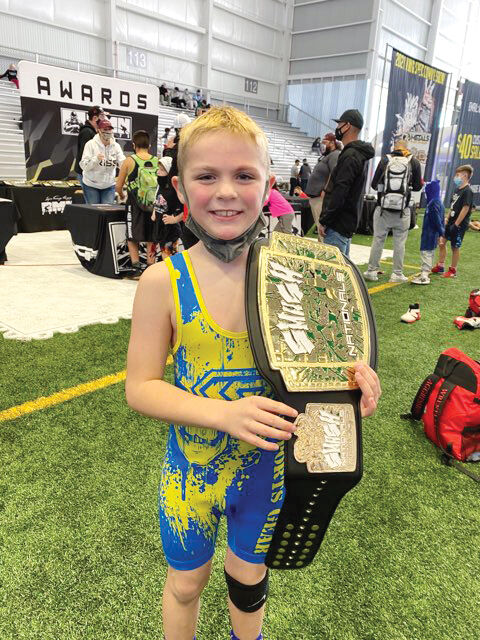 Kodiak’s Torrin Mickelson displays the belt he won for claiming the 8U 87-pound wrestling title at the Smash Nationals over the weekend in Bullhead City, Arizona. 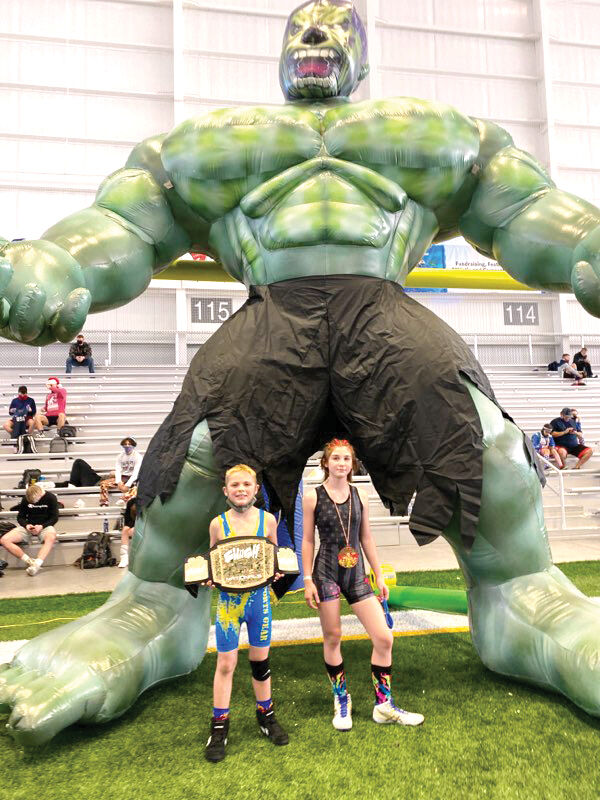 Kodiak’s Torrin, left, and Siena Mickelson pose for a photo at the Smash Nationals over the weekend in Bullhead City, Arizona.

Kodiak’s Torrin Mickelson displays the belt he won for claiming the 8U 87-pound wrestling title at the Smash Nationals over the weekend in Bullhead City, Arizona.

Kodiak’s Torrin, left, and Siena Mickelson pose for a photo at the Smash Nationals over the weekend in Bullhead City, Arizona.

Torrin Mickelson will be the envy of every youth wrestler in Kodiak.

The 8-year-old is the proud new owner of a WWE championship-style belt — gaudy, gold and gigantic.

Mickelson earned the belt that is nearly as tall as he is by smashing the competition at the Smash Nationals wrestling tournament over the weekend in Bullhead City, Arizona.

“He has been packing it around through the airports,” Torrin’s mom, Meagan Mickelson, said on Monday afternoon from Ted Stevens International Airport in Anchorage. “He is pretty excited.”

The third-grader from East Elementary dominated Noah Ramos, 11-3, earned a forfeit win over Jacob Andrae and rallied to beat Ernesto Gutierrez by pinfall to take the title in the four-person, 87-pound title for the 8U division.

In the championship match against Gutierrez, Mickelson was down 5-1 after the first period. He rattled off the next seven points and pinned his opponent in the final round.

Mickelson then was selected to represent a Washington team for the dual portion of the tournament. He fell in both matches — 10-2 to Manny Novellie at 82 pounds and by pinfall to Robert Oganyan at 92 pounds. Both matches were against opponents a year older than Mickelson.

Sienna Mickelson — Torrin’s older sister — also participated in the tournament and placed fifth in the girls’ 101-pound 12U bracket.

Sienna Mickelson, a sixth-grader at Kodiak Middle School, beat Sophia Cardenas 7-0 to open the six-person bracket. She then lost to Isabella Frost 6-1 in the semifinals. Brynlee Sorensen edged Siena Mickelson 2-0 in the consolation semifinals. The Kodiak girl bounced back to beat Cardenas again, 6-3, for fifth place.

This is the fifth year of wrestling for the Mickelson siblings. In July, the two competed at the USA Western States Championships in Utah.

“They haven’t had a chance to do much wrestling, and I don’t know if they are going to this year, so I decided to take them down,” said Meagan about entering her kids in Smash Nationals.

“The only reason I was able to go and take them is because we are all online (schooling) now.”

As for the belt, Torrin already has a place picked out to display it.