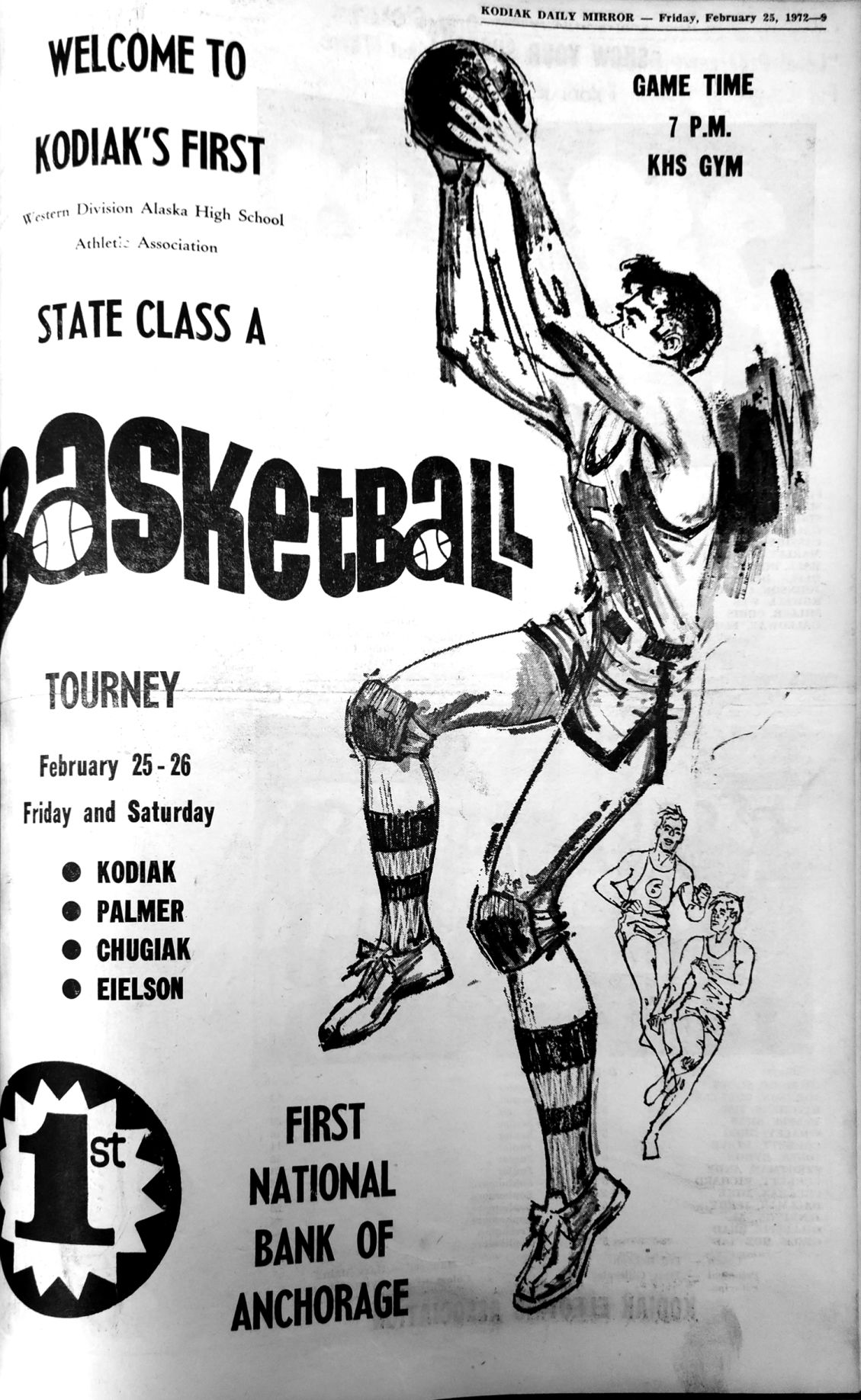 The cover of the program for the State Class A Basketball Tournament that appeared in the Feb. 25, 1972 edition of the Kodiak Daily Mirror. 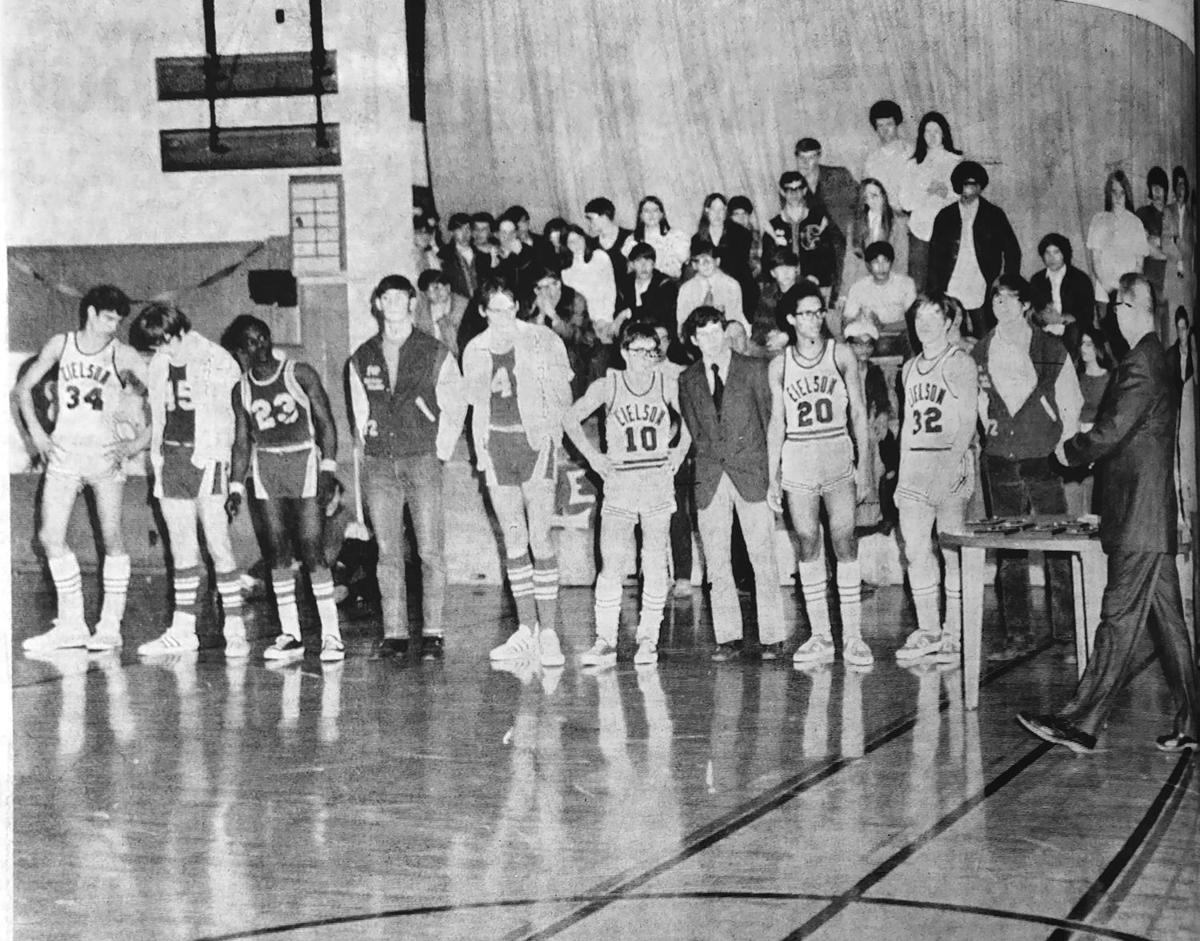 The cover of the program for the State Class A Basketball Tournament that appeared in the Feb. 25, 1972 edition of the Kodiak Daily Mirror.

Kodiak, Eielson, Palmer and Chugiak played in the two-day extravaganza.

“Having the Class A Basketball Tournament culminated a 16-year dream for me as during my tenure as basketball coach here in Kodiak and as athletic director, I have watched group after group prepare for travel to hostile and strange gyms and crowds,” Joe Floyd wrote in a 1972 Kodiak Daily Mirror article.

The Bears, led by third-year coach Harry Mickelson, were the top seed, while Fairbanks-based Eielson was seeded second with a 19-7 record.

“The team has gained the experience, quickness and height to control any ball game, and at times look to be the best scramblers in the state,” a 1972 Daily Mirror article said. “The Bear will have to watch against a tendency to let down when the going looks easy, but shrewd use of their man-to-man defense, plus their capability to fall back on a strong defense should carry them through.”

Kodiak, with 11 seniors and one junior, were the defending champions and heavy favorites. The Bears played like that in the opening round, chugging past Chugiak 73-57. Senior forward Rob Foster and senior center Mike Slagle each poured in 19 points.

Eielson easily defeated Palmer, 73-51, in the other semifinal to set up the much-anticipated championship battle between the Bears and the Ravens.

Eielson was ready for Kodiak and used a balanced offensive attack to steal an 80-74 victory.

The Ravens’ five starters all scored in double-figures — Scott Gilmore and Bryon Jones with 21 points each, Shane McAfee and Mike Freeman with 13 points apiece, and Rich Corbett with 12 points.

Foster was brilliant in defeat, scoring 17 of his 39 game-high points in the opening half. Ronnie Singleton chipped in 20 points.

The Daily Mirror’s report of the game read like this: “The Bears, with Foster and Singleton, dominating the offense, could not match the team balance of the fired-up and smooth Eielson Ravens.”

Kodiak trailed 56-53 after the third quarter and, with two minutes left in regulation, forged a tie on two Singleton free throws.

Eielson sealed the victory with a fastbreak bucket and free throws.

By finishing second, Kodiak earned a trip to the All-Western Alaska Tournament in Anchorage. The eight top teams in the four classifications — C, B, A and AA — made up the field.

The Bears finished third — the same place they finished in 1971 — and avenged their loss to the Ravens.

In the third-place game, Kodiak, behind 33 points from Foster, disposed of Eielson 84-72.

Slagle chipped in 27 points as the Bears finished the season with a 21-10 record.

Lathrop beat West 62-61 for the title and went on to top Juneau in a best-of-3 series for the state title.

Some of those new cases have shown up at Fairbanks area health care facilities and Alaska Chief Medical Officer Anne Zink says Fairbanks is a hotspot in the state for the disease.