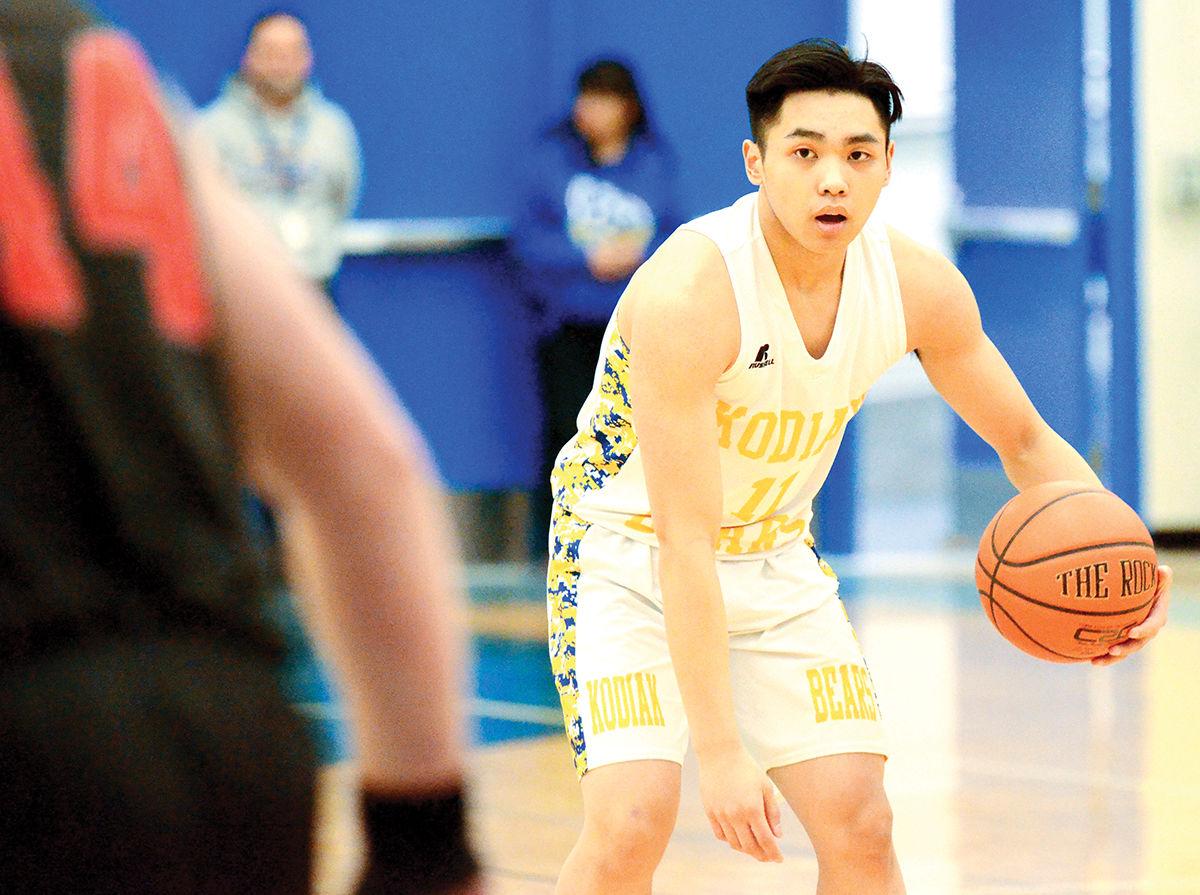 Kodiak’s Sam Galindo dribbles during a basketball game against Wasilla in January at Kodiak High School. 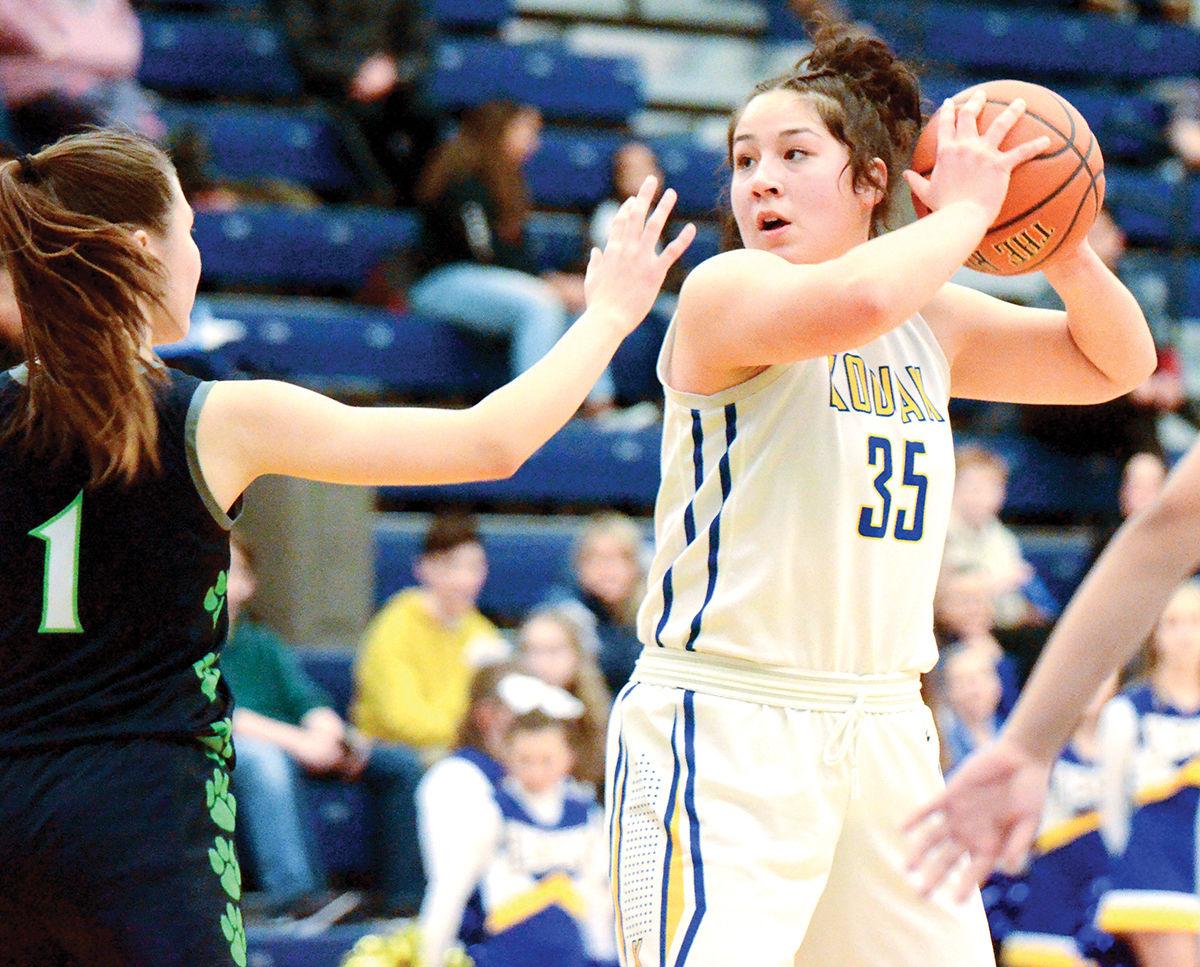 Kodiak’s Leslie Spear holds the ball during a basketball game against Redington in January at Kodiak HIgh School.

Kodiak’s Sam Galindo dribbles during a basketball game against Wasilla in January at Kodiak High School.

Kodiak’s Leslie Spear holds the ball during a basketball game against Redington in January at Kodiak HIgh School.

Standing near mid-court, Sam Galindo, while effortlessly dribbling a basketball with his left hand, fixed his eyes on the defender, hovering feet in front of him.

With a sudden burst, the speedy 5-foot-10 southpaw guard blew by his defender and, after a few bounces of the ball, cut through the lane for an easy layup.

That score came with 2 minutes, 51 seconds left in Kodiak’s regular-season finale against Redington on Feb. 29.

Seconds later, Galindo checked out of the game and was embraced by his coaches and teammates.

As it turned out, that was the final basket of Galindo’s splendid career.

On March 15, the Alaska Students Activities Association canceled the remainder of the basketball season due to the COVID-19 outbreak.

Wiping out regional and state tournaments ended careers, not allowing seniors an opportunity to finish what they started.

Galindo was one of those seniors.

Earlier this week, Galindo earned a postseason honor, being named to the Northern Lights Conference second team. He was the only Kodiak player represented on the all-conference team.

“He has been around the program for four years and was pretty solid for me,” Kodiak coach David Anderson said after Galindo’s final game. “I knew he was going to be a special player when we started playing him as a starter.”

The night before his last game, Galindo got emotional when he addressed fans during a tribute for seniors. He thanked coaches, teammates and supporters for helping him progress as a player.

“He really bought into what we do here, and it has it has really been a focus on him the last couple of years as a player,” Anderson said. “All those emotions come out when you realize it is your last games here.”

Galindo — the younger brother of former Kodiak star Mark Galindo — averaged a team-best 10.5 points per game. His 36 made 3-pointers were second on the team.

Galindo, who started as a sophomore, concluded his career with 534 points.

After scoring 16 points to lead Kodiak to an 11-point win over Wasilla in January, Galindo said he was playing with more confidence this season.

“Playing with this young team is fun,” he said. “They are hungry, ready to win and always willing to learn.”

With Galindo helping the younger players, Kodiak won its final four games of the regular season, which made it all the more difficult to see the season end abruptly.

“I can’t say enough about Sam or Edgee (Ocampo). Those two guys are the heart and soul of the team,” Anderson told the Daily Mirror earlier this season.

Senior Josh Barnett was named to the good sport team.

Colony junior Patrick McMahon was tabbed the conference’s most valuable player, while the Knights’ Tom Berg earned coach of the year honors.

The 6-foot-2 junior was named to the conference’s second team, an honor she also earned as a sophomore.

Spear was dominant this season, averaging a team-best 13.5 points per game. She eclipsed 20 points five times, garnering a career-high 28 points in the first game of the season.

Junior Angel Mangrobang was placed on the good sports team.

Kodiak’s Shannon Polhemus was named the NLC cheer coach of the year.

This was Polhemus’ first year in charge of the team.

Annora Virgin was placed on the good sport team.