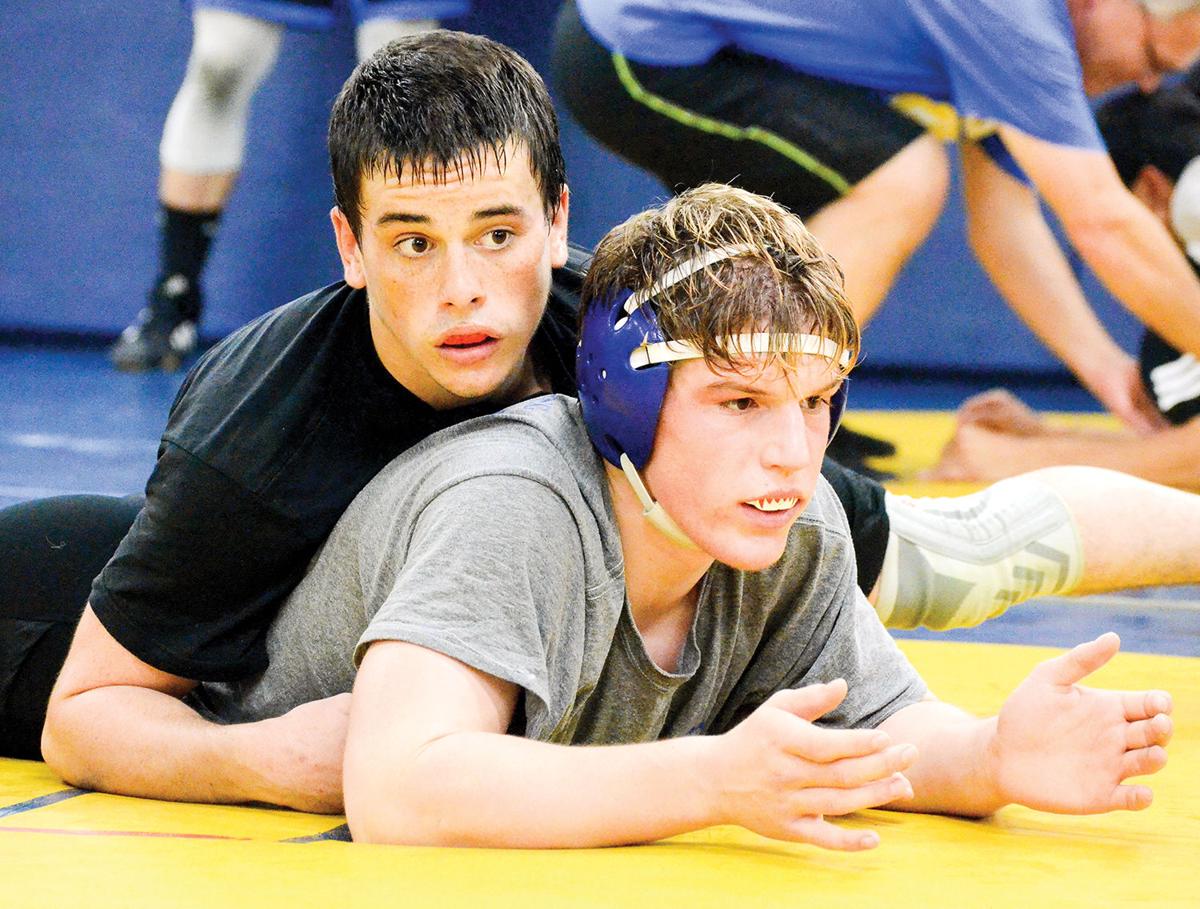 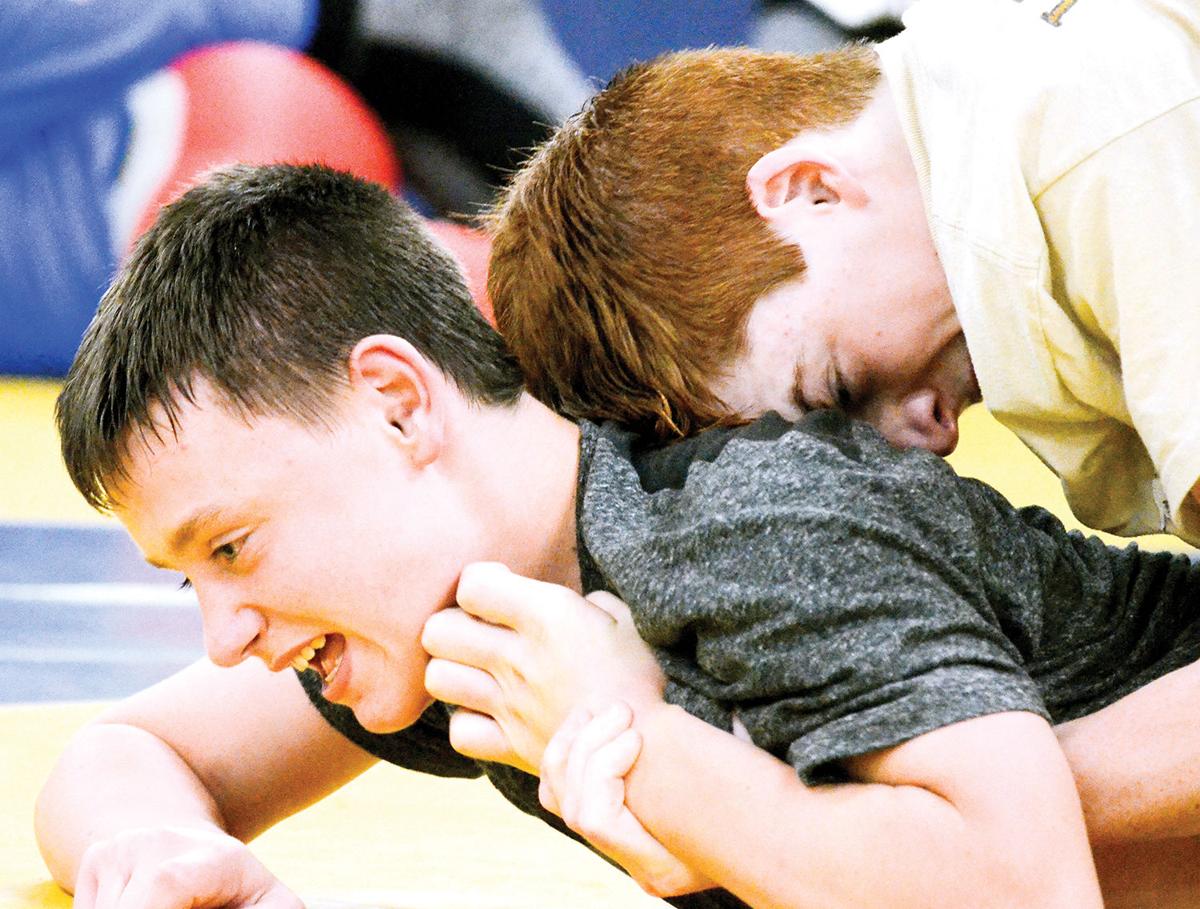 Kodiak’s Gage Lloring, bottom, gets held down by a teammate during a wrestling practice Tuesday in the high school mat room. 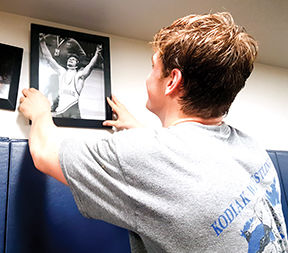 Kodiak’s Josh Nummer hangs up a photo of him on the championship wall inside the mat room at the high school. Nummer won the 160-pound state title last season.

Kodiak’s Gage Lloring, bottom, gets held down by a teammate during a wrestling practice Tuesday in the high school mat room.

Kodiak’s Josh Nummer hangs up a photo of him on the championship wall inside the mat room at the high school. Nummer won the 160-pound state title last season.

hen it comes to grueling sports, wrestling ranks near the top.

Six minutes — three two-minute rounds — of grappling an opponent is draining on the body.

As taxing as a match is, Kodiak’s biggest obstacle this season just might be its schedule and lack of home dates.

The Bears’ 2018-19 schedule includes eight trips off-island and only one home meet — Nov. 30-Dec. 1. And even then, third-year coach Junior Valladolid isn’t sure what teams he will be hosting for the 40th Robin Hervey Tournament.

With big tournaments every weekend, the coach said it’s tough for Kodiak to persuade teams on the road system to come wrestle on The Rock.

“They can get on a bus, drive down the road and get as many matches as they would if they were to fly over here,” Valladolid said.

After hosting to-be-determined teams, Kodiak is back on the road for the Northern Lights Conference Championships in Palmer (Dec. 7-8) and the state championships in Anchorage (Dec. 14-15).

“It is not fair for the kids, the community or the program,” said Valladolid, a three-time state champion wrestler for Kodiak.

Valladolid would like to see Region III adopt rules — like basketball and volleyball have — that mandate a conference team travel to the island every other year for competition. He also tossed out the idea that Kodiak could get in the rotation with the Mat-Su Valley and Kenai Peninsula to host the North/South Tournament.

“Our community never gets to watch our wrestlers. They don’t understand the hard work that they put in,” Valladolid said. “It is difficult for a kid to get motivated if they are working this hard and they never get to showcase it in front of their home crowd. Could you imagine going to a drama club and never getting to perform.”

Kodiak leaves on a Thursday on all but one trip, which means the team gives up a practice day and the wrestlers miss one to two days of school. That means Valladolid only gets six hours of week to work with his team in the high school’s mat room and a make-shift practice in an opposing team’s mat room.

“We have to get through a lot of adversity,” Valladolid said. “The seniors are used to it; it is a shock for the freshmen.”

With only six of Kodiak’s 27 wrestlers being upperclassmen, Kodiak is stocked with freshmen — nine — and sophomores, many experiencing all this travel for the first time. Valladolid’s main priority, though, is teaching them the skills to succeed on the mat. He likes what he sees so far as his team, which finished fifth at last year’s NLC Championships, opens the season today at the Houston Altercation.

“I’m blown away with how much potential the first-year wrestlers are showing,” Valladolid said. “They are competing with experienced wrestlers.”

For the first time since Joel Valdez in 2014, Kodiak returns a state champion wrestler.

Josh Nummer claimed last year’s 160-pound title at the state championships and is looking to become Kodiak’s first repeat state champion since Jimmy Eggemeyer in 2007 and 2008.

Nummer, who was voted last year’s most outstanding wrestler at state, will be competing mainly at 171 pounds this season.

“He wants to outwork everybody,” Valladolid said. “He is so committed to his goals that I don’t have to motivate him that much. He is committed to the time that he puts into it.”

With a young team, Valladolid said it is good to have Nummer — a two-time state placer — and senior James Goodman leading workouts and setting examples for Kodiak’s future stars.

“They drill like they are going to wrestle and that is what we are trying to get others to do,” Valladolid said. “If you are not doing your best, or trying to be perfect in here, it translates on to the mat when you start wrestling. They practice every move to perfection.”

There will be new weight classes for Alaska high school wrestling this season, marking the first weight class changes since the 2012-13 season.

The most noticeable changes are the removal of the 98- and 195-pound classes and an extra division in the middle weight classes.

Valladolid was not on board with the change, especially with eliminating the 98-pound class.

“Some people think that it’s not that big of a deal, but what about the guy who weighs 90 pounds? He now has to bump up to 103 pounds,” Valladolid said.

Valladolid, though, said the change is beneficial for Kodiak, a team loaded with middle-weight wrestlers. He said his team, right now, will not be filling the 103-pound division and the top two weight classes — 215 and 285 — to begin the season.

“The biggest guys that we have are 190,” Vallladolid said.