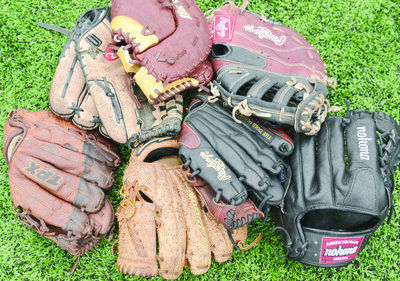 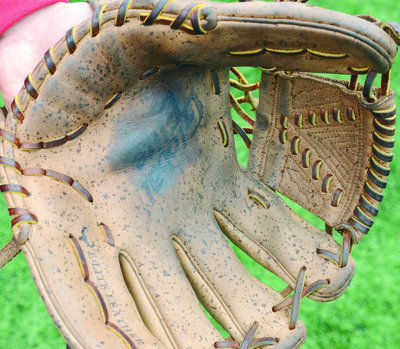 Austin Frick displays one of his six gloves at a Kodiak Post 17 practice in 2014 at Baranof Field. Derek Clarkston/Kodiak Daily Mirror

Austin Frick displays one of his six gloves at a Kodiak Post 17 practice in 2014 at Baranof Field. Derek Clarkston/Kodiak Daily Mirror

Baseball gloves come in all forms and have been around since the late 1800s.

The common thread is that all gloves are cherished by their users.

“There is a bond between a player and his mitt,” Kodiak Post 17’s Brandan Pickett said. “You can’t use somebody else’s mitt, it just doesn’t feel right.”

Pickett totes around two gloves — a catcher’s mitt and an infield glove — while other players have more of a variety.

With such an array of leather, it can be easy to walk onto the field with the wrong mitt, but not for Arnold.

Off the field, Arnold takes good care of his gloves. He said it takes him two weeks to break in a new glove.

“I oil them and sleep with them under my pillow and I put rubber bands around them,” he said.

Really, under the pillow?

“You lay on it so it gets floppy,” Arnold said.

Not everybody goes to that extent in breaking in a mitt. Austin Frick has never oiled any of his six gloves. He keeps his mitts in his bag during the season and shelves them in the offseason.

The recently graduated Kodiak High School player has two outfield and infield gloves, and a first baseman and catcher’s mitt. One of his outfielder’s gloves was his dad’s college glove that was passed down to him.

Frick has used all of his gloves during his career that started in Idaho, but only uses his infielder’s mitt during the Legion season.

His favorite glove is the one he got this year to play shortstop — a Mizuno.

“It is soft. The inside is completely soft,” Frick said. “It has a good feel to it.”

An infield mitt is the shortest of all the gloves, measuring in between 10 and 12 inches.

“All it is is an extension of your hand,” Pickett said. “If it is smaller, the ball doesn’t get stuck in the pocket. All you need is just a little padding so it doesn’t hurt.”

In comparison, an outfield glove has a big pocket and is at least 13 inches long -- which makes it easier to catch fly balls. A first baseman’s mitt is bigger on one side to aid in scooping the ball, while the catcher’s mitt has the most padding.

Josiah Chya’s main glove is his catcher’s mitt, which he squeezes the top of to help break it in.

“It just makes the pocket bigger and makes it easier to catch the balls,” Chya said. “The hard part about breaking it in is that it is thick leather.”

“I don’t let anyone use it besides me,” he said. “If anyone uses it, that is when it gets messed up and I get mad.”