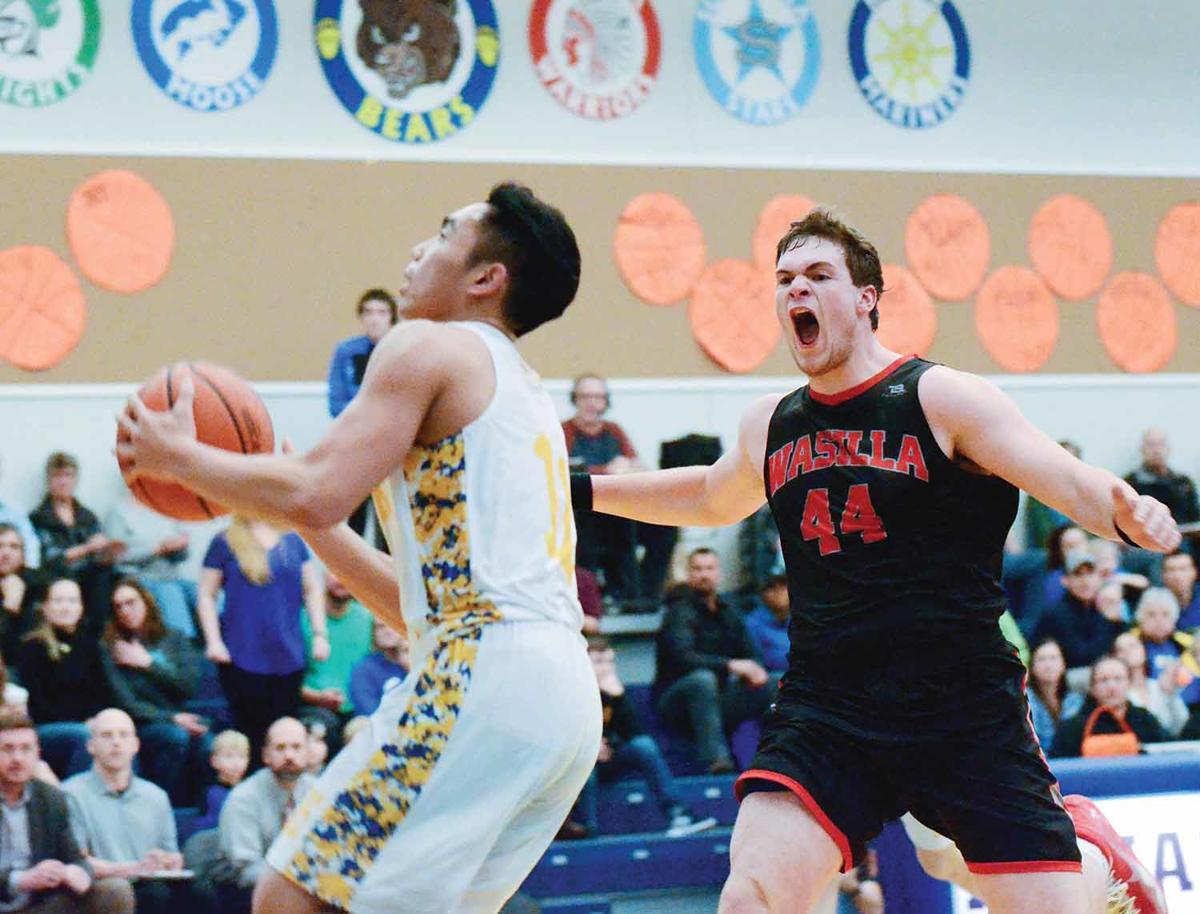 Wasilla’s Payson White yells at Kodiak’s Mark Galindo as he goes in for a layup during a high school boys basketball game Friday at Kodiak High School. Galindo made the bucket and finished with a game-high 16 points to lead Kodiak to a 35-24 win. 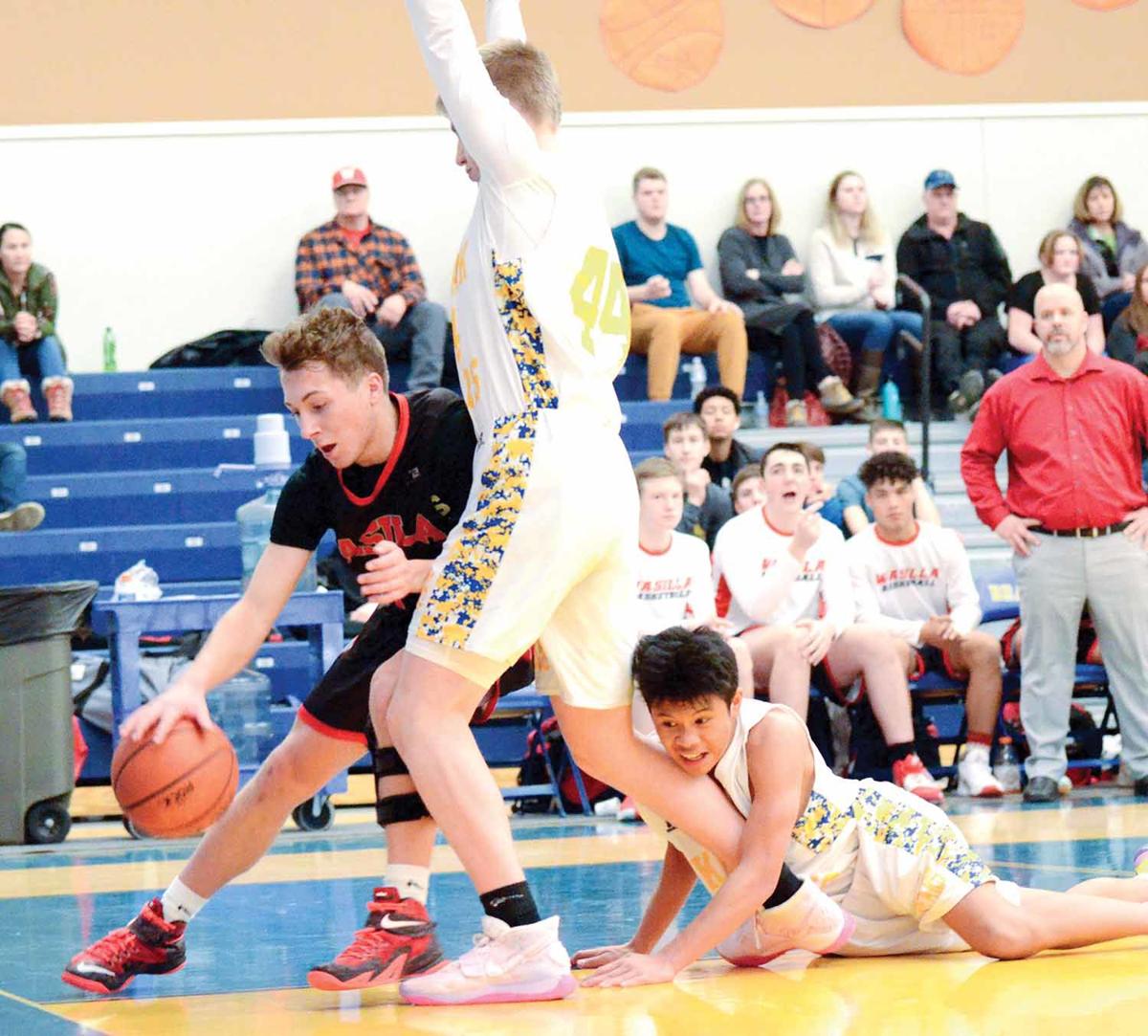 Kodiak’s Jackson Krug guards a Wasilla player while a teammate falls on his leg during a high school boys basketball game Friday at Kodiak HIigh School.

Wasilla’s Payson White yells at Kodiak’s Mark Galindo as he goes in for a layup during a high school boys basketball game Friday at Kodiak High School. Galindo made the bucket and finished with a game-high 16 points to lead Kodiak to a 35-24 win.

Kodiak’s Jackson Krug guards a Wasilla player while a teammate falls on his leg during a high school boys basketball game Friday at Kodiak HIigh School.

Over the years, low-scoring, rugged affairs have become the norm for Kodiak when facing a Northern Lights Conference opponent.

The Bears turned in another performance on Friday that didn’t feature a ton of pretty plays but ended with a win.

Led by a pesky defense and timely shooting from senior Sam Galindo, Kodiak fended off Wasilla 35-24 in a boys basketball game at Kodiak High School.

The Bears picked up their first NLC win of the season, a game after falling to Soldotna, 33-32, in the closing seconds. Kodiak has not broken 35 points in the past three games.

“There is a coach over in Soldotna last week that said, ‘I would rather go to the dentist than play you guys. I never know what you are going to give us,’” Kodiak coach David Anderson said. “That is a compliment to the kids on how they play — they play hard and go out there defensively.”

“We controlled the tempo of the game,” Anderson said.

“This is how I think our team is going to be, these slower, grind-out games.”

Leading 12-9 at halftime, Kodiak nearly doubled its point total in the first three minutes of the second half.

Shawn Case started the third quarter with a triple — he had three for the game — and Galindo followed with six straight points to give the Bears the biggest advantage of the contest at 21-11.

Wasilla, which held a sizable height advantage with three players over 6-feet-4, chipped away at the lead. Donnie Lawhead scored seven straight points to begin the fourth, which was punctuated by a pull-up 3-pointer several feet behind the arc to cut the lead to one with 6:04 left.

Just as it appeared that Wasilla was going to seize control of the game, Galindo stepped up.

The guard, who missed a potential game-winner against Soldotna a week ago, drilled a triple to put his team up by four.

The Warriors didn’t score the rest of the way.

“We have a lot of trust in him. We want him to take those shots this year,” Anderson said. “He had opportunities last year, but he felt it was the right of passage for the seniors above him. This year it is his turn, and he is doing what we want him to do.”

Galindo finished with a game-high 16 points, none bigger than his final three markers.

“Basketball is a game of runs and momentum swings. My shot swung the momentum,” Galindo said.

Galindo, who has been on varsity since his sophomore season, is averaging a career-best 11.2 points per game. He went for a season-high 20 points earlier this season against Glennallen and has scored in double figures seven out of 11 games.

“I have way more confidence and am having way more fun. This young team is fun. They are hungry, they want to win and are always ready to learn,” he said.

Kodiak played most of the game with three sophomores on the court.  Case — one of those sophomores — ended with 11 points, while another sophomore, Frankie Marcelo, wowed the crowd with his dribbling.

“This is a great win for us — we are young,” Anderson said. “These kids are getting a great experience.”

The script was flipped on Saturday as Wasilla walked away with a 34-24 win.

The Warriors led 12-3 after the first quarter and maintained a double-digit lead for the majority of the contest.

“We both came out and tried to play our own styles. It worked out for them yesterday (Friday), and it worked out for us today (Saturday),” longtime Wasilla coach Ryan Engebretsen said.

“Dave does a great job with his kids and getting them to play the style they want to play — the style that he thinks is going to best win games, and he has done a good job of that the last handful of years.”

Engebretsen knows how hard it is to win on The Rock. His troops visited the island last year and split — winning 40-21 and losing 40-39.

To balance out home schedules for the Kodiak boys and girls, Engebretsen graciously gave up this home weekend to be visitors this year.

“I was more than willing to do so because of the gratitude I have for the Kodiak program and the Kodiak AD,” he said. “Coming two years in a row is not easy.”

Half of Kodiak’s 24 points came via 3-pointers.

Galindo, who picked up two early fouls, sat all of the second quarter and ended was held to only two points.

Kodiak (4-7, 1-3 NLC) travels to Fairbanks to play in a tournament at West Valley High School that begins Thursday.