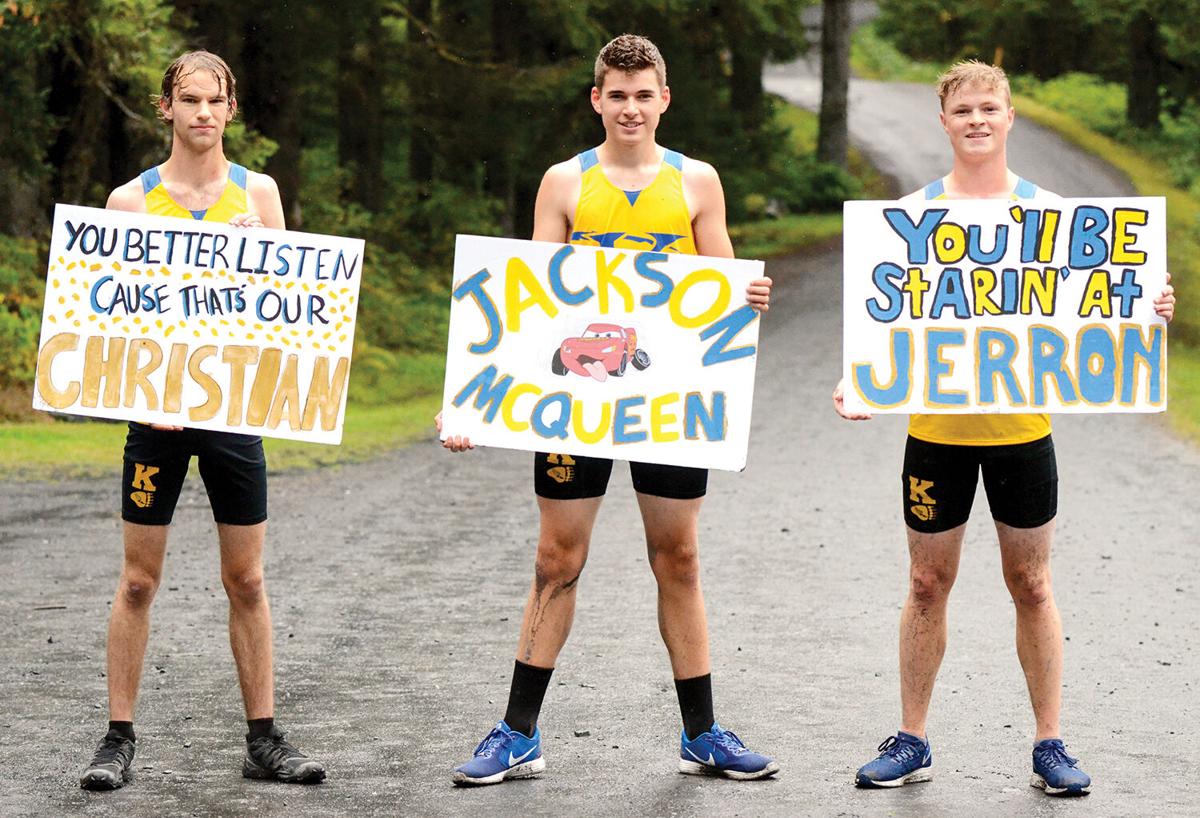 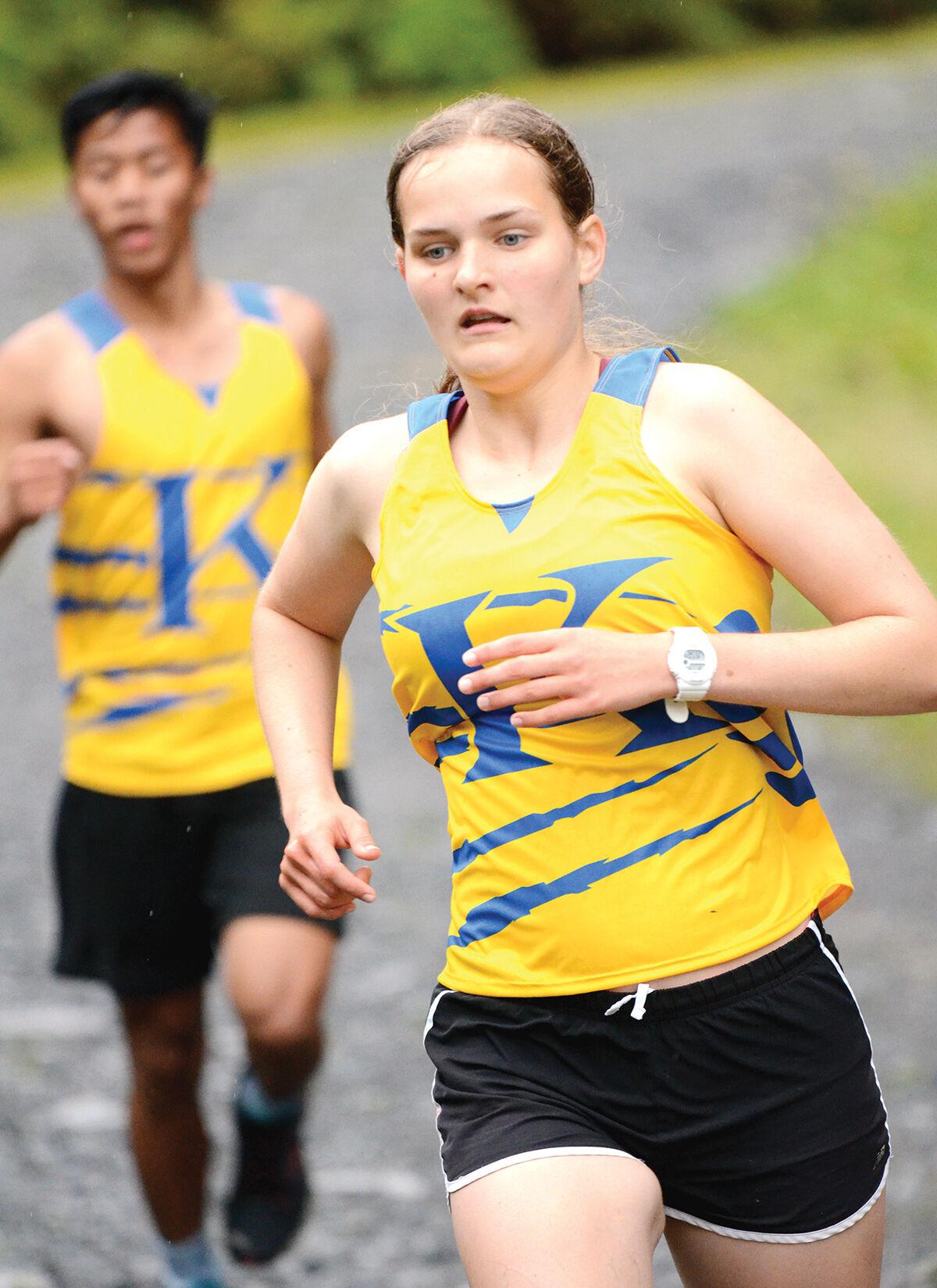 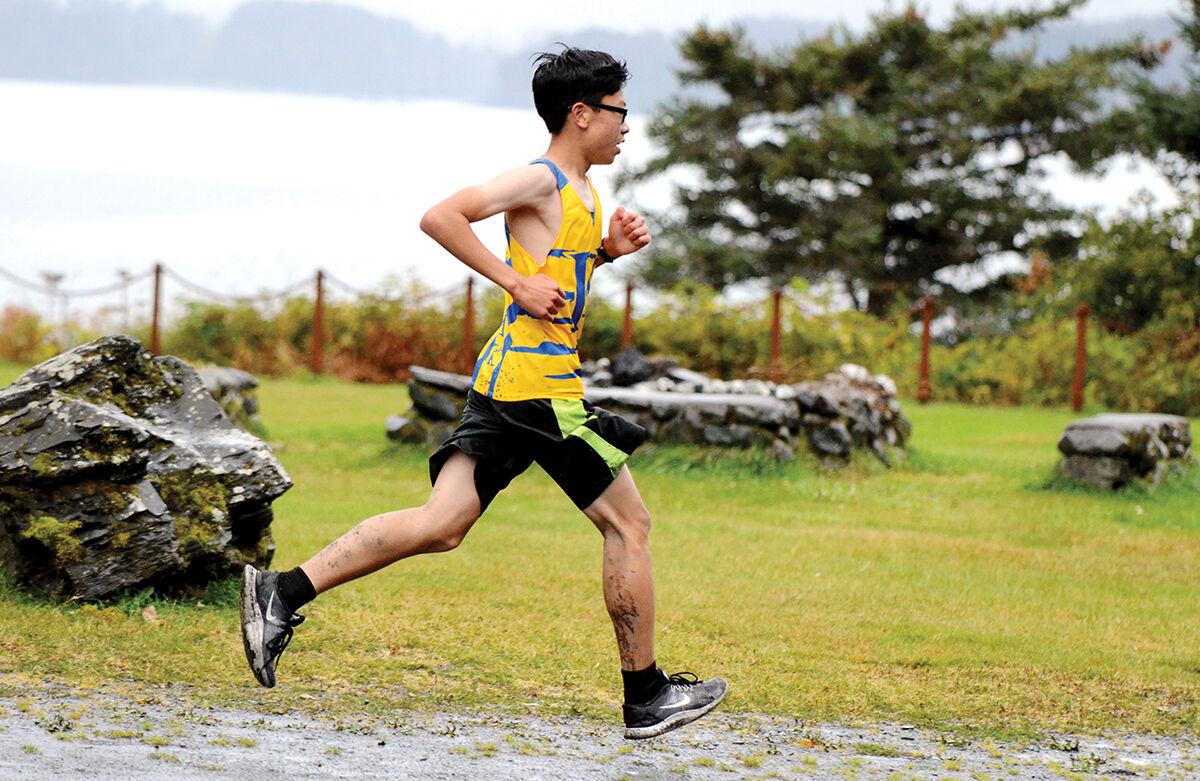 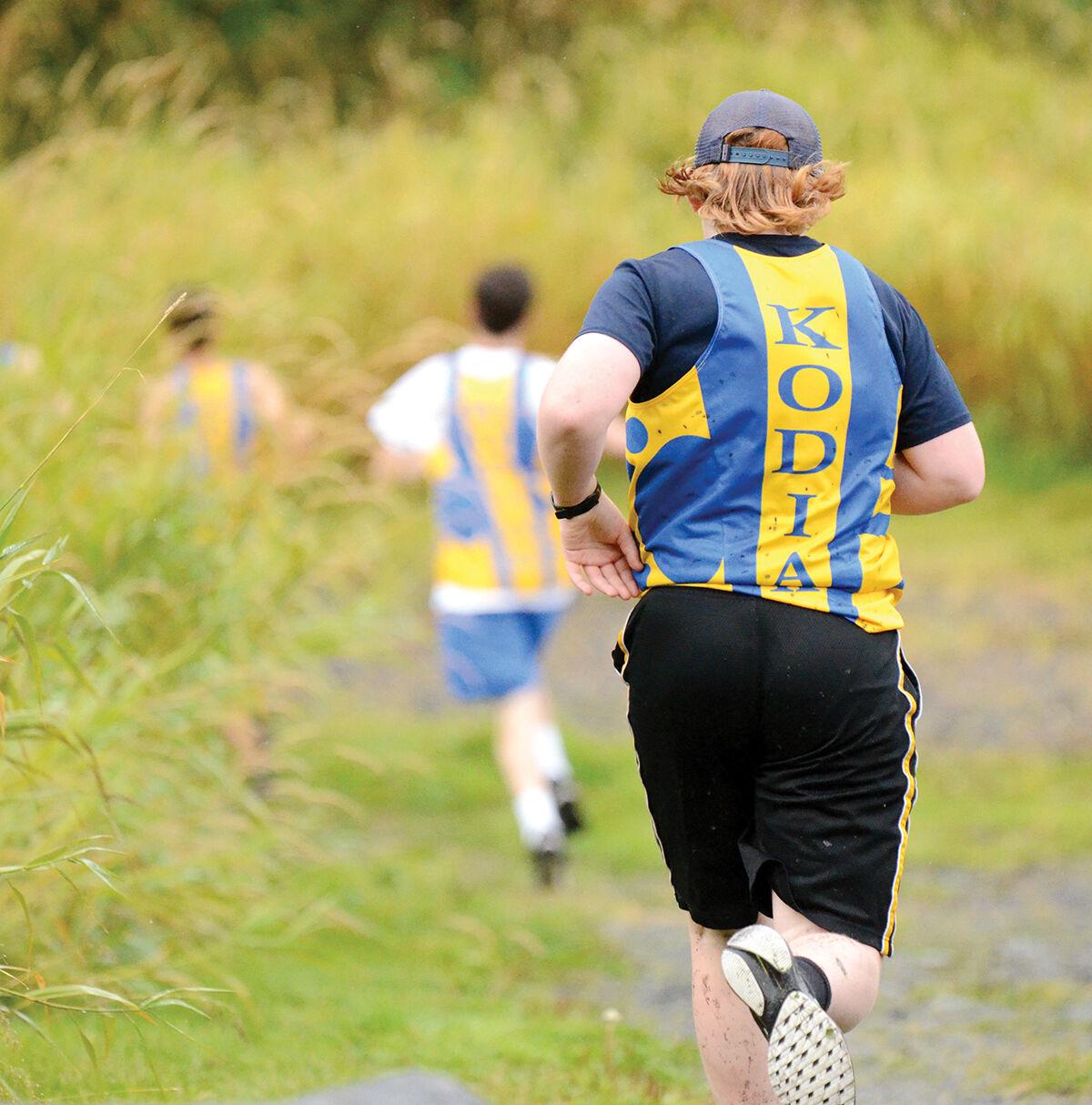 Having returned from a summer of tendering, Friday was Bruce’s 10th practice and the first race of his final prep season.

“It’s been kind of tough because I am chasing after these freshmen,” said Bruce after the team’s third time trial of the season. “I knew if I started when they started, I would be up there and breaking my own personal records.”

But instead of training, Bruce was tendering around the Kodiak archipelago.

“I sat around and got legs of Jello,” he joked.

Usually, a student needs to log 10 practices before competing, but not this season as COVID-19 has thrown a wrench into what a season should resemble.

“I didn’t even bother putting in the calculations on my excel spreadsheet for the number of practices because I knew it didn’t matter — by the time we get to regions, everyone will have 10 practices,” Kodiak coach Ashley Mortenson said.

All three seniors — the fourth Emily Lorring was not at the intrasquad meet — were given hand-made signs and a rose,  a team tradition after the final home race of the season.

“They are all really hard workers,” Mortenson said. “All four of them are really great at challenging themselves where ever they are at and looking to make improvements.”

Having been on the team for four years, Roberts is the elder of the group. Both Harver and Bruce are in year two, while Lorring has been around for three seasons.

The fact that the team has only been able to conduct on-island team time trials because of a district-imposed travel ban through September hasn’t ruined the seniors’ season. It has brought them closer together.

“It has really built up our team as a competitive community,” Roberts said. “It is all about challenging each other this year, and it has been a great season.”

Roberts hopes to continue running at the next level while working towards an engineering degree in aeronautics.

“I’m going to miss having all these people that I have grown with through the years of high school,” he said.

Harver dropped nearly 30 seconds from early-season times at The Fort. He wasn’t sure what he would miss about running for such a historic program.

“I would rather not think about that and just enjoy it while I still can,” said Harver, who is looking into a career in criminal justice.

Bruce — a wrestler — was encouraged by friends and coaches to join the cross country team last year. He did and was even looking forward to the track season before it was wiped out because of the pandemic.

“I’m more of a mid-distance guy, so long-distance and endurance is something I am working on, and I am getting better at it,” said Bruce, who would like to become a pilot.

According to Mortenson, the Region III Championships remains a go but will have a different format this season with schools in the Mat-Su Valley and the Kenai Peninsula competing in separate meets.

Joining Kodiak and Soldotna in the race will be 3A schools Homer, Seward and Kenai. The meet will be scored separately.

“We are hopeful that we will get to go,” Mortenson said. “It will be varsity only, which is tough because we really love bringing a full JV to regions for the team unity and the experience.”

The uniform is bright yellow with a giant blue K on the front, a blue bear paw print on the left side and blue claw streaks across the front. Kodiak is vertically written down the back of the top.

The design is from a warm-up jacket that the team wore during the 2000s.

“We wanted to tie in the history with the teams from the past,” Mortenson said.

Having a young team with no connection to the state championship teams of prior seasons (2006-2008 and 2014), the uniform allowed Mortenson to educate her athletes.

“We took a few minutes to talk about where our team has come from and what they are inheriting,” the coach said.

With a wet course on Friday, the uniforms did not stay clean for very long.

“You got to christen a cross country uniform with mud, that is the only way to break it in,” Mortenson said.

Marcus Dunbar, the most prolific running coach in the history of Kodiak High School, has returned to coaching, leading the Kodiak Middle School cross country team.

During his nearly two-decade tenure with the Bears, he collected eight state team titles while coaching a slew of state and individual champions.

“He is about the most overqualified middle school coach around,” Mortenson said.

Dunbar was in line to take over last season’s middle school track team before COVID-19 hit and canceled spring sports.

Dunbar started his Kodiak coaching career at the middle school when he arrived on island in 1998 after leading Bartlett High School’s running programs to four state titles.

Dunbar said there are 55 runners on his roster, many of whom ran in Friday’s race.

Mortenson, who coached under Dunbar for five seasons before taking over for him in 2018, is excited to have him back coaching.

“We are big fans of connecting the middle school and high school teams, letting them inspire, teach and lead each other,” she said.

Both the high school and middle school teams will be running Thursday at Baranof Park for the Grand Slam Classic. The classic, which includes students from kindergarten to 12th grade, begins at 4:15 p.m.

On Saturday, the high school and middle school teams will be at Bear Valley Golf Course. The race begins at 9 a.m.