The Kodiak Hockey League 18U team gathers for a team photo after finishing second at the 18U B Alaska State Hockey Tournament Sunday at the Curtis D. Menard Center in Wasilla. 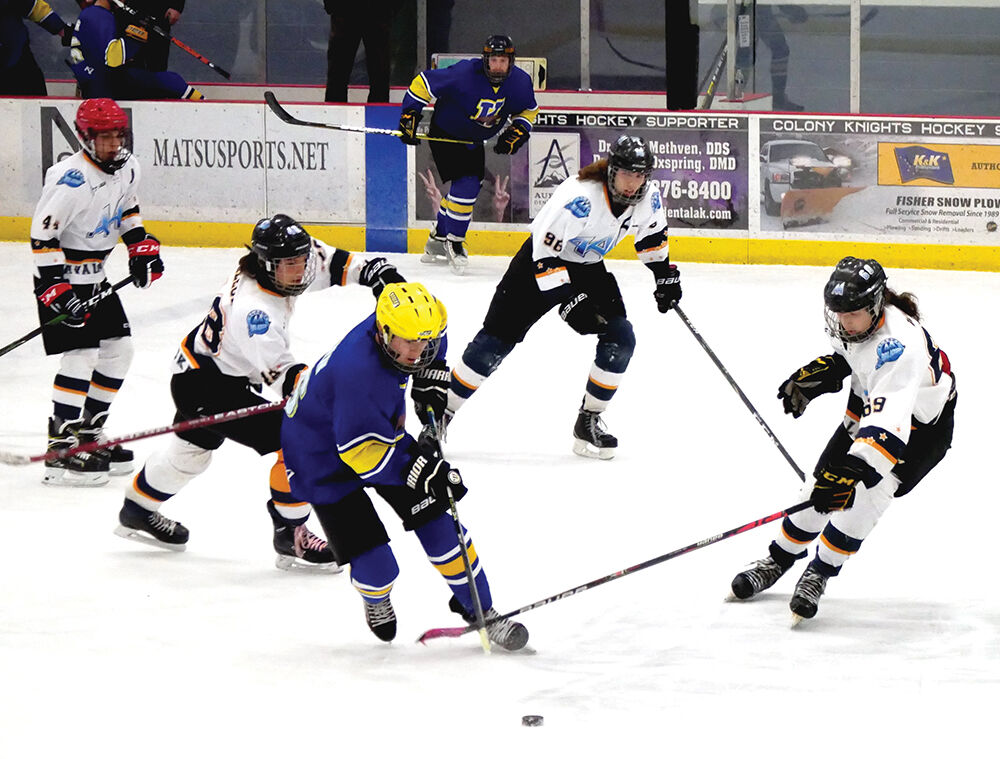 A Kodiak player controls the puck during a game at the18U B Alaska State Hockey Tournament in Wasilla. 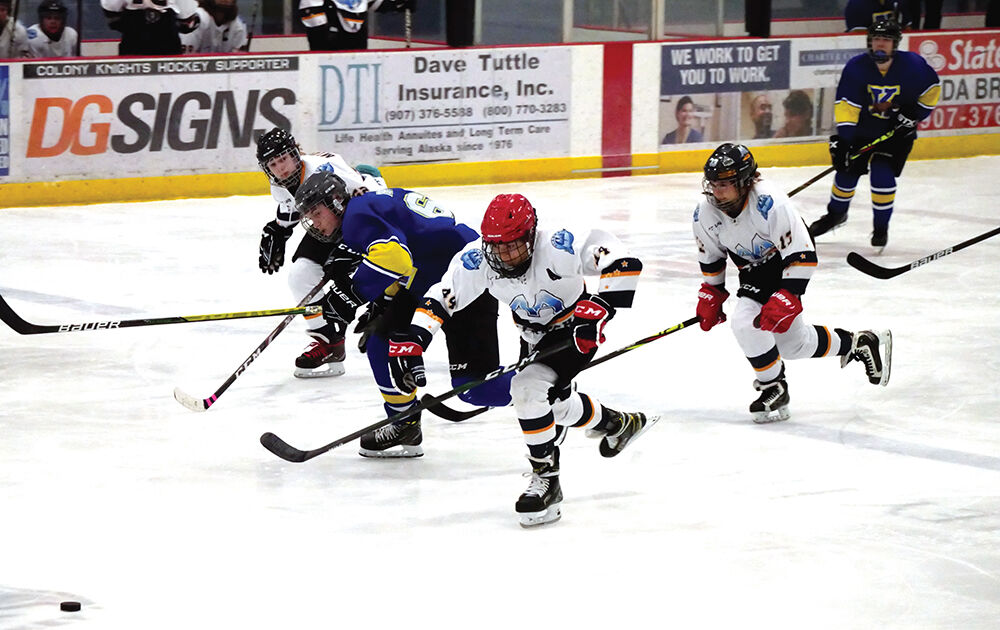 Skaters race for the puck during a game at the18U B Alaska State Hockey Tournament last weekend in Wasilla.

The Kodiak Hockey League 18U team gathers for a team photo after finishing second at the 18U B Alaska State Hockey Tournament Sunday at the Curtis D. Menard Center in Wasilla.

A Kodiak player controls the puck during a game at the18U B Alaska State Hockey Tournament in Wasilla.

Skaters race for the puck during a game at the18U B Alaska State Hockey Tournament last weekend in Wasilla.

Kodiak Hockey League’s 18U squad capped an unusual season with an incredible run through the 18U B Alaska State Hockey Tournament.

The islanders used an overtime victory over the Anchorage Hockey Association’s Blankenship squad to reach the finals before falling 8-2 to Alaska Avalanche Sunday at the Curtis D. Menard Sports Center in Wasilla.

The runner-up finish marks the 18U’s best state showing since 2017, when the squad placed second in the Tier IV tournament. In 2016, Kodiak’s 18U team won the midget Tier IV state title.

“It was a tremendous amount of fun. Great group of kids,” Kodiak coach John Glover said. “Super excited for the seniors in that group to be able to make a run that they did and have so much fun doing it.”

Kodiak was on the path of clinching its second 18U state title until it ran into B division power Alaska Avalanche in the finals. Leading up to the finals, the Avalanche only allowed one goal in four games, including a pair of 1-0 nail-biters.

Kodiak kept it close against the two-time defending B state champions and trailed 3-1 after the first period and 4-2 after the second period. A flurry of goals by the Avalanche in the final stanza sealed their third straight B state title.

Craig scored Kodiak’s first goal, while Gavin Baxter’s goal brought the locals to within 3-2 with eight minutes left in the second. Anchorage’s goalkeeper was stout the rest of the way, fending off Kodiak’s shot attempts.

With only 10 players, Glover said Kodiak had the shortest bench of the eight teams in the tournament.

“They had a lot more gas than we did, so to speak,” Glover said. “It was evident, especially in the third period ... In the grand scheme of things, Kodiak held its own.”

In the semifinals, Kodiak slipped past AHA Blankenship 3-2 in overtime. Horn, Wyatt Delgado and Blake Terry supplied goals for Kodiak.

Kodiak rallied to tie the game in the third period and won it on Terry’s goal at the 5-minute, 17-second mark of the 8-minute overtime period.

“When that puck went into the back of the net, those kids went bonkers. You would have thought it was the Stanley Cup,” Glover said.

Kodiak went 1-0-2 in pool play to advance to the semifinals. The locals topped AHA Vandenbos 5-0 and tied HCF Paul 2-2 and the Mustangs 3-3.

Baxter shined for Kodiak, accounting for 7 of the team’s 15 goals. The youngster also had three assists, all in the semifinal victory. Callahan led Kodiak with six assists.

Due to the pandemic, Kodiak made only two trips off-island this season. The first trip was in mid-February to Anchorage and included eight games and a scrimmage. The team went 6-3.

Even though trips were limited, Glover said the league only shut down for 12 days of practice or local games because of the pandemic. Glover, also the president of KHL, said about 165 youths registered for the season.

KHL’s 16U squad went 1-3 in the 16U A Alaska State Hockey Tournament that completed last weekend in the Mat-Su Valley.

KHL’s 14U team reached the 14U B Alaska State Hockey Tournament semifinals. The tournament finished last weekend in the Mat-Su Valley.

The school board met Saturday and decided next steps after voting unanimously last week to suspend the search for a permanent replacement for Karen Gaborik, who is retiring from the district on July 1 after 26 years.