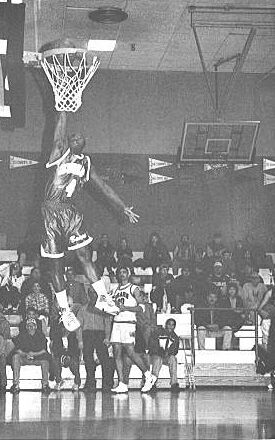 Kodiak's Terry Johnson goes up for a layup during his brief two-year varsity Kodiak basketball career. 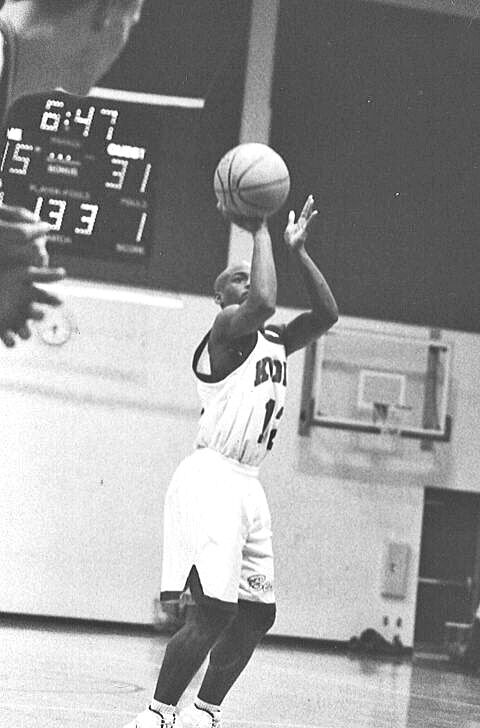 Kodiak's Terry Johnson goes up for a layup during his brief two-year varsity Kodiak basketball career.

Days before I took to social media to track down Terry Johnson, he sat in his home in Memphis, Tennessee, thinking about his most significant moment on the hardwood — a winter day in 1996 when he erupted for 52 points to lead Kodiak past rival Wasilla, 80-72 in overtime.

Throughout my years on the island, I had heard about Johnson’s herculean hardwood heroics. Like any good story, the legend grew over time. I’ve heard that the 5-foot-5 point guard, who could leap over defenders and rumored to have outdunked NBA star Carlos Boozer in a dunk contest, broke Rob Foster’s school record of 61 points. I’ve heard Johnson sprung for double nickels. Heck, the Kodiak Daily Mirror even misreported his point total from that game. The Mirror only had him scoring 48 points.

It was finally time to set the record straight, and who better to do that than Johnson. He doesn’t go by Terry Johnson on his Facebook page, so it took a few hours and the help of crowdsourcing to find him. He woke up Monday morning to a zillion notifications on his phone, and later that day, I spent 30 minutes talking to him about high school basketball (past and present), his time in the Army and his four kids.

“I was thinking about that game Saturday or Sunday, then it popped up (on Facebook),” said Johnson, now 41. “The actual thought was, ‘Man, it’s been over 20 years, and nobody has even talked about this. Then here you come.”

Johnson’s time in Kodiak was short, but impactful as his 52-point outburst is one of the greatest individual performances in a program rich with history. His Coast Guard family was stationed here for three years — Johnson’s freshman through junior seasons. New to the island, he landed on a Foster-coached C squad team his rookie campaign, then was elevated to a Jeff Jones-coached varsity team for his sophomore 1995-96 season.

Jones’ Kodiak tenure mirrored that of Johnson’s, lasting only two years. As Johnson said, Jones was a fiery coach who utilized a motion offense. The Bears didn’t lack for scorers under Jones, as his teams routinely lit up the scoreboard. Johnson, a point guard, benefited from that style of play and was a two-time all-Region III performer.

“Coach didn’t have to give me the green light. I was born with it,” joked Johnson.

On Jan. 13, 1996, at Wasilla High School nothing stopped Johnson — not even a stomach bug. Johnson buried eight 3-pointers — two in overtime — in racking up 52 points, a mere nine points shy of Kodiak’s all-time single-game scoring mark set in 1971 by Foster. Foster scored 59 of his 61 points in three quarters. He sat most of the fourth quarter of Kodiak’s 116-43 win over Homer.

The two scoring legends talked after the 1996 game. “He said, I almost got his record, but not quite,” Johnson said.

“In all my years of coaching, none of my players scored more in a game than Terry did that night,” Jones wrote on Facebook. “It was an OT game, so we needed every point.”

Johnson might have surpassed Foster’s mark if he wasn’t feeling ill. He said he came down with a stomach bug before the game. His illness seeped over into the school week.

“After the game, I just laid on the floor, and everybody was happy,” said Johnson, who noted he always played well in the Wasilla High gym. “I didn’t even go to school that Monday — you just hit 52 points, you want to run to school. It didn’t affect me during the game — I always thought that was weird. It ended up being the best game that I played.”

The Mirror reported that Johnson scored 48 points, but it was 52. Johnson said four free throws were credited to the wrong person and remembered, as he walked off the court, hearing the Wasilla public address announcer inform the crowd that Terry Johnson had scored 52 points.

“Terry was a fearless point guard!” teammate Greg Kreta wrote on the Kodiak Sports History Facebook page. “He was quick and could get to any spot on the floor he wanted. If his opponent was able to cut him off, he would just elevate right over them. I was playing right next to him and would be in awe of some of the things he would do on the court.”

Johnson played one more season in Kodiak, which resulted in the Bears’ first trip to the state tournament since 1986, before his family transferred to Mobile, Alabama.

He was the starting point guard for 6A W.P. Davidson High School his senior year. Johnson often wonders what his senior season in Kodiak would have looked like — the Bears’ 1997-98 team was led by first-year coach Amy Fogle, who later guided the Kodiak boys (2001) and girls (2014) to undefeated state championship seasons.

“He (Johnson) was so quick and could jump out the gym!” Fogle posted on Facebook. “I think he had a pretty nice jumper, also. I didn’t coach him but certainly enjoyed watching him play.”

As for beating Boozer — a graduate of Juneau High School — in a dunk contest. That never happened. But he did compete against him in the dunk contest at the Capital City Classic in Juneau his junior season. Boozer won, but it was Johnson’s pure athletic ability that stole the show.

“I was the shortest person out there, so I ended up getting a sportsmanship award,” Johnson said on participating next to Boozer.

Johnson said he never dunked during a game in Kodiak but did throw down his senior year in Alabama.

After high school, Johnson joined the Army. He spent six years in the military as a combat engineer, including a one-year tour in Iraq.

While in the Army, Johnson was in a vehicle accident that fractured his femur. He now has a metal rod in his leg. Then, at the age of 34, he had a heart attack. Despite those two setbacks, he has remained involved in the game, coaching his kids — three boys and one girl ranging from ages 4 to 13.

“I get out there and do little stuff, but I am nowhere near as athletic as I used to be,” Johnson said.

Johnson moved to Memphis — where his dad is from and where he learned to play basketball — in 2017. He is currently a maintenance worker. Even though his last trip to The Rock was in 2001, he still keeps in contact with his teammates through social media. He cherished his brief time playing in front of Kodiak’s passionate fans.

“I would really love for my kids to experience that,” he said. “I’m going to work on that … It’s a place that I want to come back to and settle down when it is all said and done.”

Artists, families brave winter for a day at the Fairbanks ice park

The project, named Super Soaker, was funded by NASA with the aim to see how water vapor from rockets affects Earth’s upper atmosphere.

Golden Heart Performing Arts hosted four performances of its Winter Solstice Soirée this weekend, with 20 performers and their movements telling the story of solstice and the importance of Yule during the darkness