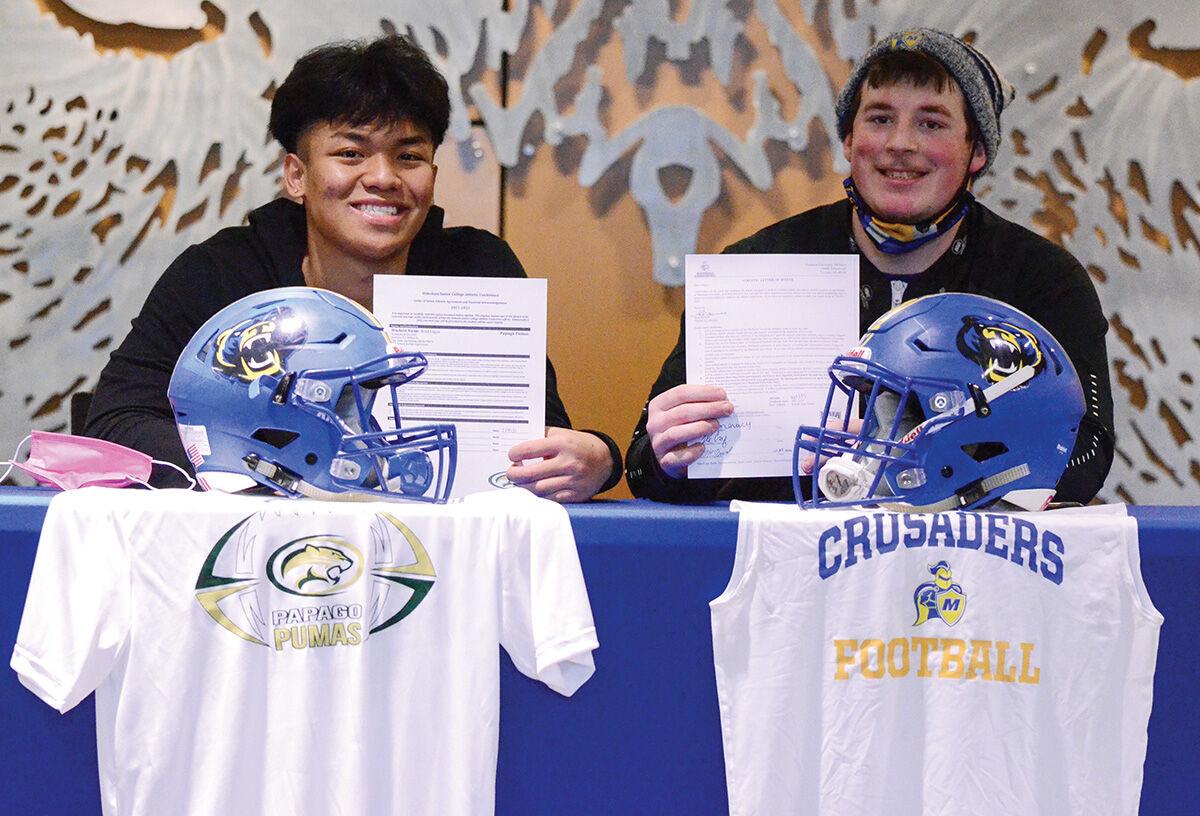 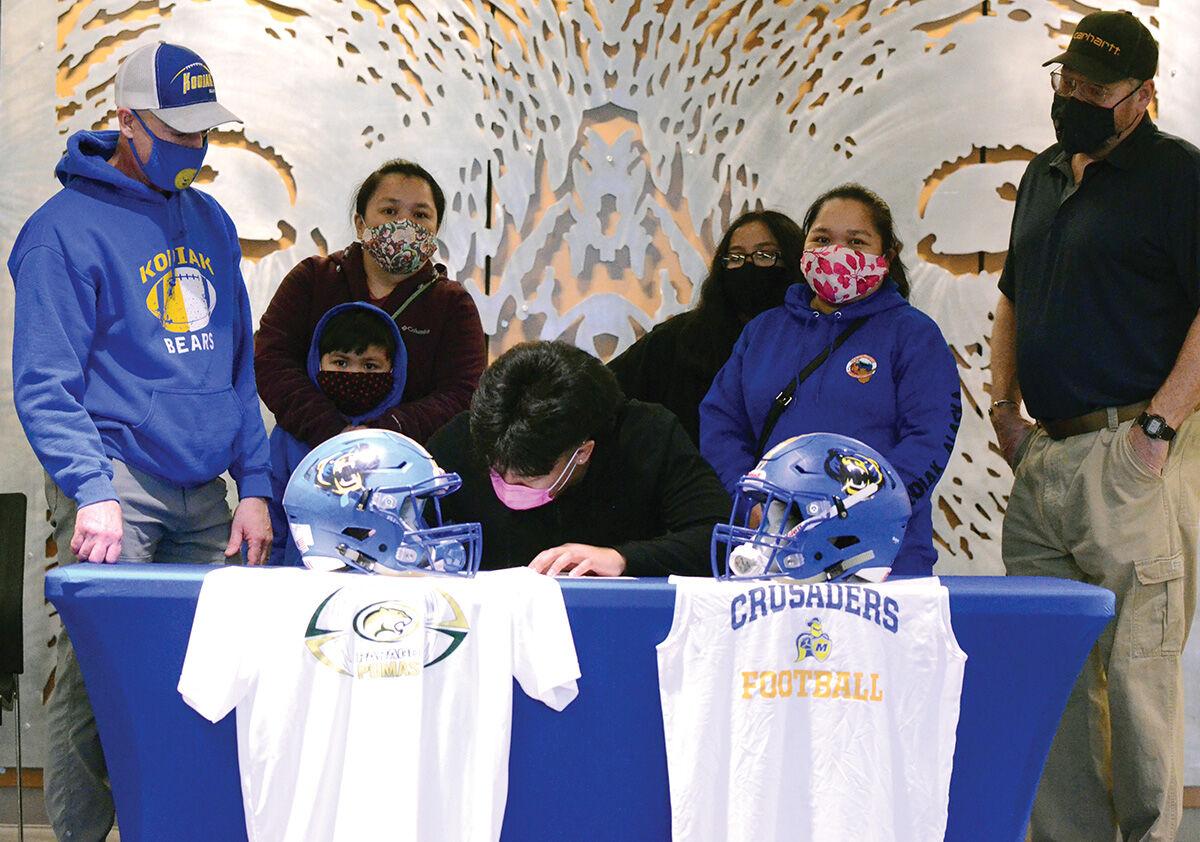 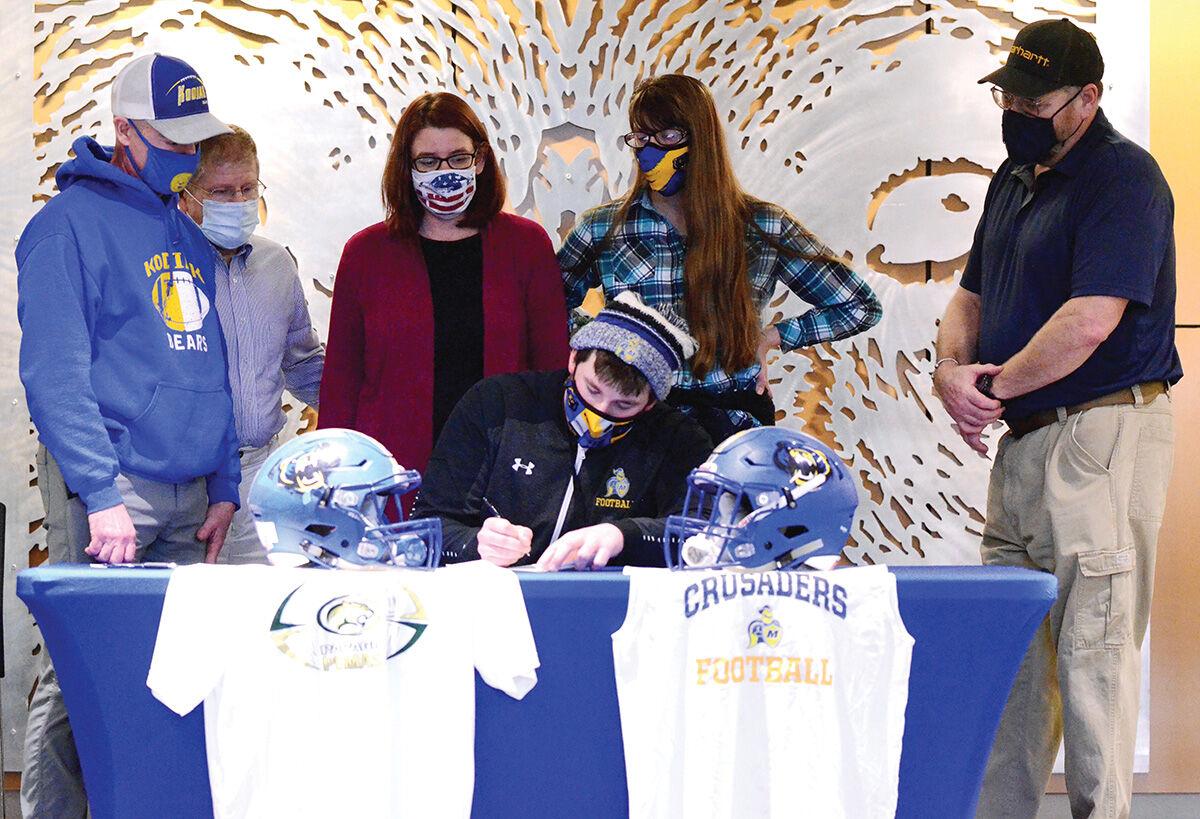 Kodiak High School senior Gideon Craig signs a National Letter of Intent to play football at Madonna University next fall. His family and coaches look on.

Kodiak High School senior Gideon Craig signs a National Letter of Intent to play football at Madonna University next fall. His family and coaches look on.

With Kodiak High’s 2020 football season erased because of the pandemic, seniors Brad Lagus and Gideon Craig both thought they had played the last downs of their careers during their junior seasons.

They have both been awarded a second chance.

In a ceremony at Kodiak High School on Feb. 4, Lagus and Craig signed National Letter of Intents to play college football next fall.

Lagus signed with Papago Junior College in Arizona and Craig with Madonna University in Michigan.

“Being a former college athlete myself, this is no small thing,” Kodiak High football coach Bryan Ellsworth told the small gathering of people at the ceremony. “Playing at the next level is different and exciting, plus you get to do that while getting a degree ... I’m really, really proud of you guys for this accomplishment and honored to be here with you to witness this and be here for you.”

Lagus was a late-bloomer to the gridiron, waiting until his eighth-grade year to strap on the pads. He then stepped away from the sport for a year before joining the high school team as a sophomore.

“Football wasn’t my first love. I just needed to do a sport, and I thought football was the best fit for me,” Lagus said.

Through football, the 6-foot Lagus has shed close to 40 pounds, checking in at 206 pounds. His mix of speed and athleticism generated punishing hits from his linebacker position.

“I just love the contact and the adrenaline rush when you hit someone,” he said. “When you have the ball, it is just a different experience than any other sport because people are chasing you trying to hit you.”

Lagus started targeting colleges in November, sending out emails and making phone calls to coaches. He did most of the groundwork himself. He picked Papago out of three interested colleges because he liked the junior college aspect.

“I learned that you are your biggest recruiter,” Lagus said.

The Papago Pumas play in the five-team Hohokam Junior College Athletic Conference in Arizona. The conference was formed in 2019 and features teams located in Maricopa County. Puma is in Mesa.

Lagus will transition from linebacker to safety in college. He said he is looking forward to building relationships and improving as a player.

“I look at football as a way to pay for school — I get to play football and go to school at the same time,” he said. “It’s always been a dream of mine to play Division I football, and I just think this is another stepping stone for me to go Division I.”

Ellsworth said Lagus has untapped potential and should shine at Papago.

“All the tools are there,” he said. “We didn’t really get to see it come out this year for obvious reasons. I think he was starting to really sell out and was the most disappointed player on the entire team at the end of the blue/gold game ... he was very upset because he wanted to showcase what he had worked on.”

Lagus said the 2020 high school season made him realize that not everything is promised in life. Kodiak players practiced for months in hopes of playing a game before the season was officially canceled. The season ended with an intrasquad blue/gold game.

“You just have to treat everything like it is your last,” he said. “Had I known that my junior year, I would have tried harder.”

Lagus will be studying early education at Papago and would like to pursue a psychology degree at a four-year university.

When Kodiak High started practicing in July for the 2020 season, playing in college wasn’t something that had entered Craig’s mind.

That changed as the season went on and the odds of playing a game lowered.

He was also nudged by former Kodiak standout lineman Kordell Pillans, a senior on the University of Montana football team, to pursue college.

Pillans walked him through the process of how to get recruited.

“Right off the bat, I got an offer for a junior college in Arizona,” Craig said.

He continued looking. That is when Madonna University came calling.

“Out of nowhere, this coach follows me on Twitter. I didn’t think a lot of it — then somehow I got a message. He got my number. We started talking and hit it off. He liked my transcript and loved my grades. That is what drove in the nail,” Craig said.

Madonna, located in Livonia, Michigan, just started its first season of NAIA football. Craig will join the team in Year 2 as a 6-foot-4, 290-pound defensive tackle. Madonna signed 51 recruits from eight different states for the 2021 class. Craig is the only recruit from Alaska.

Craig said he liked the idea of joining a new program.

“One of our goals was to find guys who want to be here,” interim head coach Herb Haygood told mucrusaders.com. “We are super excited to have guys from all over the country that want to be a part of what we are doing here at Madonna.”

A hockey player growing up, Craig started playing football in the sixth grade when his family relocated to Kodiak from Glennallen.

“He (Schneider) is a really good coach, and if it weren’t for him, I wouldn’t be here at this point. My determination got here, too. But his coaching to develop my ability has really helped,” Craig said.

Ellsworth said Craig’s most prominent attributes are his ability to listen and desire to improve. Both those things will carry him through college and potentially land him a job as an Alaska State Trooper.

“Gideon wants to get better. That is what makes him a good player,” Ellsworth told the Daily Mirror in August. “He has abilities — he doesn’t have five-star abilities — but he has coachability. People talk about intangibles, and I think that is tangible. He is willing to listen to what is being said and fixes it.”

Artists, families brave winter for a day at the Fairbanks ice park

The project, named Super Soaker, was funded by NASA with the aim to see how water vapor from rockets affects Earth’s upper atmosphere.

Golden Heart Performing Arts hosted four performances of its Winter Solstice Soirée this weekend, with 20 performers and their movements telling the story of solstice and the importance of Yule during the darkness