Kodiak’s Andrea Kouremetis (second to right) competes in the 200-meter run at the 1985 state meet in Chugiak. Kouremetis’ sister, Michelle, is to the left while Bartlett’s Cythia Morgan is to the right. 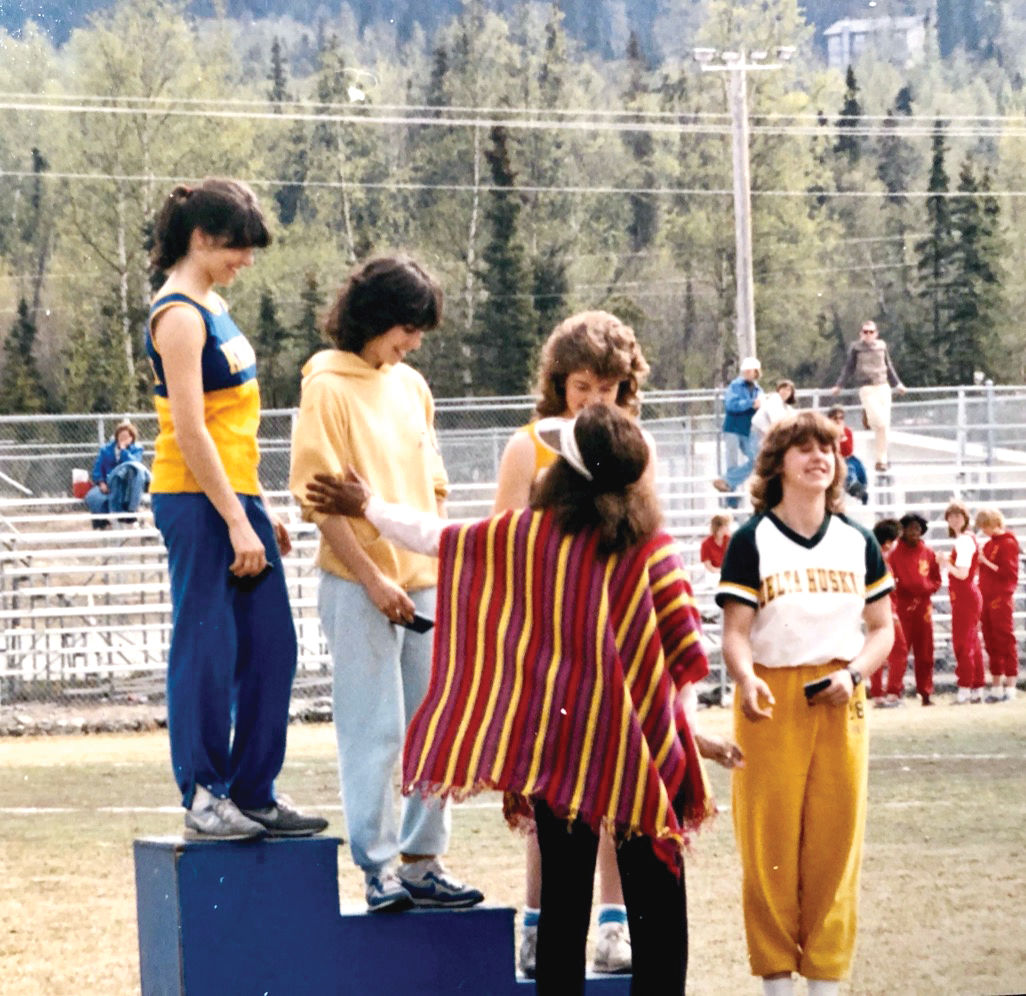 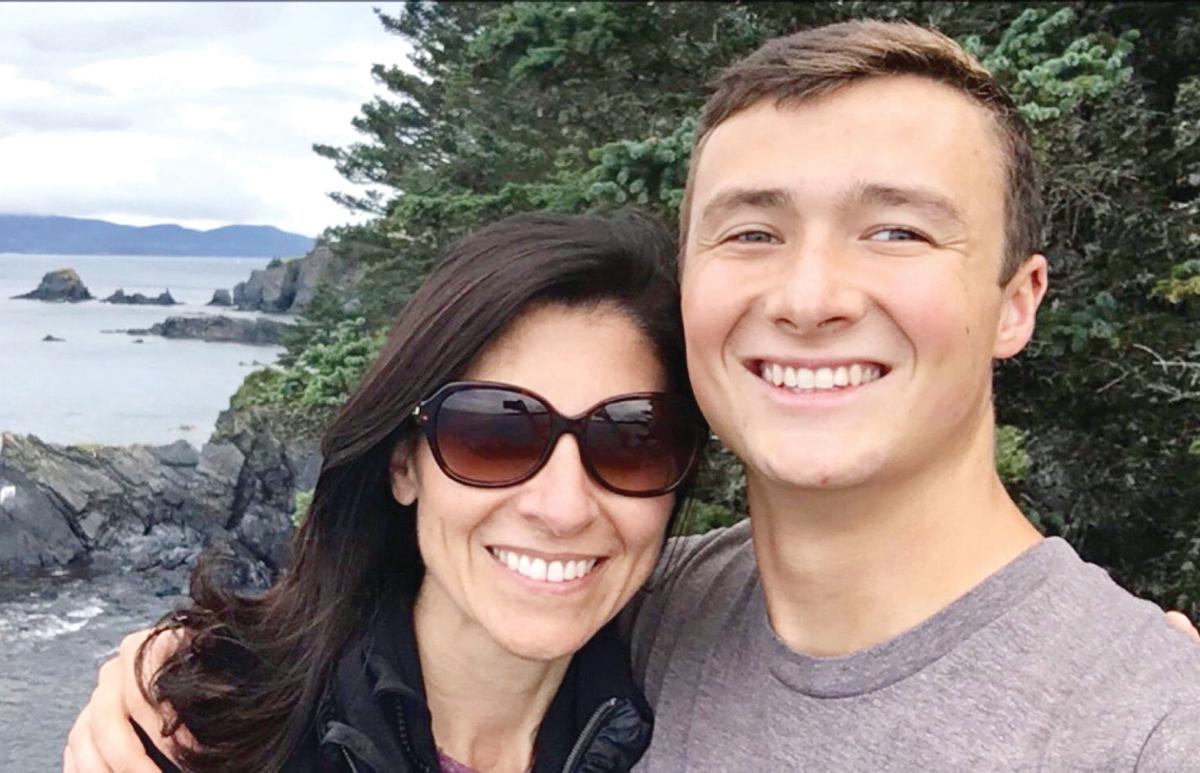 Kodiak’s Andrea Kouremetis (second to right) competes in the 200-meter run at the 1985 state meet in Chugiak. Kouremetis’ sister, Michelle, is to the left while Bartlett’s Cythia Morgan is to the right.

Who is the only athlete in the history of the Kodiak High School track and field program to appear four times — not counting the pentathlon record — on the school’s record board?

Here is a hint: This athlete won four gold medals at the 1985 state meet and later became an All-American at University of California San Diego.

Still can’t figure it out. OK. Here is another hint: This individual dominated Crab Festival races back when the spit was dirt and not pavement.

Congratulations on those who passed the quiz. For those who did not, it’s time to read the chapter of Andrea Kouremetis — now Barraugh — in the Kodiak Sports History textbook.

In 1985, Barraugh — then Kouremetis — authored one of the finest individual seasons in the history of the Kodiak girls’ track and field program. The speedy sophomore sprinter was a quadruple winner at the state meet and finished the year as the school record-holder in the 100- and 200-meter runs, and the 400 and 800 relays. All those marks still stand.

“The records were more about the spirit of the community and the energy of the coaches than it was in any particular talent,” said Barraugh Tuesday morning from her home in San Diego.

Don’t get fooled, Barraugh was drenched in talent that was formed at an early age and fine-tuned by coaches, a star older sister (Michelle) and an ultra-competitive dad (Leo).

“I used to win the Crab Festival races, which were co-ed,” Barraugh said. “Those were probably the early signs that I wanted to be a sprinter.”

After strengthening her legs and lungs with elementary and middle school races, Barraugh entered high school ready to dominate — and she certainly did as a sophomore.

Nobody in Kodiak history has turned a faster 100 (12.6) and 200 (26.1) or been on a quicker 400 or 800 relay (51.6 and 1:48.4, respectively) than Barraugh. Her individual records were set during regular-season meets, while the relay records were obtained at the state meet in Chugiak with teammates Michelle, Tonya (Brockman) Lee and Terri Wheeler.

That quartet helped land Kodiak a runner-up finish behind Bartlett. The silver medal was the Bears’ best finish at a state meet.

“It was an exciting day,” Barraugh said. “It was one of those things that you don’t realize when it is happening — it was all business and one race at a time.”

Barraugh’s memory is foggy on the details of the individual races but said the conditions were perfect — overcast skies and 50 degrees. She went in expecting to win and fended off challenges by sister Michelle — a senior — and Bartlett hotshot Cynthia Morgan. Michelle finished second in the 200, a mere .10 seconds back. That was the last time the Kouremetis sisters raced each other.

“We trained together and challenged each other,” Barraugh said. “We performed well because we were on the same team.”

Recently, Barraugh watched a video of the team’s 800 relay victory. The video was shared with her by former Kodiak coaching great Marcus Dunbar.

“It was fun to watch; otherwise, I wouldn’t have any recollection of what went on besides winning it,” she said.

Michelle and Andrea bookend the relay, while Brockman and Wheeler ran the middle legs. Barraugh said Brockman was “super fast and super jumpy” and nearly dropped the baton on the handoff because of a quick start.

“That was probably the last race of the four that I was in that day,” Barraugh said. “It was really exciting to cross the line and realize what we had accomplished.”

Barraugh never duplicated that state performance, but she did cement herself as the greatest girls sprinter in school history when she graduated in 1987.

Because of Kodiak’s gravel track and was not suitable to host meets, she never raced on The Rock as all her meets were off-island.

“It is impressive what she did with those times, and we have had so many good runners in the past and they have come nowhere near what she has done,” Dunbar said. “When she was running, they didn’t have the nice track that we have now.”

Peter VanRossen — the school’s swimming coach — headed the track team in 1985, while he was assisted by Larry Olsen, Chris Provost and the husband-wife duo of Tricia and George Griffing.

Barraugh remembers George Griffing was excited about the potential of relay state titles that he was persistent in teaching the ladies how to escape getting boxed in during a race.

“Every single practice he would make people gather around us and box us in,” Barraugh said. “We would practice shoving our arms through and getting out of being boxed in.”

Barraugh turned down chances to reunite with her sister at University of California Santa Barbara and at Boston College to run at then-NCAA Division III UC San Diego, which, at the time, had a dirt track. Barraugh said after she arrived, the San Diego Chargers replaced the school’s dirt track with a state-of-the-art facility.

“I was very naive coming out of Kodiak. I didn’t know anything about the game, and I remember calling the (track) coach once I got into the school and asking about a scholarship,” Barraugh said. “He said, ‘You just come on down, and we will talk about it.’ I got down there and came to find out that was a lie when they don’t give scholarships, and they don’t even have a track.”

“He was able to layer in the sorts of expertise, where Kodiak made up for it with the coaching with heart and grit,” Barraugh said. “This guy was able to teach me the technical and tactical aspects of running — there was a strategy for every single component of the race.”

A torn hamstring ended Barraugh’s college career after 2 1/2 seasons. Years later, she returned to the school and ended up teaching the athlete who shattered her 200 record in 2004.

Barraugh — a mother of two — now owns a consulting company that works with school districts across the nation on changing math instruction.

She still runs, but instead of sprints, she has transitioned to half-marathons. Her fastest time is 1:45.

In every race, she is reminded of her time in Kodiak and what it was like to run for a community that supported its athletes. Barraugh’s mom was on the island when Joe Floyd arrived in town and watched as he built a sports empire. Hearing stories about Floyd influenced how Barraugh valued sports.

“That feeling of being part of the history of something special in Kodiak has always carried me,” she said.

The deadline to apply for the relief was June 30. If the House and President Donald Trump approve the Senate bill, the program will be extended to Aug. 8.