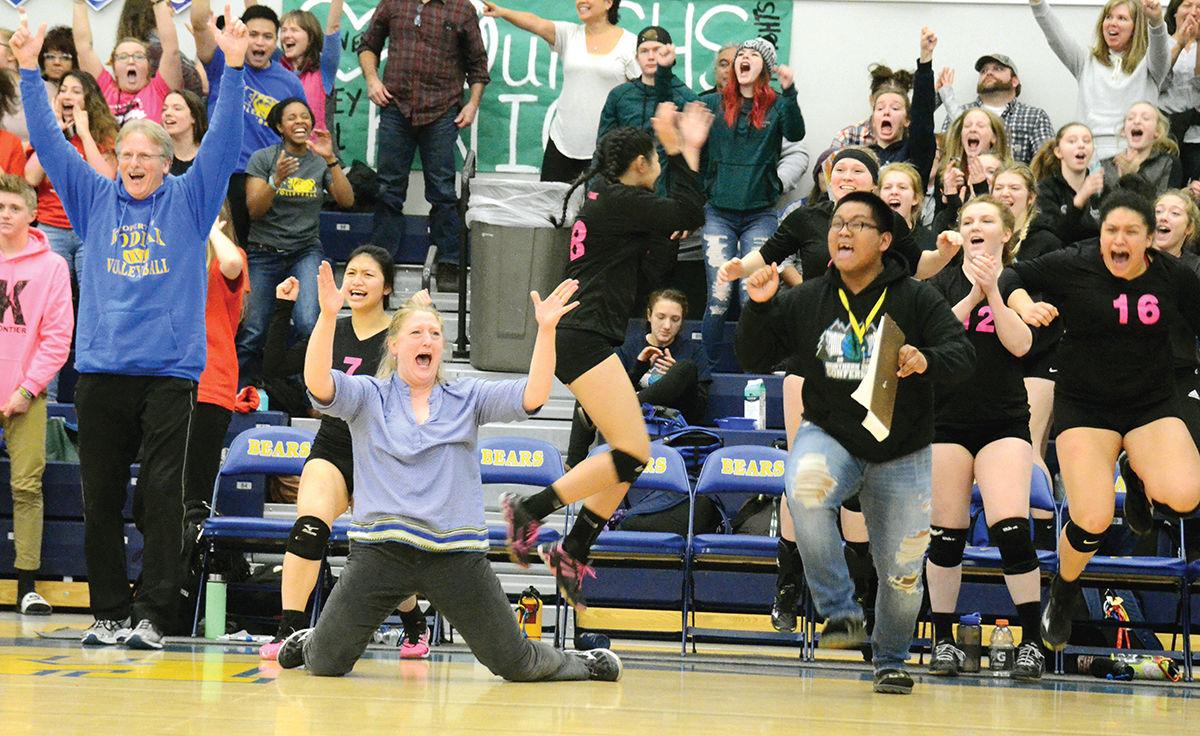 Kodiak volleyball coach Amy Willis reacts after the Bears forced a fifth set against Soldotna in an elimination match of the Northern Lights Conference Championships in November 2017 at Kodiak High School. 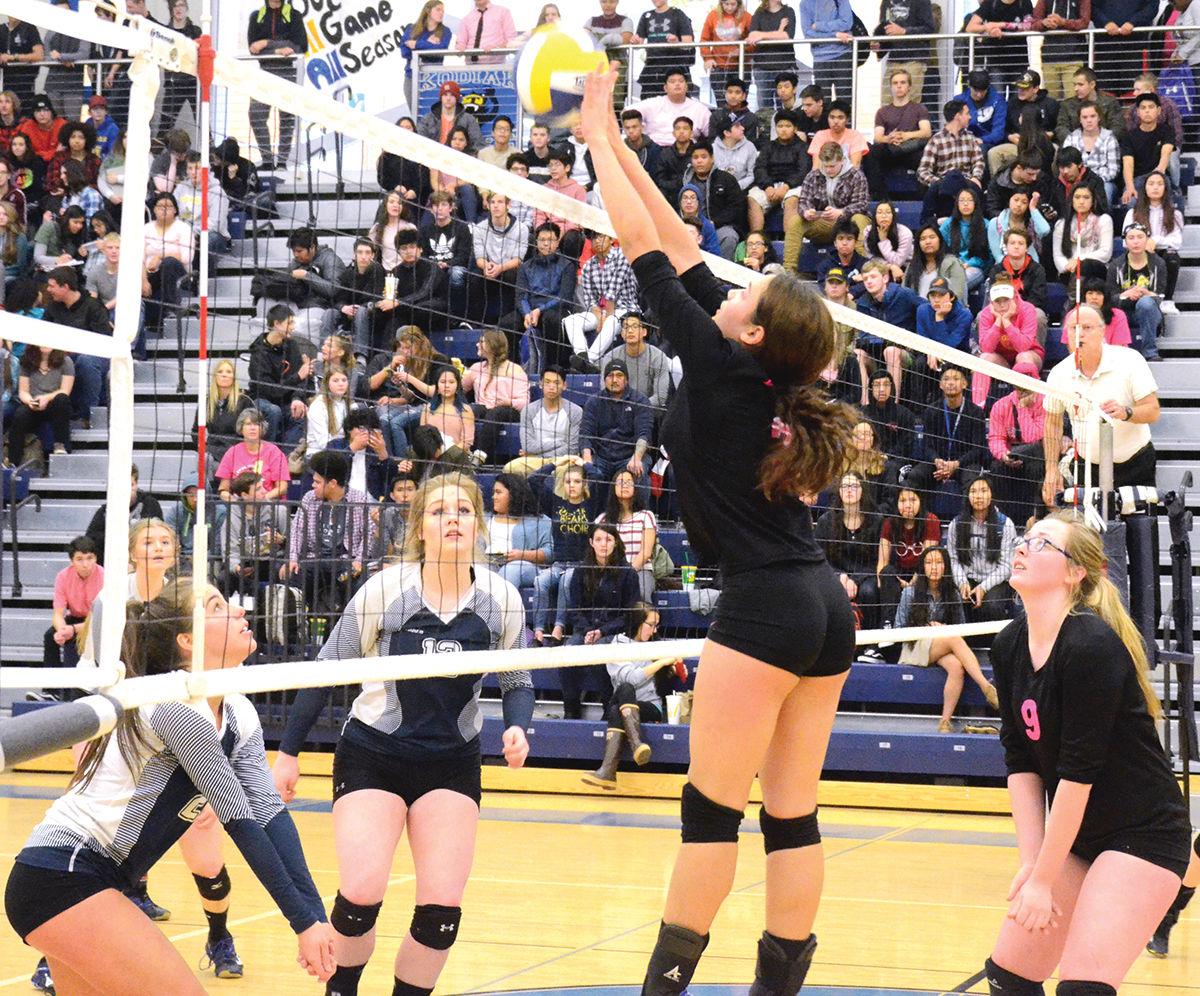 Kodiak’s Hallee Blair goes up for a block during a volleyball match against Soldotna at the Northern Lights Conference Championships Friday at Kodiak High School.

Kodiak volleyball coach Amy Willis reacts after the Bears forced a fifth set against Soldotna in an elimination match of the Northern Lights Conference Championships in November 2017 at Kodiak High School.

Kodiak’s Hallee Blair goes up for a block during a volleyball match against Soldotna at the Northern Lights Conference Championships Friday at Kodiak High School.

Kodiak’s volleyball season was a roller-coaster ride, filled with ups and downs and swaying emotions.

The Bears’ elimination match against Soldotna on Friday at the Northern Lights Conference Championships was a microcosm of their year, featuring heartbreak and excitement.

The excitement: Kodiak rallied from a 2-0 deficit to force a fifth-set tiebreaker.

The defeat closed Kodiak’s season with a 3-9 record and a fifth-place showing at the regional tournament.

However, everybody on the Bears’ side knew they were only a few points away from a podium finish and a trip to the state tournament.

The Bears fell in five sets to Palmer in Thursday’s opening-round match, while Soldotna made it all the way to the championship game where it lost to Colony in five. Wasilla finished third to clinch the final berth to the state tournament.

“It was such a powerful testament to what could have happened without injury and illness and some of the things that we went through this year,” Kodiak coach Amy Willis said. “We just were not able to provide a lot of opportunity to have the girls performing their role ... if they can come out and play like they did Thursday and Friday it makes us a little wistful, a little sad about what could have been if we were able to have a season of that.”

Willis did everything she could to extend her team’s season. She was the ultimate cheerleader, leading her team from a 2-0 deficit with emotion that few coaches display. She dropped to her knees and extended both arms into the air when Kodiak polished off a thrilling fourth set to force the 15-point fifth set.

“You cannot have a good time when your team is playing to their potential in front of 400 of their greatest fans,” she said.

In Thursday’s fifth set against Palmer, Kodiak was tentative and made the safe play. That wasn’t the case in Friday’s deciding set.

Three kills — two from Ruth Dela Cruz and another from Kathryn Carstens — put Kodiak up 3-1.

Soldotna then used a 5-0 run to jump in front 6-3. Kodiak stayed close and tied it at 9 on a Hallee Blair kill and a Madelaine Egdorf service ace.

The Stars then silenced the upset-thirsty crowd with a 6-0 run that closed out the match — the Bears gave away four points with either hitting errors or balls that sailed deep.

Kodiak went the entire season without playing a five-set match and played two in back-to-back days. Willis said it was a new situation for her team.

“I think if that set had been to 25, we probably could have rallied,” she said.

Soldotna coach Shelia Kupferschmid gave Kodiak credit for pushing her team to the limit after it appeared a sweep was imminent.

“They had their atmosphere and they had their home court, but they are a very good defensive team ... they are one of the scrappiest teams I have seen,” Kupferschmid said. “Amy does a great job with them.”

Tied at 20 in set three, Kodiak finished on a 5-1 run to extend the match.

Soldotna led the fourth set 23-21, but a hitting error and a Dela Cruz kill tied it at 23.

Kodiak grabbed the lead on a Soldotna error and won it on a Blair ace that peppered the back left corner and triggered a volcanic eruption on the Bears’ sideline.

A former state-licensed foster care provider charged last week with two counts of sexual assault was indicted Friday on 16 additional counts for incidents dating back to 1996.

According to the Park Service, a Robinson R44 helicopter took off from the Sheldon Chalet with two guests and one pilot at around 3 p.m. but crashed near the chalet shortly thereafter.

“Through discussions with other elected Republicans in the House, Mr. Prax demonstrated to members that he is the right fit to represent his district,” said Rep. Lance Pruitt, leader of the House Republican Caucus.