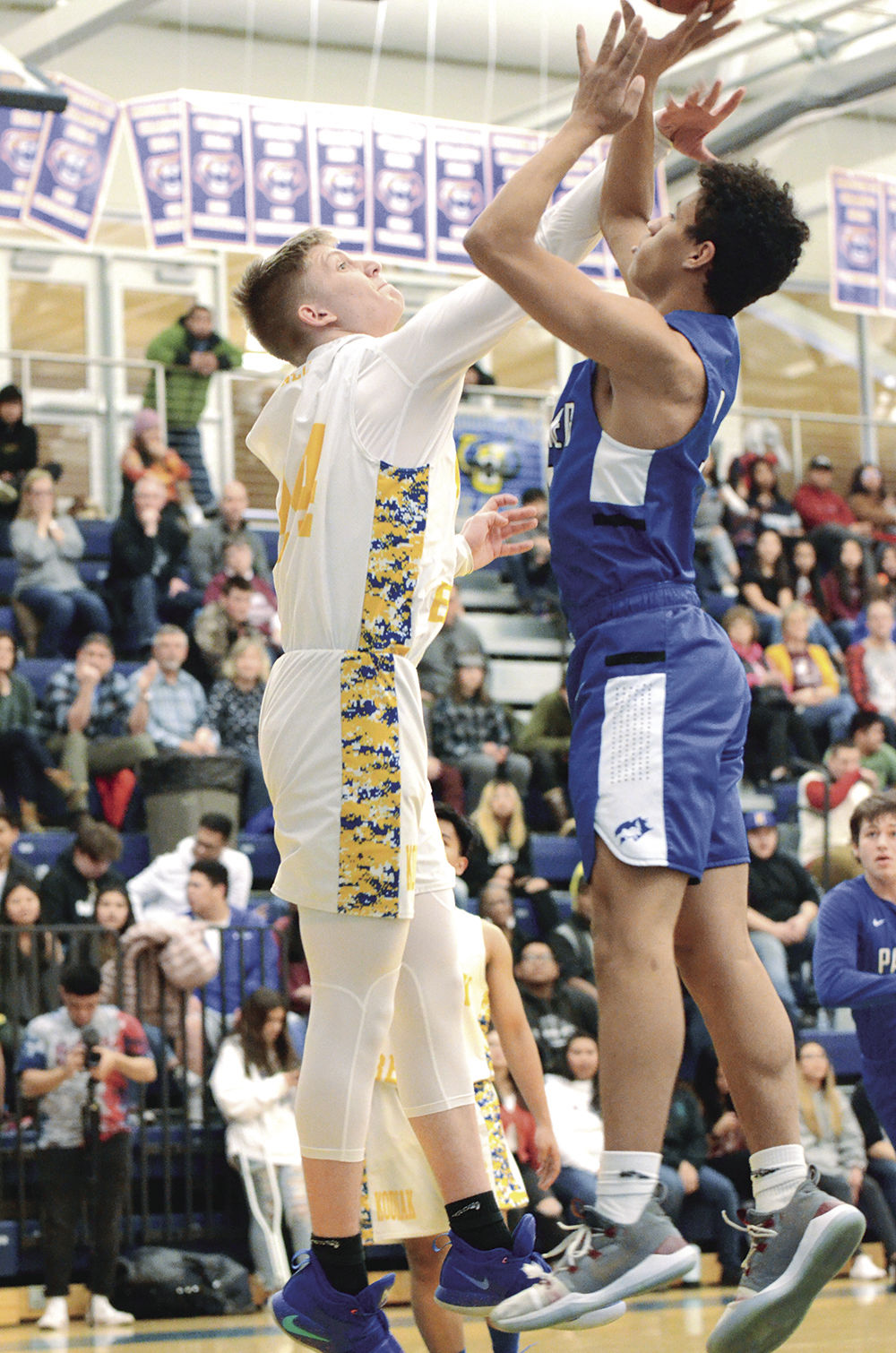 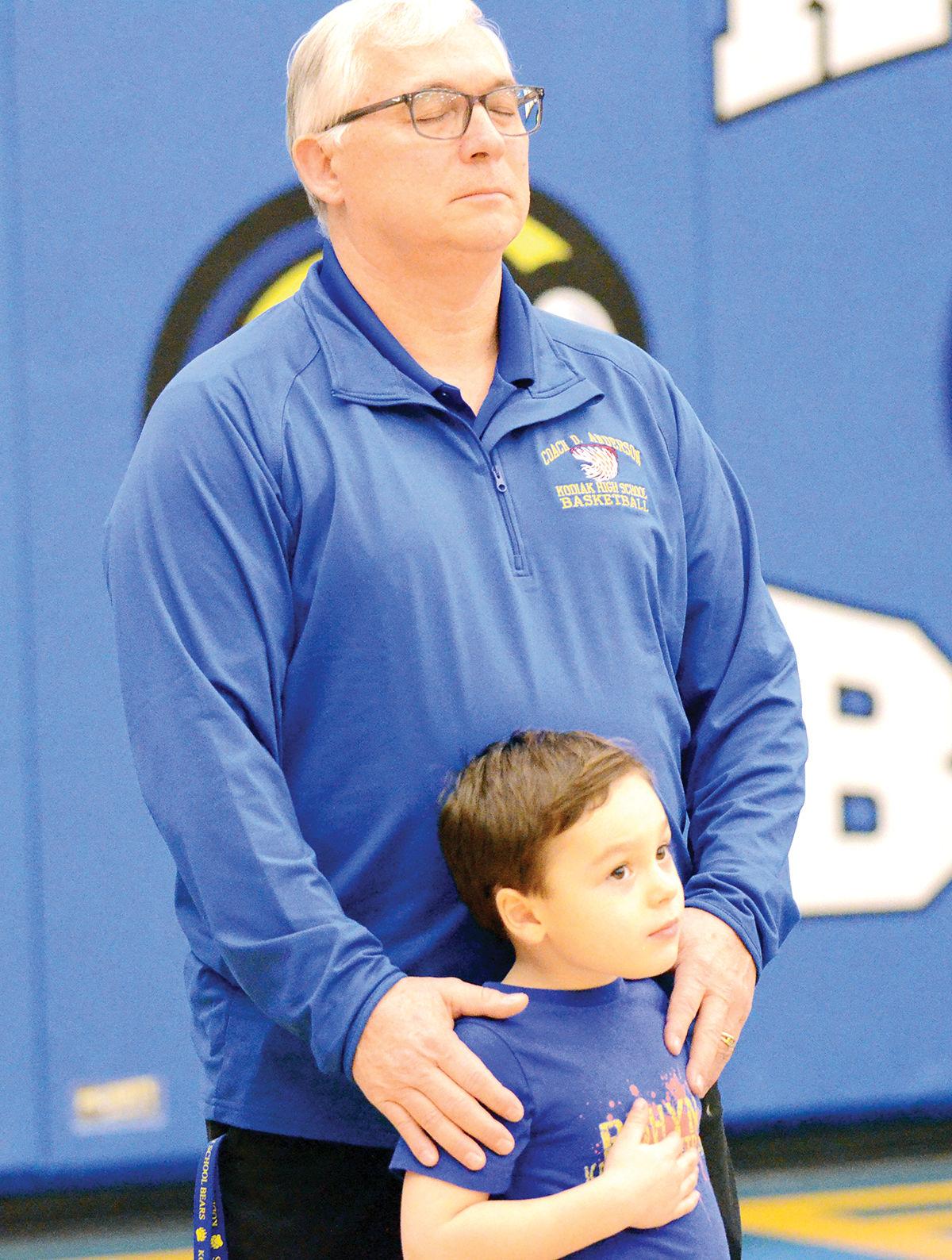 Kodiak coach David Anderson stands with his grandson during the moment of silence for Joe Floyd at the beginning of a high school basketball game against Palmer Saturday at Kodiak High School.

Kodiak coach David Anderson stands with his grandson during the moment of silence for Joe Floyd at the beginning of a high school basketball game against Palmer Saturday at Kodiak High School.

Hours before the game, news spread across The Rock that Joe Floyd — the man who built the sports empire at Kodiak High School — died in his sleep in his home in Kodiak Saturday morning. He was 89.

Floyd — known as “Coach” — was honored with 30 seconds of silence before the opening tip-off.

“He just about did everything in this community. I think that is why I am where I am today,” longtime Kodiak boys coach David Anderson said. “He was very instrumental in my life and was like a second father … just a great person.”

Floyd and his newly-married wife, Carolyn, arrived in Kodiak in 1955. Floyd, a 25-year-old from the delta farmland of northwest Mississippi, was hired as a teacher and was handed the boys basketball team.

During his 26-year career, Floyd was responsible for creating and coaching most of the sports that are currently offered at the high school. He was inducted into the Alaska Wrestling Hall of Fame in 1992 and the Alaska High School Hall of Fame in 2007. More importantly, he shaped thousands of lives with his passion for youth sports.

Anderson, who teared up during the post-game interview, was glad his team held on for a 46-36 victory, a day after the Bears won 37-32.

“Throughout the game, you want to win it for the family,” he said. “It is always tough when you lose somebody like that, of that importance to the community … he was a very good role model for a lot of people.”

Anderson chose not to tell his players about Floyd’s passing before the game; they found out when public address announcer Malcolm Bennett announced it to the crowd. Sophomore Jackson Krug mouthed the word “wow” when he heard the news for the first time.

“It was really sad,” said Krug, who punctuated a career-high 15 points with a dunk in the final seconds of Saturday’s game.

Clifford Anderson — David’s younger brother and an assistant coach for the Kodiak boys — said it was difficult to contain his emotions during the game. Clifford Anderson played American Legion Baseball for Floyd in the 1980s. He called him a “father figure for sports.”

“He gave us the opportunity to play sports, especially during the summertime. He would take the time and take us out to the ballfields at 6 o’clock in the morning.”

Clifford Anderson was drafted by the Los Angeles Dodgers and reached Triple AAA — the furthest any baseball player from Kodiak has made it — before injuries ended his career.

“Given the chance, the hope and the inspiration that he gave me all the time — there was nobody better for me,” Clifford Anderson said.

It was fitting that Kodiak put together its best two performances of the season to remain in the hunt for a high seed at the NLC Championships. The Bears finished conference play with a 3-5 record and will now wait and see where that puts them in the final standings.

“These guys played well the last couple of nights,” David Anderson said. “They listened to what we are doing. We threw a lot of stuff at them this week to adjust to what Palmer did to us earlier this season ... and the adjustments we made were beneficial to us.”

Kodiak was able to avenge a pair of early-season nonleague losses to Palmer when it mattered the most.

“We picked up the intensity and had our bench going,” Krug said. “We also had a new defense, which helped a lot.”

Krug, a 6-foot-5 center, had a breakout weekend.

In Friday’s game, he scored seven of his nine points during a three-minute span in the fourth quarter that put Kodiak ahead for good at 35-32. Krug backed that up with 15 points in Saturday’s game, which tied a career-high that he set earlier this season against West Valley.

“He is a gifted athlete that will do well in the next couple of years,” David Anderson said. “The swimming legs are done now, and he has the basketball legs underneath him.

“At the beginning of the season, he could barely touch the rim; now he is starting to get it up there. To finish that game out with a dunk was huge.”

With time running down in Saturday’s game, Krug broke away for a one-handed flush to become the first Kodiak player to dunk in a game since Jesse Swearingin in 2012.

“It is exciting to get my first dunk. I have been waiting for it the whole season,” said Krug, a state-qualifying swimmer. “It takes a while to get back into basketball, but when you peak, it just feels like you are jumping out of the gym.”

Both games were tightly contested and had a playoff-type intensity.

Up by two at halftime of Friday’s game, Palmer pushed the lead to nine midway through the third quarter.

Kodiak, backed by the play of senior Sam Galindo and Krug, ended the game on a 20-6 run.

Galindo scored 13 of his game-high 16 points in the second half. He hit all three of his 3-pointers during the decisive run.

Kodiak led Saturday’s game by six points at halftime. The lead ballooned to double figures in the third quarter.

The Moose only closed the gap to eight points in a fourth quarter that had 21 free-throw attempts.

“The bottom four in our region is extremely tough. It is well balanced ... and to win with these sophomores says a lot about their character and their understanding of the game,” David Anderson said.

The borough announced on its website Friday that it is waiving some foreclosure fees and suspending filing for tax deeds, a step in the foreclosure process, this year.

Alaska Revenue Commissioner Lucinda Mahoney explained how the department took into account some of the lower expectations to craft a forecast that accounts for what can only be explained as a mounting statewide economic crisis.

Alaska Airlines gears up in response to Ravn suspension of service

“With the announcement on Sunday of RavnAir Alaska stopping all operations, Alaska Airlines expressed deep concern for the Ravn employees and communities in the state impacted by the news."