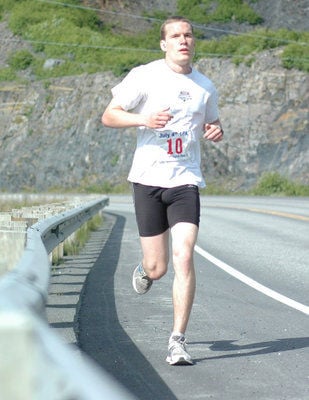 Sam Salus has had his share of runner-up finishes in Kodiak’s Fourth of July 10-kilometer Fun Run.

On Monday, he finally claimed his first title.

The former Kodiak star and current University of Idaho runner captured the men’s title with a sizzling time of 35 minutes, 31 seconds, well ahead of runner-up finisher Cole Christiansen, who finished in 37:29.

Sarah Rohrer won the women’s title with a time of 44:59, nearly five minutes ahead of second-place finisher Renae Bedingfield.

Last year, Salus was out-kicked by Dylan Anthony near the end of the race to finish second, and in 2009 Salus was second to Miles Dunbar.

This year, he didn’t have to contend with Anthony, who wasn’t in the field of 35 runners.

Salus, though, was looking forward to the potential rematch.

“ I was really hoping to race against Dylan because he and I are rivals,” Salus said. “I could have had Dylan there to pace me, or beat me again.”

Salus, who was a member of three state-winning Kodiak cross country teams, is entering his junior season for the Vandals.

He has enjoyed his time in Moscow.

“It’s a great experience,” Salus said. “In Alaska we only run on one terrain, but back in Idaho we go to dry climate to wet climate. It’s a little bit of everything.

“I have a bunch of group of guys who whip me in shape and for me to push more. I think that has been my overall success of being there.”

Last season, he finished 35th at the Western Athletic Conference (WAC) Championships and 163rd at the NCAA West Region Championships. He ended the season as the Idaho’s No. 6 runner.

“These guys make my race pace look like nothing,” he said. “It has taught me that I have a ways to go in order to make myself known.”

This season, he is looking to crack the top five.

“I’m going to run with them and hopefully make my way up the ladder,” he said. “I’m really hoping to stick with the team this year because the WAC championships are in Hawaii and I really want to go there.”

Salus redshirted the track season to concentrate on his mechanical engineering degree.

Rorher was surprised she took first, especially since she wasn’t even sure if she was going to run.

“(My husband and I) were thinking about it last night and we decided on it this morning,” she said.

Rohrer, who didn’t train for the race, said she was pleased with her time.

“The bright spot is your future fields and projects that are under evaluation. By 2030, if they all come in as advertised, we will still be doing closer to 500,000 barrels a day. That’s the good news.”

The runway’s original lighting system was installed back in the 1970s, according to Nenana Mayor Joshua Verhagan. In 2003, lighting was extended and upgraded to include a parking area and a ski strip.