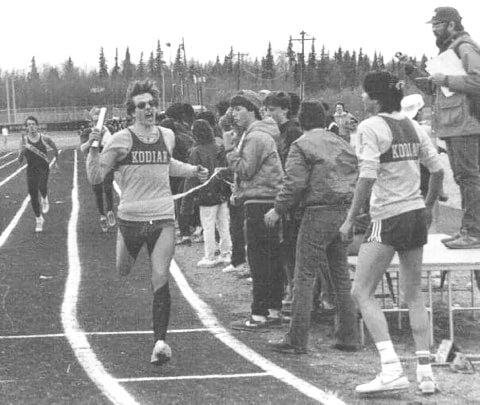 Kodiak’s Chip Fudala finishes the 1,600-meter relay during a track meet in 1986. 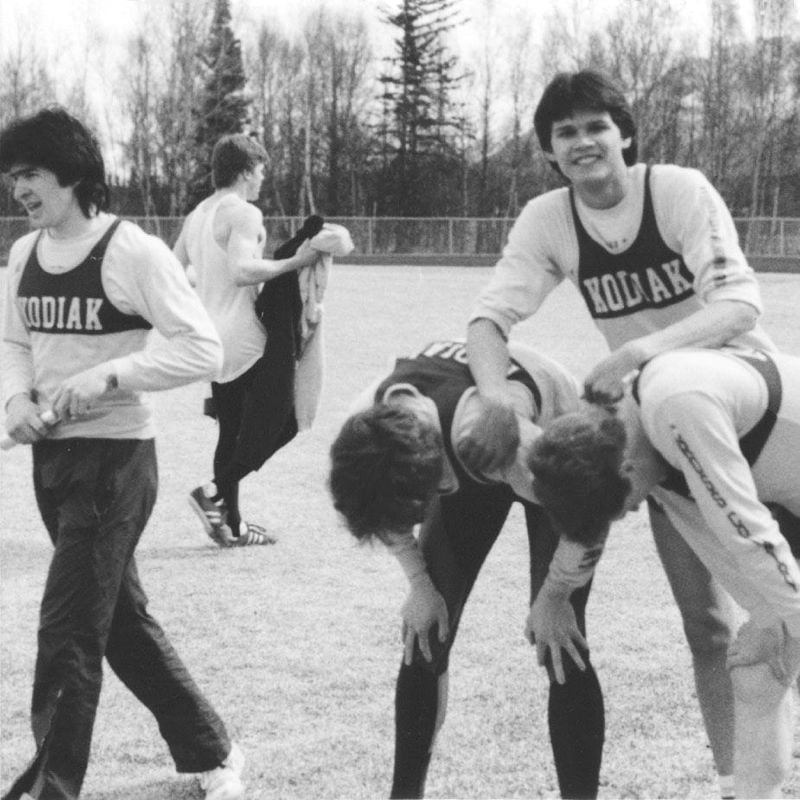 Kodiak’s Chip Fudala finishes the 1,600-meter relay during a track meet in 1986.

Digging through his storage shed a week ago, John Cannon found a piece of Kodiak High School sports history while sifting through a box — the baton from the school’s record-setting boys’ 1,600 relay team.

The gold shine of the baton is still visible through the scratches from being transferred from palm to palm, while the names of the four members of the team — Morgan Howard, Jon Halter, John Cannon and Chip Fudala — are engraved in the center of the tube.

Cannon grabbed the baton after the team’s historic 3-minute, 27.8-second race at the 1986 state meet in North Pole. That time remains a school record, one of four boys’ records that survived the Marcus Dunbar era — long jump, high jump and discus are the others.

“I made sure we kept the baton somehow for future reference, and I guess this is the future now,” said Cannon earlier this week.

Every spring, Howard and Halter correspond with Cannon — the only one of the four who remained on The Rock — to see if the record withstood another season. The ritual is comparable to when players from the 1972 undefeated Miami Dolphins celebrate when the final undefeated NFL team falls.

Cannon always sends back to his buddies a picture of the record board at Joe Floyd Track and Field.

“I’m just flabbergasted that it never got taken down,” Halter said.

Halter lives in North Carolina now, while Howard resides in Washington state. The whereabouts of Fudala are a mystery. Halter last talked to Fudala 12 years ago, while Howard said he might live in Anchorage but hasn’t spoken to him since high school.

The four are bonded in time.

“We were not a team full of pure-breed 400 runners,” Cannon recalled. “We were a hodge-podge team full of high jumpers and hurdle runners.”

The stage for the 1986 team was set the year before when coach Larry Olsen tossed together a 1,600 relay team before the Region III meet. Cannon, Howard, Fudala and Leif Brockman — the school’s high jump record holder — were pegged by Oslen for the relay.

The foursome was not interested in being part of a relay.

“Leif was the first leg, and he was joking that he was going to false start and disqualify us, so we didn’t have to do it,” Cannon said.

It’s a good thing Leif didn’t go through with it because the team — to their surprise — ended up qualifying for the state meet.

Howard, Halter and Cannon returned the following spring. Brockman graduated in 1985, which opened up a spot on the relay. All of a sudden, there was interest in the relay, and competition for the final spot ensued.

“It was a really weird thing because I was the captain of the team, and there were some lower classmen who were challenging for my spot,” Cannon said. “It motivated me to keep my spot.”

Fudala — an 800-meter thoroughbred — won the competition and became the anchor leg.

There were no expectations for the team as nobody expected much from them but Olsen.

“We didn’t take it that seriously. We didn’t train like athletes do today,” Howard said. “We didn’t eat right. We would work hard in the moment. When the coach got us on the field, he really drove us hard, and we gave it to him.”

The victories started piling up, but the times were not as impressive as other marks being reported from around the state. Times in Region III, which included schools on the Kenai Peninsula and the Mat-Su Valley, were slower than the ones posted by bigger and stronger runners from Anchorage schools.

“Every Sunday, the paper would print the track meet times,” Howard said. “We would look at the times and were like, ‘Oh my gosh, they are so fast. We are not even in the same league.’”

Bartlett possessed the top 1,600 relay team in the state. After Kodiak won a mid-season race at Dimond High School, Cannon remembered Fudala crossing the line and, while pumping the baton in the air, yelling, “bring on Bartlett.”

Fudala got what he wished for at the state meet, where Bartlett went in ranked first and Kodiak third.

It was a scorching day in Fairbanks — maybe 80 degrees — and, with the 1,600 being the final race of the meet, Olsen kept the four boys in the shade for most of the day.

“It was hot as heck,” Howard said. “The kind of heat that we never get in Kodiak, and if we do, it is in the middle of July, and people are losing their minds.”

For the Kodiak boys, who trained on a dirt track, the synthetic-surface track at North Pole was a treat. In Kodiak, the four boys often ran on the inside of the track, which was grass. They did that to stay out of the gravel. Kodiak didn’t host a meet, because the track wasn’t official.  On rainy days, they trained in the hallways of the high school.

“I had never seen that rubbery-synthetic surface before,” Halter said. “I was like, ‘Wow, this is incredible.’ … Running the state meet on that was like running on air.”

Howard approached every race like it was a 50-yard dash. This race was no different as Kodiak was in contention for an upset win after the opening 400 meters.

“When I got done with races, I wouldn’t be able to move,” Howard said. “I would lie flat gasping for air ... People thought I was being dramatic because I was literally in my lane face down.”

Halter handled the second leg of the race and put Kodiak in first when he passed the baton to Cannon. Bartlett retook the lead on the third leg and never relinquished it, but not after being pushed to the limits from Kodiak.

“I have a very clear memory that as soon as we finished, the Bartlett team was talking to each other saying who are these guys, where did you guys come from,” Howard said.

Kodiak posted a then-Region III record of 3:32.7 a week before state — the record is now 3:29.20, set by Grace Christian’s Kyle Schgak, Edgar Smith, Landon Libby and Ryan Meier in 2000. The Kodiak group trimmed 4.9 seconds off their best time at the state meet.

“When it came time to run, apparently we were ready,” Cannon said.

Halter remembers that Cannon’s dad recorded the state race. The video ended up with Halter because he was going to make a copy for himself. Nobody can find the video, but Halter suspects it is at his dad’s house.

“If I get bored one day, I’m going to gather up all his tapes and go through them because I believe that video lives on one of my dad’s tapes,” Halter said.

The 1986 record was nearly erased at the 2010 state meet when Chaven Davidson, Caleb Nymeyer, Riley McFarlin and Karsten Schick went 3:28.11. That team finished second at state to Bartlett.

Dunbar, who retired after a two-decade coaching career in 2018, coached nine of the 10 best 1,600 relay times recorded in the history of the program. The top spot eluded him.

“We put a lot of good teams together, and definitely that record was a target for us,” Dunbar said. “We made a nice run at it. More power to those guys — that is a really good record they set that year.”

Halter, a sprinter in high school, discovered long-distance running later in life. He has qualified for the Boston Marathon three times and ran the 2013 race that was tainted by the bombing that killed three people.

He recently ran, at the age of 50, a personal-best time of 3 hours, 6 minutes, which qualified him for the 2021 Boston Marathon.

“Looking back, maybe I should have run cross country, the mile and the two-mile (in high school),” said Halter, a computer administrator for the University of North Carolina-Charlotte. “I might have had some success at that.”

Fudala, the 1987 800-meter state champion, went on to run for the University of Alaska Anchorage. However, he never finished his career as he and his girlfriend up and left the state during a Christmas break. Now, nobody can find him.

“He quit school, the track team, everything,” said Halter, who was attending UAA at the time.

Howard lives in Kirkland, Washington, and owns Morgan Howard Productions, a communication company specializing in communicating for Alaska Native Corporations and Tribal businesses. His job brings him to Alaska often, mostly in Anchorage and the Southeast.

After high school, Howard walked onto the Oregon State University track team. He spent a fall semester as a Beaver before leaving the school for personal reasons.

“I was just curious to see if I did have proper training, how fast could I go,” Howard said. “One thing I do regret is never pushing myself.”

Cannon, a member of Kodiak’s 1985 American Legion baseball state championship team, is a Coast Guard firefighter in Kodiak. He is reminded of the 1986 record every time he passes the track, which is now one of the best surfaces in the state.

“We laugh about it because we knew we had done something pretty sweet, but we just didn’t know how long that record would stand,” Cannon said. “The longer it goes on, the more we realize that we really had a good team.”

Updated 5:39 p.m.: According to the Alaska Fire Servce, there were approximately 1,860 recorded lightning strikes throughout the state on Saturday and an additional 2,900 by 8 p.m. Sunday.

The institute could be awarded up to $300 million over the course of five years. From that amount, UAF can receive up to $10 million annually.

With 30-plus years experience, meteorologist Rick Thoman reflects on career