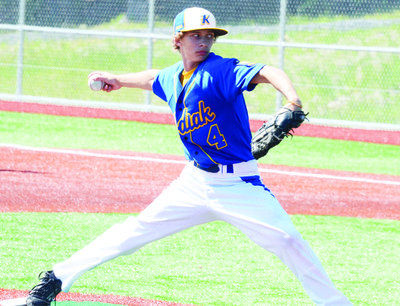 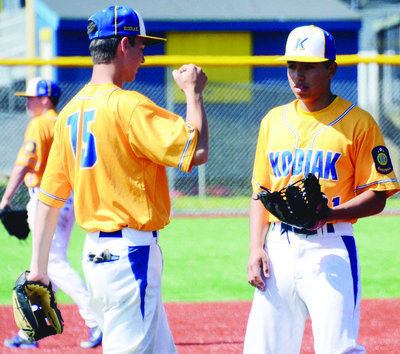 Post 17 received a six-inning masterpiece from reliever Sam Bennett in the first game, but lost to Eagle River, 9-7 in 11 innings.

Kodiak rebounded in the nightcap as reliever Alex Pace pitched 4 2/3 innings to earn a 10-8 victory.

“They ended up being our saving grace in those games,” Kodiak Post 17 manager Leonard Pickett said.

Kodiak lost both nonleague games — 15-1 on Friday and 14-1 on Sunday — that dropped its overall record to 6-7. The Bears are 4-4 in league play and in sixth-place in the eight-team National Division with 20 points.

Kodiak has plenty of time to make up ground on the leaders, as Post 17 has 10 conference games remaining — four at home over the next two weeks against third-place Kenai (6-4) and fourth-place Bartlett (6-3).

“I would like to be a little further up in the standings, but we do have a lot of games left to continue to improve and put some league wins in the column,” Pickett said.

Saturday’s first game was a four-hour affair that went two innings past the scheduled nine innings.

“I’ve never been involved in any game that long and I’m not sure when a Kodiak baseball team has,” Pickett said.

Arnold did strike out eight, but allowed six hits, which included a two-run home run to center field by Mike Rosenberg that staked Eagle River to a 7-4 lead.

Bennett held a hot-hitting Eagle River team in check over the next six innings as the Bears clawed back into the game to force extra frames.

Kodiak cut the lead to 7-5 in the fifth inning when Joe Schactler hit into a fielders’ choice that scored Joe Mauer from third.

A pair of run-scoring doubles in the seventh by Arnold and Brandan Pickett tied the game at 7-7.

Both teams were held scoreless in the final two innings, which forced extra innings.

In the 10th, Eagle River loaded the bases with one out, but Kodiak avoided disaster when Bennett got Cameron Fabacher to ground back to him on the mound. Bennett went home with the ball for the force out and catcher Josiah Chya relayed the throw back to first for the inning-ending double play.

Pickett led off the bottom of the 10th with a walk and advanced to second on a Kalen Willis sacrifice bunt. After an out and a walk to Jon LeVan, Austin Frick grounded out to third baseman Guido Gerali — Eagle River’s starting pitcher — that ended the threat.

Eagle River’s first two hitters of the 11th reached on walks and both came around to score on a Nate Raina sacrifice fly and a Trent Talley single that gave the Wolves a 9-7 lead.

Bennett suffered the loss despite allowing only one hit and one run in his six innings of relief. The right-hander struck out six and walked four.

Frick, Schactler and Arnold all had two hits for Kodiak.

Kodiak broke open the second game with a six-run third inning and had to hold on for the two-run win.

In the third, Joe Schactler drilled a bases-loaded single that scored Bennett, Arnold forced in a run with a walk, Pickett delivered a two-run single and a pair of runs scored off an error to give Kodiak an 8-3 lead.

Eagle River closed the gap to 8-7 by scoring four runs off of starter LeVan and reliever Alex Pace in the next two innings.

Pace settled down and held the Wolves to one run over the next three innings to earn his first win of the season. The left-hander allowed only two runs and two hits in 4 2/3 innings, while striking out five.

Kodiak received a pair of insurance runs in the sixth on a Frick triple to right field.

Eagle River scored one in the seventh and had a runner on base when Pace ended the game with a strikeout and a fly out to right.

“I think it is going to play a big part in helping the kids believe they can beat anybody in their division,” Pickett said.

Frankie Carlson drove in Kodiak’s only run in Friday’s nonleague game on a single that scored Bennett.

Ryan Bezona pitched the first 3 2/3 innings and gave up two runs on two hits, while walking seven and striking out four.

Pickett drove in the only run on a fielders’ choice. John Norton added a double.

Kodiak hosts Kenai in a pair of doubleheaders on July 4-5.

One day after ordering a stay on the effort to recall Gov. Mike Dunleavy from office, Superior Court Judge Eric Aarseth reversed his ruling, claiming the order was an administrative mistake.