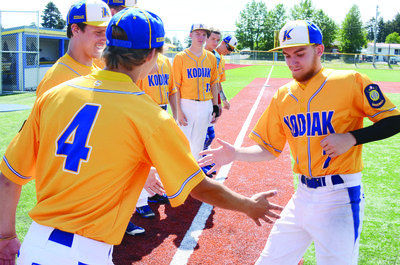 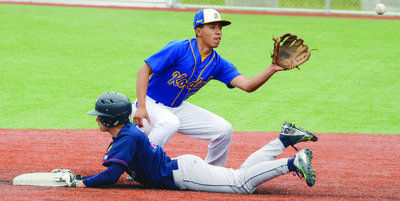 A Kenai runner slides into second ahead of the tag from Giovanni Martinez in an American Legion AA baseball game Saturday at Baranof Field. (Derek Clarkston photo)

A Kenai runner slides into second ahead of the tag from Giovanni Martinez in an American Legion AA baseball game Saturday at Baranof Field. (Derek Clarkston photo)

A second-inning at-bat by Aaron Hocum was what Kodiak Post 17 needed to get things rolling against Kenai.

The win was much needed after Kenai spoiled Kodiak’s Fourth of July by scoring four runs in the final two innings of a 6-5 victory in Friday’s league contest.

“That is probably the best at-bat I have seen from our team and any other team that we have faced all season,” Kodiak manager Leonard Pickett said. “It seemed like it might have been a little bit of a catalyst to get the boys sparked up a little bit.”

Hocum was down 0-2 in the count and fouled off five pitches before finally drawing a walk that loaded the bases for Jon LeVan, who led off the game with his first home run of the season.

“I didn’t want to be the last out and I was just trying to put it in play or draw a walk,” Hocum said. “I just kept battling.”

Kodiak scored three the next inning to take the lead for good, 5-3, on RBI singles from Ryan Bezona and Hocum and on a wild pitch that scored Schactler.

Post 17 added an insurance run on a Jakob Arnold RBI single in the fourth and two more runs in the fifth on an Austin Frick single and an Arnold bases-loaded walk.

The run support was more than enough for starting pitcher Sam Bennett, who settled down after giving up three runs on four hits in the first inning.

The right-hander no-hit Kenai over the next four innings and gave way to reliever LeVan in the sixth after throwing 110 pitches, while striking out eight and walking four.

Frick and Schactler combined for half of Kodiak’s 12 hits.

The win evened Kodiak’s conference record to 5-5 and moved the Bears to fifth in the eight-team National Division with 25 points — four points are awarded for a win, two for a tie and one for a loss.

Kodiak easily could have earned its second league sweep of the season, but couldn’t hold onto a late-inning lead in Friday’s nine-inning game.

Hocum was impressed with how the team responded the next day.

“We knew we were close and we could have beat them,” he said. “We just needed to work a little bit harder and we came back and beat them.”

In Friday’s game, Arnold held his former team in check through seven innings, but ran into trouble in the eighth.

Leading 5-2, Arnold hung a pitch to Kenai’s Tommy Bowe that was deposited over the left-field fence for a two-run home run that cut the lead to 5-4.

Kenai’s Calvin Hills greeted Kodiak reliever Austin Frick with a single to lead off the ninth. After a groundout, Justice Miller singled and later stole second.

Frick then struck out Justin Wisnewski, but then balked in the tying run and gave up

the go-ahead run on a Hector Rivera single.

Kodiak had a chance to tie it in the ninth when Brandan Pickett doubled with one out. Joey Mauer followed with a groundout, but Pickett was tagged to end the game trying to advance to third.

The late rally erased Kodiak’s three-run seventh inning that gave Kodiak a 5-2 lead and knocked out Kenai (7-5 league) starter Dallas Pierren, who struck out seven on 121 pitches. Frick and John Norton each hit run-scoring doubles during that frame.

Frank Carlson was ejected in the sixth inning when umpires said he slid into home with his cleats up. Carlson had to sit out the next two games.

Kodiak has split league games with the top three teams in the National Division — Eagle River, Chugiak and Kenai — this season. The Bears’ only league sweep was against Palmer.

“Splitting has been the name of the game for us,” Pickett said. “I don’t know what it is. We need to find a way to start sweeping some teams.”

Kodiak begins its last home series of the season on Friday against Bartlett, the fourth-place team in the National Division.

Hocum went 2 for 2 in Friday’s game, while Mauer and Schactler each drove in a pair of runs.

Mauer pitched four scoreless innings of relief. He allowed only one hit and struck out four.

In Saturday’s game, Carlson went 2 for 3 and drove in one run. Bezona pitched the first 4 1/3 innings and allowed only one run on four hits. He struck out seven and left with a 2-1 lead.

Kenai then scored 15 runs off of three Kodiak relievers.

The process was set in motion after the “John D. Dingell Jr. Conservation, Management and Recreation Act” was passed in May. In a letter published by the Fairbanks Daily News-Miner in April, Sen. Lisa Murkowski praised the passing of the law, which she noted was the result of “years of effort.”

“Their memory is all I’ve got, and that store is nothing, compared with the memory of them. My parents were great people,” Etcheverry said.