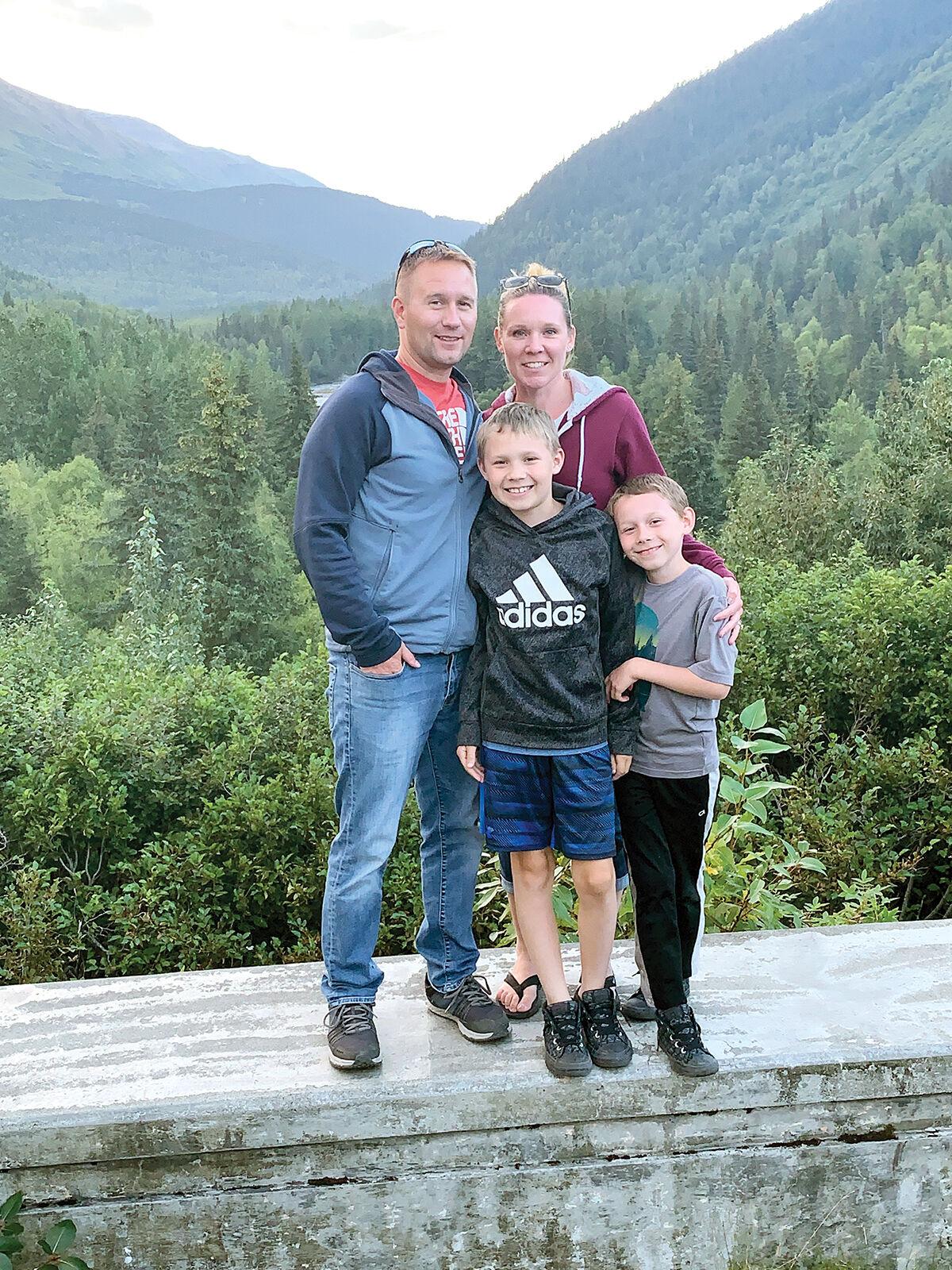 Michelle (Parker) Witt and her family. (Courtesy of Michelle Witt). 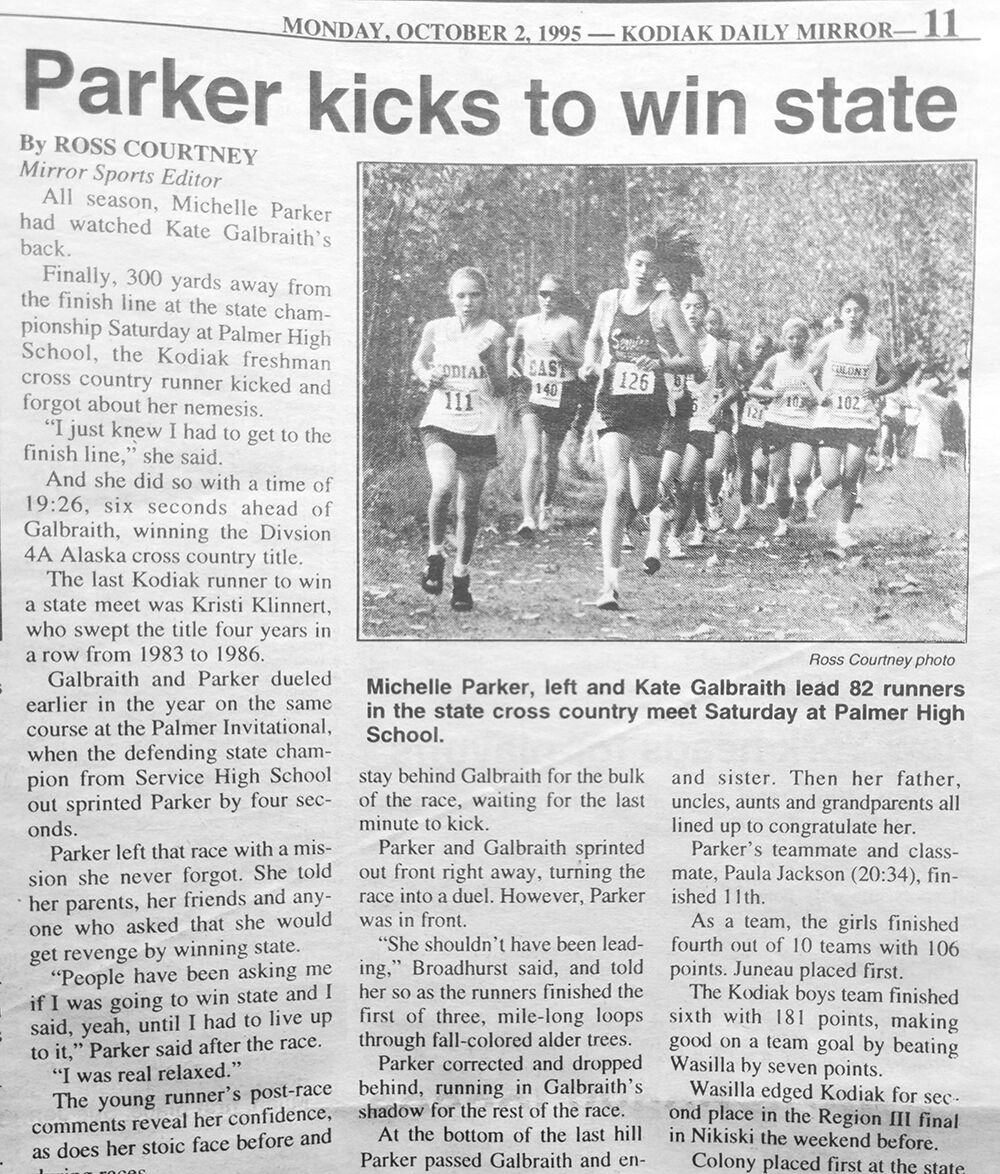 Michelle (Parker) Witt and her family. (Courtesy of Michelle Witt).

The first one is a gimmie as Kristi Klinnert was the state’s top runner from 1983 to 1986. The next two are a bit more challenging, even for a Kodiak running aficionado.

Some might correctly say Jaymi Bethea, because, well, she was the most recent winner in 2010. The middle lady is the toughest. This girl — all 5 feet and 85 pounds of her — won as a freshman in 1995.

Give yourself an air high-five if you said Michelle Parker — now Witt.

It’s been 25 years since Witt was the first to cross the finish line at Palmer High to capture the 4A girls state title.

“It’s crazy to me that it has been that long,” said Witt on Tuesday afternoon from Anchorage, a place she has called home since 2001. “To be able to reflect back on it and remember it is pretty cool.”

Witt was somewhat of an unknown when she arrived on the scene in 1995. She attended St. Mary’s Catholic School before enrolling at Kodiak High School. While at St. Mary’s, her father — an officer for the Kodiak Police Department — started a running group at the school. She spent practices attempting to keep pace with her older brother, Chris, a junior on the Kodiak high cross country team.

As an eighth-grader, she recalled finishing second in a race on the Kenai Peninsula and doing well in a race with other Kodiak runners.

“I still didn’t grasp what was going on or what that meant or how I was going to do,” Witt said. “Once I got into high school, I started training and realized where I was.”

Witt emerged at the right time as the Kodiak girls were in rebuild mode after graduating six seniors from the 1994 team, including Adelia Myrick, the Region III most outstanding female runner of the year.

However, Witt was only briefly mentioned and grouped in with two other freshmen — Sarah Waddell and Paula Jackson — in the Kodiak Daily Mirror’s season preview story that appeared on Aug. 11, 1995.

“These freshmen are definitely not out of shape,” senior runner Katrina Dochtermann told the Daily Mirror. “Some of them have been doing their homework.”

Mirror writer Lorenzo Perez started his recap story of the Palmer Invitational with this lead: “Forget about potential. Kodiak High School’s Michelle Parker may be ready to stake her claim as one of the state’s top female cross country runners.”

Witt and Gailbraith were not done racing at Palmer. After they both won their regional races, they met again at the state championships the last weekend in September. Battle No. 2.

Witt went in with a race strategy that was laid out for her by first-year coach Kim Broadhurst.

“I remember halfway through the race I was leading it, and she was yelling at me because that was not the plan,” Witt said.

After that exchange, Witt tucked in behind Gailbraith until making her move with 300 yards to the finish. She outkicked Gailbraith at the end and finished six seconds ahead with a 5-kilometer time of 19 minutes, 26 seconds.

“I remember coming up the hill right before you get to the track giving it everything I had to the end,” she said. “It was a pretty amazing experience.”

Expectations were high for Witt for the remainder of her high school career. Although she never duplicated her state championship performance, she graduated in 1999 with four top 10 state finishes and two regional titles — she won as a junior in 1997.

“Sophomore year was the hardest, coming back after winning state the previous year,” Witt said.

Witt said Kodiak had a different girls coach every year of her career but was fortunate to overlap with the arrival of the Dunbars. Marcus Dunbar wasn’t the high school coach yet, but Witt said she would often run with him and his wife, Kathleen.

“They were huge support for me in the later years,” Witt said.

Following a successful prep career, Witt ran two injury-riddled seasons at North Idaho College under Lewis Watkins — a graduate of Kodiak High School — before returning to the Last Frontier, where she completed her degree at the University of Alaska Anchorage.

Witt never left Anchorage and has been a licensed professional counselor at Bridge Counseling Connections for the past 14 years. The desire to help kids is what drove Witt to become a counselor.

“I wanted to make sure that kids had a person to talk to about certain things,” Witt said.

She has two boys with her husband of 13 years and still runs recreationally and in community races. Her preferred distance these days is a half-marathon. Standing at 5-foot-6 now, she occasionally gets recognized as that tiny freshman girl from The Rock who won the 1995 state title.

“There are people who I ran against in high school, and they know who I am, but I honestly keep it pretty under wraps,” she said.