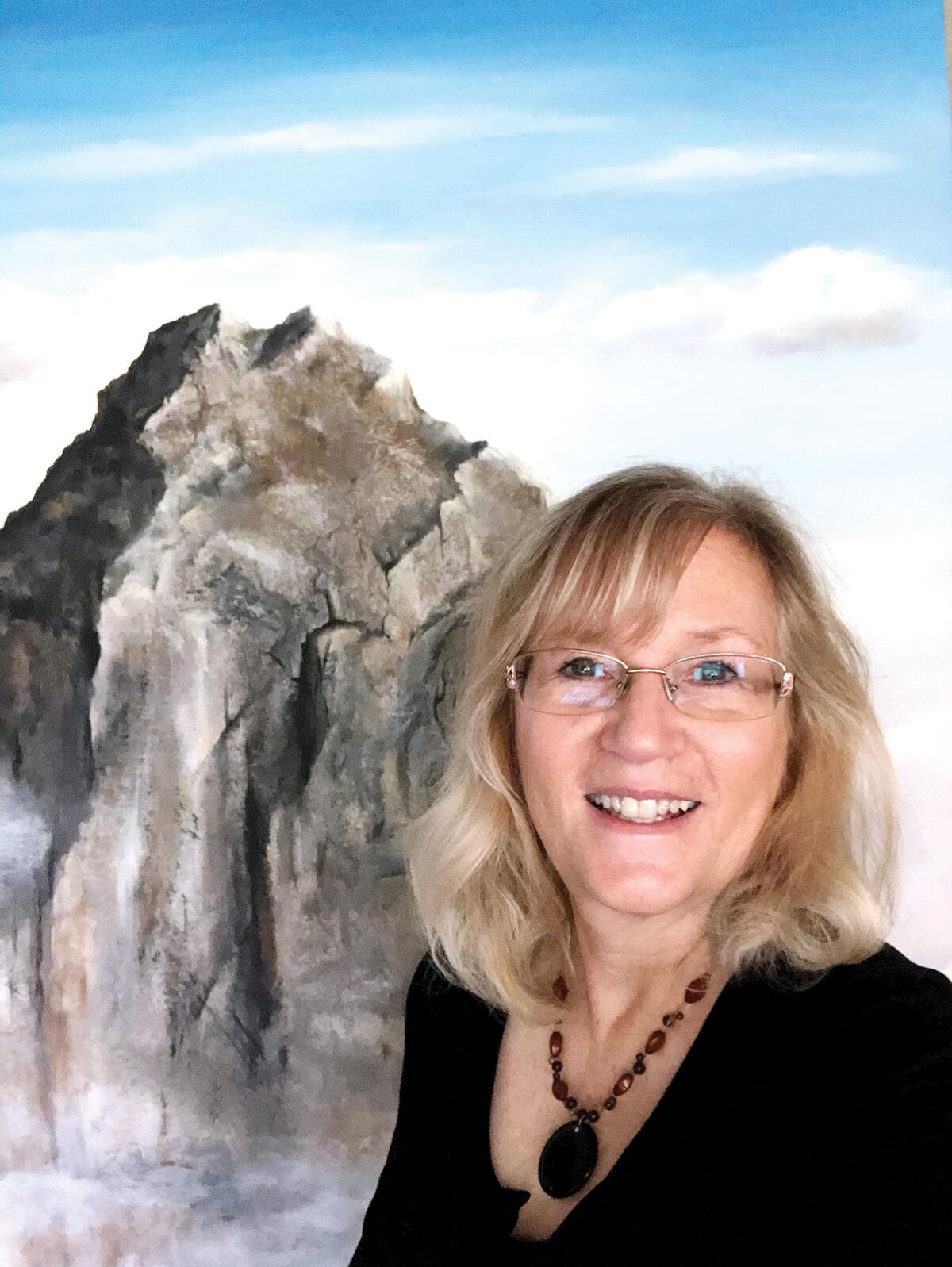 Linda Leichtfuss — Suryan back in the day — stands next to a painting she painted. Leichtfuss, a 1976 graduate of Kodiak High School, was a three-time cross country state champion. 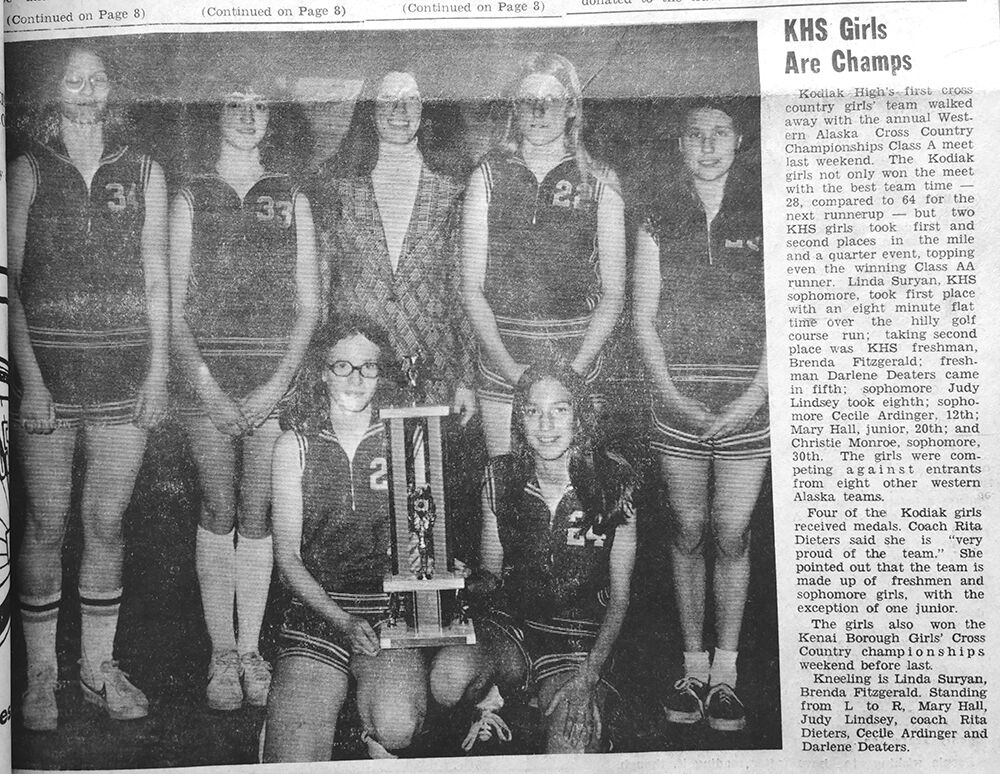 Linda Leichtfuss — Suryan back in the day — stands next to a painting she painted. Leichtfuss, a 1976 graduate of Kodiak High School, was a three-time cross country state champion.

Not even an attacking dog could slow down Linda Leichtfuss during the prime of her running career in the 1970s.

The dog fiasco happened while competing on a new Kodiak High track on a wet day. Back then, knee-high socks were standard for the ladies, as were the basketball uniforms that doubled for cross country and track uniforms.

“The dog comes up and starts jumping up on me while I’m running. It steps on the heel of my shoe, and my shoe goes flying off,” said Leichtfuss — Suryan in her running career. “I kept running, and my muddy sock started just flipping off my leg — people were laughing, and I am laughing with them.”

Like she did her entire prep career, Leichtfuss crossed the finish line first — but that was the only time she finished with only one shoe on and sock barely covering her foot.

“You got to keep going,” laughed Leichtfuss on Tuesday from her home in Burbank, Washington state, a place she and her family has called home for the past 36 years.

Leichtfuss is a forgotten star in the history of Kodiak High sports. But make no mistake about it, she was the school’s first female star, anchoring Kodiak to Western Alaska Cross Country Championship Class A titles from 1973 to 1975 in the team’s first three years of existence. Leichtfuss was the top overall finisher in all three races and graduated from Kodiak High with four individual state titles — she was a Class A state mile champion as a freshman, winning in 5:593. She never lost a race during her cross country career.

In a time when female sports were just starting to emerge at Kodiak High, Suryan was was the school’s first female state champion.

“When I won state as a freshman, I ran from the second lane — I ran a mile from the second lane,” Leichtfuss said. “I knew nothing. I thought my coach and all the people were waving hi, and I was waving back. They were saying move over, get in the first lane.”

Leichtfuss moved to Kodiak shortly after the 1964 Good Friday earthquake when her dad — a prominent figure in the seafood industry — uprooted the family from Anacortes, Washington state, to The Rock. As a kid, Leichtfuss enjoyed running. Her legs took her up and down mountains and all over town.

Leichtfuss said the coaches stressed teamwork and running together.

“Brenda and I would do our warmup and then take off — we wanted to run fast,” Leichtfuss recalled. “Well, when we got back, coach was not happy with us because of teamwork. She would tell us to go run it again — just you two.”

That could be how Leichtfuss became so good. She put in more miles — in the school’s hallways and outside on the roads — than the rest of her teammates. She got faster the older she got, turning a winning time of 7:37 as a senior.

“Linda was very humble about her accolades in running,” said Rounsaville, a grade below Leichtfuss. “She was very quiet.”

Leichtfuss doesn’t remember the details about her state championship runs, other than she simply enjoyed being part of a team. At the time, she didn’t realize she was making history.

“I didn’t really,” she said. “It seemed to me like I could have done better. If I would have put more work into it, I could have been good.”

After graduating from Kodiak High in 1976, Leichtfuss spent a year running cross country for Idaho State University before deciding running in college wasn’t for her.

“I really didn’t like competing,” she said. “I didn’t have a competitive spirit. I just liked to run.”

She continued running until 1994, when a health scare forced her to stop. She had three cerebral hemorrhages and a stroke that caused periods of vision loss. Her doctor advised her to give up running. She had debilitating headaches, couldn’t understand language, would talk slow and walk to one side.

“I had some vision, but it was flashing lights,” Leichtfuss said. “When I was running, I couldn’t see the ground I was running on.”

She fully recovered from the stroke, but the aftermath was a continuous cycle of seizures. Those lasted until 2012, when she had a craniotomy to reduce the frequency of the seizures. She now considers herself well.

“It was very hard when you got something that you really loved to do, and you couldn’t,” Leichtfuss said. “That is when I turned more to the arts. When I couldn’t run anymore, that is when I started painting.”

She started with murals but now focuses on portraits — humans and dogs. Her acrylic artwork is visible around Burbank and in a children’s home in Africa, where she visited in 2009 to paint a mural.

At 62, she is a mother of two and has two grandsons, ages 15 and 1. She hasn’t visited the Emerald Isle since her college years and doesn’t have family here anymore.

Decades after Suryan graduated, under the guidance of coach Marcus Dunbar, Kodiak cross country and track transformed into a state powerhouse, collecting hardware and sending nationally-ranked runners off to college. Leichtfuss was pleasantly surprised to hear of Kodiak’s running success.

“My gosh, that is so crazy coming from what I grew up with to how it evolved into that and grew into that. I love that,” she said. “We just started out by getting a few girls together, and let’s run.”

“We want to have a mobile crisis team of people going out with fire and police — whichever entity needs the help,” Sanders said. “They would go and meet with folks in crises and help de-escalate the issue ..."

Alaska recorded more than 1,200 new COVID-19 cases among residents and nonresidents over Tuesday and Wednesday, according to a Thursday update from the state Department of Health and Social Services.