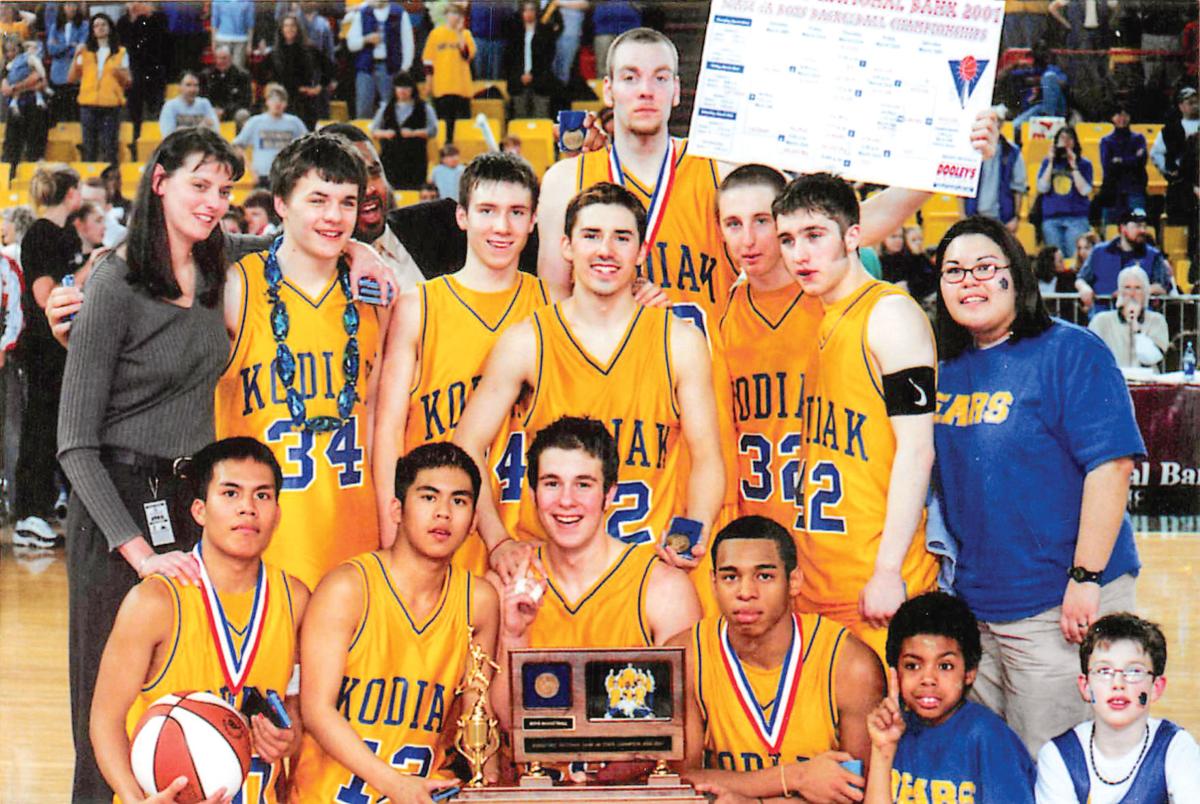 The Kodiak High School boys basketball team poses with the championship trophy after beating East Anchorage, 55-52, in the 2001 4A state championship game at Sullivan Arena in Anchorage 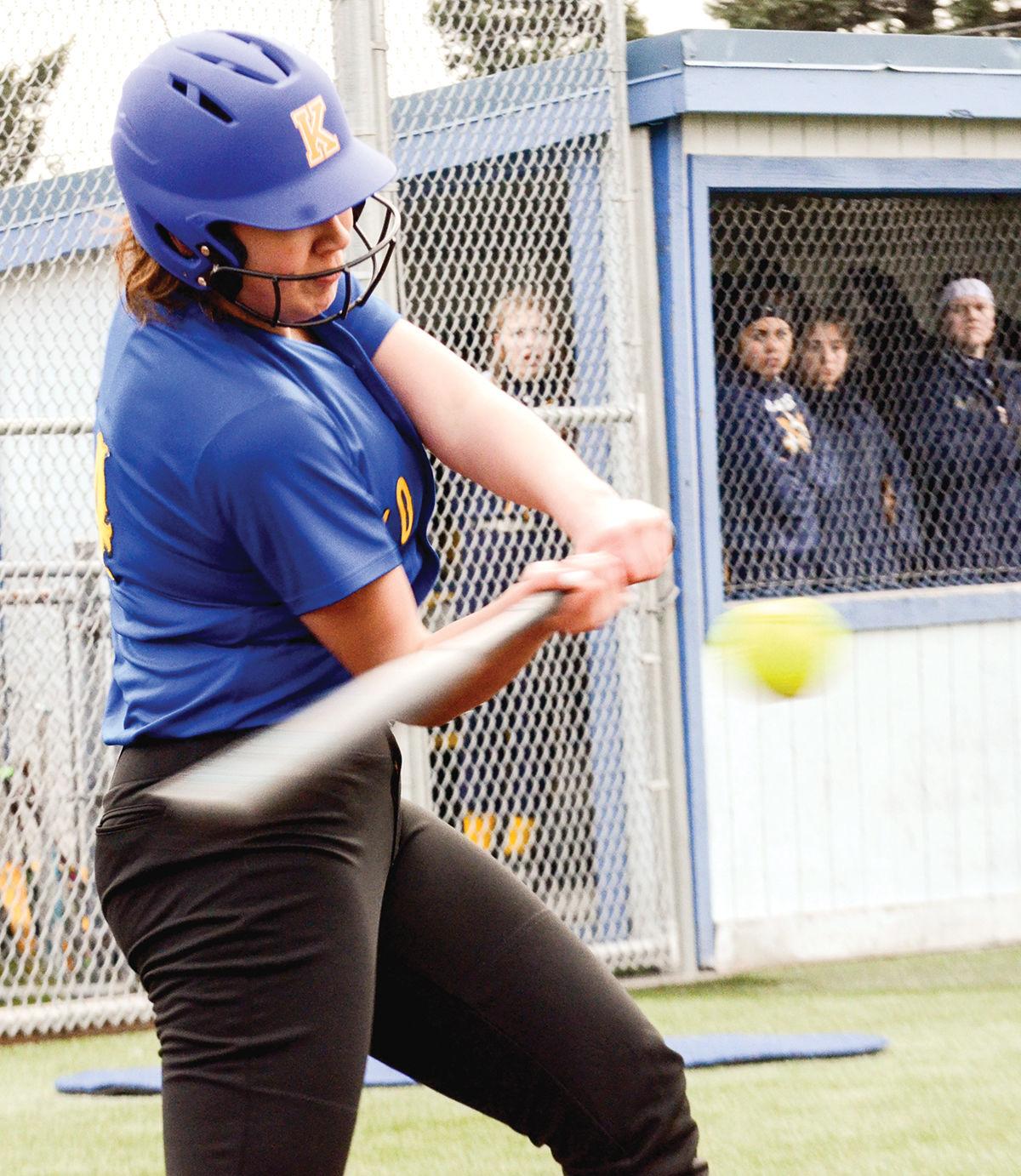 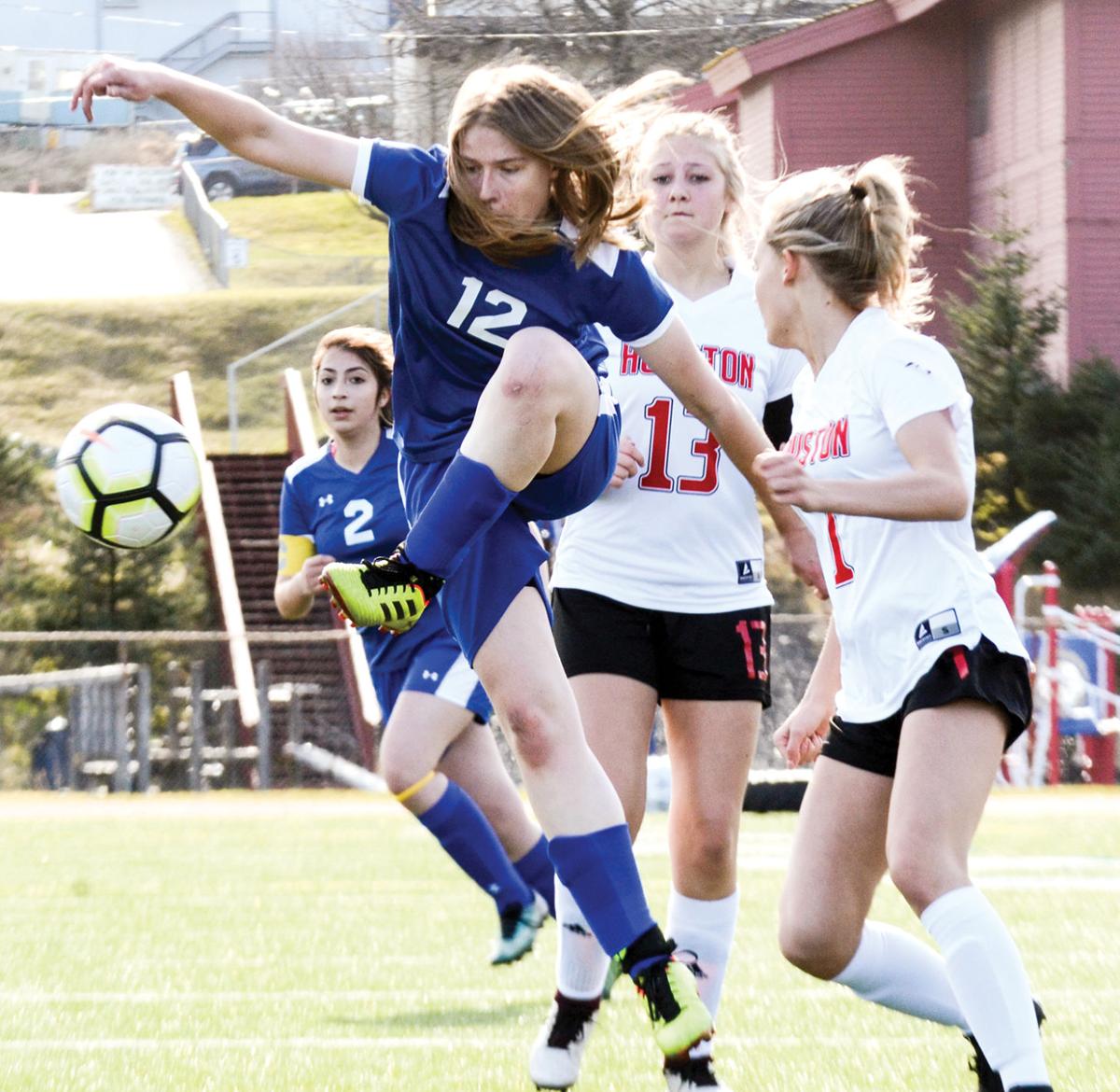 Kodiak’s Cassie Scherler kicks the ball during a high school girls soccer match against Houston in April at Joe Floyd Track and Field.

The Kodiak High School boys basketball team poses with the championship trophy after beating East Anchorage, 55-52, in the 2001 4A state championship game at Sullivan Arena in Anchorage

Kodiak’s Cassie Scherler kicks the ball during a high school girls soccer match against Houston in April at Joe Floyd Track and Field.

It’s that time of the year where we take a look back at what transpired over the past 12 months.

From high school skaters to youths, hockey in Kodiak boomed in 2019.

Carly Glover reached the national spotlight by being invited to the USA Hockey National Player Development Camp over the summer in Minnesota.

Glover — one of 28 forwards from her birth year selected to the camp — skates for the Kodiak Hockey League 18U squad and the Alaska All-Stars 19AA girls select team.

“I was really stoked,” Glover told the Daily Mirror in September. “It was my second year going, so I had a little more experience, and I was a little more confident on the ice.”

The KHL 10U team won a pair of tournaments during 2019 — the Peninsula Winter Games in January and the Turkey Shootout in November.

The Kodiak Little League Junior All-Stars advanced to the District I Championship game for the first time since the 1990s by upsetting top-seed Dimond-West 15-10 in July in Anchorage.

“They are pretty pumped. They kicked butt and were amazing,” Kodiak coach Bryan Larson said.

Kodiak rebounded from its 18-7 pool play loss to Dimond-West by scoring six runs in the first and five in the fourth to seal the upset win.

Kodiak fell to Nunaka Valley 11-0 in the championship game.

Sophomore Connor Marbrey continued Kodiak’s long-distance running success by winning the quadruple crown at the Region III Track and Field Championships in May.

It was a landmark season for the Kodiak girls soccer squad as the fifth-year program qualified for the Division II State Championship for the first time.

Kodiak tied for seventh in the state.

“Hopefully this instills a love for soccer in our school or our community,” Kodiak coach Marc Mens told the Daily Mirror in May. “I hope this inspires kids to give it a shot. I would venture to say we are a successful program now, so let’s keep it going.”

The resurgent Kodiak High softball team scored their best finish at the Division II State Championships — third — in a decade.

Led by Northern Lights Conference most valuable player Cameron Bolen and coach of the year Tom Bolen, the Bears snapped an eight-game state losing skid and came a victory away from the state championship game.

“We got what we deserved — third place,” Kodiak coach Tom Bolen told the Daily Mirror in June. “We were the third-best team there but we had a chance at being special and winning the tournament.”

Kodiak opened the tournament with wins over Hutchison (14-1) and Ketchikan (10-8) on Friday, which placed the Bears into a winner’s bracket game against Sitka and a win away from the state championship game.

Kodiak held leads of 5-1 and 8-5 against Sitka before falling 13-12. The game ended with the tying run on third and the go-ahead run on second.

The Bears then fell to Ketchikan 14-8 in an elimination game. The Kings scored six runs in the sixth inning to break open a tied game.

“The girls played unbelievably,” Bolen said. “After that big game against Sitka, which I really thought we were going to win, it was just hard to keep that energy level up for an elimination game that followed right after.”

For the first time since 2011, the Kodiak boys and girls cross country teams both competed at the state meet.

The boys advanced to stage by zooming to a 26-point victory over runner-up Colony at the Region III Championships in September.

Connor Marbrey and Braxton Gruner paved the way for Kodiak, finishing first and second. Marbrey became Kodiak’s first individual champion since 2017 by winning the 5-kilometer race with a time of 16 minutes, 35.49 points. Gruner finished in 16:52.93.

The Kodiak girls ended an eight-year state-less drought by placing third — 12 points ahead of fourth-place.

“When the girls stepped up, they just had so much positive momentum behind them,” Kodiak coach Ashley Mortenson told the Daily Mirror in September. “Guys were lining the start line, playing music. They had poster boards and were right there with them.”

Freshman Elizabeth Parnell led the ladies with a runner-up finish, clocking a time of 20:04.31.

Hallee Blair and Ahlissa Timu re-wrote the girls’ track and field record books during the spring.

Blair was the state runner-up in the 300 hurdles and was third in the 100 hurdles.

Timu — now a freshman at Lane Community College in Oregon — finished fourth at state in the shot put and the discus.

“I wrote down a goal sheet this year and high school All-American is the only thing I did,” Nummer told the Daily Mirror in April. “I really did not have the year I was expecting to have or wanting to have. I had a lot of adversity that I had to work through and to cap it off with a third-place finish in one of the toughest tournaments in the nation was pretty sick.”

By placing third, Nummer was awarded a coveted eagle statue that was given to the top three finishers in each weight class. When he arrived back at his Kodiak home, he placed the statue on a shelf in his bedroom alongside the bracket.

In the consolation semifinals, Nummer rallied from a two-point deficit to win 7-4 and earn a spot in the third/fourth-place match.

He overcame a six-point deficit in the third/fourth-place match to win 12-10 in sudden death.

“I was doubting myself a little bit this year, not having the finishes that I wanted to have at the end of the season,” said Nummer, who placed third at the Alaska state tournament. “I know I have been at this level for a while, but it feels really great to get the chance to prove it.”

Kodiak’s Hannah Wandersee finished her basketball career as one of the top players in University of Alaska history.

The 6-foot-2 center concluded her career as the No. 8 scorer in program history with 1,378 points, while nobody has won more games (122) as a Seawolf then Wandersee.

As a senior, she was voted the Great Northwest Athletic Conference player of the year.

“Entering college basketball, and the kind of player I started out as, I never could have dreamed of getting this honor, but also as soon as I entered this program, I knew I could do great things if I kept meeting the standard coach  (Ryan) McCarthy sets for his players,” Wandersee told the Daily Mirror in March.

Wandersee graduated from Kodiak High School in 2014 after leading the Bears to a 4A state title with a perfect 27-0 record.

“It makes me feel proud of the place I came from and hope that because of my accomplishments kids everywhere in rural Alaska, who are limited in exposure for sports, know that no matter what kind of level they start at, if they continuously work hard and do the right things they can reach their goals,” Wandersee said.

In April, the 2001 Kodiak High School boys basketball state championship game victory over East Anchorage was inducted into the Alaska Sports Hall of Fame as one to the greatest moments in state history.

“As much time as Kodiak kids and family spend in the Anchorage airport, it will be fun to have a piece of us in there.”

The Alaska Sports Hall of Fame is located at the Ted Stevens Anchorage International Airport.

“That team was very close, and they had a goal,” Fogle said. “I don’t know if their goal was to win a state championship, but they knew they could be very good. They accepted every challenge and kept getting better. They were resilient and kept fighting.”