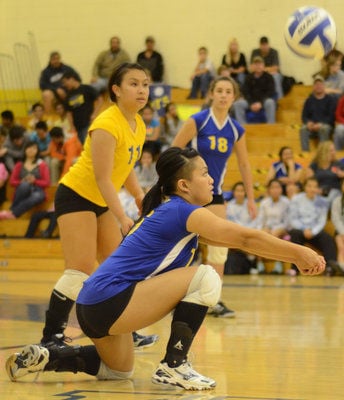 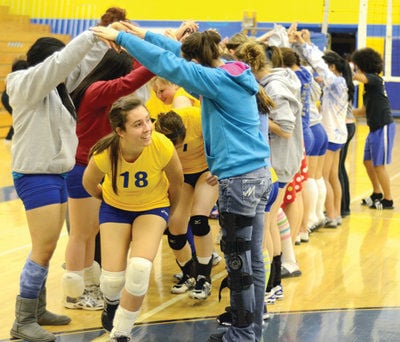 Hannah Wandersee is known for her play at the net, but on Friday she left the court smiling over a different part of her game.

After each assist, the junior couldn’t help but flash a smile in the direction of Kodiak coach Amy Willis.

“At practice she lets me practice it, I like it, but she never lets me do it,” Wandersee said.

Her time came Friday in a match Kodiak controlled from the opening serve. The Bears only trailed twice, both times early in the third set.

“I really wanted to let her have an opportunity to play a whole match as a single position and not have to go ‘I’m a middle right now,’’’ Willis said.

After sitting out the first set, Wandersee played the rest of the match as an outside hitter, which gave her a chance to see the court from another prospective.

She was glowing about her three-assist, eight-kill performance.

“I thought they were pretty good — just to go out there and start setting,” said Wandersee, a 2011 first-team NLC middle hitter.

Willis had a different reaction.

“I’m not sure in a fast-pace game situation it is exactly what we need,” she said. “She is OK. She got her hands up there and got three kills for us. That is the setter’s job — make a smart choice on where to set.”

Wandersee was not the only one playing out of position on Friday. Libero RJ Aquino played in the front row, while Carissa Cannon took over Willis’ job of calling Kodiak’s serve placement.

Kodiak broke the first set opening with an 11-3 run that gave the Bears a 20-10 cushion.

The Bears took a 9-2 lead in the second set before the Kardinals tied it at 10. Kodiak used a 10-3 run, including service aces by Aquino and Kalameli Matautia, to take a 20-13 lead.

Kodiak erased a 1-0 and 2-1 deficit in the third to finish the match in less than an hour.

Sonic Drive-In, which has its corporate headquarters in Oklahoma City, Oklahoma, is a burger chain known for its burgers, foot-long hot dogs, slushies, limeades and ice cream desserts.

What do these three community members have in common? They are all seeking to beat incumbent Sean Rice for Fairbanks North Star Borough School District Seat F in the Oct. 6 local election.