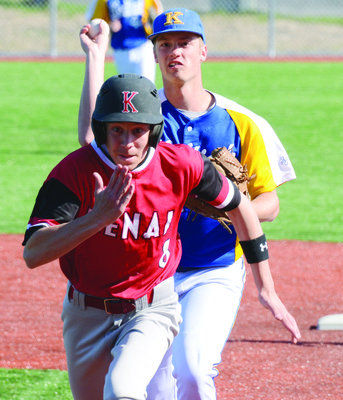 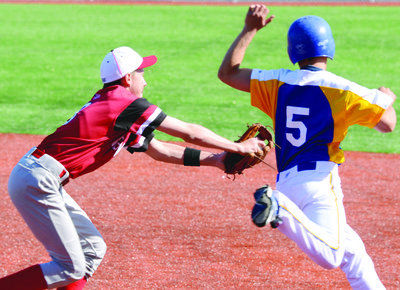 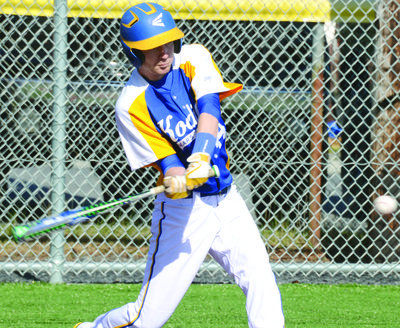 The Bears beat the Kardinals 10-5 on Friday and 11-1 on Saturday at Baranof Field.

Kodiak improved to 7-1 in the conference — 6-0 against South Division teams Kenai, Soldotna and Homer — and 10-6 overall.

After sweeping all the South Division squads, the Bears are one win away from earning their second consecutive title. A Kenai loss would also give Kodiak the top spot. The Kardinals (2-2 in conference) played Soldotna late Tuesday evening.

The South Division title would give the Bears the No. 1 seed for the conference tournament that begins May 29 in Soldotna.

“That was one of your goals coming in this year was to compete and win our division,” Arnold said. “We were excited about that. We know we still have a lot of work to do.”

Kodiak does have two conference games left and both are at home on May 22 against Wasilla and May 23 against Colony — the top two teams in the North Division.

“When Bryan Ferris (Kodiak activities director) and I built the schedule, I really wanted Colony and Wasilla near the end because they are always tough,” Arnold said. “I think it will be a good challenge for us.”

Kodiak is off this week and enters its game against Wasilla with a four-game winning streak.

Down early to Kenai, Josiah Chya delivered a pair of clutch hits to propel Kodiak to victory.

Chya’s first hit — a deep double to left-center field in the fourth inning — scored Aaron Polasky and pulled Kodiak to within one at 4-3.

Two batters and two outs later, Chya scored and tied the game on a well-executed safety squeeze by Myles Wilson.

Chya admitted afterward he misread a sign from third base coach Arnold during his at bat in the fourth.

“He gave me the bunt sign and I misinterpreted and thought it was the hit-and-run and I swung and got a double,” Chya said. “I guess that kind of lighted my fire.”

The next inning, Chya broke the tie with a bases-loaded single that scored Tyler Jester and Alex Pace.

After blasting the double in the fourth, Chya didn’t try to do too much in the fifth.

“I just try to think of what my grandpa always tells me, ‘just keep your head in the game and don’t swing like your going to hit a home run,”’ Chya said. “I just listened to what he said and went up nice and relaxed and hit another one.”

That opened the floodgates as Kodiak scored four more in the fourth to complete the come-from-behind win.

Arnold said he was glad Chya missed the sign and awarded his catcher the game ball.

“He came up huge for us,” Arnold said. “What I like about him the most is the way he handles the pitchers. He was due. He has been swinging a good bat. I am really happy for him.”

Jester added a double, a single and drove in two, while Pace drove in two and collected a single.

Wilson and Frick each contributed a pair of singles.

Kenai opened the scoring with a run in the first, but Kodiak struck back with two in first on a Kardinals error and an Alex Pace single that plated Jester.

Kenai retook the lead in the third with two runs and added a solo run in the fourth.

“Everybody likes those (home runs), but from what we are trying to accomplish defensively that was our best game of the year,” Arnold said.

Kodiak committed only one error — its lowest total of the season. That error did lead to Kenai’s only run of the game.

Frick’s first-inning solo bomb easily cleared the left-field fence, bounced in the middle of Baranof Street and came to rest in a yard across the street.

LeVan’s blast was a two-run shot in the second inning that landed on the top of the track storage shed beyond the right-field fence. That put Kodiak ahead 6-0. LeVan ended with three RBIs.

Kodiak scored two runs in the fourth via Kenai errors and three in the fifth — two more on errors and another on a Frick sacrifice fly — to end the game.

The left-handed Pace allowed three hits, walked one and struck out six. The run that scored in the fourth was unearned.

Wilson made the announcement Friday afternoon during a House floor session, noting she will be taking a position with the Office of Children's Services as a policy adviser for Department of Health and Social Services Commissioner Adam Crum.

The vetoes, which took funding away from the Alaska ferry system and the state's school bond debt reimbursement program last summer, required a three-fourths vote of the Legislature to override, a 45-vote threshold that lawmakers were unable to achieve.