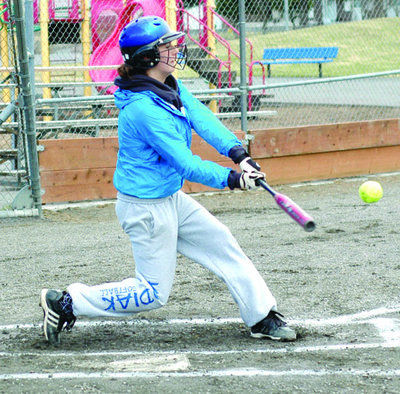 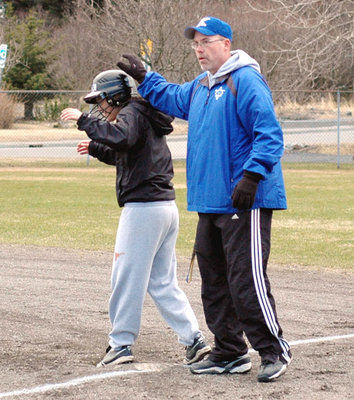 Kodiak coach Sam Catt pats a player on the head after she got a base hit during a scrimmage Tuesday.

Kodiak coach Sam Catt pats a player on the head after she got a base hit during a scrimmage Tuesday.

Sam Catt left his first official practice as Kodiak’s softball coach more than a month ago feeling a bit concerned.

During that inaugural practice, the Bears’ starting second baseman from last season, Richelle Ferris, tore a tendon in one of her fingers, which also pulled away pieces of bone on her glove hand.

Feeling of concern? You bet.

The injury could cost Ferris her entire senior season, as Catt is not sure if she will return.

“I left her on the team, because when she does heal she deserves the right to be here,” Catt said.

Over the past month, though, Catt’s concern for the team has morphed into excitement.

And now the coach is downright giddy as the Bears open their season Friday at home against Dimond.

“I’m really excited and I am a little nervous, I don’t know why,” Catt said. “The girls have been practicing great and working hard. I know they can do well. I guess I am nervous for them because I want them to do well.”

Catt enters his first season as coach after taking over for Dave Allen, who guided the team the past seven seasons.

Catt inherits a mostly upperclassmen roster — all but two players of the 11 who are on the varsity roster are underclassmen. All 11 played in at least one varsity game last season.

The players, though, have had to make an adjustment to a new style of coaching. Catt has been stressing defense and smart and aggressive base running.

“I think they are doing pretty good,” Catt said. “I wouldn’t say it is just a slam dunk and they have just bought into it. I think it is hard no matter what type of sports team it is and what kind of coach it is. A lot of new stuff is hard.”

Kodiak finished last season with an 8-9 record, 3-5 in the Northern Lights Conference, and missed the small-school state tournament for the first time since 2007.

Catt hopes Kodiak can get back on track this season by winning the conference and qualifying for state.

Filling in for Ferris at second is sophomore Jessica Emmerson, while junior Tasha Pedersen and senior Melody Valdez anchor the other two outfield spots. Newcomer Rosevonne Sala is at first base.

Mahle got the majority of the work inside the circle last season and she will again carry the load this season.

“She looks pretty good,” Catt said. “I’m still a little behind the power curve in being a good pitching coach. I’m still learning how to pitch and Dave has been a big help with that. But, what I see is she looks strong.”

Pederson will also see time in the circle, as Catt only plans on using two pitchers for the season.

On offense, Mahle and Matautia combined for 29 hits and 25 RBIs last season. They will anchor a lineup that doesn’t have many holes.

“If they hit the way they can, we are going to have a good hitting line-up — not a lot of weak spots,” Catt said.

Catt predicts the conference title will come down to Homer or Kodiak. The two play a three-game set the last weekend of the season in Homer.

“They are the rival and usually what it boils down to is we have to beat them to get to state,” Catt said. “I’ve told the girls that I would love to be in the position that when we go to Homer that it is not do-or-die. Sure, we still want to beat them, but let’s not hinge it on the last game. Lets do hard work all year.”

Mirror writer Derek Clarkston can be reached via e-mail at sports@kodiakdailymirror.com.

A GoFundMe to pay for the teacher's legal expenses doubled overnight after her appearance on a cable TV news program.

The House voted 23-16 to adopt a $4.2 billion budget in unrestricted general fund spending. It would be funded from taxes and Alaska Permanent Fund revenues.

This is the seventh month of haggling over a new three-year public employee contract. The next negotiating session is in early June. The current contract expires June 30.