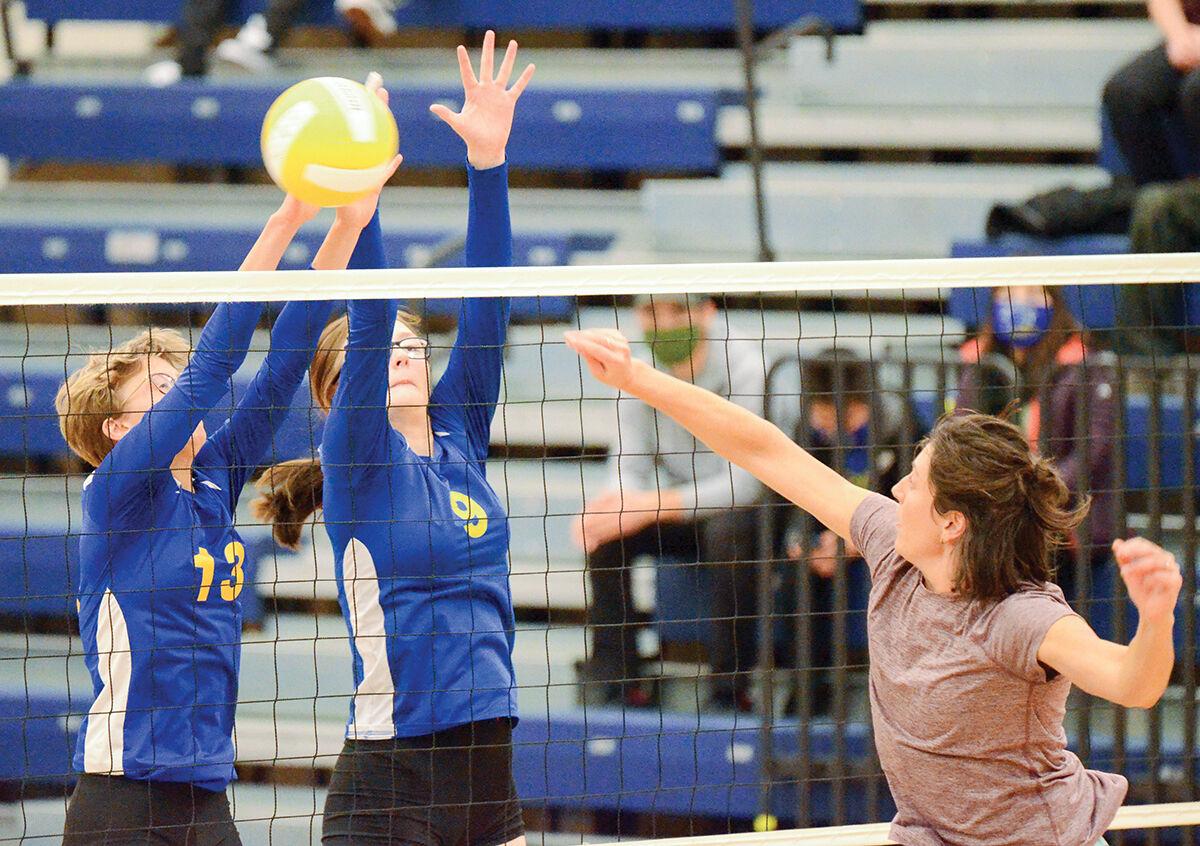 Kodiak’s Elan Hilty (left) and Kristen Carstens go up for a block during a volleyball match against a community team Friday at Kodiak High School. 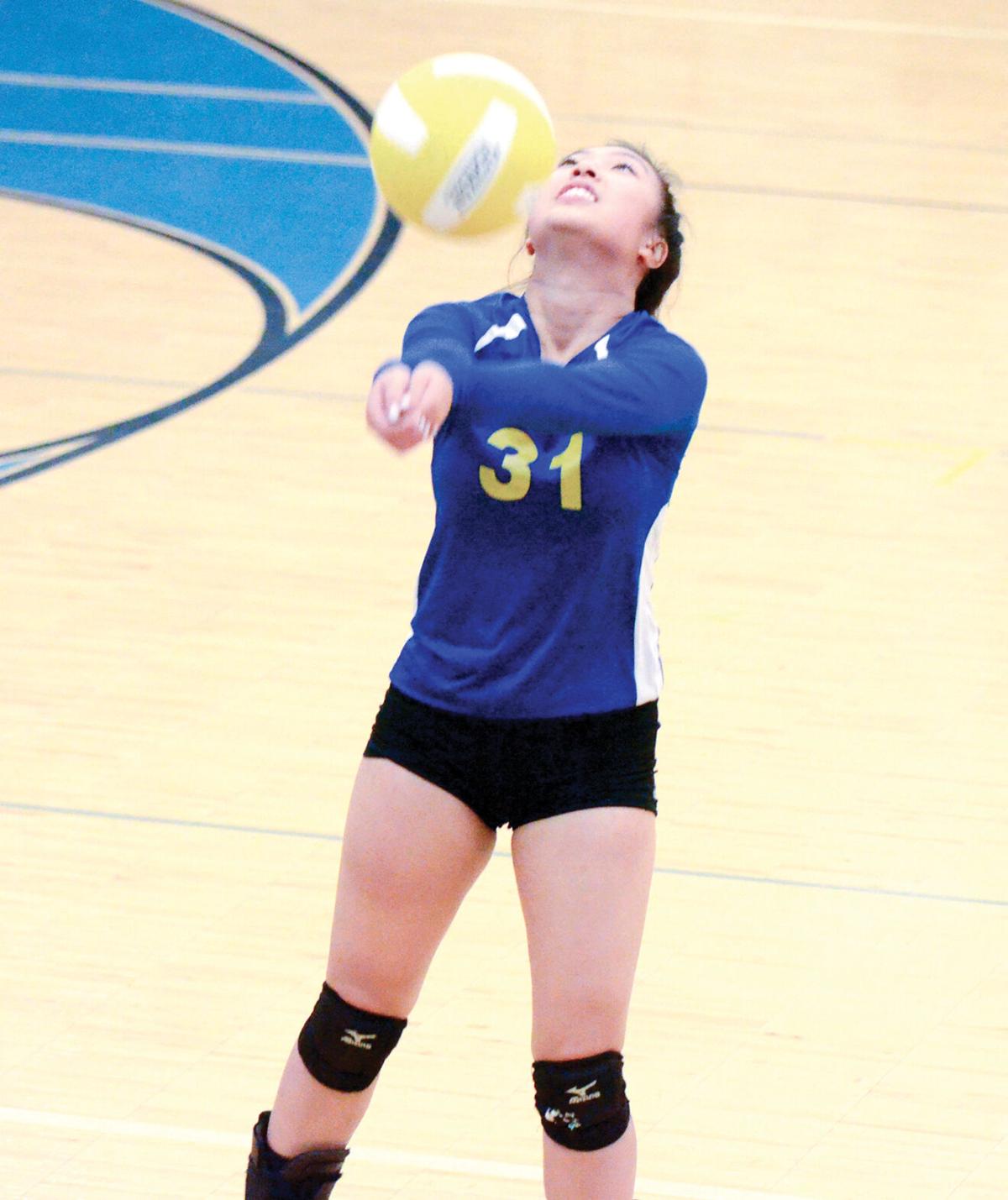 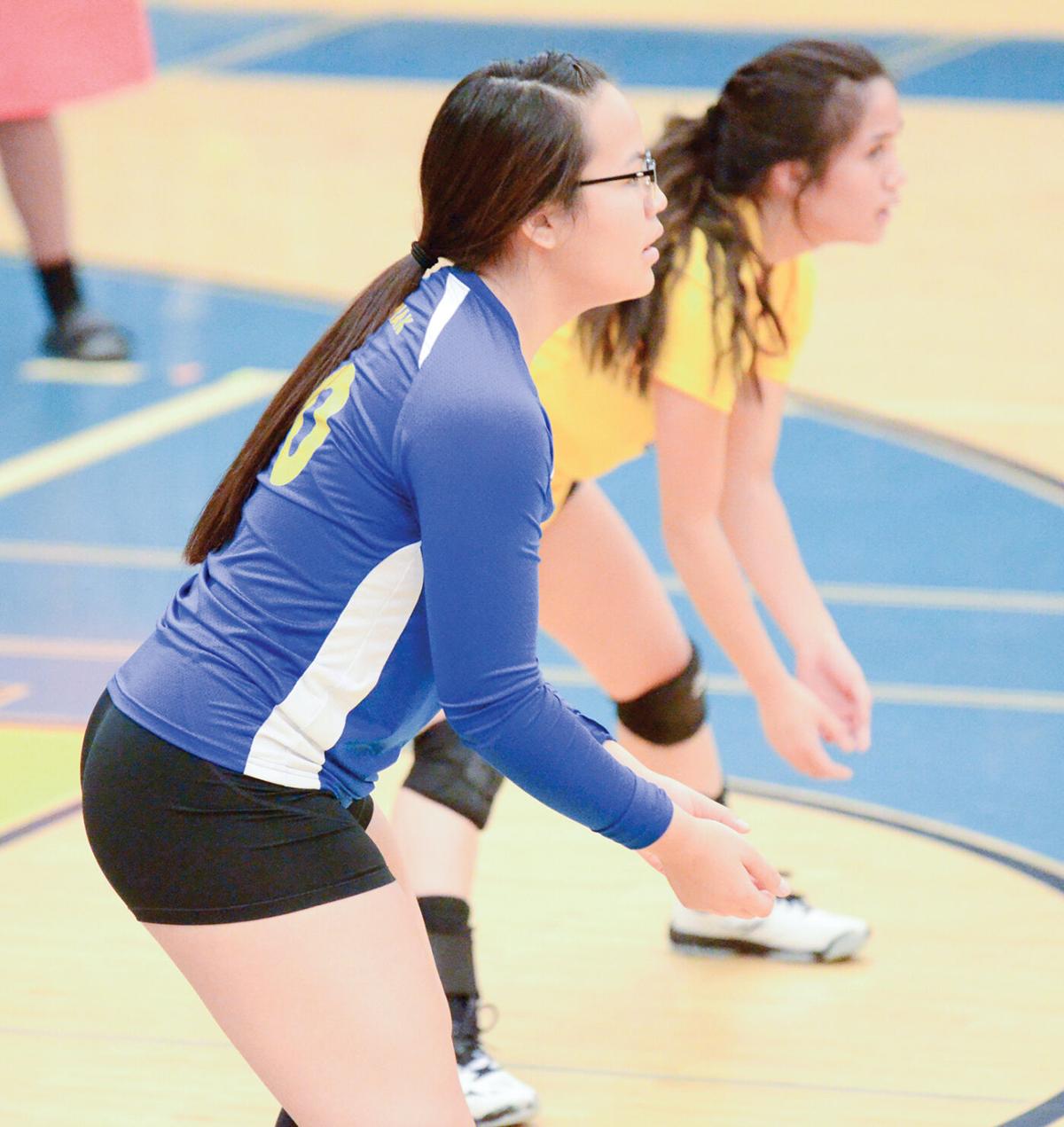 Kodiak senior Teanna Amodo sets up to receive a serve during a volleyball match against a community team Friday at Kodiak High School.

Kodiak’s Elan Hilty (left) and Kristen Carstens go up for a block during a volleyball match against a community team Friday at Kodiak High School.

Kodiak senior Teanna Amodo sets up to receive a serve during a volleyball match against a community team Friday at Kodiak High School.

It wasn’t a victory over Colony in the Northern Lights Championship volleyball match, but it was something worth celebrating in this odd COVID-19 season.

In the final match against a collection of local ladies, Kodiak High’s spikers won the best-of-3 series (27-25, 17-25, 25-14) in front of a sprinkling of mask-wearing fans Friday at the high school gym.

Longtime Kodiak coach Amy Willis wanted to send her gals off right with a match complete with player introductions and a national anthem. Family and friends were allowed to watch for only the third time this season.

They were treated to a show.

Sophomore hitter Kristen Carstens helped seal a back-and-forth first set with a powerful kill, while a team effort led a steamroll of the ladies in the deciding third set.

“We are just really grateful that the women give up their spare time to come and play, and we are grateful to have an opportunity to make it like a season, like a match,” Willis said.

Because of COVID-19 school-district travel restrictions all over the state, Kodiak’s 2020 season consisted of practices and scrimmages against the community team.

The community team is a talented collection of mostly former Bears who Willis has coached. The group of ladies have given Kodiak a chance at competition in a year where they were deprived of playing other high schools.

“It is something to look forward to,” Kodiak senior Kaylie Sockwell said. “We can scrimmage with JV and C team, but the competition level is a lot higher, and it makes us focus on being scrappy and playing harder.”

Even though Friday’s match was the finale against the ladies, Kodiak players asked to continue practicing. Why? Because they can and love to be in the gym.

“My heart has been broken a few times this season over what we are able to do and what we haven’t been able to do — they have just been such troopers,” Willis said. “I’m so proud of them. They can roll with adversity.”

After a practice last week, the entire program got together to eat pizza and watch a movie — two things they usually do while on road trips.

Willis said the girls talked about what they have missed this season, specifically, her hitting curbs with a minivan.

“That is where we do most of our bonding — we are sleeping in really small rooms,” senior Cyana Medrano said about not being able to travel this season. “I think we did do a good job of staying connected, even if we didn’t have travel trips.”

Several of Kodiak’s players had their spring sports season canceled and were ecstatic to have the opportunity to start and finish the volleyball season. The season began with the prospects of playing a Northern Lights Conference schedule, but as COVID-19 cases continued to rise, those hopes were slashed.

Sockwell missed out on a soccer season and reflected on what the volleyball season taught her after Friday’s match.

“You can be hopeful for things and not to be too disappointed when they don’t happen because you’re just grateful for what you had in the moment,” Sockwell said.

It has been reported by multiple media outlets that Lt. Gov. Kevin Meyer will seek an audit, or hand recount, of votes cast on Ballot Measure 2.

Malachi Maxon was arrested without incident at approximately 4:07 a.m. Monday. He is charged with killing his aunt and three cousins, who were 18, 10 and 7 years old.