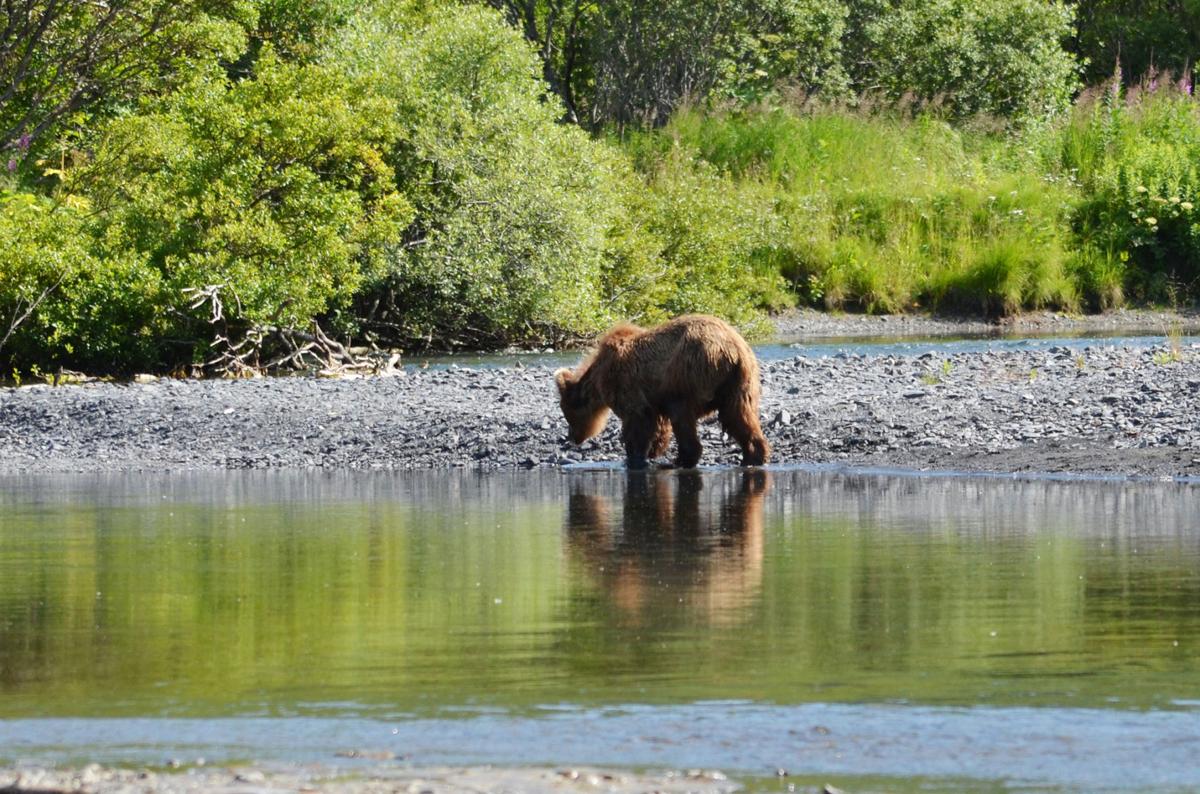 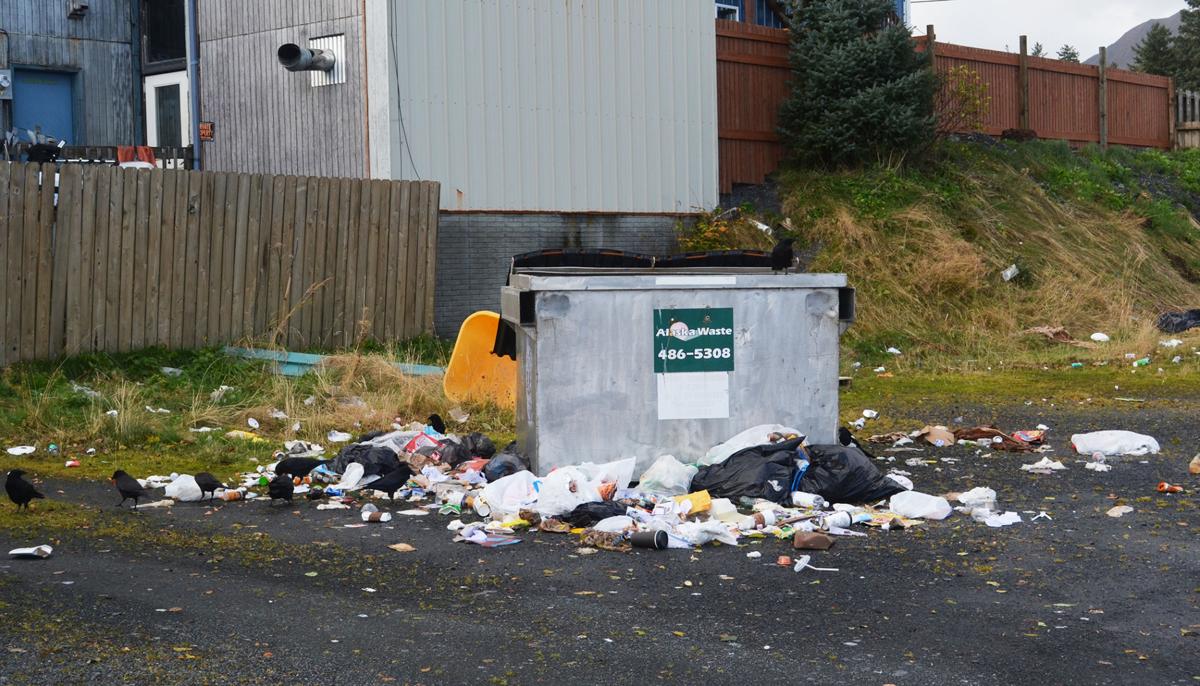 Dumpsters across the City of Kodiak (like the one above, located on Selig Street) are being regularly raided by bears in recent weeks.

Dumpsters across the City of Kodiak (like the one above, located on Selig Street) are being regularly raided by bears in recent weeks.

KODIAK — Kodiak is seeing a higher than usual level of bear activity on the road system, which has seen residents take to social media with photographs of broken fences and garbage scattered across front porches. For one local rancher, however, the impact of increasingly brazen bears has been more significant.

Chris Flickinger, who owns a cattle ranch out near Pasagshak, claims that he’s lost over 30 animals this year to bear attacks. In a message sent to the Kodiak Daily Mirror, Flickinger wrote that, last spring, the ranch lost 22 baby calves, two grown cows, two bulls, and four yearlings. Additionally, another cow and bull were injured, but survived.

Over the past two weeks (during which time, a number of bears have been very active in and around the City of Kodiak), Flickinger said he’s lost another cow, a bull and two more calves out at Pasagshak.

He said he didn’t see any of the attacks, but instantly knew that it was a bear.

“They usually do it in the middles of the storms when it’s late at night and raining,” said Flickinger. “It’s usually the young bears – I call them teenagers – that we seem to have the problems with.”

While losing the occasional animal to a bear is not uncommon for a ranch on Kodiak Island, Flickinger said the number of animals taken this year was well above average.

“That’s one of the bigger hits we’ve taken in a while,” he said. “We did lose about 25 in one night in February about 18 years ago. It was just one bear and he was just glory killing, he didn’t eat nothing.”

While his herd remains 250-animals strong, Flickinger said the financial impact of losing over 30 cattle is large. According to Flickinger, the bulls are worth $1,500, the bred cows are worth $2,000 and the calves are worth $800-900.

Flickinger said that in recent years, he’s seen an uptick in the number of bears on the road system.

“When I first got here, you could drive to town and you’d never even see one,” he said, “and now you see five or six just on the way into town.”

He added that, sometimes the only way to protect his herd is to sleep in the animals – which they did this past Spring, after so many cattle were killed.

“Last spring we were pretty much up there in shifts,” he said. “We didn’t sleep much last spring.”

When Flickinger does encounter a bear, he’ll try to scare it away, but occasionally has to resort to shooting one, which is permissible if the situation meets the criteria of the “defense of life or property” law. According to the Alaska Department of Fish and Game website, “You may kill a bear in defense of your life or property if you did not provoke an attack or cause a problem by negligently leaving human or pet food or garbage in a manner that attracts bears and if you have done everything else you can to protect your life and property.”

Flickinger said he hasn’t been forced to shoot a bear in over a year and the last time, “it was in broad daylight.”

This was corroborated by local Alaska Wildlife Trooper Sgt. Shane Nicholson, who said that Flickinger communicates with AWT regularly.

Nicholson, however, could not confirm Flickinger’s claim over the number of animals he’s lost this year, because Flickinger doesn’t always notify AWT when his herd is attacked by a bear. Nathan Svoboda, a biologist with the Alaska Department of Fish and Game said that this is an issue.

“If he’s claiming that he’s had 20 or 30 dead cows this year, he needs to call the troopers or fish and game and report it to us,” said Svoboda. “It’s up to him if he wants to report it or not, but if he has a bear problem with his livestock, he should notify us.”

Svoboda said that anyone whose animals are being injured or property is being damaged should report it, so that there is a record that they’ve had problems with an aggressive bear. That way, if a bear is shot in “defense of life and property,” there is already a string of evidence to help show that the action was warranted.

Meanwhile, residents of the City of Kodiak continue to see the impacts of having a number of hungry bears roaming around town. Various locals have expressed their grievances on Facebook, with residents posting photographs of the contents of dumpsters scattered across roads and destroyed garden fences.

The message from local law enforcers has remained the same: Secure your garbage and don’t leave attractants lying around your property.

This advice is as much for the bears’ wellbeing as it is for residents’ safety, a point that Local Alaska Wildlife Trooper Sgt. Todd Mountain made in a comment on a Facebook thread discussing the shortcomings of the trash roll carts that are given to residents within city limits.

After residents bemoaned the city’s deployment of roll carts, which, for bears, are easily to get into to raid, Mountain posted a photograph of bear scat that was interlaced with plastic bags and other pieces of trash.

“This is what it does to bears,” he wrote. “Please take your trash to a dumpster or straight to the dump, at least for the next few weeks.”

Alaska Chief Medical Officer Anne Zink said during a news conference Monday that no steps are skipped during the clinical trial process for the COVID-19 vaccine.

Proposals being presented to the school board take into account the school district’s status as operationally high risk for virus transmission. But some plans don’t fully comply with state and federal guidelines for virus mitigation at schools.

Bolger is the first person to have been appointed to all four levels of the Alaska judiciary.