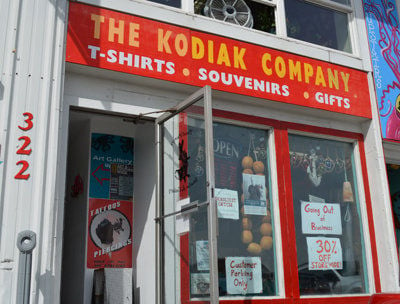 "Going out of Business" signs hang in the windows of the Kodiak Company store Wednesday on Shelikof Street. Owner Bronwyn Lyman plans to close the store after 3 1/2 years. (James Brooks photo) 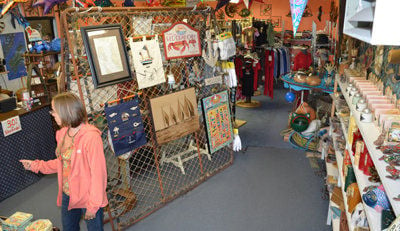 Bronwyn Lyman, owner of the Kodiak Company gift store is surrounded by products for sale in her store on Wednesday as she talks to a customer about the store going out of business. (James Brooks photo)

"Going out of Business" signs hang in the windows of the Kodiak Company store Wednesday on Shelikof Street. Owner Bronwyn Lyman plans to close the store after 3 1/2 years. (James Brooks photo)

Bronwyn Lyman, owner of the Kodiak Company gift store is surrounded by products for sale in her store on Wednesday as she talks to a customer about the store going out of business. (James Brooks photo)

KODIAK — If a buyer doesn’t step up by mid-September, Kodiak Company gift store on Shelikof Street will be no more.

Owner Bronwyn Lyman has begun a storewide clearance sale and said she intends to close the 3 1/2-year-old store after the final cruise ship visit of the season.

The reason isn’t financial — the decision to close the store came during a family vacation earlier this summer, Lyman said. It was the first significant time she’s had with her children since the store opened, and she said it made her realize how much she was missing.

“I have another business and two kids and family has to come first,” she said.

For Lyman, running a store, raising two kids and managing a bed-and-breakfast meant sacrifices had to be made.

“It’s always a sign on the door: ‘Be back in 20 minutes, picking the kids up for school,’” she said. “In the summertime, you really need to be open seven days a week.”

She began looking for someone to buy the store last year, but no one followed through.

“The people who were interested couldn’t take over for the same reasons; they all have jobs,” she said. She attempted to sell the store for $1, plus the cost of assuming the store lease and inventory, but there were no takers.

Lyman said hiring a store manager isn’t an option, either.

The store has been operating for almost four years, but it’s only in the last year that it has started to break even, thanks to increased tourist traffic.

“Holland America didn’t have buses, so everyone walks (from Pier 2),” Lyman said, something that’s boosted businesses along Shelikof Street.

Lyman said she will continue to operate Bev’s Bed And Get Your Own Darn Breakfast B&B, and giving up the store will allow her to do more volunteering with the Coast Guard Auxiliary and her church’s youth group.

Even if no buyer steps up, Lyman said she will save some of the store’s inventory for the annual Kodiak Christmas Bazaar and for sale at next year’s Crabfest. Without the store, however, her selection will be limited.

“It’s going to be a bummer for some people at Christmastime,” she said.

To move inventory, the store is offering 30 percent off everything, and Lyman said she will be happy when everything is over.

“Sometimes family is more important than money,” she said. “The world would be nicer if everyone realized that.”