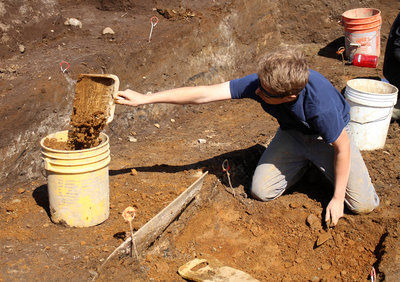 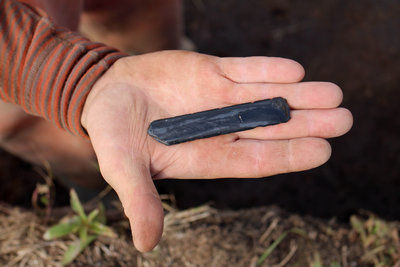 The Alutiiq Museum’s community archeology dig is half way over, and they’ve already dug up quite a few artifacts and are excavating a small house at the head of Womens Bay.

The house is about 300 years old, according to the museum’s curator of archaeology Patrick Saltonstall.

The house is unusual in that it’s small, appearing to be used by only a single family, unlike winter villages with large houses with siderooms for several families.

Saltonstall said this is only the second house of this type to be excavated, and the Alutiiq museum excavated the first one as well, located near the outlet of Buskin Lake.

“It probably wasn’t a winter village or a settlement type thing, it’s some sort of camp and we’re trying to figure out exactly what they were doing,” Saltonstall said.

So far, they’ve found a lot of bayonets and hunting gear, which Saltonstall thinks means it could have been a seal hunting camp.

The excavation site is located near Salonie Creek on a small bluff. Now, the area below the bluff is full of trees and grass with Salonie Creek running through it.

“There are some fish, but it’s not the biggest run in the world, so why would you have people living here for 7,000 years?” Saltonstall said. They’ve also found campsites across the small valley on the bluffs on the other side. “What we think now is there might have been a lake here and so the seals would follow the fish up.”

It’s important to Saltonstall to excavate these smaller sites. He said archaeologists often look at big sites, like winter villages, and while those are important too, the smaller sites help show a bigger picture of how people used the land, and that understanding has changed with local excavations.

“From 4,000 to 7,000 years ago, our conceptions used to be that they were sort of mobile, people had tents and they just traveled across the landscape, here today, gone tomorrow somewhere else chasing the resources, but what we’re finding is they were much more focused,” Saltonstall said. “Probably there was a band of 40 or 50 people, and they stayed right around in this area the whole time and had a winter village and then they had camps for various things. They were far more focused in one bay than we used to think.”

One of the exciting pieces they’ve found is part of a micro blade. It’s a knife made from Alaska Peninsula rock using Siberian knife-making technology.

“You only find it in the oldest sites in Kodiak, so it indicates that we have some stuff that’s really early,” Saltonstall said.

The diggers also found a small side room connected to the house they’ve been digging on, and have begun to excavate another six by six square next to the first one.

So far, the side room has been partly dug out and the topsoil and layer of 1912 Katmai ash has been removed from that second square.

Saltonstall said the site has been full of surprises. They expected to find fish camps and not much material older than 2,000 years.

“We found a lot more hunting gear than fishing gear so it tends to be much more focused on sea mammal hunting than we expected,” Saltonstall said.

“We are writing a chapter on how the Alutiiq used one area. That’s very important.”

Saltonstall already plans to come back to this site for next year’s community archaeology dig.