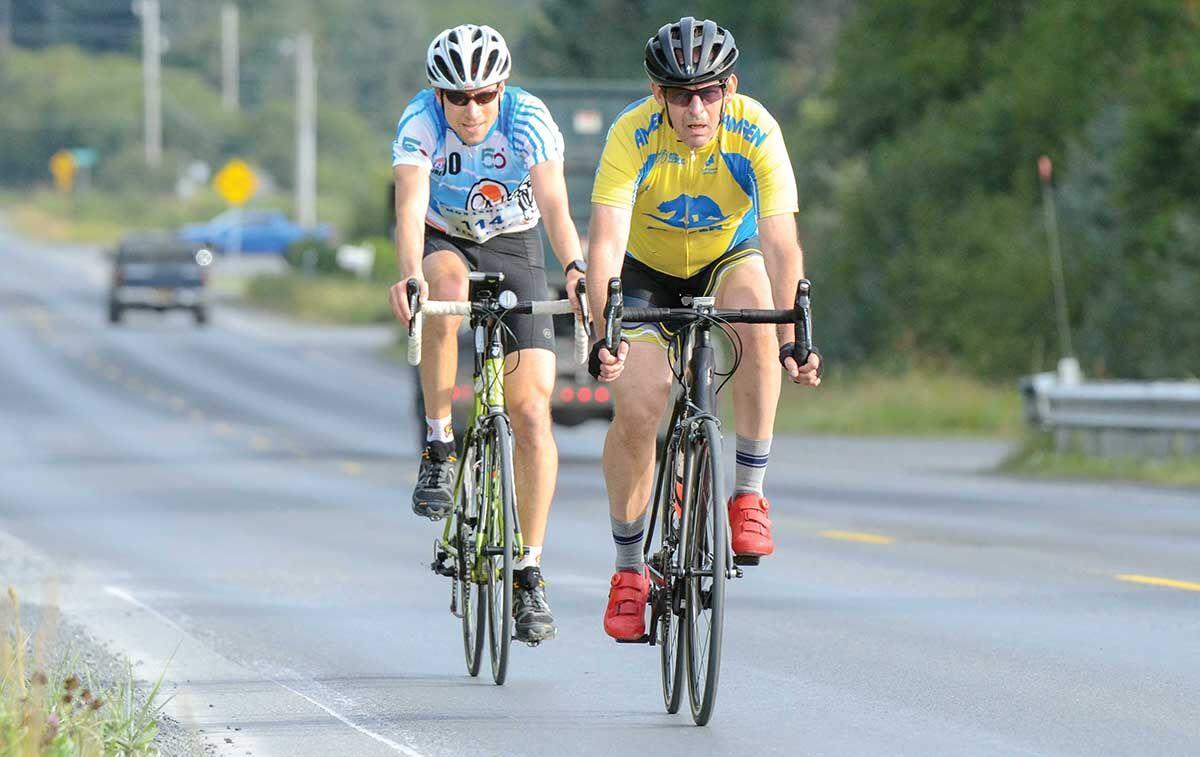 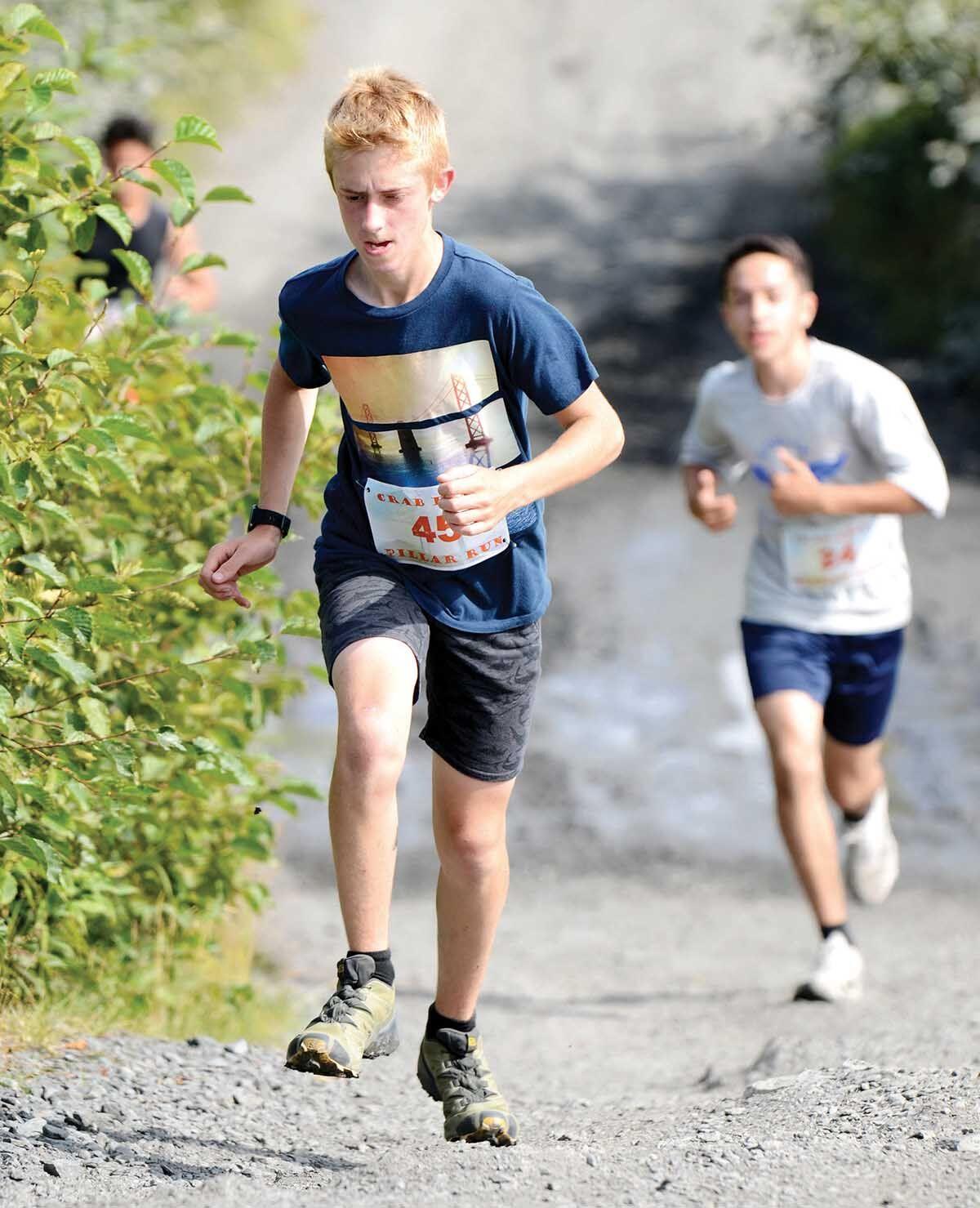 Runners compete in the Pillar Mountain Run on Saturday.

Runners compete in the Pillar Mountain Run on Saturday.

After one of the most epic Crab Festival bike races in recent memory, winner Douglas Long had this to say to runner-up Curtis Mortenson: “You made me vomit.”

Yep, it was precisely that, a physically draining sprint to the finish.

In a battle that saw back-and-forth jockeying for the lead, it was Long who fended off Mortenson to win the 21.04-mile Monashka Bike Race on a calm Saturday morning that was perfect for cycling.

The finishing times couldn’t have been any closer: Long’s winning time of 1 hour, 4 minutes, 27 seconds was only .02 ticks better than Mortenson.

Everybody in town is familiar with Mortenson, a legendary runner and hoopster who graduated from Kodiak High School in 2001. But, who is this Douglas Long fellow?

“He is a ringer,” third-place finisher Richard Saltonstall said.

Saltonstall, last year’s winner of the Crab Fest bike race — Pasagshak to Kodiak — found out quickly that Long was the new kid on the bike. Saltonstall set a speedy pace from the start, but not fast enough to drop Long, who sported a yellow jersey for the race.

“He took off really fast — faster than I would have started the race, but I wanted to keep up with him,” Long said.

Saturday might have been Long’s first Kodiak race, but the 53-year-old is no stranger to competing. He has been in races all over the globe, and has been riding on The Rock since February when he was hired as the editor of the Kodiak Daily Mirror.

“I’ve been cycling all my life. I started racing when I was 15,” said Long.

In high school in Pennsylvania, he chose to focus on cycling instead of running. He longed to be a sprinter on the track team but later discovered his slow-twitch muscles were better suited for endurance sports.

“I was told by multiple people that I could (do both), but would probably suck at both. This was in the ’80s, so triathlons weren’t a thing,” Long said.

A cycling career was born, one that eventually led him to being a category 2 racer — there are five categories in cycling, with the first level being on a national scale. In his prime, training six hours a day, he cycled against the top professionals in the sport.

“I could ride with them, but I was always pack-filler,” he said.

His racing savviness showed, such as when he drained his water bottle near the end of the race to lighten his load by a few ounces. That move might have won him the race as he had just enough speed left to stay in front of Mortenson.

The battle between Long and Mortenson started on the Monashka climb headed back into town. Having passed Saltonstall, Long thought he had dropped his closest competitor. Wrong. Mortenson, using his runner’s endurance, used a spinning technique on the uphills — a low gear and rapid pedaling — to take over first. The two alternated the top two spots the remainder of the ride.

Long took the lead for the final time on the last hill before the finish.

“The way I knew he was behind was there was a truck turning left. He waited for me and then I saw he turned right after me. I was like, ‘Wow, the other guy must be far enough behind,’” Long said. “Then he started catching me again, so I really cranked it up this hill, came around and spewed my Gatorade at the finish line.”

Saturday was the first time Mortenson had competed in a bike race. He had done triathlons, but never a pure cycling event. He has been nursing a foot injury this summer, which has led to more time on a bike than running.

“I felt like downhills and flats he would get me and uphills I could catch him,” Mortenson said. “From the dump to Mill Bay, I was trying to gap him, but he pulled up beside me, and I knew it was going to be a battle all the way into town.”

Mortenson said Long pulled away near the Providence hospital and was reeling him in near the end but ran out of hills to climb.

“It was good to have somebody out there, and to have somebody push you,” Mortenson said. “It is different racing on a bike than running. The drafting is so much more significant. I realized I made a few dumb moves … it is a different type of racing.”

Road construction forced the City of Kodiak Parks and Recreation to forego the traditional Pasagshak to Kodiak route for the Monashka course. The new course, yet, shorter, featured an intense set of hills that resulted in an elevation gain of 1,800 feet. The race started and finished at the armory across from Main Elementary. In between, the 13 riders cycled to White Sands Beach and back.

“It’s a fun course but also pretty difficult. There aren’t many flat sections, so you’re either grinding uphill or flying downhill,” said Long, whose average speed was 19.3 miles per hour.

Betsy Lund, a former editor at the Kodiak Daily Mirror and five-time winner of Kodiak's Earth Day Triathlon, won the women's field with a time of 1:11:13. She finished eight minutes ahead of runner-up placer Kathryn Symmes, who also placed second in the Pillar Mountain Run later that day.

Sue Zimmerman won her second Pillar Mountain Run title with a time of 1:29:12. Her first title was in 2016.

The Pillar Mountain Run course was also changed this year. Instead of starting and finishing downtown, the race started and finished at the armory.

Thanks Derek. It was fun to hear how the ride played out after they were all out of sight.